UNICEF Georgia: elevated levels of lead found in blood of 41% of children in study

Elevated levels of lead have been found in the blood of 41 per cent of children who participated in a large-scale study in Georgia, conducted with the support of the United Nations Children’s Fund (UNICEF) in 2018.

Although there is no exact measurement as to acceptable levels of lead, the World Health Organization (WHO) says up to 5 mg is permissible per 100 ml of blood.

• Georgian social workers: the system is in a state of crisis

• Six facts dispelling the ‘cult of children’ in Georgia

In Georgia, 1,578 children from two to seven years old were studied. The samples were random. The results are as follows: 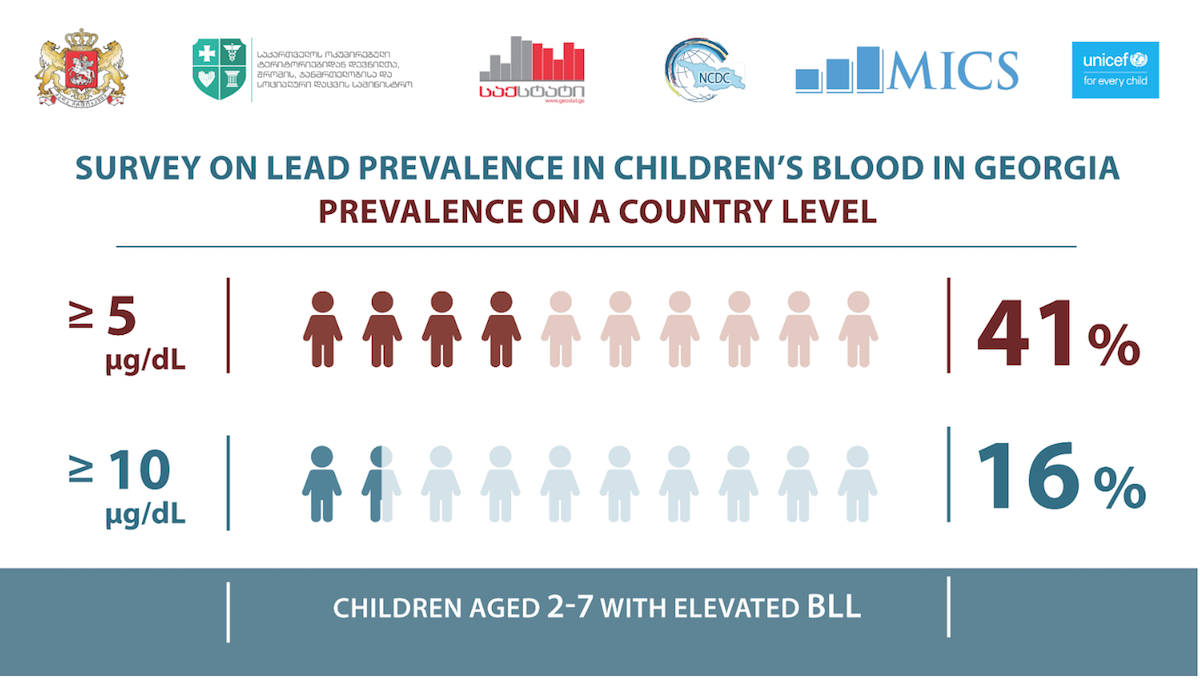 The picture was different in the various regions of Georgia.

The worst indicators were found in Adjara: in 85 per cent of the children studied, lead content in the blood was 5 mg or higher.

The best indicators were in Kvemo Kartli, where 5 mg or more of lead per 100 ml of blood were found in only 18 per cent of the children studied. 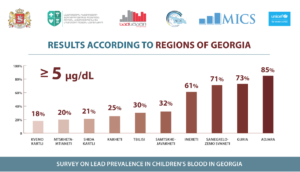 It was the first time that a study of this scale has been performed in Georgia. It was organized by the State Department of Statistics and the National Centre for Disease Control and Public Health, with the support of UNICEF and nine international donor organizations.

The collected blood samples were sent to the Italian National Institute of Health (ISS), a leading medical research institution in Europe.

“We appreciate the acknowledgement of the problem by the Georgian government, as well as the government’s strong commitment to undertake efforts to develop short-term and long-term response strategies and actions. Identification of the sources of lead exposure should be the next step in addressing the problem,” UNICEF Georgia head of mission Gottfried Hanne said.

The Georgian Centre for Disease Control says several steps have already been taken to solve the problem.

In particular, on 19 April 2019 a government guideline was issued on The Early Detection and Regulation of the Toxic Effects of Lead Exposure in Children. Specific recommendations have already been approved on how to detect elevated levels of lead in a child’s blood and what actions should be taken next.

Sixteen children who had more than 30 mg of lead per 100 mg of blood were taken under the supervision of a joint medical group established by the Centre for Disease Control, Iashvili Central Children’s Hospital and the State Agency for Environmental Protection. The children are still being studied, whereafter a decision will be made on what the treatment should be.

The government is also reported to have begun work on a comprehensive state programme that will include measures to identify sources of elevated lead content and short-term, medium-term and long-term measures to neutralize, isolate and purify lead-contaminated areas. Part of the programme will be measured to prevent the introduction of lead-containing products onto the market and an information campaign to inform the public.