Historic Shatili village – how Georgia’s mountains have emptied of people

Up to 70 percent of the territory of Georgia is mountains.

In recent decades, people have gradually left these regions.  Along with difficult environmental conditions, those living here are fleeing from unemployment, poverty, impassability, outdated infrastructure, a lack of schools, kindergartens and hopelessness in general.

The government is trying to stop this process.

On how – in our report from Shatili, an ancient village high in the mountains, in the Khevsureti region, on the northern slope of the Caucasus Range.

Four children come into a classroom about three square meters large – the room fills up immediately.

Ani, Mangia, Kote and Keti, who came to school today, are half of the students of the Shatili state school.

Ani is in the tenth grade, Mangia in the seventh, Kote in the ninth and Keti in the third.

• The oligarch’s hometown – the founding legend of the Georgian Dream

After the teacher congratulates the school on the start of the new school year, the children disperse to their different classrooms – one per class.

Keti is the youngest, this year she entered the third grade.

Her village, Mutso, is 12 kilometers from Shatili.  Sometimes she goes to school from home, sometimes she stays at school for several days.

In winter, when snow blocks the roads, periods of separation with her family are longer.

Keti’s family has no other choice – the school in Shatili is the only one within a radius of 50 kilometers.

A few days before the start of the new school year, the sound of a hammer knocking is heard at the Shatili school, it smells of paint and building materials.

The Shatili school has been in need of repair for several years.

Because of the broken roads, even the delivery of building materials to this village is a serious problem.

– Will guests come to the opening?

– Is the governor coming?

– Are the journalists here?

The repair at the school, as well as the arrival of guests, is a big event here.

Only eight children live in Shatili and 11 in the surrounding villages, and all of them attend this school.

The bright brown-orange building of the newly renovated school seems to enliven the gloomy landscape, the brown towers and stone buildings of Shatili, and on the other hand it completely falls out place with  the rural landscape, as well as the bright T-shirts of tourists climbing among the towers.

This year, students were greeted by a renovated school building in which they would not be able to study chemistry, mathematics and physics – as school principal Makvala Daiauri told us, not all teachers can withstand the local hard winter.

Several teachers dropped out of the school and since then replacements for them have not been found.

Shatili is one of the most beautiful villages in the Pirikita Khevsureti region (Geo. Otherworldly Khevsureti) with old towers, medieval landscapes, ancient traditions that have been preserved only here, and beautiful nature.

Shatili is considered the center of the region – against the background of almost completely deserted and abandoned neighboring villages.

Eight families live here, there is a school, mobile communications and sometimes the Internet when they there is electricity.

For most of the year, electricity is given here for only about an hour a day.

The only transport to Tbilisi is a minibus.  And then only twice a week and only in the summer.

To get here from the capital, you need to cross the mountains, a deep gorge and one pass through the Main Caucasian Ridge, rise three thousand meters above sea level and go down the slope.  The road is unpaved, and sometimes has huge puddles.

In some places, the road along the slope of the gorge is so narrowed that you involuntarily close your eyes from fear.

From Tbilisi to Shatili, the road is only 140 kilometers long, but sometimes the trip takes up to seven hours.

Near the Datvijvari pass we caught up with a white minibus.

The minibus has stopped at a huge puddle that blocked the path.

Passengers lined up trying to get around it on foot.  Some get wet. The driver dropped off the passengers and asked them to overcome the dangerous section, being afraid to get stuck.

This minibus from Tbilisi delivers both passengers and supplies for the winter to Shatili.

In winter, the road almost entirely shuts down. In November, snowfall cuts Khevsureti from the rest of Georgia.  No car can reach Shatili, and even a helicopter must wait for the weather to fly there.

Nobody clears the road of snow until it melts in May.

Mikhail Chincharauli, a 61-year-old doctor from Shatili, is preparing to go to Tbilisi and compiles two long lists.

One is a list of foods for the family, and the other is medicines that will be needed in the winter.

Chincharauli has been the only doctor in Khevsureti for 20 years. He treats pneumonia, performs cecum surgery, and fractures and other similar ailments.

“I have 80 kinds of drugs that are needed here. I have to buy them to help those in need in winter. I have to treat everyone … Everything must last me until mid-May, until the road opens.”

In Khevsureti they say that in winter you need luck – so as not to get sick. In a truly hopeless situation, people ask for the help of border guards who call in a helicopter. 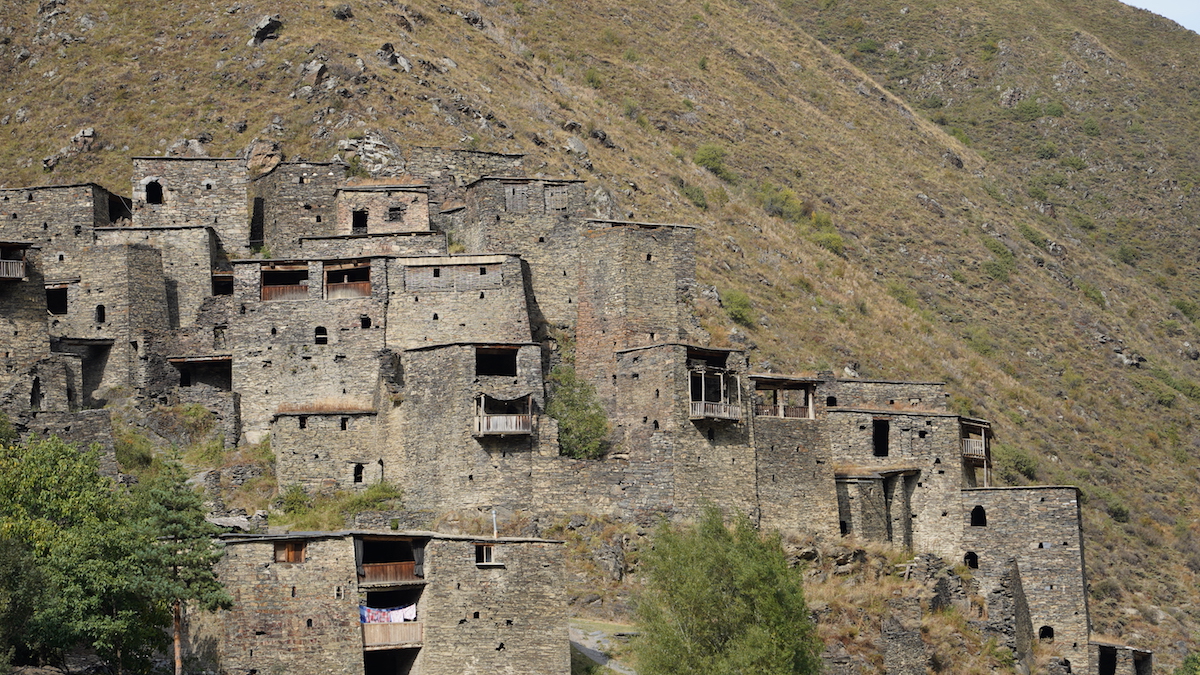 Throughout Georgia, villages are emptying for the same reasons: unemployment, poor infrastructure, difficult climatic conditions and a lack of water and electricity.

Traditionally, people in mountainous areas live off agriculture and livestock.

The families remaining in Shatili have cattle and sheep, which is the basis of their economy. Sheep flocks grazing on the mountain slopes are an integral part of the landscape.

There are no exact statistics on how many people have left mountain regions in recent years.  But the empty villages speak for themselves.

Migration from the mountains to the valleys did not begin yesterday. The process began back in the 1960s, and in the early 1990s it intensified sharply.

In Soviet Georgia, migration from the mountains to developing industrial cities – especially Rustavi and Kutaisi – was strongly encouraged and promoted, including in feature films.

On January 1, 2016, the Law on the Development of Mountain Regions entered into force, which was adopted with the aim of stopping the mass exodus of mountain residents.

The law offers social and economic benefits to people living in the highlands.

For example, for each newborn, the family receives 100 GEL [about $34] every month for a year.

Pensioners receive pensions and social assistance 20 percent higher than other residents.  Teachers and doctors receive higher salaries than their peers in lowland villages.

The cost of utilities is partially paid for by the state.

Graduates of schools from the mountainous regions continue their studies at higher educational institutions for free.

It is beneficial to do business here: companies are exempted from taxes for 10 years.

One of the arguments of the initiators of the law was that as a result of migration, the unique Georgian mountain village and its local traditions are lost. 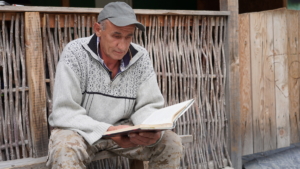 Eldar Daiauri returned to his native village of Mutso six years ago.

He is working on the restoration of this historic village.  He is also building his own house – with his own hands, the old-fashioned “dry way” – laying stones without using mortar.

We met him in the center of the village, sitting with a book of works of Virgil in his hands.

Daiauri tells us about life in Mutso.  He recalls that in his childhood, 16 families lived here.

Today, four families live in the unique medieval village-fortress.  One of them has never had electricity. The rest are provided electricity by the old hydroelectric power station.

The electricity is enough only for lighting and sometimes for TV.

To get in touch with the outside world by making a phone call, you need to walk 12 kilometers and get to the village of Anatori, where there is a signal.

There has never been internet in Mutso.

How to get people to return home?

In Shatili and Mutso, people say that the main thing that could keep people in the mountains is not free electricity, but the availability of electricity in general and other basic services and infrastructure – roads, water and so on.

Local people believe that this will help them attract tourists and create jobs.

There are several small hotels in Shatili. 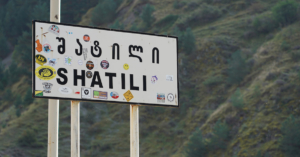 Many people from here who live in the city return in the summer to service tourist sites. However, so far there is not a steady tourist stream.

Tourists are scared away by the poor infrastructure, and, most importantly, the bad and dangerous road.

Mindia Chincharauli, a 24-year-old native of Shatili who is currently studying in Tbilisi, says that if there is a “development prospect”, he will definitely return to Shatili after finishing his studies and will be engaged in tourism.

Two years ago, he renovated his family hotel with government funding.

“Such projects would be the best support from the state for youth – financial support and benefits,” Mindia says.

The government says it is quite happy with the mountain law.

The Ministry of Regional Development and Infrastructure of Georgia told JAMnews that the law has thus far as a whole had a ‘positive impact on mountain residents.’

“At present, it has not yet been possible to completely solve all the problems, but access to education and healthcare, for example, has improved markedly,” the ministry commented.

“In general, increasing salaries, pensions and benefits is very good for the population. But this cannot change the situation in the mountains. I can’t name a single region where this law has changed anything significantly,” says Shota Buchukuri, a representative of the NGO Center for Mountain Development.

According to him, in general, changing the demographic picture is a long process. Therefore, the experts had no illusions that people would return to the mountains en masse in just two to three years.

The problem is different – in the first years after the adoption of the law, the government did not study and analyze its results and economic efficiency.

Buchukuri believes that “such assessments should be carried out annually in order to plan for the future.”

Moreover, the Georgian government does not even have data on how much the number of mountain residents in the past four years has changed.

The latest census was conducted in 2014. The next census is planned for 2022, and the Ministry of Regional Development believes that the effectiveness of the law can only be assessed after three years.

“The only thing we have is information on the number of deaths and newborns in the mountainous regions,” said Shota Buchukuri.

“If you compare these data, you will see that the number of deaths in these regions exceeds the number of newborns. Based on this, it can be assumed that the demographic situation continues to deteriorate.”