Summer’s the time to marry

In the villages around Lankaran in the South of Azerbaijan, weddings are rarely held in winter because many local residents’ relatives work and live in Russia. It is easier for them to come home in summer during the school break and vacation time. Moreover, fruits and vegetables are cheaper during this time of year.

And an even more obvious reason: in winter it’s too cold to have a feast outside under the open sky and you can’t have a wedding in a restaurant for the simple reason that there are no restaurants in villages.

The following story is about a wedding that took place in the village of Badalan.

No, this isn’t a wedding feast. Azerbaijani weddings are preceded by many rituals: relatives are introduced in a special way, express their agreement of the wedding and exchange gifts. This all can take several months. The last of the pre-wedding events is called the ‘toy akhshami’, or, ‘the night before the wedding’. This great ‘kabob’ was served namely during this event.

In Baku, ‘toy akhshami’ is a symbolic night mostly meant for men. But in villages, it has a more practical nature. Here relatives divide up assignments and decide who will be responsible for what at the wedding.

This tent is of the ‘luxury class’ – it’s not as colorful as some other tents who’s interiors are covered by carpets bearing the words ‘Be happy!’.

The next morning, the groom’s relatives get up at dawn as they have much to do. The tent with the wedding tables has been rented beforehand, and the price for the tent includes the grills, waitering services and tableware. The relatives of the groom cook themselves, because this is a so-called ‘boy wedding’. According to tradition, the relatives of the bride have already had their own wedding party, a ‘girl wedding’, in their native home.

It’s time to introduce the groom and bride: Parviz and Nigar, 28 and 25 years old respectively.

They didn’t meet each other in the traditional manner common in villages: they met completely independently, in Baku, where they both worked. The young couple lives there now. But they participated in all the wedding rituals ‘as per the rules’ and fulfilled the dreams of their relatives.

Special ‘ritual’ kerosene lamps are a remnant of sorts from Zoroastrianism, which was practiced in Azerbaijan in ancient times. And, of course, it is also the symbol of the hearth. These lamps and candles are carried by the bride’s relatives and friends when she walks out of her family home.

Returning to the rules: according to tradition, the bride comes to live in the home of the groom, bringing with her a dowry, including furniture, appliances, tableware, carpets, blankets and other items.

In earlier times, the dowry was even handed down as an inheritance from mother to daughter. From the moment of her birth, a mother would begin collecting items for her daughter’s dowry by herself. For well-off families, especially in large cities in Azerbaijan, this is already an outdated tradition as everything can be bought in a few months. But the tradition of turning the dowry into a subject of gossip still continues.

And so, on the day of the wedding, the relatives of the groom ceremoniously send themselves off to the bride in song. Having received the blessings of her parents, she walks out of her house under a koran which is held over her head by an elder of her family.

Red ribbons which fly everywhere, a decorated car that has come to pick up the bride and the piercing sounds of the zurna are all very important. Now everyone in the village will know that a bride is being given away according to the norms of honest people. 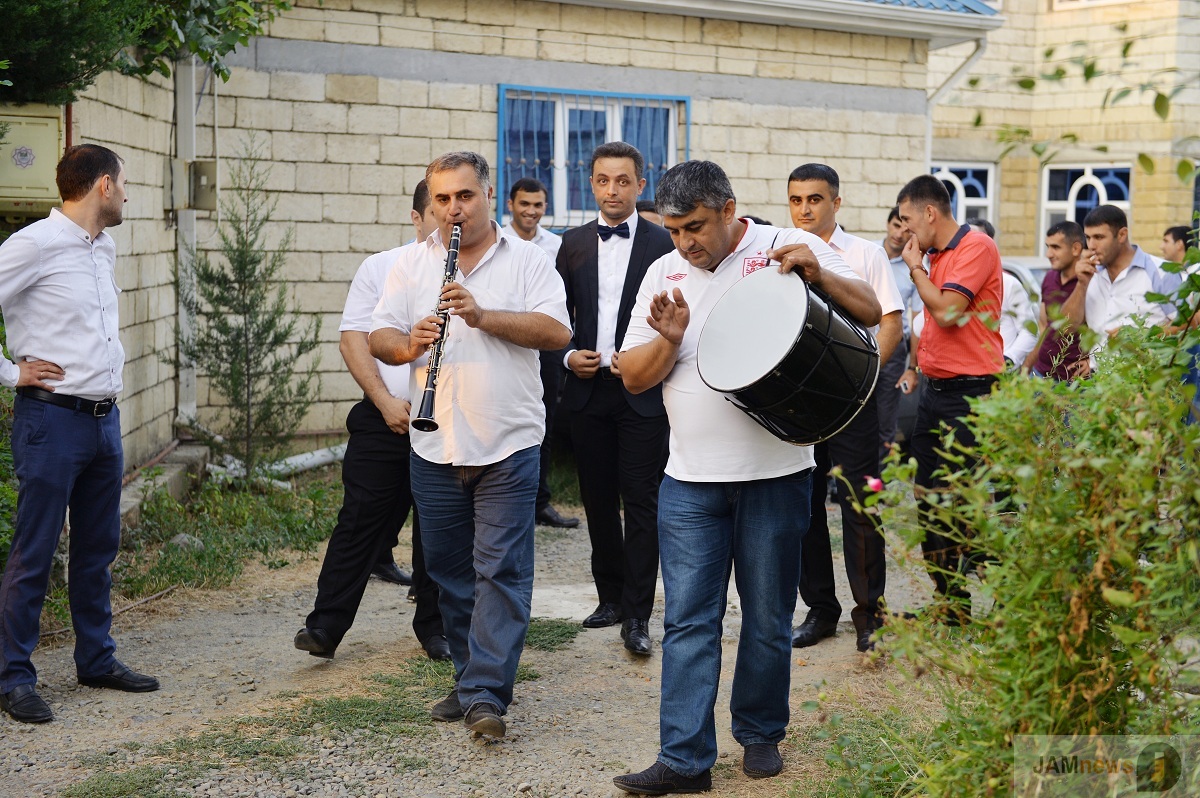 The black suit of the groom and the white dress of the bride are examples of the mixing of traditions that are characteristic of Azerbaijan.

In villages, there is still a custom of blocking off the road for the wedding accolade – young boys who block off the road are generally given money by the relatives of the groom.

And when the bride is brought into the home of the groom, she is doused in kisses and blessings. Small change, candies and rice are strewn over her head in the hopes that well-being blesses the home. A young boy is placed on her knee so that her first born will be a boy.

Then, the bride is left at home. The groom appears only at night while the guests enjoy themselves and have fun. Men and the groom spend their time in the tent while women around the tables in the courtyard.

Not quite how they imagined it - Azerbaijani IDPs’ return to Karabakh