Op-ed: When and why did bottled wine culture disappear in Georgia?

Georgians proudly call their country “the birthplace of wine”. However, many of today’s local traditions might cause one to doubt this statement.

JAMnews author Levan Sebiskveradze looks at what has happened to Georgian wine since the Soviet period up to the present, and why the wine-drinking culture has suffered in recent years.

Young people who never lived in the USSR have probably seen scenes of feasts in old Georgian films in which wine is bottled in jugs and bottles of various shapes and sizes.

Although wine was also poured into earthenware jars and glass decanters, traditionally the main vessel was still the glass bottle.

However, this is the very distant past of Georgian wine.

During Soviet times, the culture of wine in Georgia underwent serious changes. A new approach of fast and poor-quality production appeared which was adapted to the Soviet era.

• How Georgian wine has survived

• Op-ed: Nine things that might surprise a foreigner in Georgia

• Do you also remember seeing a giraffe at the Tbilisi zoo? How human memory works

People soon forgot the taste of old wines, the proper way to produce wine and the culture of drinking.

Traditions that appeared in Soviet times are so ingrained that people call them ancient Georgian customs. Unfortunately, many believe this to be the case today.

One change that was especially conspicuous is the rejection of the glass bottle, as glass made production more expensive.

The culture of drinking bottled wine was gradually forgotten. A drop in the quality of wine and its home-made aspect led to the consumption of wine in large quantities.

In those days, there was a tradition to drink wine from various, often highly unthinkable vessels, which was never a Georgian tradition.

Oh, the things they drank wine from!

The cold, dark and moneyless post-Soviet period – the 90s  in particular – stood out for its creativity.

People in the 90s drank wine from anything that came to mind – from children’s chamber pots (a toast to the future of the children!), to the shoes of one’s mother-in-law (a toast to mothers!).

In general, shoes were a very popular vessel for wine – for some, it still is. 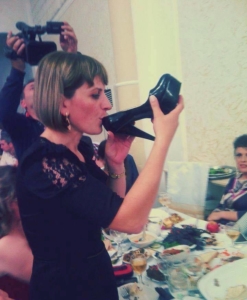 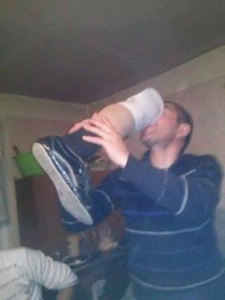 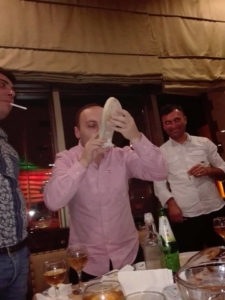 There were even more unimaginable cases.

For example, a tradition took root in the town of Vanya in Western Georgia where the owner of a house would go up onto the roof with a jug of wine and pour it down a gutter pipe, where the guest standing below would drink it from the spout.

We have historical cases of when wine was drunk from medical devices for blood transfusion (a toast to health), from a large syringe for livestock (a toast to fertility), and also from the muzzle of a loaded gun (a toast to ancestors).

Toasts were also made from trouser legs (to a man’s honour) or from a hollowed out watermelon, melon or pumpkin. 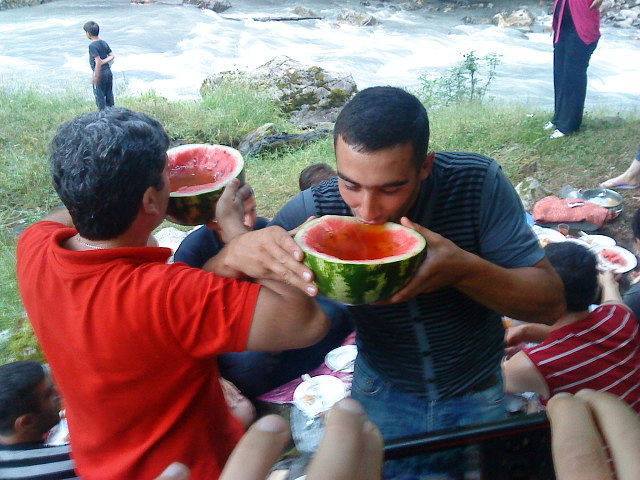 And even from a blender (a toast to friendship).

Georgian poet and writer Giorgi Leonidze tells in one of his stories how the bride’s braids are lowered into a wine cup, and then drunk from.
This scene should be considered one of the beginnings of the tradition of shocking drinking.
And this “tradition” has not disappeared yet, as some still resort to it today.

The 90s and wine “poured in the garage”

After the collapse of the USSR, things got worse.

In the 90s, the culture of drinking bottled wine almost completely disappeared and the whole country switched to drinking wine “poured in the garage” – that is, poured into plastic containers.

There was no electricity, no money – yes, people drank a lot. They drank substandard drink and drank to the level of unconsciousness.

This too, has become a Georgian “tradition”.

In the mid-1990s, several enterprises attempted to return to at least the external form of Georgian wine, and began to bottle it again.

However, after the collapse of the USSR, wine bottle factories closed in Georgia. Therefore, they were imported from Europe, Russia or Armenia.

The return of the bottle

Today, the Soviet tradition is slowly but consistently changing.

Winemaking has progressed significantly, but the economy still does not allow for it to develop further.

For example, winemakersseldom bottle wine for their own use, reasoning that bottling is expensive.

This is similar to the behavior of a peasant who prepares delicious and high-quality fruits for sale at the market, but won’t eat them himself because he’s afraid to lose out on a few pennies.

The fact that the significance of the bottle is not fully understood is also indicated by the fact that, today, only one bottle manufacturing plant exists in Georgia. Even some winemaking companies from abroad buy what they manufacture.

The tradition of bottled wine is, of course, not Georgian alone – this has been done in Europe and Asia for centuries.

The fact that glass containers are the best way to preserve wine is confirmed by finds from ships that sunk centuries ago. The bottled wine found is often still drinkable today but is very expensive.

The quality of wine in restaurants is still bad

Winemaking goes forward, but Georgian restaurants still leave much to be desired.

The number of wine bars and restaurants that have recently opened in different cities in Georgia indicate that the number of Georgian wine connoisseurs have increased.

You may often see an ordinary person buying wine not for the sake of a crowded feast, but for himself so that he can sip and drink it slowly.

However, it turns out that this very positive trend has not yet affected the quality of the wine offered by restaurants.

In the Guria, Imereti, Kartli, Samegrelo and Achara regions, and even in the traditional wine restaurants of Kakheti, they serve really bad wine.

The point is, again, money – even this wine has a customer, nonetheless.

When one goes somewhere to have dinner with a friend, one looks for the cheaper option.

However, it is not possible to blame only the economy for this bad taste.

In the past few years, major wine companies have signed exclusive supply contracts with restaurants.

Under the terms of the contracts, the menu of these restaurants can only display products of the wine company contractor.

Despite the fact that such contracts primarily harm consumers who simply have no other choice, many restaurant owners agree to such conditions, as companies supply wine at prices much lower than market prices, and restaurants get good profits from it.

Some experts also claim that the wine business in Georgia is hampered by “established gastronomic habits”. In particular, the fact that a feast is overloaded with a huge number of dishes.

Despite the fact that Georgians call their country “the birthplace of wine”, no one regrets spending money on food, while the majority do not want to spend money on good wine.

This is regrettable, given the best option would be to order just two or three dishes, and wash it down with a good Georgian wine.