Georgia goes back to the polls: all you need to know about today’s elections

Georgia will elect the country’s fifth president today in a second round of elections.

The tension is high: the difference between the two top candidates in the first round was less than a percentage point.

Though voters will not find the names of former president Mikheil Saakashvili or former prime minister Bidzina Ivanishvili on the ballots, the presidential election is a clash between these two leaders of Georgian politics, who for the last few years have been informally controlling the opposition and the government from behind the scenes.

Who’s fighting for the presidency?

Both candidates are former ministers of foreign affairs that served under the Saakashvili government.

Zourabichvili is Bidzina Ivanishvili’s personal choice, and Grigol Vashadze is the personal choice of Mikheil Saakashvili. The confrontation between these two leaders makes the presidential election particularly tense and intriguing.

Salome Zourabichvili is officially an independent candidate. However, she has received extensive support from the ruling Georgian Dream party, including administrative and financial aid.

Born in Paris, Zourabichvili is the granddaughter of political immigrants who fled from Georgia in 1921.

Zourabichvili served in the French diplomatic corps, and in 2003 was appointed the French ambassador to Georgia. In 2004 after the Rose Revolution took place in Georgia, ex-president Mikheil Saakashvili gave her Georgian citizenship and appointed her minister of foreign affairs in his government.

Zourabichvili did not serve long under Saakashvili. In October 2005, she joined the opposition, but failed to head up a serious party. She left both politics and Georgia and came back only in 2012, after billionaire Bidzina Ivanishvili entered politics. Throughout these years she openly supported Ivanishvili, though she did not become a member of the ruling Georgian Dream party.

Zourabichvili is a member of the Georgian parliament. While she officially entered parliament independently, she received strong support from Georgian Dream in becoming an MP.

Not every member of Georgian Dream was excited about supporting Zourabichvili, but given that she was Ivanishvili’s personal choice, few in the party had the courage to argue with him outright.

Zourabichvili was the target of a social media campaign, mostly because of her remarks about the August 2008 War. She said that Georgia started military activities and ultimately the war by reacting to Russian provocations.

The opposition, a number of NGOs and a large portion of the public, believe Zourabichvili’s statements are “anti-state” and reflect the Kremlin’s point of view. She is often called a traitor.

Grigol Vashadze is a member of the former ruling United National Movement party (UNM) of ex-president Mikheil Saakashvili, and is represented in the elections by the opposition Strength in Unity coalition.

After graduating from Moscow Institute of International Relations, Vashadze worked in the USSR Foreign Ministry for several years in the late 1980s.

He ended his diplomatic career in the early 1990s. After that he lived in Moscow, was engaged in private business and was also the impresario of his famous wife, the prima ballerina of the Bolshoi Theatre Nino Ananiashvili.

In 2004, Ananiashvili, at the suggestion of Georgian President Mikheil Saakashvili, headed the ballet troupe of the Georgian Opera and Ballet Theatre and in the same year received Georgian citizenship. Grigol Vashadze moved with his wife to Tbilisi.

In November 2008, Vashadze took up the post of Minister of Culture and Sports of Georgia, and in December of the same year he was appointed Minister of Foreign Affairs. Vashadze was still a citizen of Russia at the time, for which he received much criticism on many fronts.

Opponents of Vashadze cite his Russian past, calling him “pro-Russian” and a “KGB agent”.

Other opponents have pointed out that one of Vashadze’s PR men has a Slavic name – Vitaly Shklyarov, who worked for Vashadze in his election campaign.

Georgian parliamentary speaker Irakli Kobakhidze noted: “Vashadze worked at the Ministry of Foreign Affairs of the USSR. Now he has a PR manager by the name of Shklyarov. In my opinion, everything is clear.”

Vitaly Shklyarov is an American political scientist and a citizen of Belarus who has been living in Washington for the last 10 years. He worked in the elections in Russia with opposition parties, including in the campaign of Ksenia Sobchak, as well as in Europe and the USA in the campaigns of Senator Bernie Sanders and President Barack Obama.

Why are these elections important and how will they be remembered?

These are the last direct presidential elections

The country’s recently amended constitution defines the presidential term as six years, while in the past the president has served for five.

Moreover, this is the last time the public will vote directly for the president – the next time around, the president will be chosen by an electoral college.

A rehearsal for parliamentary elections

The coming to power of the opposition president would not mean a change of power – everything will be decided at the parliamentary elections to be held in 2020.

• Lessons of the Georgian presidential elections

The powers of the future president

√ represent Georgia in the international arena, but all steps must be coordinated with the government;

√ formally sign the appointments of the prime minister and members of the High Council of Justice;

√ the president cannot be arrested or prosecuted;

√ the question of the impeachment of the president can be raised on the consensus of one third of the members of parliament.

Political observers say that if the pro-government candidate fails to win the presidential election, this will be a clear message to the authorities that the population is dissatisfied with the policies of the ruling Georgian Dream party.

Both candidates have equal chances of winning

Never before has Georgia needed two rounds of presidential elections.

In the second round, Vashadze is counting on the votes of the entire opposition. He has already received the support of several opposition parties, including the second largest opposition party, European Georgia, which consists of former members of the United National Movement party, which broke away after a conflict with Saakashvili at the end of 2016. European Georgia won almost 11 per cent of the vote.

Zourabichvili, on the other hand, has the administrative resources and support of the ruling party.

According to a poll by the American company Edison Research conducted several days before the second round of the elections, Vashadze is leading with 52 per cent of the vote. The survey was commissioned by pro-opposition TV company Rustavi-2.

During the election campaign, both the opposition and the ruling party have played the Russian card against their opponents. Candidates and their supporters accuse each other of taking a supposedly pro-Russian position.

“I will not give Georgia up to Vashadze and Russia,” Zourabichvili said in her election campaign video.

“We cannot have a president who believes that Georgia has started the war,” says a voice-over in a Vashadze commercial.

Scaring the population with threats of destabilisation

This election will be remembered for its length, and the severity and aggression of the election campaign.

After the first round, the authorities identified a new strategy based on intimidating the population with the prospect of Mikheil Saakashvili and his party returning to power.

• Head of Georgia tells all before elections

The authorities have claimed on multiple occasions that “dark times”, civil war and chaos will return to Georgia should the opposition return to power. Other threats included political repressions and a 300% devaluation in the lari.

Posters and billboards have been hung up around the country with images of former government members with the words “No to evil!” 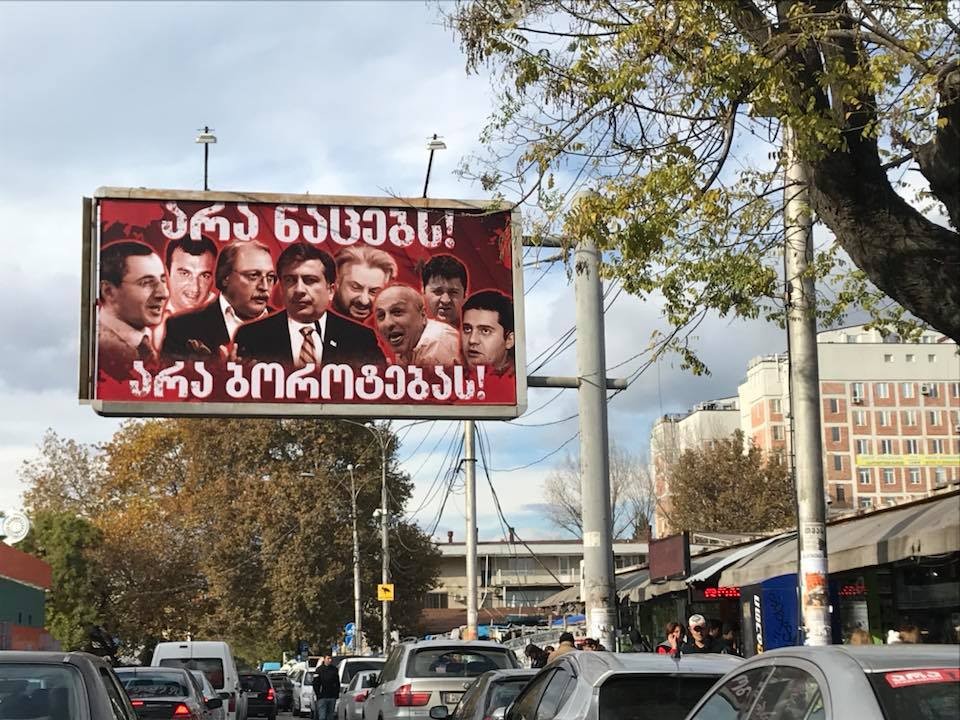 The opposition, on the other hand, has focused on poverty and unemployment, which has significantly increased in Georgia in recent years, and on the devaluation of the national currency.

Vashadze’s campaign ads feature Georgians claiming they have no money for food or medicine, and that their lives have changed for the worse in economic terms since billionaire Ivanishvili has come to power.

The opposition also focuses on corruption, showing the lavish houses of officials built over the past six years during their time in power.

Elections without a candidate

Zourabichvili did not make a statement or come into contact with journalists for several days once the results of the first round were published.

She also did not appear at concerts organised across the country for her, and only large posters with her image were hung out on stage.

Instead, members of the ruling party spoke to journalists.

That’s not all. After the first round, election posters appeared on the streets, in which under Salome Zourabichvili’s name, photos of former Prime Minister Bidzina Ivanishvili appeared, as well as photos of parliamentary speaker Irakli Kobakhidze and Tbilisi Mayor Kakha Kaladze.

Several hours before the start of the second round of presidential elections, non-governmental organizations (NGOs) released a report about the election period.

In the report, NGOs say that the unprecedented initiative of the authorities to cancel and pay off the debts of 600,000 Georgian citizens amounts to voter bribery. The report also notes that the second election campaign period took place in a rather negative atmosphere.

Observers sent by non-governmental organizations to the regional areas recorded several cases in which money was offered to the public in exchange for a vote in favor of pro-government candidate Salome Zourabichvili. In some regions, for example in Marneuli, foodstuffs such as potatoes and onions were distributed.

A few days before the election, NGOs received information that fake IDs were being printed, presumably for vote-rigging.

The report says that in the second round, the authorities made extensive use of government administrative resources in announcing initiatives aimed at ingratiating themselves with the people, such as higher salaries and social assistance, giving IDPs housing and various infrastructure projects.

Other important details and numbers

Elections were scheduled for Wednesday – a working day which was declared a day off on the occasion of the elections.

This is not the first time that elections are being held in Georgia in the middle of the week – the former authorities also called elections on working days, for which they were criticized by the then opposition which is now in power.

Due to the fact that this is traditionally a working day, it will be difficult to take part in elections for Georgian citizens living abroad. The Central Election Committee (CEC) decided that in polling stations outside Georgia, voting will continue until midnight local time.

On 28 October there were 3,518,877 eligible voters. One month later, the list had increased by almost 10,000 people to 3,528,658. The CEC says that the reason for the jump was the number of people who turned 18 and thus became eligible to vote, or that a number of people applied for and received identity cards.

The election will be observed by 48,500 local and 2,300 international observers.