The seventh presidential elections will be held in Georgia on 28 October to vote for the country’s fifth president. The electorate will have to make a choice between 25 candidates, almost half of whom are unknown to the general public. The approval rating for the rest of the politicians in the second half of the list does not exceed 11 per cent.

Less than a week remains before the vote, and the country is peppered with political posters. Here’s a look at the visual publicity strategies of the main candidates:

The richest political art can be seen in the election campaign of independent candidate Salome Zourabichvili. Her posters are everywhere: on the walls of buildings, in the subway, bus stops, on marshrutkas (minibuses) and the facades of high-rise buildings.

Running under election number 48, Zourabichvili, a former minister, is only formally an independent candidate – in reality she is the candidate of the ruling Georgian Dream party. 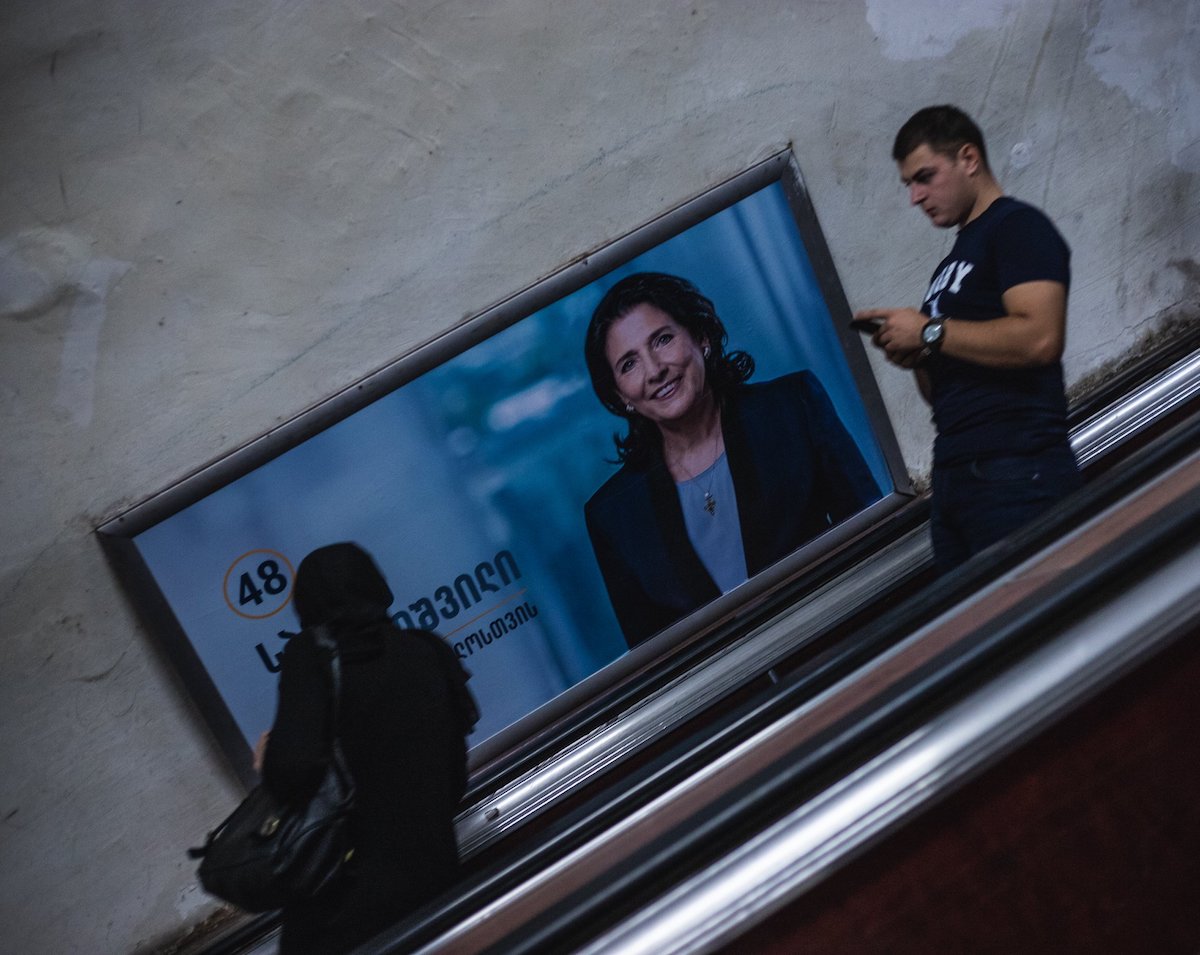 Businessmen and other citizens have donated about four million lari (about $1.48 million) to Zourabichvili’s campaign. This is more than the donations for the campaigns of the rest of the election participants combined.

Read also: Who is Georgian presidential candidate Salome Zourabichvili and why isn’t the public wild about her? 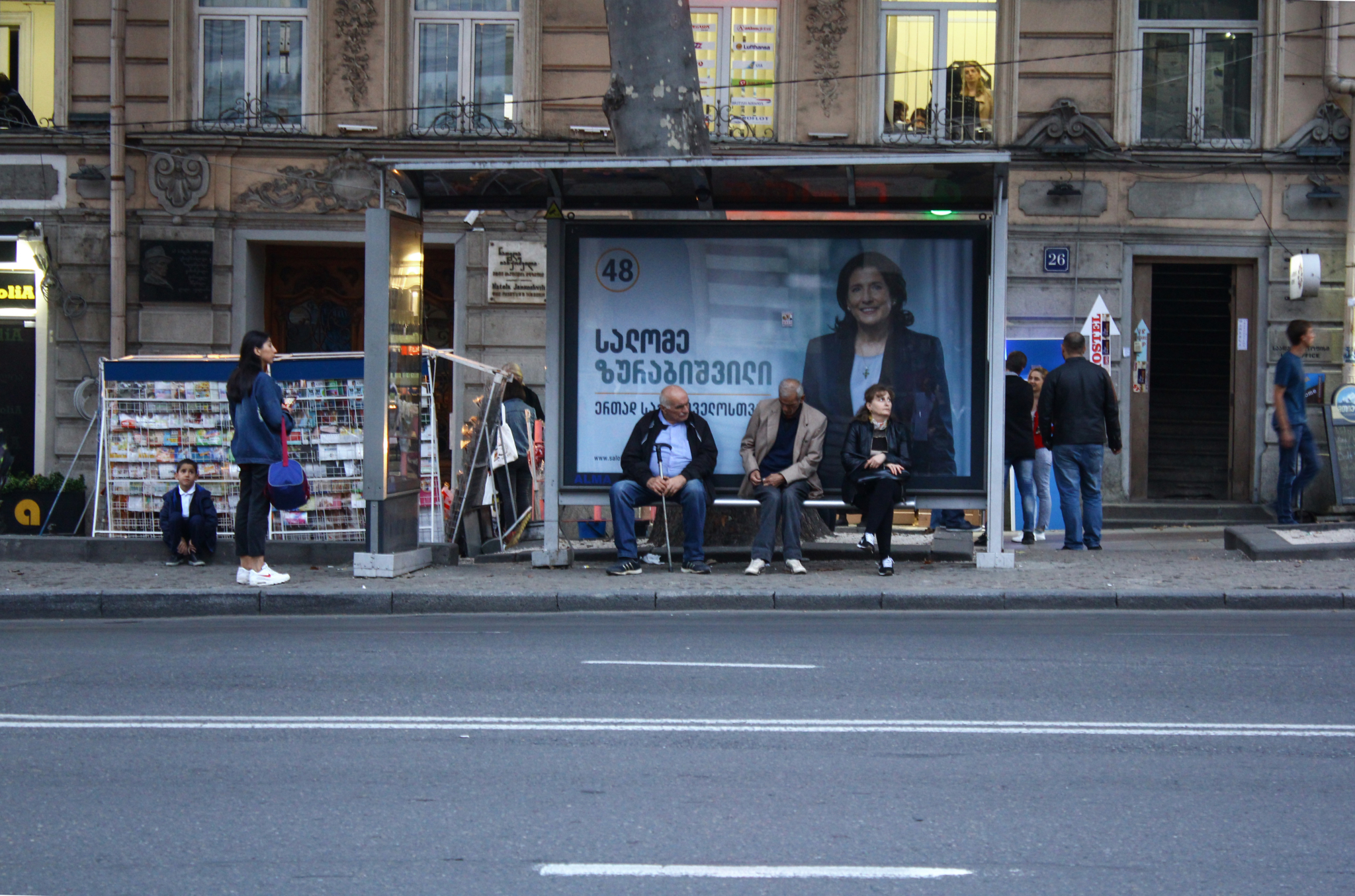 The authorities assume that Zurabishvili will win in the first round of vote. Pro-government surveys predict she will win 53 per cent of the vote.

However, along with extensive advertising, she is also the target of campaigns to discredit and lower her popularity. The time allotted to election participants for free political advertising has been used by the majority of candidates as an opportunity to criticise Zourabichvili.

The opposition’s television clips call for voters not to vote for the “traitor” Zourabichvili, who believes that Georgia started the August War of 2008 [ed. Zurabishvili herself made such a statement several months ago], and who does not speak Georgian well, given that she was born and grew up in France.

Grigol Vashadze is the most popular of the opposition candidates: like Zourabichvili, he is also a former diplomat and the former foreign minister of Georgia.

He is running in the elections as a representative of the United Opposition bloc, though he is in reality the candidate of ex-president Mikheil Saakashvili’s United National Movement.

His election number is 5: the traditional number of the United National Movement, and his slogan is “Together we can”. 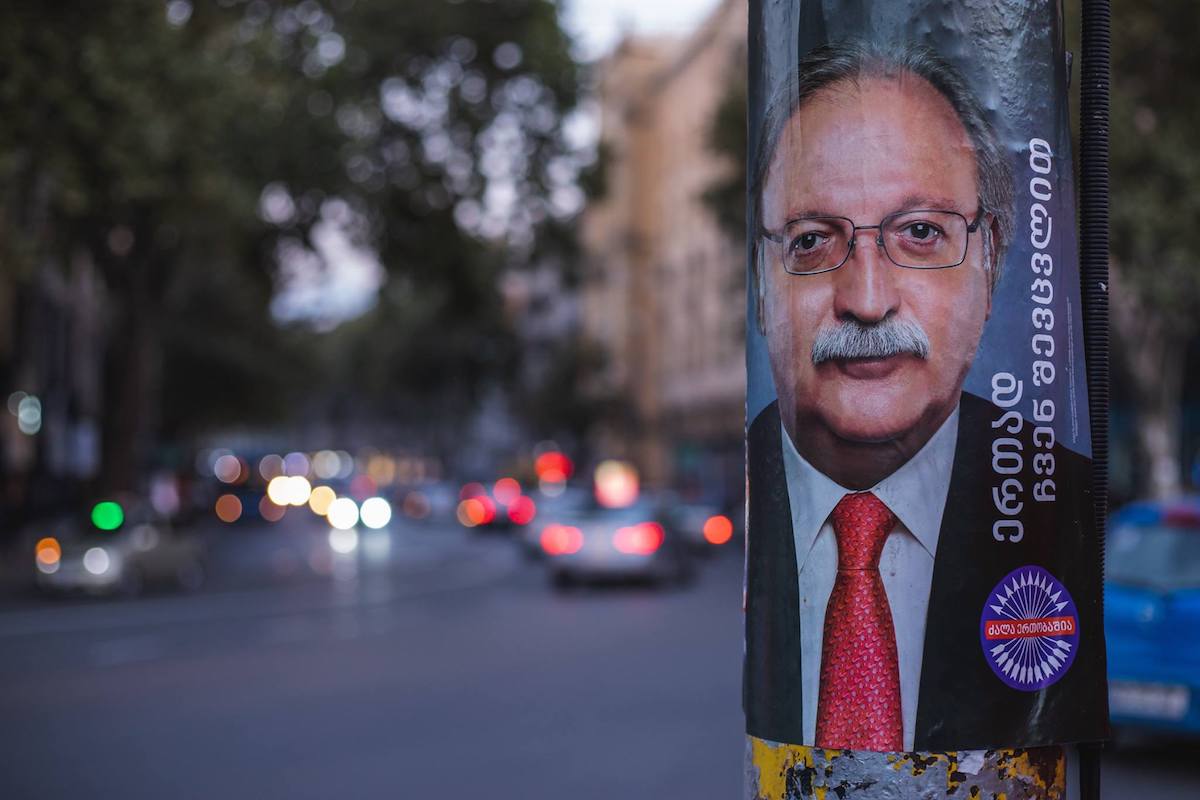 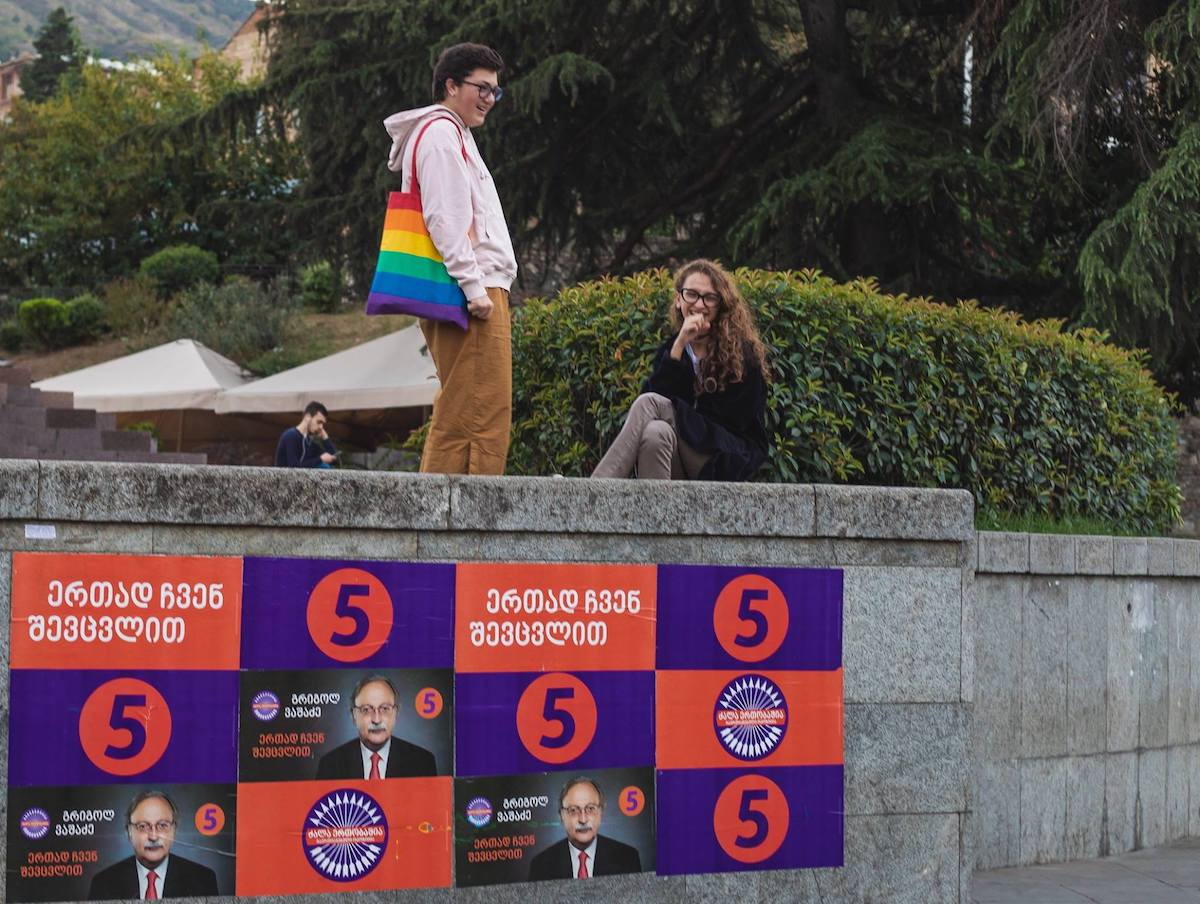 Career diplomat Vashadze is associated with Russia. He lived and worked in Moscow for many years. This part of his biography is used by his opponents against him: sometimes you can spot his posters smeared with the letters KGB. There are other posters in which Vashadze is depicted as being held in the hands of Putin. 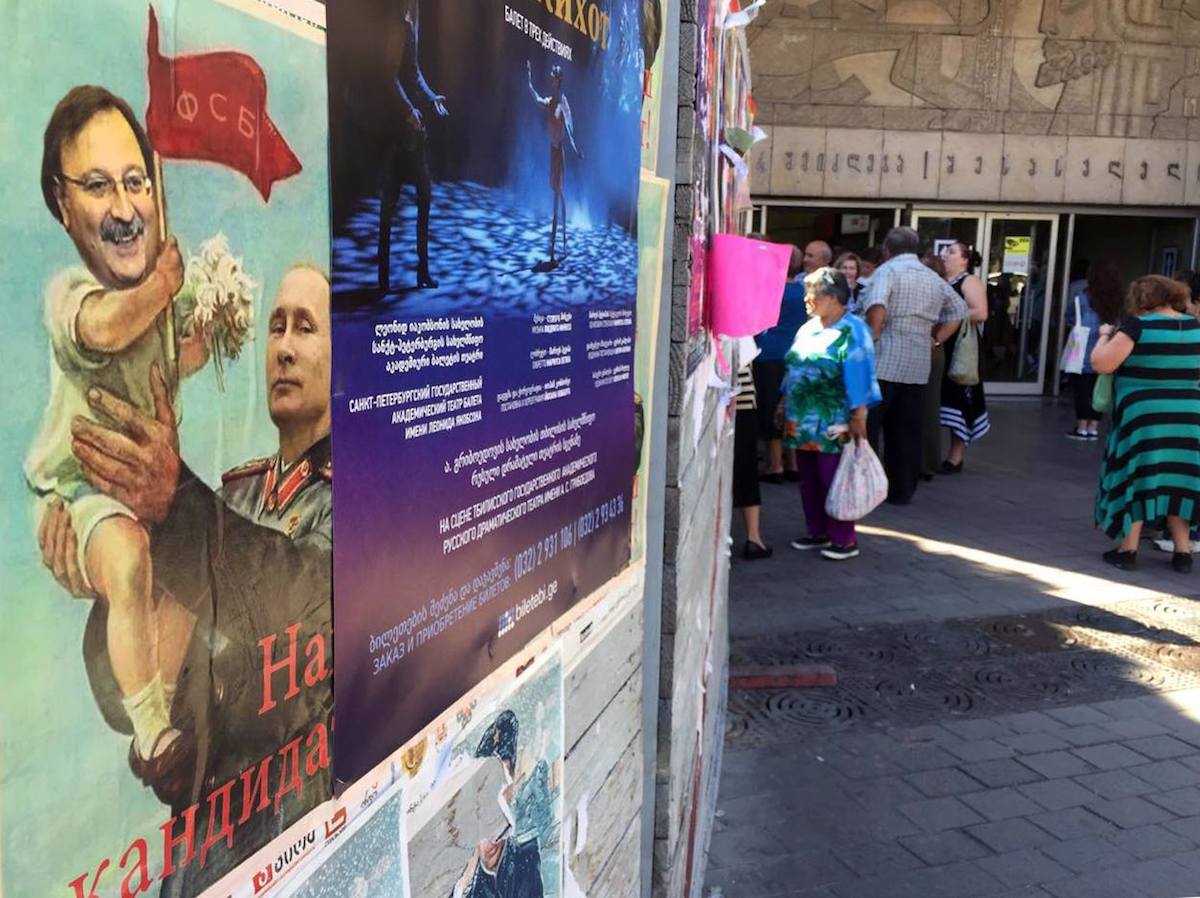 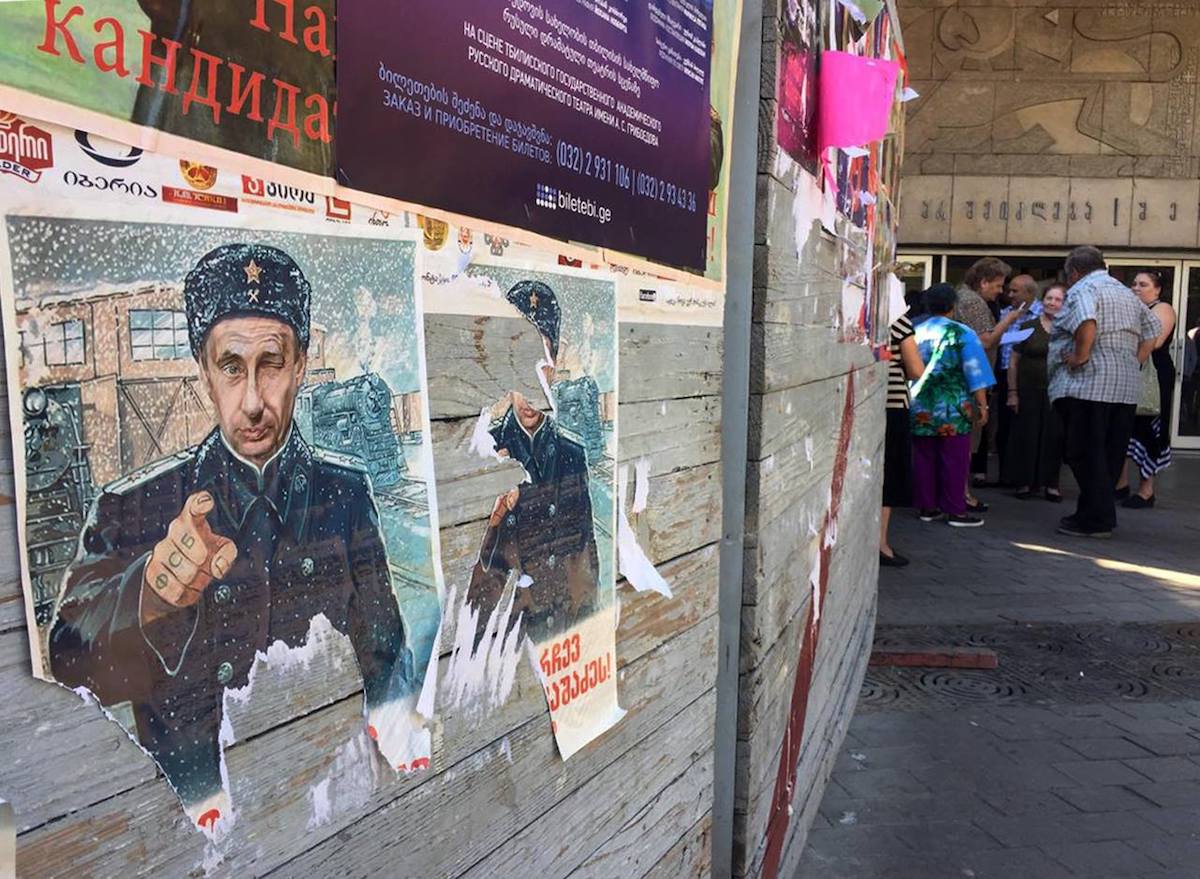 Another popular opposition candidate is David Bakradze from European Georgia.

This is not the first time posters with his image have appeared in Georgia: he ran in the 2013 presidential election when he represented the United National Movement. Much has happened since then: Saakashvili’s United National Movement has fallen to pieces, and Bakradze is now the head of one of the splinter groups, European Georgia.

His campaign number is 2. Unlike the United National Movement, his election campaign is not aggressive and is more restrained. His main promise to the electorate in the event of victory is an increase in pensions. His electoral slogan is “A step towards Europe”. On the street you can also find posters which have been defaced or ‘decorated’ in other creative ways. 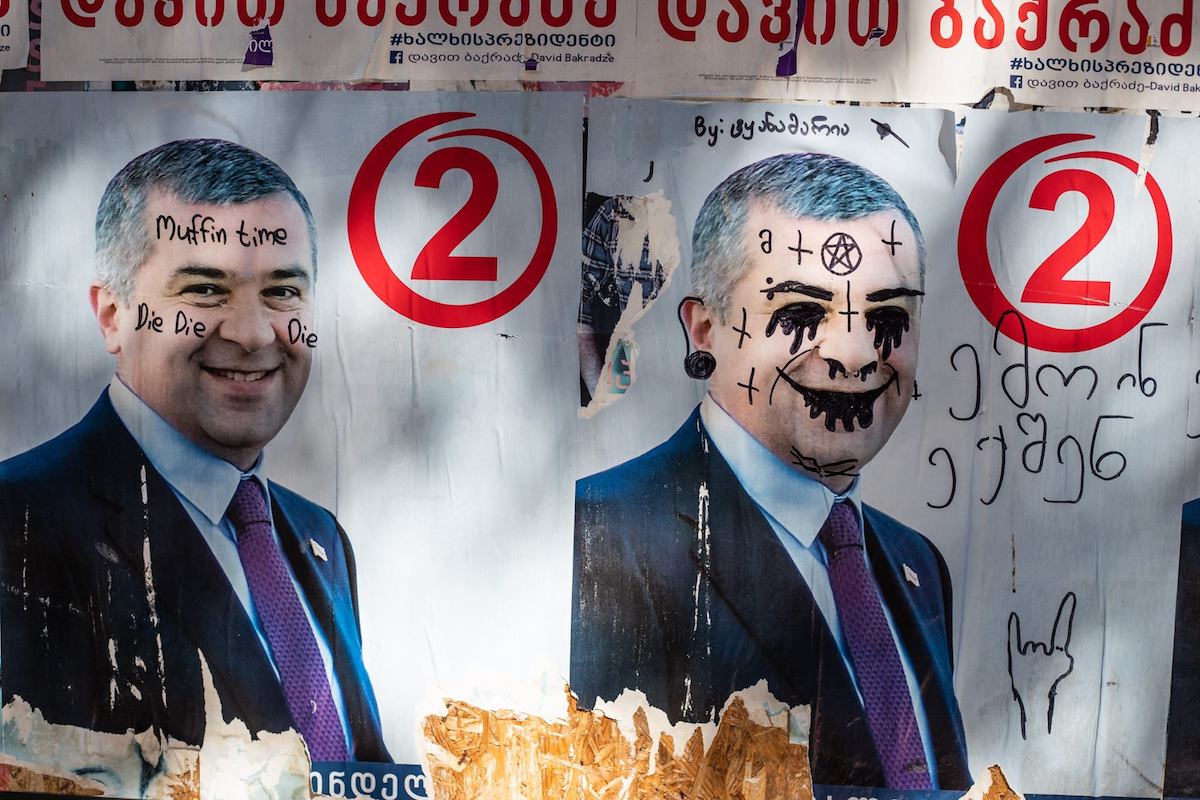 In this video you can see a sanitary worker ripping down the posters of David Bakradze. This is illegal during the election campaign as the posters have been put up in full compliance with the law.