Armenians are the second largest ethnic community in Abkhazia. According to the latest population census conducted in 2011, there are about 45,000 Armenians in Abkhazia, which is approximately 20 per cent of the republic’s total population. Such a large and rather tight-knit community certainly has its leader. Galust Trapizonyan has been the leader of the Union of Armenians in Abkhazia since January this year. 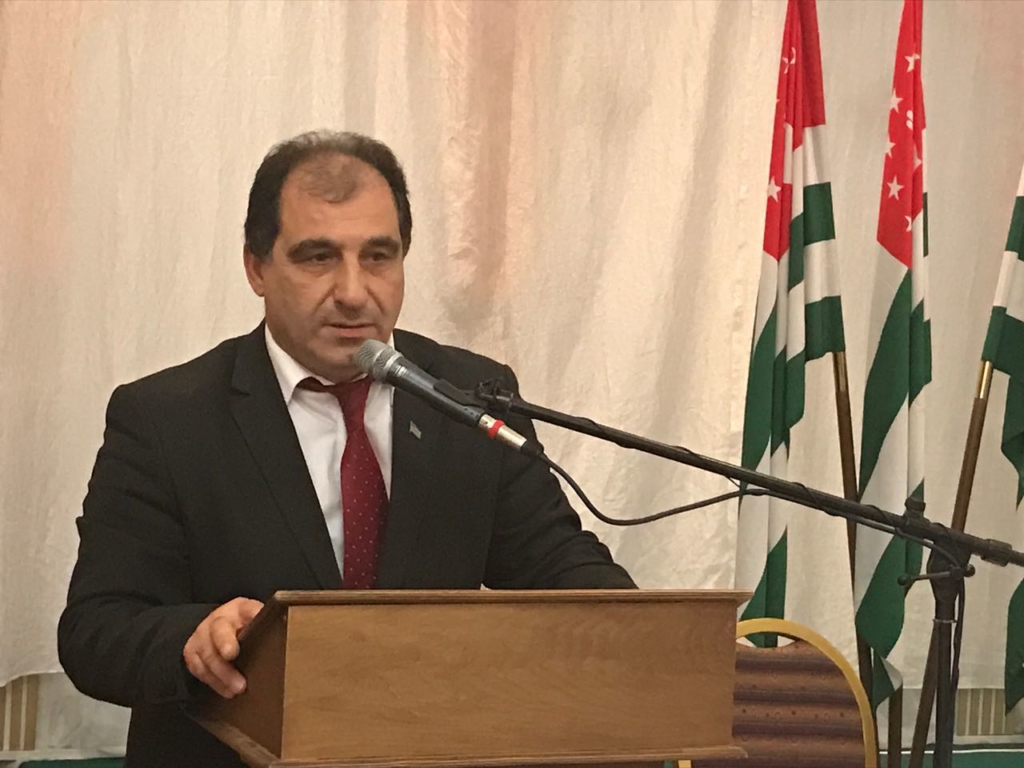 Galust Trapizonyan, the Director of Gagra-based Gagripsh recreation and retreat center, is regarded as the Armenian community’s most influential figure and a man with good ties in the governmental circles of Armenia.

He has been conferred the Hero of Abkhazia title. He commanded a company of the Armenian Baghramyan Battalion during the Abkhazian-Georgian war in 1992-1993 and lost his leg in battle. He used to hold various high-rank posts in the Abkhaz government; was twice elected as an MP, used to be a principal of a Gagra-based Armenian school, was engaged in business and used to hold the leading positions in the Armenian community in Abkhazia.

One of the main objectives of the congress was to elect a new leader and it became a rather notable event in Abkhazia.

There were queues of those, willing to undergo registration for the congress, which was underway in the conference hall of ‘Inter-Sukhum’ hotel. 217 delegates from all districts of the republic, except for Gal district where there are almost no Armenians, arrived to participate in congress – today, Gulripsh, Sukhum and Gagra districts of Abkhazia are densely populated by Armenians.

Among the congress guests were not only the Armenian community members, but also the MPs, Ministers, the leaders of various political parties and public organizations. Such events in Abkhazia always kindle serious interest on part of elite.

Two candidates, Galust Trapizonyan and Khachik Minasyan, were nominated for the post of a new leader of the Union of Armenians in Abkhazia.

Khachik Minasyan, ex-director of one of the recreation and retreat centers in Gagra and an incumbent member of the Public Chamber of Abkhazia, used to head the community for nearly 6 years. He unexpectedly filed resignation in May 2016. However, right on the eve of the congress, he suddenly decided to run for the organization leader’s post again.

Each candidate was supported by rather influential figures of the Armenian community. Several observers closely monitored the election process. Finally, 82 delegates voted for Khachik Minasyan and 124- for Galust Trapizonyan.

Go to top
Why is it so important for the Armenian community to have its own union? – that’s the question we asked some of those, who regard themselves as part of the community.
Go to top

There are 26 Armenian schools in Abkhazia, where Armenian language, literature and history are taught in Armenian, while the rest of the subjects –in Russian.

Most of the teachers are of pension age and there are very few young teachers.

“I’m a graduate of Yerevan Pedagogical Institute. I started teaching lower grades in Upper Eshera school in 1988. After the war, I changed job and started working at Sukhum secondary school #9. I’ve been working here for 23 years already.

We receive school textbooks from Armenia. We have the textbooks, published in 2005-2007, in all grades. I’ve heard, there are problems with textbooks in the districts. It would be nice if we were provided curriculums from Armenia.

Young people mostly go to Armenia to study there, but some of them return upon completion of studies.

Why do we need the community? We are uniting beyond our historical homeland to support and help out each other. I can’t imagine living without the community. Experts from Armenia visited us to deliver advanced training courses for Armenian school teachers. Our children travelled to Armenia as part of the Ari Tun exchange program. All the aforesaid was organized by the community. Daniel Asaturyan, my neighbor, travelled to Greece to attend the European youth championship and it was the community that assisted him and funded that trip.”

Eduard (he asked not to mention his last name), 34, is a director of one of Sukhum-based groceries, says:

“It all happened by chance. I just took a job in this field, then I showed my true worth and then my career started gradually developing. The economic situation in Abkhazia is far from being perfect, there are less clients than some 2-3 years ago. But this is probably good for business, since when things go too smooth you just get relaxed. Whereas when you start facing difficulties, you become a more determined and aggressively enterprising person.

It’s important for Armenians to have their own union in Abkhazia, since it allows preserving their national identity. And it will greatly contribute to further development of the republic, society, interethnic relations.

I don’t have any business ties or links with the community in Armenia. Goods cannot be delivered to Abkhazia directly from Armenia, they are transported in transit through Russia. Those are mostly canned fruits and vegetables, but they aren’t much popular in Abkhazia, since nearly every family here makes their own homemade preserves. Thus, ‘Armenian’ products are delivered here mostly for the assortment.”

Suren Kerselyan was among those, who actually re-established and organized the work of the State Standard of Abkhazia in the post-war period.

“I’ve always found it interesting to be engaged in country’s public and political life. I’ve been heading the Armenian community in Sukhum since 2004. At different times, I used to be a member of the Abkhaz Public Chamber, a minister and the government vice-premier. I’m retired now.

Armenian communities are operating as organizations around the world. There are our communities in every area densely populated by Armenians. The community is trying to consolidate the Armenian society and create conditions for its development. The very first provision of our charter envisages facilitation of strengthening of the Abkhazian statehood.

There is Article 49 of the Constitution of Abkhazia, under which only an ethnic Abkhazian, rather than any citizen of Abkhazia, can be elected as President of the republic. However, we, the Armenians, don’t find it offending. It’s quite clear for everyone, why this article is there. There were times when ethnic Abkhazians made just 17% of the total population, Georgians were forcefully settled here. So, the Abkhazians had to take measures to secure themselves.

There are no other laws restricting Armenians or other ethnic groups in Abkhazia. My personal example shows that ethnicity isn’t an obstacle for career development in Abkhazia.”

“I studied in the Russian school. Then I graduated a vocational school, majoring in computer command engineering. I actually dreamt to become a singer, but nothing came out of it due to my poor articulation. Afterwards, I took an extramural training course in electrical engineering in St. Petersburg, but I never worked within my specialty.

I have a family, adult children, we have our own house and a farm: cows, bees and a vegetable garden.

We were more confident about the future in Soviet times, before the war. Even if people were unemployed or got sick, they were sure, they wouldn’t be lost. There is no such confidence nowadays. It’s probably the same everywhere in the post-soviet space.

Earlier, we used to communicate more with each other, whereas now people are busy improving their wellbeing, trying to overbid each other.

Therefore, our community is of particular importance for us. Otherwise, we will forget our culture. It would be nice to open a private school for the Armenian children studying in Russian schools, so that they could learn to read and write in their native language. For example, I can neither read nor write in Armenian. I can only speak in Hamshen dialect, and that’s because I used to visit my aunt in the village. I learned it there.”

According to Robert Ylyan, MP and a community member, it is presumed that the major achievement of the recently held Congress was that it finally settled a lingering ‘permanent conflict’ within the community.

Among the Congress’ key decisions were: to restore the community’s original name –‘Armenian community of Abkhazia’ and to reduce the community leader’s term of chairmanship to 3 years.

Suren Kerselyan, the head of the Armenian community in Sukhum, has declared the organization’s official mission as follows:

“We are the citizens of Abkhazia and our primary task is to facilitate strengthening of the Abkhazian state…Our nation gives us tremendous opportunities. Those are the ties with our historical homeland, Armenia, as well as with Karabakh, Russia and the diaspora across the world. So, we can make a great contribution to our country.”