The results of the election of the mayor of Istanbul, which was won by opposition representative Ekrem Imamoglu, have been canceled.

Despite protests by the opposition and the international community, the Turkish Central Election Commission remains unconvinced: the voting was conducted with violations it says, and the elections must be held anew. They are scheduled for June 23.

This decision was welcomed by President Recep Tayyip Erdogan – it was his ruling Justice and Development Party (AKP) that disputed the election results.

The new mayor had to leave his office literally days after the start of work.

Ekrem Imamoglu called the decision a “betrayal” and said that “democracy in Turkey has suffered a strong blow.”

Former Turkish Prime Minister Binali Yildirim will run for the mayorship from the Justice and Development Party.

In the local elections in March 2019, the ruling AKP lost in several major areas, primarily in Istanbul. Even then, experts warned that the politically weakening government was becoming more dangerous.

Why did the municipal elections become an important political stage for Turkey, who are the main figures and why has the “battle for Istanbul” in our article from April 2019 published immediately after the victory of the opposition mayor in Istanbul.

• Azerbaijani students in Turkey – why so many prefer to leave

An attack on the leader of the opposition

The leader of the opposition Republican People’s Party (CHP), Kemal Kiliçdaroglu, was attacked on 21 April.

Kiliçdaroglu was walking with his associates at a funeral procession in Ankara for a serviceman who had died earlier. Several dozen people disrupted the procession and attacked him.

An MP from the CHP, Levent Gök, was also attacked.

The guards and policemen led the party chairman to a nearby house, but an angry mob threw stones at the house. There were calls to burn down the house along with the opposition.

Many experts believe that this attack was organized by the authorities, and this is a reaction to the failed municipal elections for the ruling party on 31 March 2019.

The essential political background also lies in the fact that the AKP ruling party is headed by President Recep Tayyib Erdogan, and in the presidential elections in June 2018, his main rival, Muharrem Ince, was a candidate from the opposition – the Republican People’s Party.

Results of the municipal elections

Local elections in Turkey have always been of great importance, since municipalities throughout the country traditionally hold a lot of power and had a large budget. Their value declined somewhat after 2017, when President Erdogan initiated a referendum and received even more power following it. Then there was a constitutional reform that turned the parliamentary republic of Turkey into a presidential one.

• Turkey between democracy and authoritarianism

But despite these changes, everybody expected the local elections of 21 April 2019 to be a demonstration of who is actually stronger in Turkey today – the ruling party or the opposition.

It was especially important for both of them to get the majority vote in Istanbul and Ankara.

The largest number of municipalities was won by Erdogan’s party, the AKP. However, these elections were the most devastating elections the ruling party has ever seen in all its years in power.

A few numbers to clarify the situation:

The ruling Justice and Development Party won 44.33 per cent of all votes in Turkey. The main opposition – the Republican People’s Party – won 30.12 per cent.

The remaining votes were taken by other parties.

In Ankara, the situation is perhaps the most difficult. The post of chairman of the city municipality of the capital of Turkey was taken by an opposition candidate. But in many district municipalities of Ankara, the candidates from the ruling party won.

In a video taken during the attack on the funeral procession, it is clear that ruling AKP member Osman Sarigün struck Kemal Kiliçdaroglu in the face.

The ruling party immediately made a statement after the incident in which it criticized the events, and announced the exclusion of Sarigün from the party ranks. Also, six people were detained, among whom was the main instigator, Sarigün.

But five of them were released immediately after being interrogated. And three days later, Sarigün was released as well. During the investigation, they will remain free.

The fight for Istanbul

The biggest loss for the ruling party was that of Turkey’s metropolis, Istanbul, where the opposition member Ekrem Imamoglu won the race for mayor.

AKP leaders did not recognize the defeat for 17 days. The results of the elections had already been announced all over the country, but in Istanbul the ruling party announced fraud and demanded repeated elections. This demand was not granted. But the votes in Istanbul were counted several times.

The city reacted to the post-electoral chaos very actively. For example, on 13 April at a football match between the Besiktas and Bashakshekhir teams, choir fans demanded that the municipality’s mandate be given to Imamoglu.

He was finally declared the winner of the elections and he took up the administration of Istanbul.

However, the race was very close: according to official data, opposition candidate Ekrem Imamoglu won 48.80 per cent of the votes, and his rival from the ruling party, Binali Yildirim, won 48.55 per cent.

At the same time, supporters of the authorities continue to talk about the “struggle for Istanbul”. The ally of the AKP in the municipal elections and chairman of the Nationalist People’s Party, Devlet Bahcheli, said:

“We should not talk about the end of this story – the protests will continue.“

Influential politician Nejmeddin Erbakan also made a comment which to some may sound like a threat. He was the Prime Minister of Turkey in 1996-1997 and is considered the creator of the leading ideology of political Islam in Turkey today. Erbakan is also called the mentor of today’s president, Erdogan.

Following the announcement of the victory of the opposition in Istanbul, Nejmeddin Erbakan tweeted:

“Istanbul must be re-conquered.“

Why is Istanbul so important?

The first major success in the political life of President Erdogan was his election to the post of the head of the Istanbul municipality in 1994.

Since then, only candidates from the ruling party, or from its allies – the Rifah Party and the Fazilet Party (Virtue Party) – have won the mayorship.

Who is the new (now dismissed) mayor of Istanbul Ekrem Imamoglu 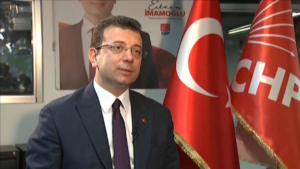 The new mayor of Istanbul, 49-year-old Ekrem Imamoglu, was engaged in a family business which he inherited from his father before the start of his political career.

He has been a member of the opposition Republican People’s Party since 2009.

In 2014, Imamoglu was elected head of the municipality of one of the districts of Istanbul. The nomination of his candidacy for the post of mayor was a surprise for experts, since so far Imamoglu has not been considered an authoritative political figure.

A political columnist for the Sözçü newspaper, Emin Çoleshan, believes that the attack on an opposition leader will stimulate a sharp polarization of the population, which could lead to confrontation.

Çoleshan says during the long years of its rule, the ruling AKP declared that those who did not support it were enemies of society — and in fact engaged in the destruction of the foundations of society. Therefore, the attack in Ankara may not be the only incident, as Turkish society risks facing even more serious consequences, the expert says.