The economic crisis in Turkey

The Turkish lira has finally begun to recover in the past few weeks after a long and very dramatic fall.

The initial reaction to this has been met with joy by both the local population and neighbouring countries, including in the Caucasus, whose economies are very tightly connected to that of Turkey.

But experts say that it is still too early to talk about the end of the economic crisis in Turkey.

• Turkey between Erdogan and Gulen

• How has the fall of the Turkish lira affected the countries of the South Caucasus?

• Istanbul – the city above sultans and presidents

President Erdogan’s administration insists that there has been no economic crisis in Turkey, and that the devaluation in the Turkish lira is the result of US policies and the personal machinations of Donald Trump.

The opposition, meanwhile, is confident that the only reason for the current situation in the country is 16 years of incompetent rule by the Justice and Development Party.

The start of the fall

On 12 October 2018, an Izmir court sentenced Andrew Brunson to three years imprisonment, with time served given that he had been in prison since July 2016.

Since he had already spent three years under arrest during the preliminary investigation, Brunson was released from the courtroom. He immediately flew on a special plane first to Germany and then to Washington where he met with the US president at the White House.

His meeting with Donald Trump upon arrival was no accident; on 17 April 2018 Trump tweeted in defense of Brunson: 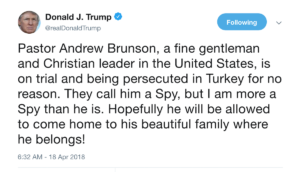 Following Trump’s tweet, the economic crisis in Turkey deepened as the lira fell even further.

Donald Trump continued to send messages to the Turkish authorities about Pastor Andrew Brunson’s case until his sentence was passed. There were initially harsh statements such as “while I am in this post, you will not receive this terrorist”.

Then Erdogan began to speak with more restraint, saying that “the courts in Turkey are independent, and they will make a decision”.

Immediately after Brunson’s return to the United States, the lira to dollar ratio improved somewhat, decreasing from about 6.07 lira  to 5.61 lira against the dollar.

• Georgian citizens in Europe – without visas, without asylum

The price of the dollar rose in April 2018 to four lira for the first time in the history of Turkey before Trump even drew attention to the situation with Brunson. At the same time, the internal political situation in Turkey was becoming more tense.

Parliamentary elections were supposed to be held in April 2019, but Erdogan decided to hold snap parliamentary and presidential elections and did so on 24 June with an extremely positive result for himself and his party.

These political events in the country were accompanied by a sudden and sharp rise in the dollar. By May, one dollar was worth 4.5 lira.

The impact of political authoritarianism on the economy

In 2008, the dollar was worth about 1.15 lira. Then the leading trend in the country was economic liberalisation.

However, Erdogan became more and more authoritarian, and, as a result, created a system of government in which political steps directly began to influence the economy.

Erdogan was the first in Turkey to talk about the fact that the West is putting pressure on Turkey with the dollar when, on 30 May 2013, he linked protests to protect Gezi Park in the centre of Istanbul to the growth of the dollar. However, at the time, the dollar only rose from 1.85 to 1.92 lira.

Thus, Erdogan opened a new page in the history of the country. Turkey ceased to be a country with a liberal economy in the eyes of the West, willing to join the European Union and seeking to resolve the Kurdish issue. Turkey had become another authoritarian regime in the Middle East.

On 24 June 2018 Turkey once again handed over the presidency to Erdogan and the majority in parliament – the Popular Alliance supporting him (formed of the Justice and Development Party and the Nationalist Movement Party). On the same day, the dollar rose to 4.70 lira.

Despite the relatively calm post-election period, the Turkish economy has been in one of the deepest crises it has ever seen since 2001.

A chronicle of the fall of the lira

The United States imposed sanctions in August on Turkish Interior Minister Suleyman Soylu and Justice Minister Abdulhamit Gul. The reason was again the arrest and imprisonment of Pastor Andrew Brunson.

On 1 August the dollar was already worth 5 lira.

On 9 August during a rally in Rize province President Erdogan said:

“They have dollars, and we have Allah.”

“Those who have dollars or gold under their pillows should exchange them for liras in our banks.”

On the same day, immediately after Erdogan’s speech, his son-in-law as well as Berat Albayrak, who was appointed minister of treasury and finance in the new government, spoke on television and presented a new economic programme. The dollar was worth 6.04 lira when he began to speak. After 50 minutes, when his speech had ended, the lira had dropped to 6.3 against the dollar.

At the same time, Donald Trump announced he will raise customs duties on aluminum and metal. The lira rose further to 6.40 per dollar.

Then, on 13 August Trump decided to postpone the sale of F-35 type aircraft to Turkey.

Two days later, Erdogan urged his people to abandon the purchase of American technology and give preference to Korean and Japanese goods. An additional customs duty was also introduced for imported alcohol and tobacco products from the United States.

The dollar remained fairly stable after that until 13 September, when the Central Bank of Turkey decided to increase the percentage Turkish banks were issuing loans at – from 17% to 24%.

Immediately afterwards, the dollar began to fall and in September and stopped at 6.05 lira per dollar.

The release of the American pastor who was accused of espionage was a secondary factor that greatly influenced the exchange rate of the dollar. The lira went from 5.95 to 5.64 against the dollar.