Over 100 films screened at international Golden Apricot Festival in Yerevan

The 16th Golden Apricot Festival in Yerevan has kicked off this week, with 110 films to be screened from across the world.

13 films will compete for the main prize, including Armenian film Long Night, by director Edgar Baghdasaryan.

• Hollywood film banned in Russia and Ukraine – but for different reasons

The opening ceremony took place on July 7, with famous directors, screenwriters and actors walking along the red carpet in the Karen Demirchyan sports and concert complex.

Deputy Minister of Education, Science, Culture and Sport of Armenia Ara Khzmalyan said in a press briefing that for 15 years, the Golden Apricot film festival has taken a worthy place among international festivals, as evidenced by the number of guests, participants and the festival programme.

Per festival tradition, the dedication of stars to celebrities of Armenian cinema took place on Charles Aznavour Square.

This year, the names of three directors were added to the already existing ones: Bagrat Hovhannisyan, Arman Manaryan and Gennady Melkonyan. 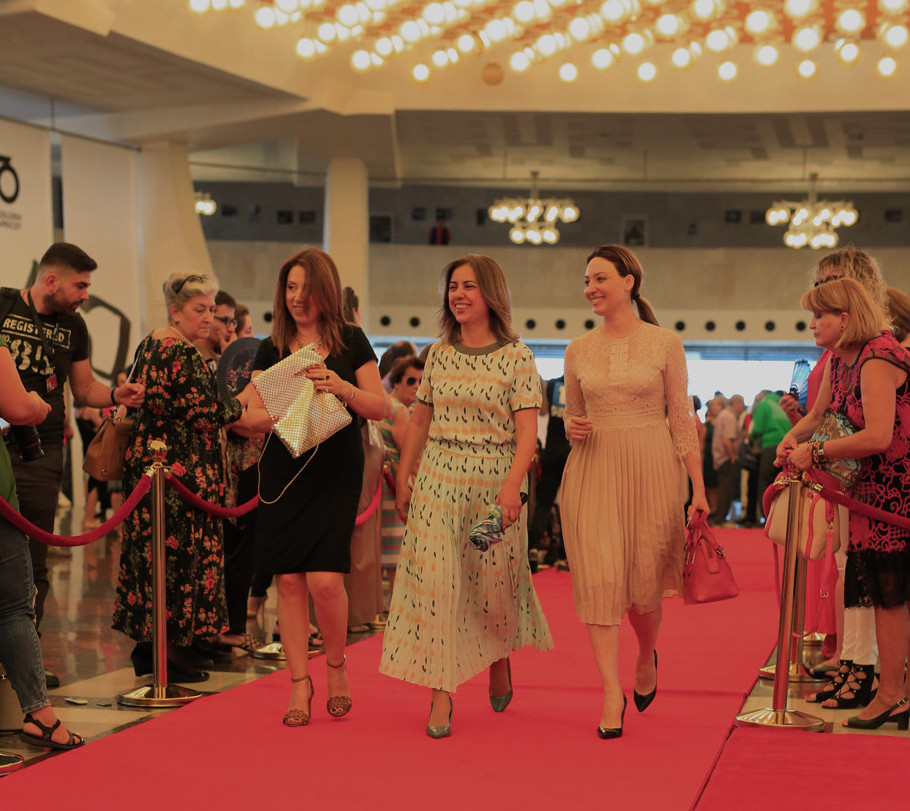 What has changed in the programme

It was announced in December 2018 that the festival would continue but under new leadership. The festival’s co-founders appointed Karen Avetisyan the programme director for the festival.

However, Artuun Khachatryan refused to direct the festival, because he was going to put forward his candidacy for the post of chairman of the Union of Cinematographers of Armenia.

The hype surrounding the festival has changed as well, with its advertising and PR department employing what some on Armenian Facebook thought were rather risqué methods of attracting attention: posters appeared around Yerevan with the words: “Coffee, center, cinema?”, “Do you want to go to a freaky flic?”, “Eat my apricot.”

The new director of Golden Apricot, Hasmik Hovhannisyan, explained that these phrases were not chosen by chance. She explained that the posters were developed on the basis of memes and socially important topics popular on Armenian Facebook and other social media sites.

“This year we decided to make posters related to the reality of Yerevan.”

Three information centers operating in the center of Yerevan are also new for the festival.

In addition, a mobile app has been launched for the festival as well.

As for the screenings themselves, this year a strict policy has been introduced: latecomers are not allowed into the theatre.

Who’s participating in the festival?

This year, both well-regarded directors and amateurs have their films being screened during the festival.

The programme Regional Panorama includes 12 pictures from Armenian, Georgian, Turkish and Iranian cinematographers. In addition, documentary film Molokans, a joint Russian-Azerbaijani production, will be shown. The film speaks about the life of the Molokans who live in Azerbaijan.

A large selection of foreign films is presented at Golden Apricot by the embassies of European countries as well. The diplomatic missions will present special projects with the participation of famous directors, producers and actors to the audience of the film festival.

French Ambassador Jonathan Lakot said that within the framework of the Golden Apricot Talent Lab program, famous film critic Olivier Pelison of the Cannes program of Critics Week and producer Francois d’Artamar will give a four-day master class.

“As part of the New French Cinema program, a number of bright films will also be shown, including the film Farewell by Agnès Varda and Synonyms of Nadav Lapid,” Lakot announced.

The program of the festival also includes films from Italian, German, Polish and Russian cinema.

On the opening day, the film Saber Dance by Yusuf Razikov, which speaks about the life of Armenian composer Aram Khachaturyan, was screened.

About the Golden Apricot Film Festival

The Golden Apricot film festival has been held in Yerevan since 2004.

In the first year, only Armenian filmmakers took part. Starting in its second year, it attracted international directors, and has now gained recognition outside Armenia.

The founders of the festival originally conceived of it as a kind of cultural bridge between the West and the East and came up with the motto, “Crossroad of Cultures and Civilizations”.

Until 2011, three major programme were included in the festival: international contests of feature and documentary films and the Armenian Panorama competition. Since 2011, there has also appeared a competition for short films, Apricot Pit.

Over the years of the festival, the writer and screenwriter Tonino Guerra, actresses Claudia Cardinale, Fanny Ardant, Nastassja Kinski, Ornella Muti, Jacqueline Bisset have visited the Armenian capital to participate.