Options for Engagement in Abkhazia and South Ossetia 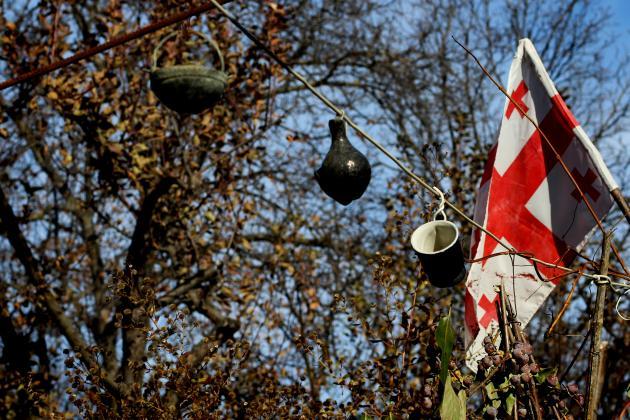 War survivor cups, exhibited in the yard of the resident of the village near Tskhinvali. Creator: Oliko Tsiskarishvili. All rights reserved.

The conflicts over Abkhazia and South Ossetia have been in a quiet and depressed condition since the disastrous five-day war of 2008 and Russia’s decision to recognize the two territories as independent states.

The parties have met in Geneva 33 times but the main achievement of those talks has been, in a sense, the talks themselves, the fact that the parties to the conflict have managed to keep on negotiating with one another, albeit over very minor issues.

The paradox for Abkhazia and South Ossetia is that Russian recognition has only made these two places more isolated internationally and more dependent on Russia. Being ‘hitched to the Russian cart’ has had increasingly negative consequences for the Abkhaz and South Ossetians. Inside Russia, they are treated with contempt by many Russians as ‘persons of Caucasian nationality.’ The decline of the Russian economy means that subsidies from Moscow have decreased.

Since the Ukraine crisis broke out in 2014, this situation has got even worse. Abkhazia and South Ossetia have been put under pressure to support Moscow’s annexation of Crimea and military intervention in eastern Ukraine–something the South Ossetians have agreed to with enthusiasm, but the Abkhaz have been noticeably much less willing to do.

Recognition by Russia has brought some benefits to Abkhaz and South Ossetians. If you ask them ‘Is life better than before 2008,’ many people mention a feeling of security and social benefits. Pensions are now being paid at the same level as in the Russian Federation.

The price being paid for this is creeping annexation by Russia.

For South Ossetians, this is not a problem. The population in South Ossetia is now tiny, probably no more than 30,000. For many years the de facto capital of South Ossetia has been Vladikavkaz, not South Ossetia and most Ossetians would welcome the idea of a unified Ossetia.

But for Moscow there would be obvious minuses in this scenario.

The Crimean scenario in South Ossetia (as this would be, if executed) would further exacerbate relations with the West. After all, it was the annexation of Crimea, in contravention of international law, which triggered the most punitive Western sanctions against Russia. And it would completely burn Moscow’s bridges with Tbilisi.

Following the downfall of its bête noire in Georgia, Mikheil Saakashvili, Russia has been trying to rebuild a relationship with the new Georgian government, but the two countries still have no diplomatic relations because of Moscow’s de facto control of Abkhazia and South Ossetia. If Russia were to formalize that takeover with a Crimea-style takeover of South Ossetia, it would alienate Georgia completely and thus lose far more than it gained.

Abkhazia is even more problematic for Russia. It requires more money and yet there is a widespread perception in Russia that the Abkhaz are ‘ungrateful’ for Moscow’s military and financial investment in the republic. Although Russia remains Abkhazia’s almost only partner and friend, much of the Abkhaz political elite is still suspicious of Russia. They resisted the first draft of a treaty that Surkov had drafted for them in 2014. And they still resist the change that is most important for Moscow – the right for foreigners (or Russians in other words) to buy property in Abkhazia.

Truly, the situation is one ‘with no winners.’ Is there anything that can be done?
On the high political level, the answer seems to be ‘No.’ The positions of Tbilisi on the one hand, supported by most of the international community, and of the two territories, supported by Moscow, on the other hand, are irreconcilable.

Abkhazia and South Ossetia have no intention of going ‘back’ to Georgia. The more time passes, the bigger the gap between Sukhumi and Tshkhinvali and Tbilisi. It should not be forgotten that the last time Abkhazia, South Ossetia and Tbilisi were in one country, it was not independent Georgia, but the Soviet Union.

Georgians need to accept that they cannot restore Georgian sovereignty over Abkhazia and should therefore focus on what is the next best option.

The paradoxical conclusion must be that for Georgians should help Abkhazia achieve greater sovereignty and de facto independence.

A stronger more ‘sovereign’ Abkhazia will keep open its options in the future for making arrangements and cutting deals with Tbilisi, while an Abkhazia that is basically absorbed into Russia – and in which Russians acquire land and property – will be completely lost and alien to Georgia.

In practical terms this means that Georgians should support all measures which integrate Abkhazia into the outside world on a ‘status-neutral’ basis. That means:

• dropping objections to Abkhaz traveling abroad;
• allowing Abkhaz students to study in Europe under the European Union’s Erasmus program;
• allowing Turkey to have its ships trade legally with Abkhazia and perhaps open a consulate or representation office in Sukhumi;
• encouraging the European Union and United Nations to open ‘information offices’ in Abkhazia.

These are measures that Abkhaz themselves have long wanted. A few years ago these might have looked radical. Now they are barely enough to open up Abkhazia even a little to the outside world.