Azerbaijani youth held a demonstration in front of the Georgian parliament in Tbilisi yesterday, protesting the unveiling of a bust of Mikhail Avagyan in the Akhalkalaki region. Avagyan was a native to the area who died fighting in Nagorno-Karabakh.

The bust was unveiled in Bugashen village on 24 January. Avagyan fought on the Armenian side in Karabakh and was known by his nickname “Cobra”. He died in 1994 as a result of his injuries.

The bust was unveiled in the courtyard of the school where he studied.

The event caused quite the public clamour, since in addition to local residents, the opening ceremony was also attended by local officials, Georgian MPs and the Armenian ambassador to Georgia.

The bust caused protests in both Baku and Tbilisi. The former summoned the Georgian ambassador to Azerbaijan to demand an explanation.

Estimates put rally participation at around 300 or 400 people. The flags of Georgia and Azerbaijan were displayed at the rally, in addition to posters with the inscriptions:

“Only [real] heroes are worthy of monuments.”

“Avagyan is a separatist.”

Protestors said the installation of the bust in Akhalkalaki was ‘provocative’, and that it was an attempt to put pressure on Azerbaijani-Georgian relations. 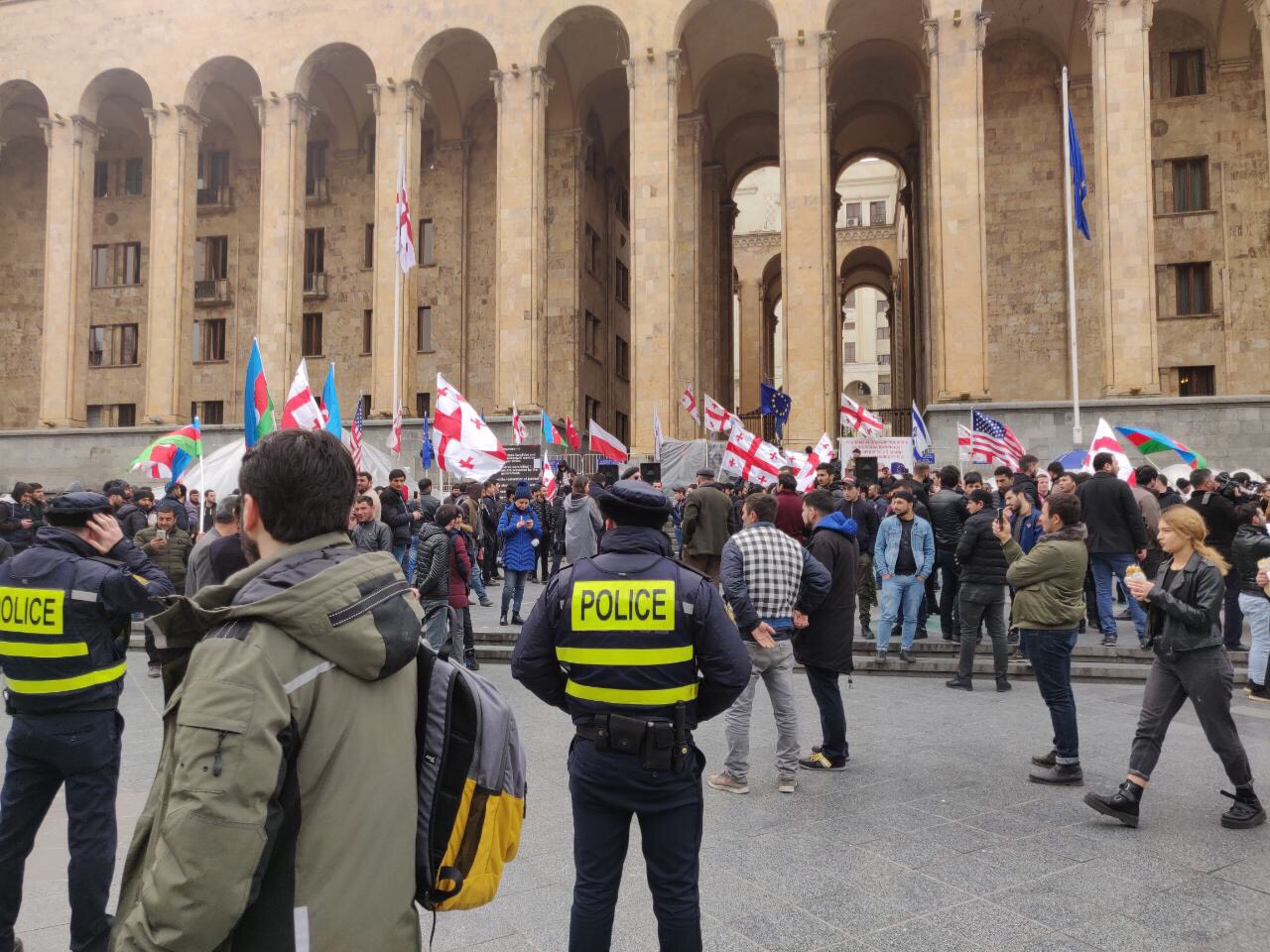 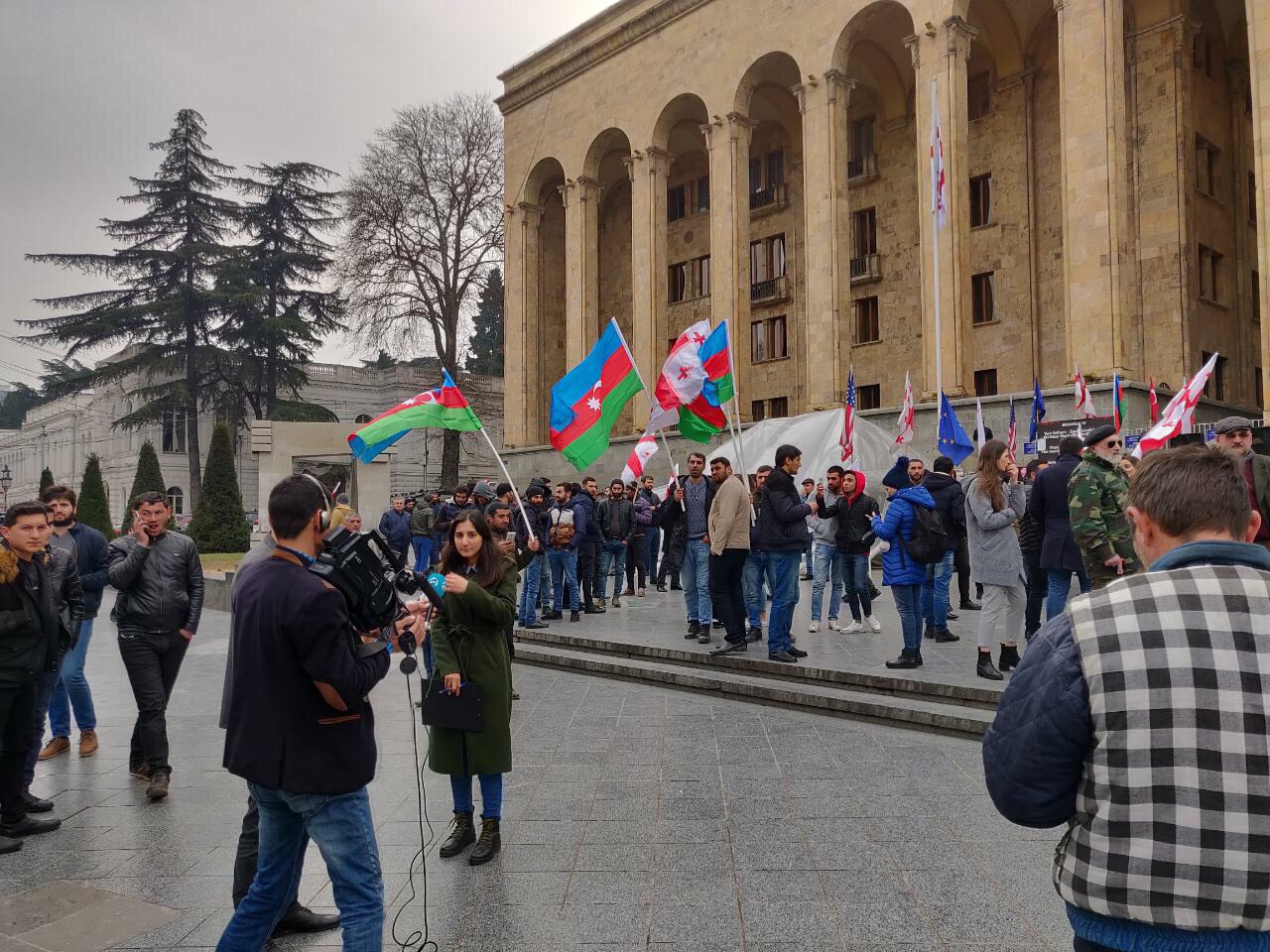 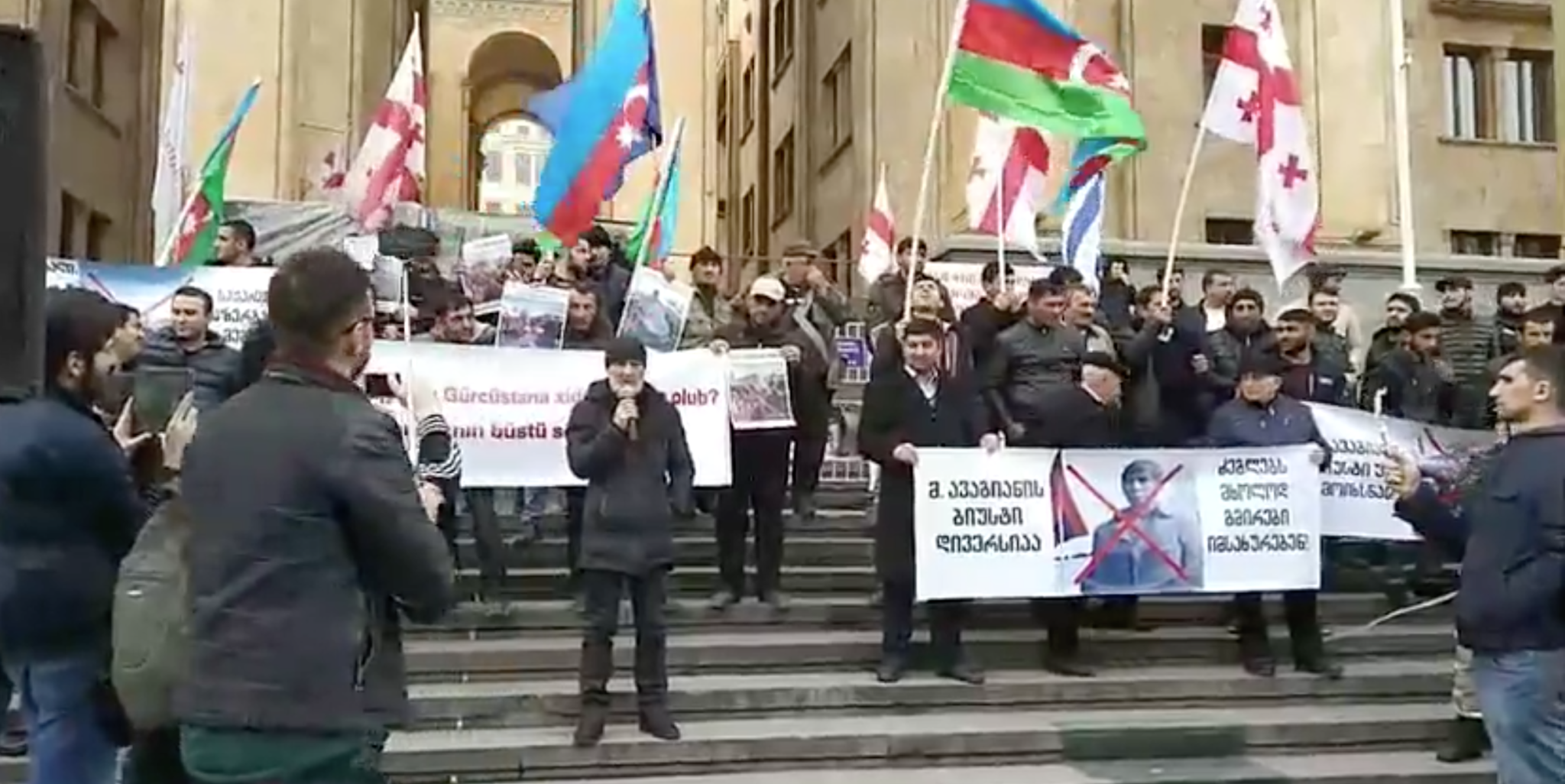 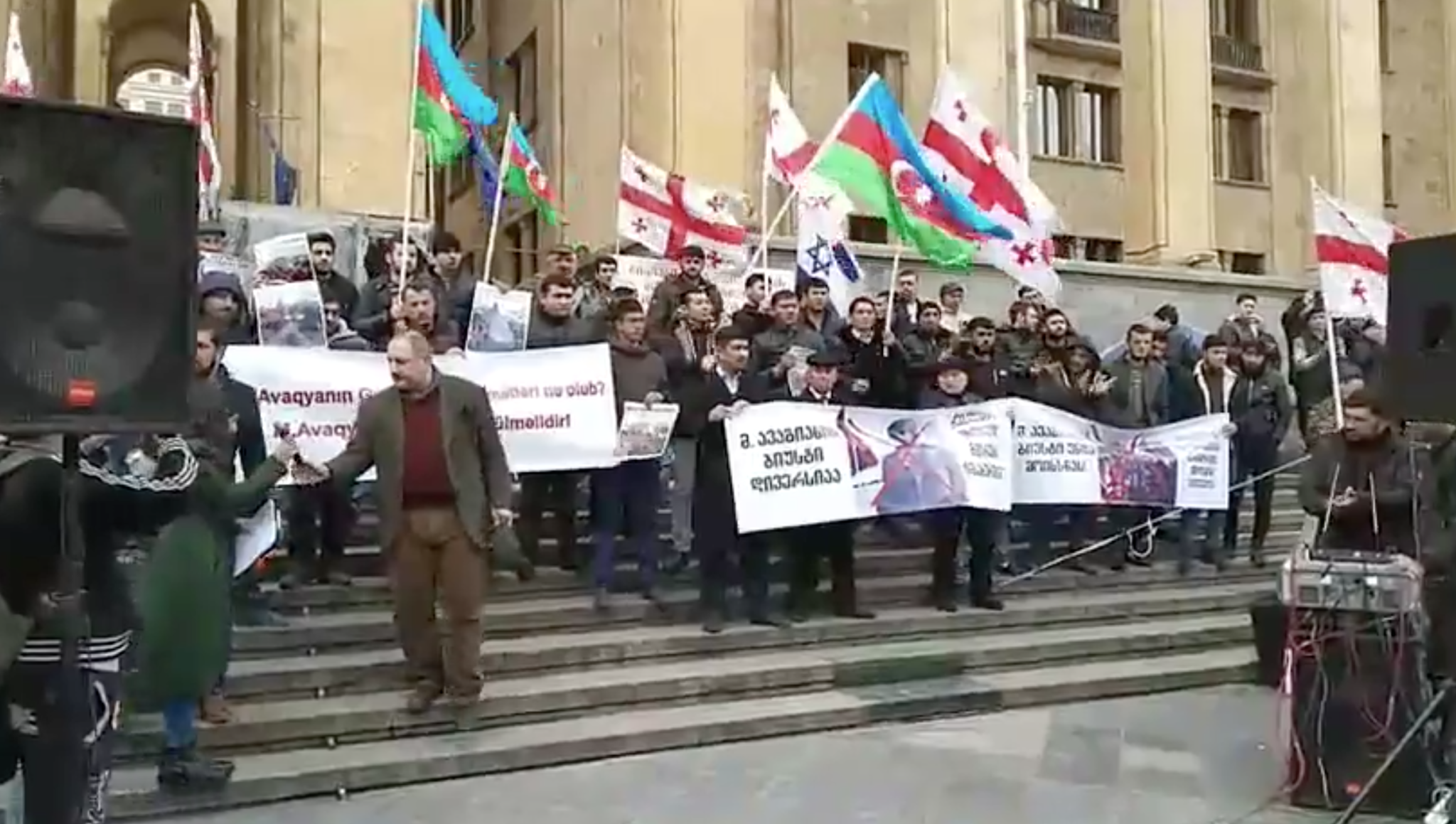 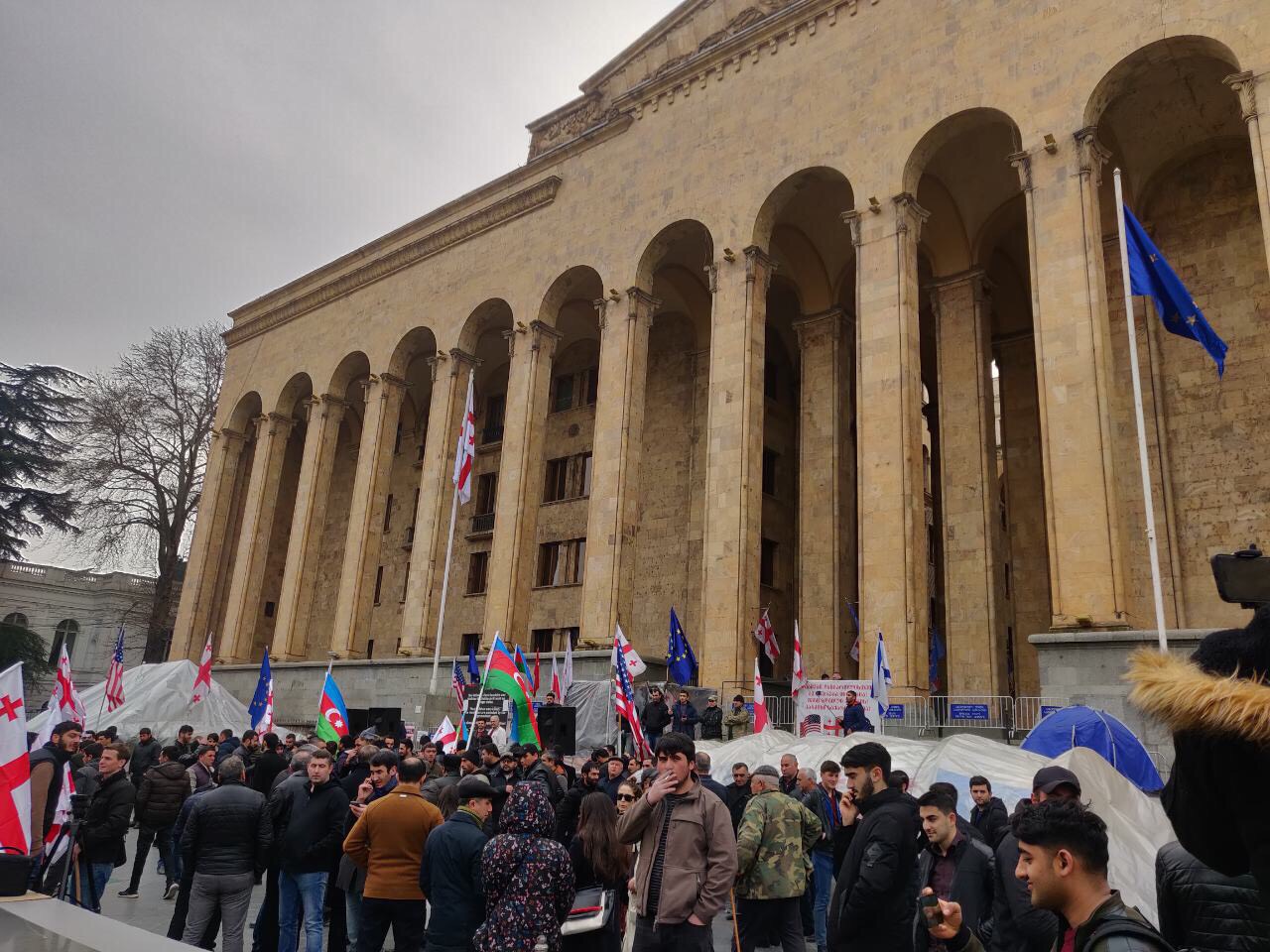 JAMnews spoke with an organizer of the rally, Sevinj Umbetova, a student at the Faculty of Sociology at Ilia State University.

Umbetova said the only demand of the protesters is to have the statue taken down.

“The statue is an insult for Azerbaijanis living in Georgia. Avagyan killed Azerbaijanis in Karabakh, and in Georgia he was awarded a monument for it? He fought against Georgians in Abkhazia,” Umbetova told JAMnews.

In addition to the youth protesters, older people from Marneuli, Bolnisi and Gardabani [ed. Primarily Azerbaijani-populated areas of Georgia] also took part in the rally.

• Landmines on the Georgian-Azerbaijani border

Rally participants said they came to Tbilisi at their own expense. Umbetova confirms:

“Nobody helped us. People arrived in Tbilisi in their own cars. We purchased flags and banners with our own money,” she said.

Georgian officials did not appear at the rally, with the exception of the ethnic Azerbaijani MP Azer Suleymanov, who said the rally would continue until the Georgian authorities agree to have the bust taken down.

“Georgian officials should think and decide whether they support separatism or not. If the monument remains in place, the rally will continue,” said Suleymanov.

The father of a boy murdered last year in a special operation in Georgia’s Pankisi Gorge, Temirlan Machalikashvili, also spoke at the rally.

Malkhaz Machalikashvili said he had come to “express solidarity with the participants of the rally” on behalf of the people of Pankisi Gorge. He also said that the “unveiling of the bust to Avagyan is not in the interests of either Armenians, Georgians or Azerbaijanis”.

“We know perfectly well [who needs this ‘diversion’]. This may suit Russia, but we – the Muslims living in Georgia – Azerbaijanis and Chechens, will not allow anyone to sow hatred in Georgia. We will always stand up for her interests,” Machalikashvili said.

The rally was supposed to have taken place on 5 February, but the Tbilisi mayor’s office did not give permission.

“They apologized to us, saying that Saralidze and Machalikashvili’s rally was scheduled for 5 February,” Umbetova said, adding that she and other Azerbaijani students would decide on further action if the statue is not removed.

This is the first rally in recent years that Azerbaijanis living in Georgia have held. Moreover, Azerbaijani youth have rarely participated in such protests.

“Yes, we may have other problems, but we have never been offended in this way, so we organized a rally. And we will not stop until the statue is removed,” said one of the participants of the event, a young Azerbaijani named Jeyhun.

•   The Armenian community is the second largest in Georgia. Armenians mostly live in the southern part of Georgia, in the Samtskhe-Javakheti region. According to the 2014 census, 168 thousand Armenians live in Georgia.