Updated: issue of bail for ex-president of Armenia drags on

An Armenian court is still deliberating whether or not to grant former president of Armenian Robert Kocharyan bail.

A decision was not reached today, and there was not enough time for all parties to present their case.

The next session will be held on May 16.

The prosecutor’s office made a motion to continue the issue in private almost from the very beginning of today’s session.

The judge did not satisfy the motion of the prosecution, and Kocharyan’s lawyer delivered a long speech in front of all present.

The judge remarked that he had the impression that there was an attempt to delay the process as long as possible.

Previous court hearings in the ex-president’s case have been held behind closed doors.

All the details of the case and how the trial took place the previous two days below.

A trial to determine whether or not ex Armenian president Robert Kocharyan should be released on bail has been going on for two days.

He stands accused of ‘overthrowing the constitutional order’ – that is, of complicity in the fatal events of 1 March 2008 – and was arrested in December of last year.

The second president of Armenia does not admit to any of the charges against him, and his lawyers have repeatedly filed petitions to have the preventative measure of his arrest changed –they have all been denied. 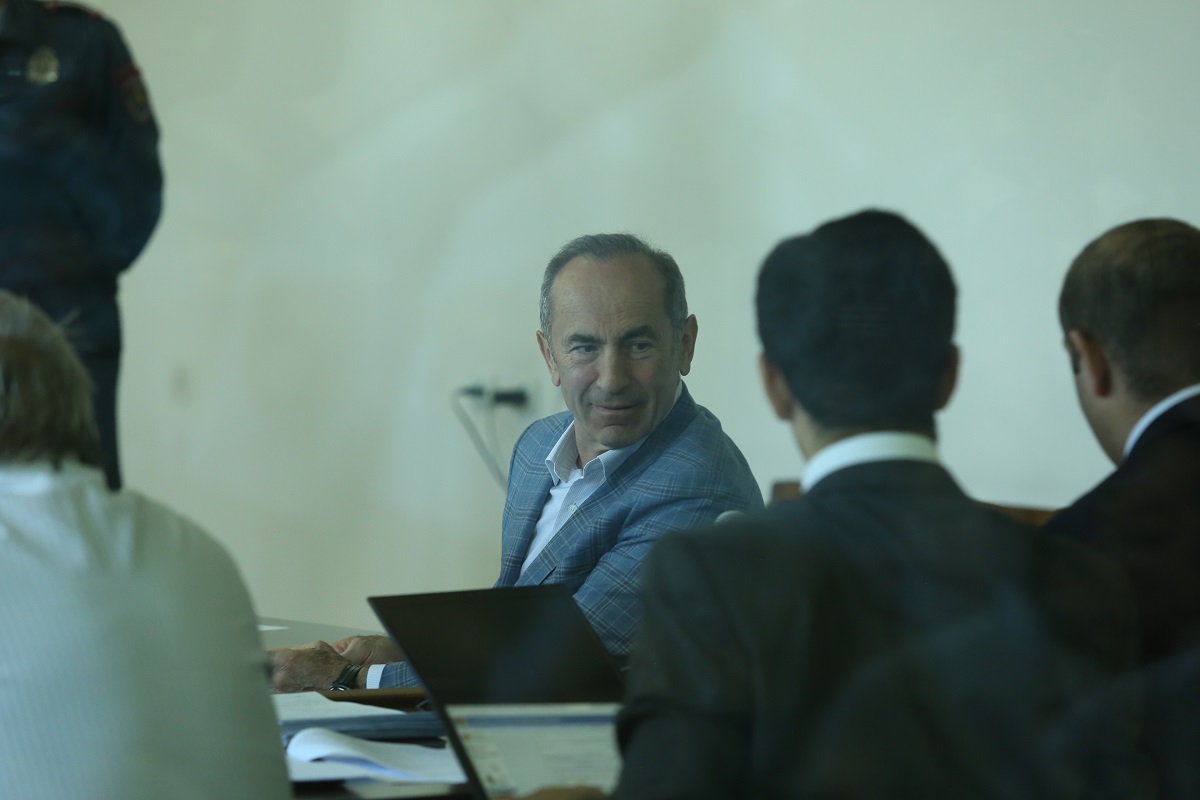 This has been explained by the court that while out of prison, Kocharyan could use his connections and influence the course of the investigation.

On the first day, the court hearing was delayed, and Judge David Grigoryan was forced to postpone it.

On the second day, the lawyers of the accused asked the judge to continue the session the next day. Armenia is actively discussing the case and watching closely.

JAMnews continues to monitor the case and will present the verdict as soon as it is announced. 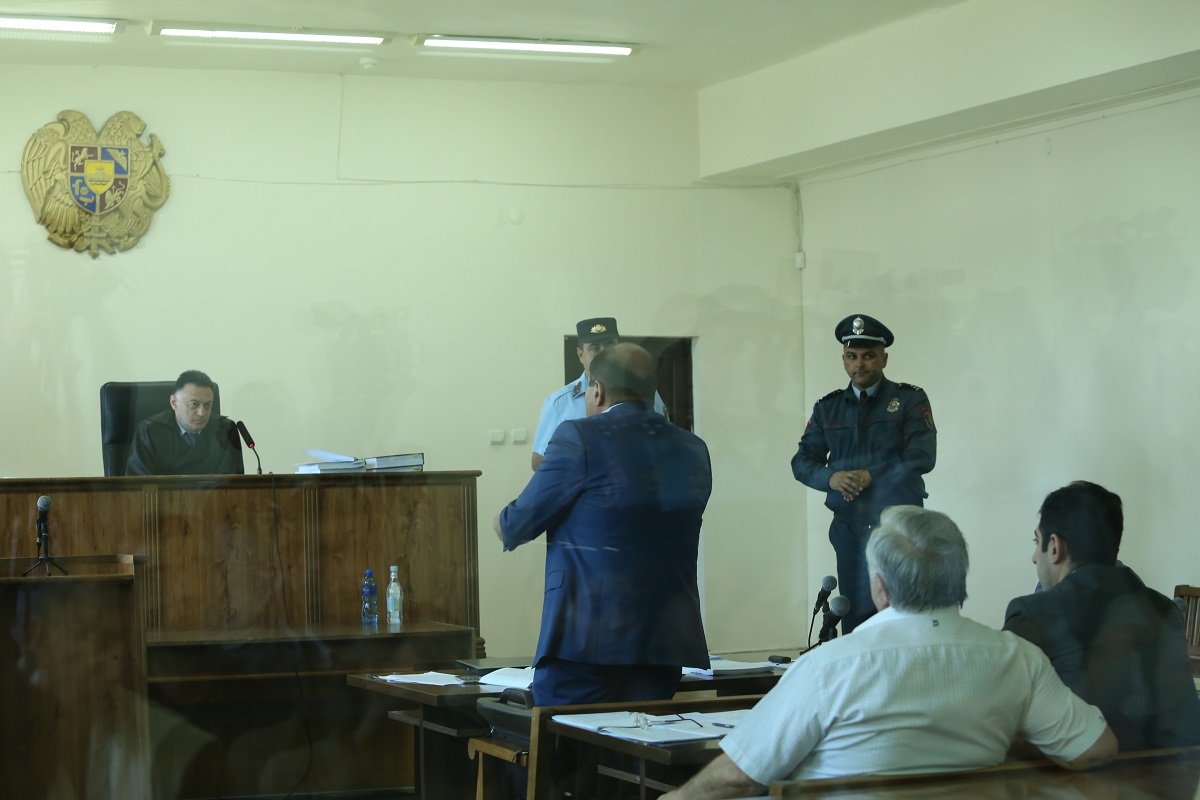 The court hearing which considered the petition to release Kocharyan on bail began on May 13. Kocharyan himself was present at the court session, and his supporters greeted him with encouraging shouts and chanted: ‘Freedom.’

On the first day, the lawyers of the second president demanded the judge recuse himself, and provided three reasons for him to do so.

They noted that the Prosecutor General Arthur Davtyan, who is heading the prosecution, appeared in the courtroom from the side of the service entrance which in turn, the lawyers said, leads them to believe that the judge is not maintaining neutrality.

The second point of grounds for recusal, the lawyers say, was that the judge would have been unable to familiarize himself with 80 volumes of materials submitted for the case.

The third reason was the disciplinary punishment of Judge David Grigoryan. Previously, he refused to consider the question of preventive measures against Robert Kocharyan, and the Supreme Judicial Council issued a warning to him for this.

On May 7, the case was again transferred to David Grigoryan.

Judges refuse to preside over the Kocharyan case

David Grigoryan is not the only judge who has tried to avoid presiding over the case.

The Supreme Judicial Council issued a remark to judge Nelli Baghdasaryan and a warning to judge Harutyun Manukyan.

Justice Minister Artak Zeynalyan said that the Supreme Judicial Council will decide whether there are political overtones in the judges’ recusal.

Clashes outside the courtroom

Outside the courtroom from time to time there were clashes between supporters and opponents of the ex-president. 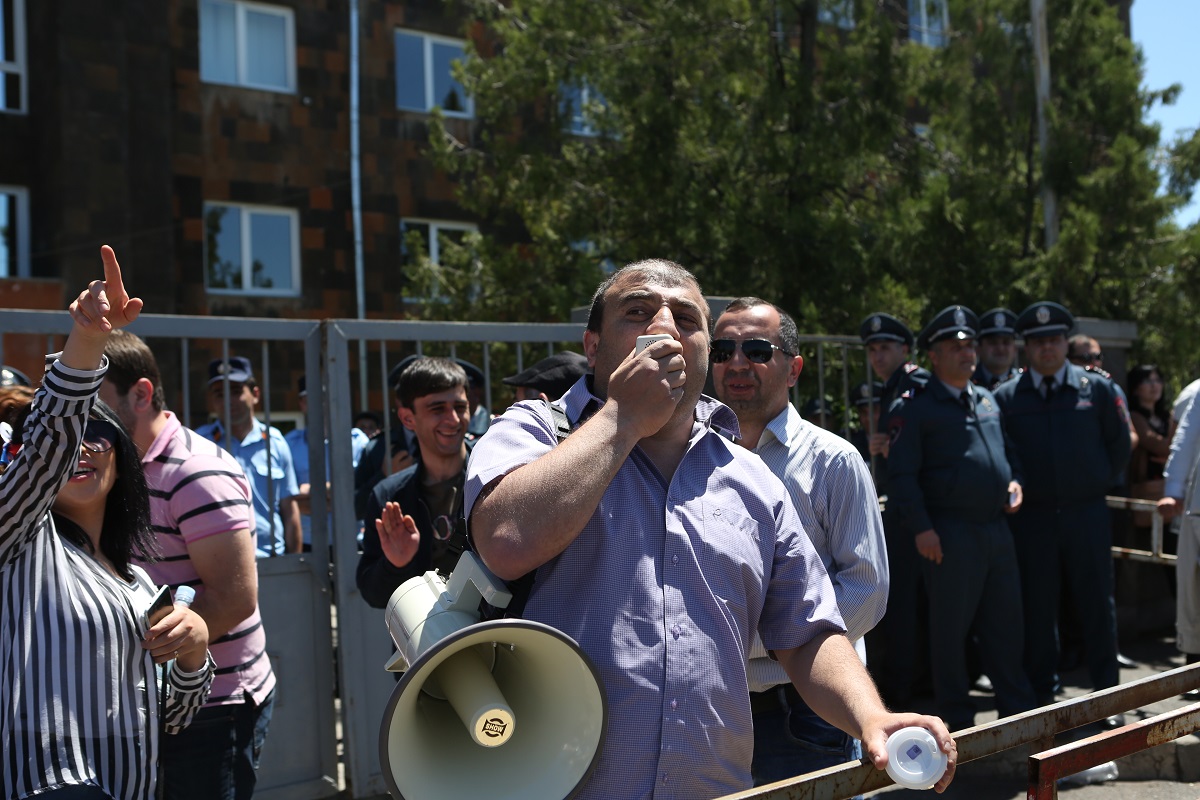 Kocharyan supporters came with posters “A fair trial without vendetta” and chanted: “Freedom to Robert Kocharyan!”.

Civic activist Vardges Gaspari – known for his lying down demonstrations – came out on the first day changing “Robik the Killer.” This angered Kocharyan supporters, who considered this behavior a violation of Kocharyan’s presumption of innocence. A scuffle began, supporters of the second president pulled a poster from the hands of the activist, and one of them hit Gaspari in the face with a bottle. 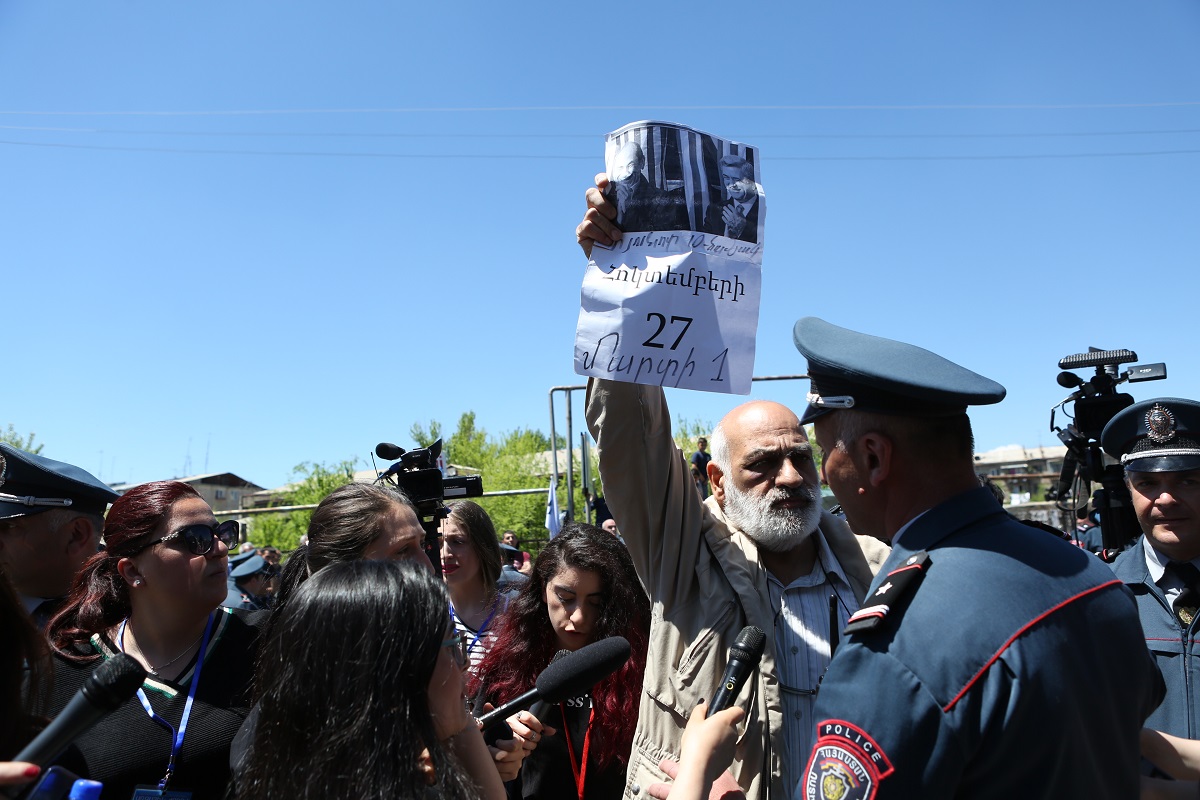 • Political prisoners by definition. What aboutGaspari?

The police periodically had to separate the demonstrators. Three Kocharyan supporters were detained, two voluntarily submitted themselves to the police. All detainees were released. The investigation into the incident continues.

Demonstrations in support and against the release of the ex-president continued on the second day of the case, beginning a few hours before the court hearing. The situation was extremely tense, and the police lined up between the participants of the two demonstrations to prevent a clash.

Details of the trial session

On the second day, the judge first announced his decision to refuse Kocharyan’s lawyers request for his recusal.

The prosecution then demanded that Kocharyan remain in custody until his trial date, saying Kocharyan may impede an objective investigation of the case if he is to be let free.

The defense first submitted a statement from the current and former presidents of Nagorno-Karabakh, Bako Saakyan and Arkady Ghukasyan.

They asked the court to release Kocharyan on bail and declared their readiness to act as guarantors that Kocharyan would not interfere with the progress of the investigation at large.

The lawyers continued to insist that the trial is political revenge. They presented in detail the situation in which Kocharyan is accused from the point of view of his client.

Several times Kocharyan himself intervened in the statements of his lawyers and expressed dissatisfaction with the work of the investigators and the preliminary investigation as a whole.

“People are interrogated, and when [the investigators] see during the interrogation that they do not receive the answer they need, they no longer go deep, do not ask essential questions, do not continue. That is the crux of the matter. I think that these people should come here [to court] to testify”, said Robert Kocharyan.

The 1 March case and the charges against Kocharyan

Kocharyan has been in prison on charges related to the 1 March 2008 case since December.

At the time, Kocharyan was the outgoing president. Presidential elections were held in late February 2008, according to which the Central Election Commission announced Serzh Sargsyan the victor.

Protestors came out in support of the first president of Armenia, Levon Ter-Petrosyan, and demanded a recount.

The demonstrators were dispersed with military grade weapons and soldiers. 10 people were killed as a result.

Kocharyan has thus been accused of brutally dispersing the demonstration and overthrowing the constitutional system.

The investigation of the March 1 case did not move a single step forward since its occurrence until the Armenian Velvet Revolution, when revolutionary leader and PM Nikol Pashinyan made it a cornerstone of his government’s administration.

From that day on, the second President of Armenia has been in prison.

Human rights activists believe that the authorities were forced to take this step under the pressure of international structures.

The younger son of the ex-president, Levon Kocharyan, also told reporters that the accusation against his father was Pashinyan’s personal revenge:

“I believe that the accusation is personal revenge, and naturally, I agree with all that my father says, with what our lawyers say. You see that there were a lot of facts that proved our point of view.” 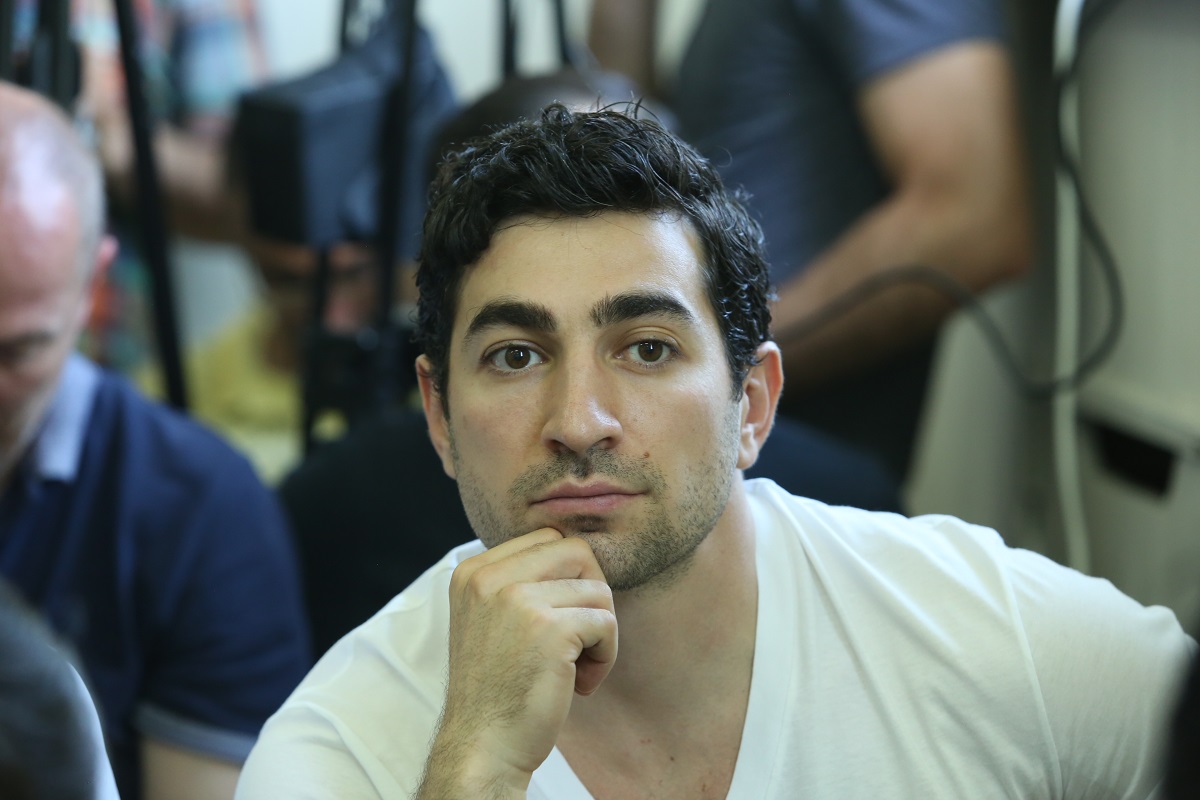 When asked what these facts are, Levon Kocharyan answered:

“The phrase ‘If you want to or not, you must make an arrest.’”

This is a phrase that was heard in an audio recording of a wiretap of the conversation of the heads of the security forces of Armenia – the National Security Service and the Special Investigation Service.

The head of the investigative service, Sasun Khachatryan, says in the recording that he is going to indict Robert Kocharyan and receive a court decision allowing him to arrest the ex-president.

The Armenian media was informed that the wiretapping was organized by supporters of Robert Kocharyan.

Who else is involved in the 1 March case?

In this case, there are three more former high-ranking officials:

Former Minister of Defense of Armenia Seyran Ohanyan (in 2008, he served as Chief of the General Staff of the Armed Forces),

Former Chief of the General Staff of the Armed Forces, former Secretary General of the CSTO Yuri Khachaturov (in 2008, he served as RA Deputy Minister of Defense, head of the Yerevan garrison), and:

Former Deputy Prime Minister Armen Gevorgyan (in 2008, he served as Chief of Staff of the President and Secretary of the Security Council).

All that remains in Babayli