The Armenian public is actively discussing a recording of a telephone call between the heads of the Armenian National Security Service Artur Vanetsyan and the Special Investigation Service Sasun Khachatryan.

In the recording, Khachatryan and Vanetsyan discuss the criminal case concerning the events of 1 March 2008, in which former president Robert Kocharyan has been indicted, in addition to former minister of defence Mikael Harutyunyan and the Secretary-General of the Collective Security Treaty Organization (led by Russia) Yuri Khachaturov.

The events of 1 March 2008 resulted in the deaths of eight civilians and two policemen after the government called in the military and police to disperse demonstrators protesting the results of the 19 February 2008 elections. Protestors supported Armenia’s first president Levon Ter-Petrosyan, claiming that he had won the elections and that the voting results should be re-examined.

The Central Election Commission announced instead that Serzh Sargsyan had won. At the time, the president of the country was still Robert Kocharyan, who decided to impose a state of emergency.

The head of the investigation service, Khachatryan, says in the audio recording that he intends to charge Robert Kocharyan and issue a warrant for his arrest. He also says that he intends to charge the Secretary-General of the CSTO, Yuri Khachaturov. In response, the head of the National Security Service, Artur Vanestyan, tells him ‘not to touch Khachaturov’ because such an act may complicate relations with Russia.

“He is the head of the CSTO – don’t touch him, we’ll embarrass ourselves. Maybe just house arrest…” Vanetsyan said.

“We shouldn’t shut him down? We already have him. Well, speak with the PM [Pashinyan] then, because I told him that I would have him [Khachaturov] arrested,” responded Khachatryan. 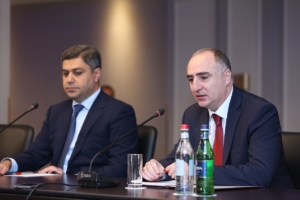 The audio recording was published on Youtube with a translation of the dialogue in English. Armenian social media users have already noted that the Armenian names and last names are written in the subtitles with Russian-influenced phonetics and spelling.

After the recording was published, Armenian PM Nikol Pashinyan stated that it is necessary to find the perpetrators of the wiretap.

Several hours later, Artur Vanetsyan and Sasun Khachatryan held a press conference, where they confirmed that the recording was real and that the head of the National Security Service was abroad at the time of its recording.

“There was a conversation. This is a worrisome fact, into which a thorough investigation will be conducted. The source and perpetrators of the recording will be uncovered. If I am not mistaken, a criminal case has already been launched and handed over to the prosecutor’s office,” Artur Vanetsyan said.

Both Vanetsyan and Khachatryan said that the publication of the audio recording was meant to weaken justice structures in the country and present obstacles towards solving the 1 March 2008 case.

Journalists asked whether they would resign. Vantesyan and Khachatryan answered that they do not intend to.

“I’m not grasping onto this post. I took up this position with much responsibility and there is much work ahead. But if society or the political leadership will demand [that I resign], I am ready to leave,” Vanetsyan said.

That evening, PM Pashinyan again commented on the audio recording, and said that the perpetrators of the wiretap were ‘traitors to the nation’.

“The wiretap of the heads of the special services is a conspiracy, a crime against Armenian statehood. I have instructed the National Security and Police Service to find the conspirators in the shortest amount of time possible and hold them to the utmost accountability. These hidden forces and illegally armed groups will be discovered and destroyed.”

Pashinyan and the heads of the country’s special services say that this incident can be assessed as an attempt to stop the string of anti-corruption cases in the country.

Prime Minister Pashinyan has instructed the heads of the Armenian police and the national security service to conduct raids against the guards of oligarchs and high-ranking officials.

“So-called guards should be put on the asphalt and disarmed. In two hours, the head of the National Security Service Artur Vanetsyan and the head of the police Valery Osipyan must report to me about the measures taken and the results achieved. Nobody will escape justice.

We have the police and the National Security Service, and I demand that they establish order across Armenia.

If I see that they cannot do this, then I myself know how to. I will again put on my camouflage and we will establish order across Armenia: street by street, home after home.”

Easter liturgy in Georgia to go ahead despite coronavirus crisis ﻿

Easter liturgy in Georgia to go ahead despite coronavirus crisis ﻿