How will Abkhazia keep the lights on?

That’s the question on many people’s mind at the moment: last winter was very difficult, with the electricity going on and off regularly, at times for days, leaving apartments cold, showers without hot water and the population without access to the internet.

It’s winter again, and the electricity problem is again looming.

The only source of electricity in Abkhazia is the Ingur Hydropower Plant. The water level in the Jvar reservoir has fallen so low that it is rapidly approaching a critical level, when the generating units will have to be shut off.

The Ingur/i hydroelectric station [ed. Abkhaz and Georgian spellings] is a unique plant, as it is located directly in the zone of the Georgian-Abkhaz conflict and is the only joint Georgian-Abkhaz project.

According to an informal agreement between Tbilisi and Sukhumi, 40 percent of the electricity generated by the station is consumed by Abkhazia, and 60 percent by Georgia.

But for Abkhazia, the station is practically the only electricity supplier.

By January 25, the water level in the reservoir is 447 meters, and the threshold for shutting off the turbines generating electricity is 420. The rate of decrease in water is one meter per day. And this means that after 27 days the power plant units will have to be turned off.

This past winter has seen little snowfall, which is one of the reasons for the critical water level.

One doesn’t have to be a climate expert: just look at the mountain peaks around the Jvari reservoir to conclude that the weather is not the same as five, and even more so, 10 years ago.

It’s already the end of January, and the hills are grey with only rare white spots of snow.  Winter is ending, but there is still no snow: this means that in the spring there will be no water.

• Has Abkhazia’s war on corruption finally taken off?

Abkhazia will again have to look for an alternative source of electricity.

“High consumption in Abkhazia, which is about nine million kilowatt hours per day, plus dry winters have depleted the reservoir much faster than before,” said Levan Mebonia, Chairman of the Board of Directors of the IngurHPP.

In 2019, at this time, the water level was 10 meters higher.  And in 2018 – even higher. All this is happening because electricity consumption is constantly growing.”

The only alternative source of electricity is overflows from Russia, which have been saving Abkhazia for the past three winters in a row.

To inspect the situation, specialists from divisions of the Russian federal network company InterRAO visited the reservoir on January 25.

It was an unofficial, and even, one might say, illegal visit. First, experts crossed the border of Abkhazia with Russia along the Psou River, which Tbilisi considers illegal, and then passed to the Georgian side through the Inguri Bridge.

Therefore, Russian experts refused official comments to reporters. But in an informal conversation they shared some information.

“We were sent to make sure that everything that the management of IngurHPP and Chernomorenergo is talking about is true,” a representative of InterRAO said.

“And we were convinced that climate anomalies are not the only reason for the rapid consumption of water.”

The main factor is human, namely the growth of electricity consumption by the population of Abkhazia.” 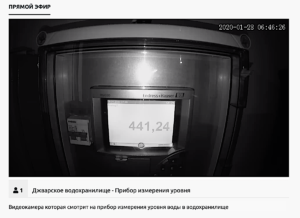 In winter, Georgia is not powered by the IngurHPP; numerous thermal power plants generate electricity. But in Abkhazia there is no such alternative, so the reservoir of the hydroelectric power station is depleted to critical levels.

In the control room of the pumping station, a counter is installed which in real time shows the water level in the reservoir. Opposite is a camera that broadcasts an image online.

The low level carries risks not only for the population of Abkhazia, but also for the hydropower plant itself.

The operation of the IngurHPP is also a security issue.  In an accident at a dam, not only the whole of Abkhazia and the adjacent regions of Georgia can suffer, but also Turkey and Russia.

The hydroelectric power station cannot work more than its resources allow for.  Stopping the work of the station is always a reasonable step, but providing electricity to the population is of course a priority.

The problem can be solved if Russia gives Abkhazia electricity for a while, until the reservoir is replenished. At the same time, in Abkhazia they will again introduce a system of rolling blackouts for several hours, in different areas in turn.

But most experts believe that Abkhazia should begin to save energy.

How to reduce wasteful electricity consumption in Abkhazia

Both in Georgia and in Russia this issue is being decided by raising tariffs for electricity.

“It is very comfortable to turn on all the heaters in the house and open the window for fresh air.  But it is very irrational. People have such a mentality – you can’t make them save while the electricity is cheap,” said Levan Meboniya, Chairman of the Board of Directors of IngurHPP.

Whether such a fate awaits Abkhazia is an open question.  At least, so far the question has not been raised in the offices of the relevant ministries.