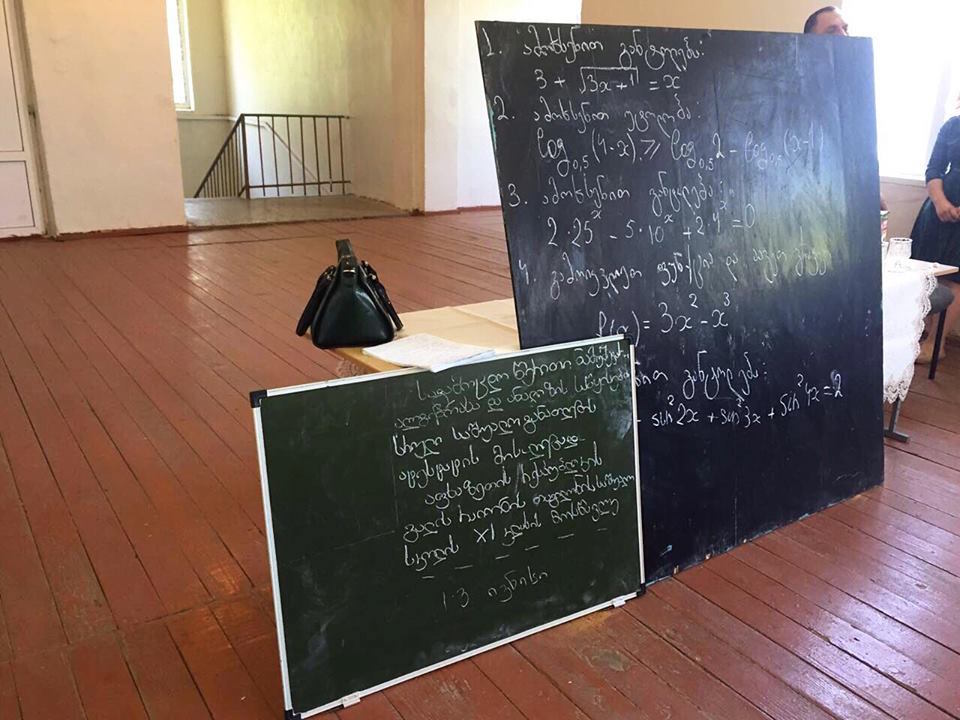 I noticed long ago that once you say, you are going to Gal, it immediately raises questions and causes surprise bordering on sympathy. The same Gagra that is also ‘far-off’ does not cause such a reaction.

And no wonder, since Gal is remote, dangerous and almost “non-native”. That’s the picture portrayed by nearly all Abkhazian youth nowadays.

Actually no one out the young people around me has ever visited Gal. What is one supposed to do there? My friends do not travel to Georgia, no one has any relatives in the border villages, and we don’t know anything (I still have hope) about places of interest in Gal. They don’t even have the slightest motivation.

Meanwhile, several villages of the Gal district exceed all of Ochamchira in number in terms of population.

Gal didn’t really exist for me for a long time. There was neither any of me in Gal nor Gal in me. I only remember that six years ago, there was a guy from Gal, travelling with me in the same carriage on the Sukhum-Moscow train. He had been living in Moscow for a long time, was employed at one of the city restaurants and was incessantly advocating for the rights of the Gali population, though I didn’t even think of infringing them.

It was then that I first thought that somewhere in a parallel universe, there is life going on that we don’t know about.

I have visited our country’s easternmost town about five times over the past two years. And each time became the most unique in comparison with the preceding ones. Gal is like someone’s unfulfilled dream.

It is hard to find a common language with the locals, in the true sense of the word. I tried with Russian, Abkhazian and even with Armenian language, but it was all in vain. Dozens of people came up to me and sent me on my way with a broad smile and eyes full of misunderstanding.

I remember how shocked I was after visiting Gal schools: there were placard newspapers in the Georgian language, people speaking Megrelian, seals of Georgian educational agencies on the school manuals and children singing Georgian songs in the school hall. It was sort of a mirror-world.

A new curriculum was introduced in Gal district schools on September 1, 2015. The priciple part of the educational process was be conducted in the Russian language. Some additional hours have also been allotted, giving teachers a chance to explain a subject in their native language.

When was Ardzinba born?

It was June 13, 2016, in a lower part of Gal. The 11th grade of the Tagilon village secondary school was taking an algebra exam.

There were 14 students finishing school this year. Each of them was sitting at a separate desk. The desks and blackboards had been taken out to the first floor corridor, boys to the right, girls to the left. The task was written on the board in Georgian letters. The remainder of my knowledge in the sciences was hardly enough to differentiate between one inequality, one function and three equations.

The school’s math teacher did not speak Russian at all. The school principal came up to me and showed the Abkhaz Education Ministry’s envelope, in which the exam was sent. Of course, it was in the Russian language. Timur Jologua, the school principal explained that they had to translate it into Georgian, otherwise, the children would not have understood the task.

The principal led me to a girl sitting in the second-to-last desk: “This is an excellent student! However, as it turned out, the girl was an excellent student only in math. I failed to get her to talk. Smiling and sincerely embarrassed, this girl muster the answer “I can’t to each of my questions, though they were much easier to answer them than the relation of functions and plotting them on a chart.

While this was going on, Temur Nadaraia, the Head of Gal Administration, started his meeting with the school’s teachers in the staffroom. I entered the room and listened attentively. The conversation concerned passports. The teachers still didn’t understand any passport related issues. Nadaraia was explaining this to them slowly and persistently.

“Those who don’t have Georgian citizenship will be granted Abkhazian citizenship, but these kind of people are few and far between, Nadaraia started explaining again.

The dialogue came to a halt.

“So, you view yourselves as citizens of Abkhazia. Tell me, please, when was Lenin born? Temur Nadaraia suddenly asked the teachers. “On April 22, 1870, the teachers answered collectively.

“And when was Vladislav Ardzinba born? the head of the district administration addressed the teachers. A hush fell over the room. The teachers started naming each month in turn and then trying to guess the date. All in vain.

A 50 year-old attractive lady was sitting silently in the corner. She was wearing a long pinafore dress, had large and beautiful eyes and a tired look on her face. “May 14, 1945, Eshera, she uttered.

Temur Nadaraia continued, asking about the date the Abkhaz People’s Patriotic War began. An even more jarring silence fell over the room. Everyone was looking at the woman. It was obvious to me that she knew the answer. The woman certainly knew. Nadaraia asked some more questions, but Galina Ivanovna and I could no longer hear them.

Galina Ivanovna Ardashelia has been working in Tagilon secondary schools for 28 years. In 1988, she was called Galya Yuryeva from Poltava. She moved to Tagilon when she got married. She received a qualification to become the Russian Language teacher. Little has changed in her life since that time. However, Galina Ivanovna now speaks Georgian and Megrelian even better than her native language, Russian.

Sometimes she visits her mother in Poltava. Of course, she travels via Georgia. Galina Ivanovna Ardashelia is a citizen of Georgia, but we did not talk much about that.

“Abkhazia…it’s beautiful, a rich region, with nice people. Abkhazian people are very loyal; they will never betray you, says Galina Ivanovna. “We are teachers and we don’t have much to do with politics. Our business is to teach the children. My youngest daughter passed her math exam today. She wants to enroll in the faculty of journalism in Sukhum.

“Do you know why they didn’t answer the question about Ardzinba? she suddenly asked me. “They do not understand even 50% of what Nadaraia is telling them. They would have probably answered if they had understood it. We celebrated Ardzinba’s 70th anniversary last year. Galina Ivanovna recalled.

“We won’t leave here. This is our home, here in Abkhazia. Both of my older daughters are married in Georgia, but when they travel here, they say that are going to Abkhazia. Even my little granddaughter says that her grandmother lives in Abkhazia and not in Georgia, says the teacher.

“People may agree to renounce Georgian citizenship. Look at what a nice road they constructed for us. There are no electricity problems now. I think there isn’t much left they can do.

Probably having anticipated my question, Galina Ivanovna started telling me how it was to teach the Russian language in Gal. “It’s very difficult. Developments in Abkhazia prevented many parents of these children from getting an education. Some of them did not even attend school at all. In fact, they don’t know any language, let alone Russian. It is hard to give the children everything they need in 45 minutes in such an environment, says the teacher.

At the same time, Galina Ivanovna praised her students. She said the children are doing their best. They can read well and write dictations decently well. The main problem is that they have a very limited vocabulary and writing compositions is out of the question.

This year, those who were finishing school took a dictated Russian exam. They passed it without much trouble. The Abkhazian Education Ministry provides Gal schools with Russian language textbooks.

“The curriculum is very complicated for our children. They don’t really know any language. When a child comes to our school, he/she can only speak the Megrelian language. Georgian and Russian are both foreign languages for them. I think the situation with literacy in Russian will gradually improve. The parents have a keen interest in it, Galina Ivanovna summed things up for me.

My main Russian language teacher’s name was also Galina. Though her real name was Alekseevna and she lived in Mayak, in Sukhum. I wonder if Tagilon school students like Russian literature? I wish I could communicate with them.

I randomly entered one open classroom on the ground floor. Girls of about 14 years of age were engaged in a stormy discussion. They fell silent upon seeing me. I tried to explain to them: “I don’t understand a single word, anyway. So, you can continue chattering. The girls burst into laughter and waited to see what I would do next.

“Have you been looking forward to the summer? I ask the schoolgirls. “Yay! Holidays! one of them shouted out in broken Russian and they all started laughing together. I shared their joy about the long-awaited rest – holidays.

There were a series of placard newspapers in the corner of the room. All of them were in Georgian, but the illustrations left me the impression they came from a biology class. I found an inscription in familiar letters (in Russian) on one of the Whatman papers that read: ‘Time capsule.’

Indeed, Gal is a real time capsule. And I am starting to like being placed inside it from time to time. 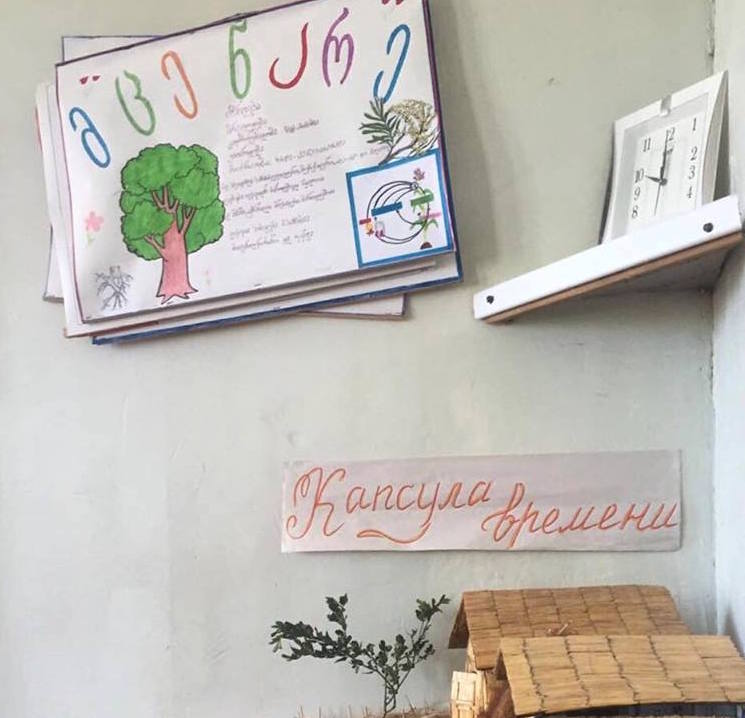