10 off the beaten path tourist sites in Baku

A simple stroll along the streets of Icheri Sheher (Old City) will not be enough to fully comprehend Baku’s atmosphere. There are many other landmarks that Bakuvians love or just appreciate as an important part of their lives. These places will never be seen from a birds’ eye view, nor will it make it onto a postcard – and that’s a pity, as there is something special about each of these places.

• A place where anything can be found: 28 photos from Baku’s ‘New Bazar’

The following article is not merely based on the opinion of the editorial staff; rather, we consulted Baku residents to find out what is important and remarkable about each of those localities for them.

A large ‘market of everything’ which is commonly known as the ‘eighth bazaar’ is located here. Here you can buy anything from building materials for interiors and repairs, to fixtures and fittings for bathrooms and kitchens, even clothing, fruit and vegetables. The bazaar would make an ideal topic for a novel or saga, and is also a gold mine for artists who do portraits. The bazaar is known for having the best prices.

There are also ‘elite’ prostitutes conducting business under a bridge nearby. Their services cost as much as two rolls of wallpaper at the market, or, for example, a shower curtain.

• Sex-tourism in Azerbaijan: an Arabian summer

The sea is near this metro station, and there are plenty of newly built apartment houses as this area is relatively ‘young’. A stunning ‘urban’ sunset can be observed from the upper floors which is certainly underappreciated by photographers. The latter tend to take sunset photos on the beach.

Residents from the city center tend to wonder if this location actually forms part of the city. Technically, it falls under the south-eastern outskirts of the city. When a Baku resident complains that he has no money to buy an apartment, he would say that he’ll have to go somewhere to Ahmedli. Ahmedli residents, in turn, claim that they have the most fertile land, the cleanest air as well as the juiciest and cheapest meat in BBQ cafés.

There is also the ‘Monument to Liberated Azerbaijanian’. A busty liberated Azerbaijani woman symbolically tears off her veil right in front of the Iranian bank, though her heroism lost its ideological significance when Azeri women, who voluntarily covered their heads with scarfs, appeared in the street after the collapse of the Soviet Union.

It’s the most ambiguous out of the aforementioned places. First of all, this street is no longer called Inqilab, but people refuse to call it by its new, ‘real’ name. When residents say ‘in Inqilab’, they are referring to either the area near the State Students Admission Commission (also known as TQDK), or a lengthy row of sanitary-ware shops.

As for the State Commission, it’s no longer there. In other words, the old building was demolished, but the landmark has remained, and only God knows for how long this place will be referred to as TQDK. In other words, we navigate by using an object that no longer physically exists in a street that is no longer on a map. But who cares? The main thing is that people can find each other.

The ‘Pandora’s Box’, as one of the Baku residents termed it, opens ‘after 2 pm’. A couple of institutes and the Baku State University make Elmlar a ‘student area’ with a large concentration of Turkish fast food outlets per square meter. The cheapest döner is also available here. After 2 pm it becomes really hard to push your way through the noisy crowd.

This is actually a ‘cottage settlement’, especially the part that is closer to the sea. If you lived in Baku as a child, you were probably quite happy when the sea finally appeared in the car or bus window, far away, behind the sand and monotonous brick houses.

There are many wonderful things in Mardakan such as grapes and fig trees beyond low brick fences. On the way to the beach, you can jump out of the car for a minute to buy bread from a tandoor (a clay oven dug into the ground). Don’t forget the the sandy beaches with long shoals.

It’s an important transport hub, and, at the same time, a commercial center. Here you will find bookstores, a large shopping mall, a railway station (which has been repaired just recently and is quite beautiful now), a KFC, the Oil Academy – you name it!

What do residents say is most noteworty about May 28 metro station? A talking traffic light. It was installed rather recently at the shopping mall exit, where there was just a zebra crossing before. For some reason pedestrians were reluctant to observe the traffic rules at this area. The police made a truly all-out effort, fining citizens all day long before they decided to change tactics and focus on the traffic lights. The traffic light sounds like a human filled with resentment. While there is a red light on, it aggrievedly grumbles: ‘Wait. Wait.’

It has officially been called the Bakikhanov settlement for quite a long time, but no one actually refers to it like that. Fewer people know who Stepan Razin is and how this name came to Baku, but it has stuck so much that people will more likely forget the ‘five-storey building’ than him.

What makes Razin remarkable is a strip of wood with a tragic fate. There used to be a wildlife isle there, where one could do sports and picnic. Now it is littered, flooded here and there and partially built up. Yet there are still some areas where you can take a stroll, if you are not afraid of the stray dogs that dwell there now.

This is by no means the end of the list as the city is quite large. But, unfortunately, not all of our acquaintances live on the top floors, so we’ll have to come down to earth. 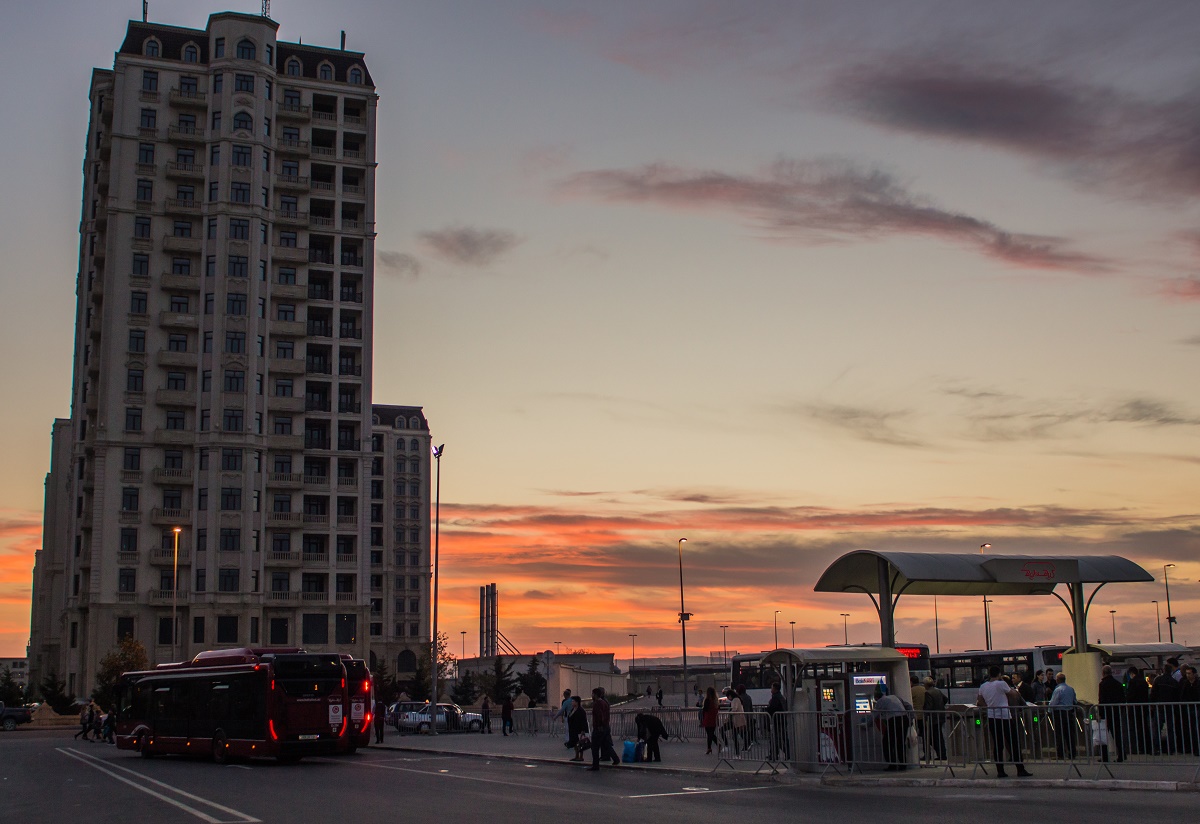