15-year-old Luka Siradze passed away on 17 December after jumping out of the ninth floor of a residential building in Tbilisi on December 11.

Lawyers and parents of the teenager claim that Luke was psychologically abused by the police, where he was interrogated several hours a day before his tragic act.

Activists have been holding a rally since the evening of December 17 near the hospital where Luka was being treated and by the police station where he wa interrogated.

Dozens of people have brought flowers and candles and demand a fair investigation and punishment of all those responsible for exerting pressure on the boy.

The investigator who interrogated the teenager has been detained.

Graffiti at school – why Luka was detained 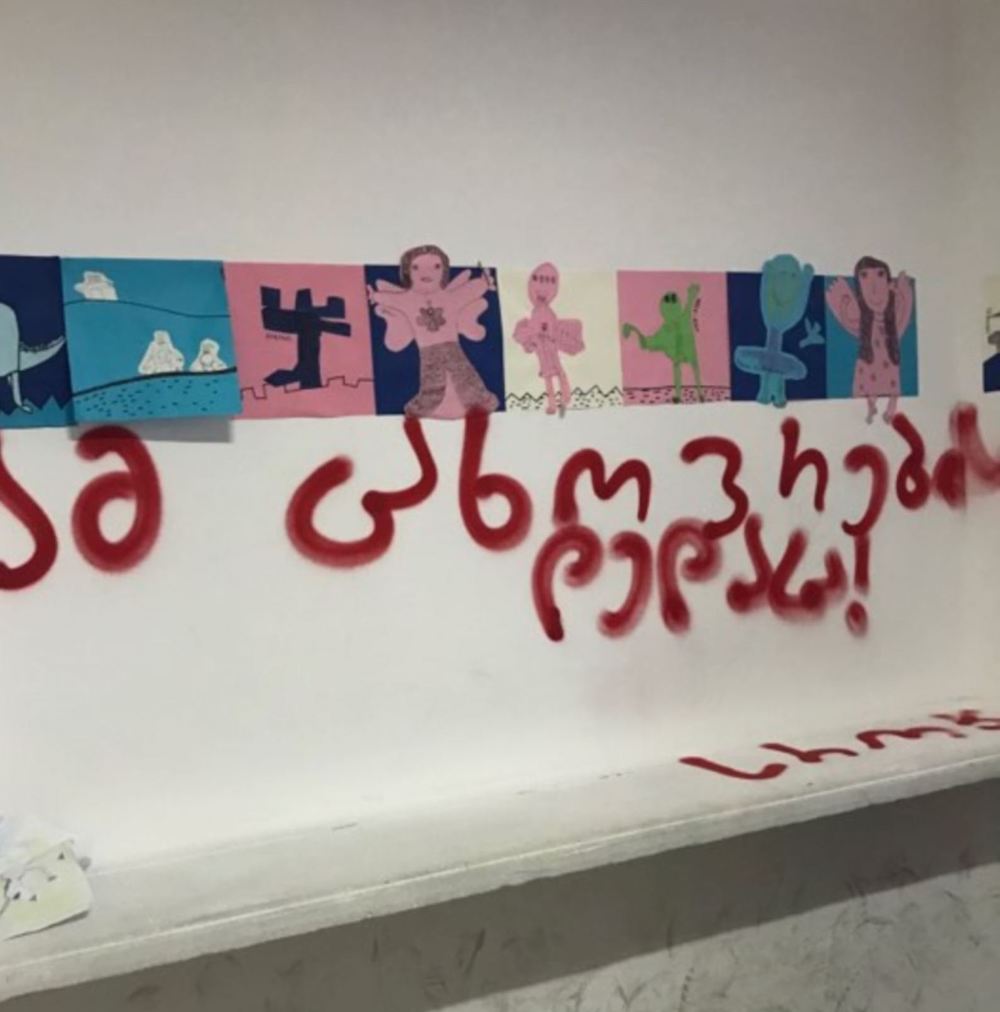 The tragic story of Luka Siradze began on December 9.

On the morning of December 9, students and teachers at Green School, a private school in Tbilisi, came to classes and found large red letters with vulgar content in many places.

The inscriptions were on the walls in the corridors, classrooms, on blackboards, cabinets, and even on top of paintings and drawings hanging on the walls.

“[F*ck] your mother, f*ck this life” was written in many places in huge red letters.

Another text reported: “Try to catch me.”

Some inscriptions were in English and contained obscene words.  There were also obscure hieroglyphs and signs.

The school principal, Bakur Sulakauri, said the cameras installed in the school were smeared with paint.  Therefore, school guards who immediately began the investigation were unable to identify the person who entered the school.

“After that, we acted in accordance with the law. We contacted the police, as it is a matter of child safety,” Bakur Sulakauri wrote on his Facebook page.

The police on the same day identified the person who entered the school by studying the recordings on cameras installed in the area around the school. The investigation concluded that this was a former student of the 10th grade of Luka Siradze’s school.

It was earlier established that he came to school at night and inscribed alone. On December 10, Luka Siradze was detained.

Luka Siradze studied at Green School for only a few months, then the family transferred him to a public school. The school’s administration and teachers say that neither he nor his family had any problems with the administration, teachers or students.

“On the records of surveillance cameras, we can see how he emerges from the darkness and goes to the school. We can’t explain in any way why he did this, we are completely amazed by this,” the school director said in an interview with RFE/RL.

What happened at the police station

According to family lawyer Rezo Adjaradze, on December 10, Luka Siradze was taken to the police station with his mother at 5 pm, and they remained there until 11 pm.

Several police officers participated in the interrogation. The boy was insulted and threatened, the lawyer said. 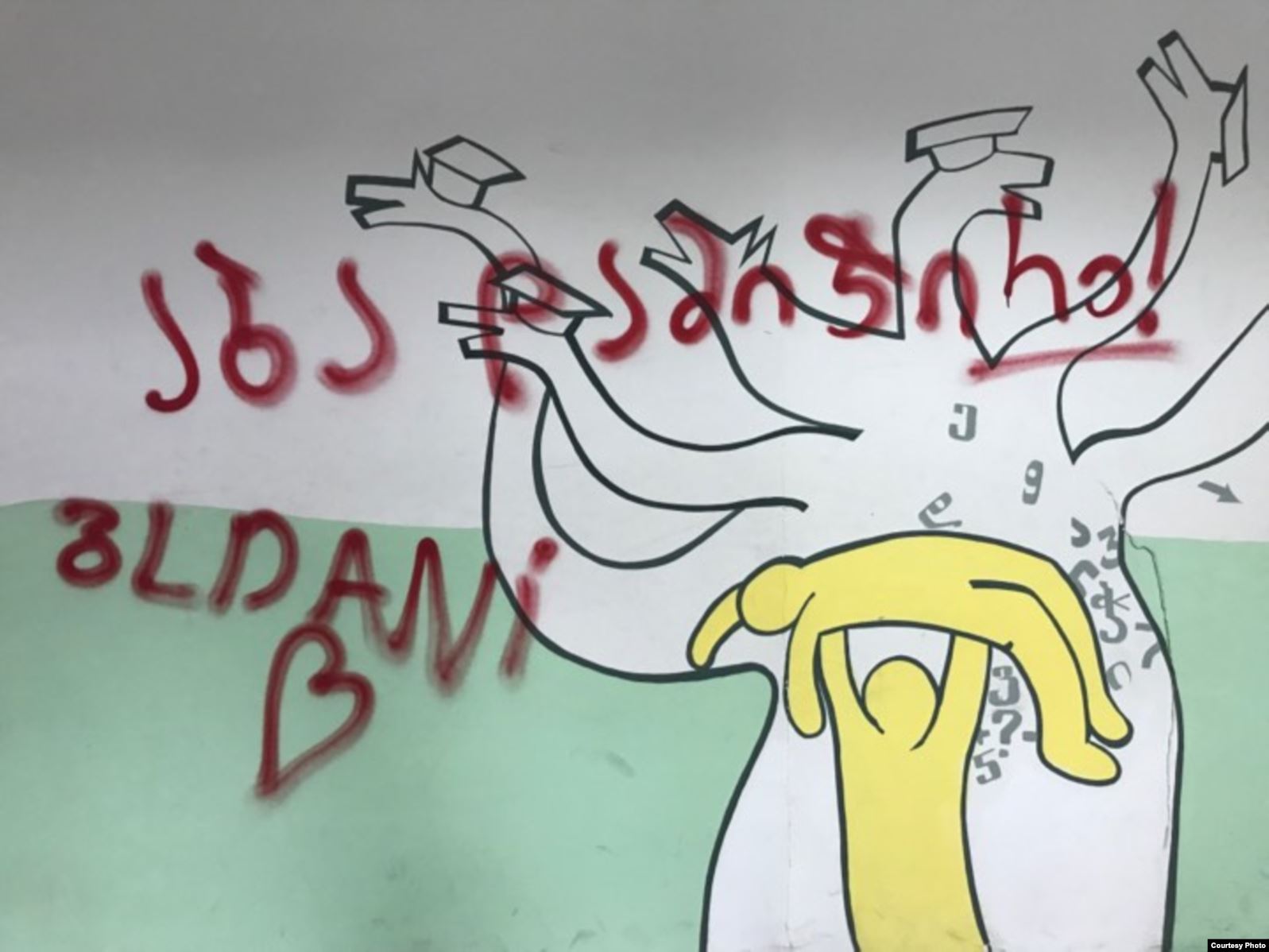 The head of the police department also participated in the interrogation. The boy’s mother says he took him out of the room for a few minutes.  When Luka returned to the room, he was all in tears.

The lawyer, citing Luka’s mother, said that very strong pressure was exerted on the boy, and the mother herself was also scared.

Luka, however, did not admit to the deed.

He was released home late in the evening, and in the morning of December 11 the interrogation resumed.  The teenager again refused to plead guilty.

Then, according to his mother, investigators said that “in this case, they will investigate the matter as they see fit.”

The Georgian Young Lawyers Association, which has taken control of these cases, claims that intimidation and threats brought the teenager in such a state that he began to ask for a doctor. However, medical assistance was not provided to him.

Luka returned home from the police station in the afternoon of December 11th.

At 15.00 he left the house.  And after two and a half hours, he jumped from the ninth floor of a nearby apartment buildings.

What does the police say?

The Georgian Ministry of Internal Affairs categorically denies that pressure was exerted on the teenager.

The mother’s words that Luka was taken out of the room for a while were also refuted.

However, later the Ministry of Internal Affairs reported that two policemen had been dismissed in connection with the Luka Siradze case.

And on December 17, a few hours after it became known about the death of the teenager, representatives of the Ministry of Internal Affairs held a briefing at which they announced the start of an investigation against Investigator Marianna Choloyan

Human rights activists report that this investigator had been particularly cruel before, and they had already demanded her dismissal more than once.

A campaign has begun on social networks in Georgia, including against the administration of Green School.  Many say that they should not have called the police. Instead, they should have turned to social services and a psychologist.

However, school principal, Bakur Sulakauri, replies that the school itself could not find out who entered the school and left the inscriptions.

“We did not know if we were talking about an adult or a teenager, and we could not know in any way whether psychological help was needed here or not. We defended the safety of all students in the school,” says the principal. 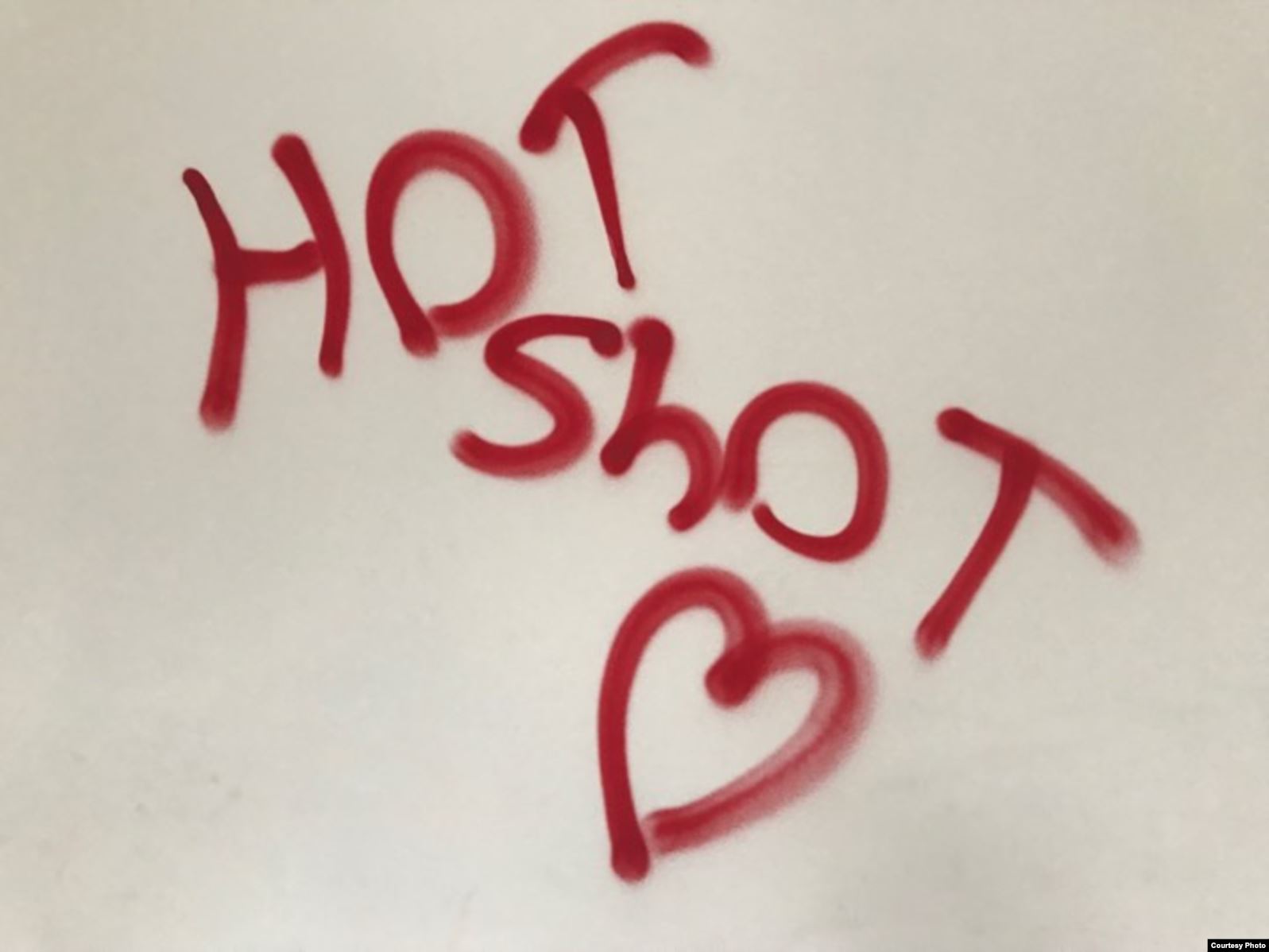 “It is clear that society in Georgia does not trust the police, and this is a huge problem,” says Maia Tsiramua, a child psychiatrist.

She believes that in that specific situation, when the school could not independently find out who entered the building, the administration had no choice but to call the police.

Tsiramua says the most important thing is to find out how police officers behaved at the time,.

But it’s also important to understand why the boy came to school at night to write graffiti.

“If it was a protest, then against what, and why in this school?  We need to find out what happened in this matter so that this does not happen again in the future,” Tsiramua wrote on her Facebook page.