Convicted in Russia in relation to the August 2008 war

On 29 July, the President of the Russian Federation, Vladimir Putin, pardoned Annik Kesyan and Marina Dzhandzhgava, two women who were convicted of treason and received long prison sentences for having sent SMS messages to Georgia in 2008 about the open movements of Russian military.

In April of 2008, Sochi resident Marina Dzhandzhgava and Annik Kesyan sent messages to their friends in Georgia via SMS, in which they said that the Russian militia was moving towards Abkhazia. This was several months before the war in South Ossetia, with many residents of Sochi seeing the echelons of the militia moving along the railroads in the direction of Abkhazia without any attempts at covering it up.

For these SMSs, Dzhandzhgava and Kesyan were sentenced to 12 and 8 years respectively.

In this group there was a total of 6 women, whose case as a whole received the title of ‘Women’s affair’ . In March of 2017, one of those convicted was freed before her term was over, Oksana Sevastidi. One year before that, in June of 2016, Ekaterina Kharebava was also released on a pardon.

At least two of those involved in the ‘women’s affair’ remain in prison: Inga Tutisani and Manana Kapanadze.

The Russian human rights group ‘Komanda 29′ followed the cases of these women closely. The group consists of lawyers and journalists. Its creators are lawyers Ivan Pavlov and Evgeni Smirnov. On Komanda 29’s website, the team states they provide legal support to those who have been ‘unfairly accused of treason, divulging state secrets and espionage’.

The cases of the six women convicted for SMS communications are very similar. Below we have published the story of Komanda 29 on how these women were forced to admit to treason and how their story got out only in 2016.

Marina Dzhandzhgava worked for 25 years as a conductor of the Adler passenger car depot.

“They came in 2012 on 2 October. They came on three or four ‘gazelle’ trucks, as one does for a repeat offender. They all wore masks, with machine guns. They started checking all the rooms: hers, mine and my son’s. They didn’t find anything, but they took her. They said that they would return her in the evening. They tried her, and they accused her of only god knows what crimes,” says Marina Dzhandzhgava’s mother, Tamara Dzhandzhgava, about the arrest of her daughter.

Marina Dzhandzhgava was the first to be convicted for sending an SMS to Georgia. On 1 November 2013, she was convicted of committing treason and sentenced to 12 years imprisonment.

Marina’s mother new that her daughter had been talking with a Georgian friend, but neither of them ascribed any importance to this.

“Why should she have been interested in those tanks in 2008? She had seen the war in Abkhazia. She had many sores, she had an operation done on her thyroid, and her heart had issues. And they didn’t even give me information about her health condition. My son went to Sochi, and there she was on the list, and they said that someone had told the head doctor [of the prison] not to reveal any info on Marina,” said Tamara Dzhandzhgava.
“She tells me: “Mom, I had to say yes, there is no truth in this, mom, you won’t find a trace of it.” She says, this Troyan [Roman Troyan, the investigator in the cases of Kesyan, Sevastidi, Kharebava, note from Komanda 29] was threatening her, forcing her to sign a confession. And then, she says, she decided, ‘to hell with him’, I’ll serve [my sentence]. I have no husband – he died, my daughter died. She’s alone, at 59 years of age,” recounts Tamara Dzhandzhgava.

The 79-year-old mother went to Sochi to see her daughter in the Vologda correctional facility every four months. 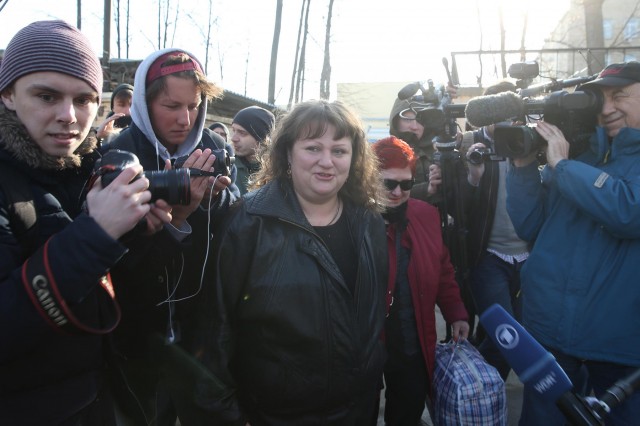 Annik Kesyan was born in Adler, and got married when she was 19. She left with her husband to live in Gagra (Abkhazia) but in 1992, with the beginning of the Georgian-Abkhaz war, her entire family left for Russia. Her daughter Violetta married a resident of Georgia, and she often went to see her.

In Adler, Kesyan worked at a clothing market, and then started her own cooking business.

“She made pelmeni (dumplings) and jams at home; she had her own clients, who are still waiting for her to get out because they want her products. What treason is there here, what is this all about really?!” her daughter, Violetta Revazova, says angrily.

Annik Kesyan was friends with a Georgian by the name of Mamuka Lukava. When in the Spring of 2008 he wrote her an SMS, asking whether the Russian military was actually advancing on Abkhazia, she replied, ‘Yes, they are’.

Many residents of Sochi saw the militia, so Annik didn’t even think that the open transit of it could be considered a state secret.

The next six years passed quietly, and she forgot about that exchange.

In September of 2013, she was called to the FSB (Federal Security Service of Russia) on two occasions for questioning. Half a year later, her apartment was broken into and a search was conducted. After that, they took her into the police station. There, says Kesyan, one of the employees of the FSB hit her face and said,

For the next half a year, investigations were conducted into the case. The same investigator, Roman Troyan worked on the case as he did with many of the other individuals convicted in the same affair.

It turned out that her friend to whom she had sent the SMS worked with Georgian intelligence. Of course, this information has been proven only by a piece of paper that has been provided by the security services of Abkhazia itself.

Annik Kesyan recounted that at court, when she was asked whether she had understood that what she did was illegal, her lawyer nodded to her so that she would confess to indeed having such an understanding. Then, when the verdict was read, she unexpectedly ‘found out’ that she had allegedly written the number of tanks that were headed towards Abkhazia, which she would not have been able to know.

In the summer of 2015, Annik Kesyan was convicted of treason and was sentenced to eight years in prison. Kesyan admitted to her guilt during her interrogation. She was defended in court by a state-appointed lawyer who felt that there was no reason to file an appeal.

Commenting on the confession of her mother to her guilt, Violetta Revazova says:

“She did everything out of fear, and only fear: and out of fear we didn’t tell anybody anything, we have only now began to return to our former selves.” 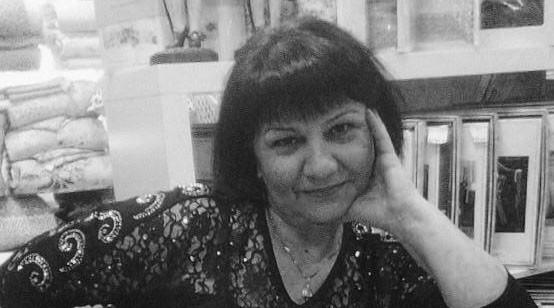 Oksana Sevastidi spoke about Kesyan’s story – she too was accused of treason. She was released in March of 2017 on a presidential pardon by Vladimir Putin.

In April of 2008, Oksana Sevastidi received an SMS from a Georgian acquaintance, who asked: “Are there tanks standing on the platform [by you guys]?” She responded: “They were before, but now I don’t know.”

In 2015, she was arrested and sentenced to seven years. She was lucky: she was in prison for only a year. The public found out about her after an article concerning her fate, and after a question posed to Vladimir Putin at a press conference.

Oksana Sevastidi was pardoned and her lawyers Ivan Pavlov and Yevgeni Smirnov were able to commute the pardoned sentenced to three years. 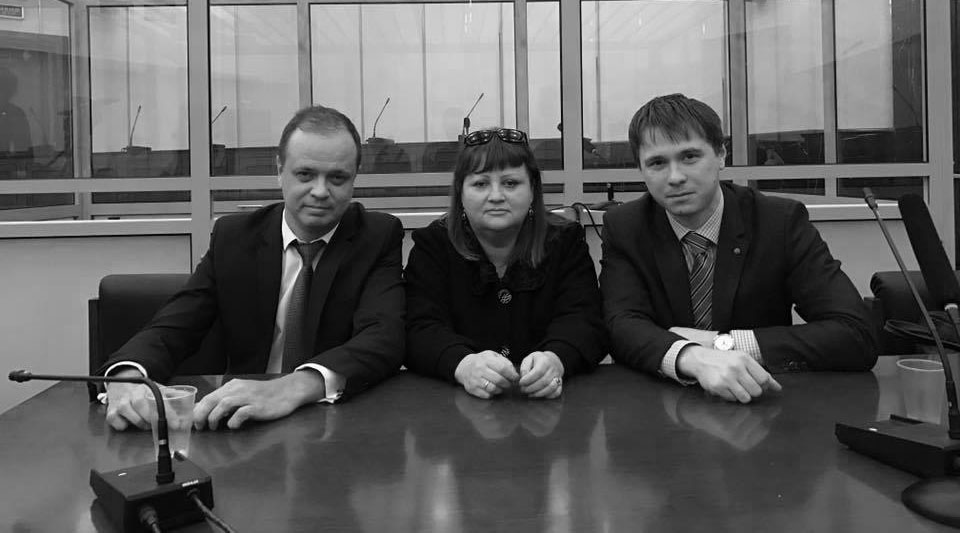 Oksana Sevastidi has been pardoned, while her lawyers Ivan Pavlov (left) and Yevgeny Smirnov managed to have her prison sentence reduced to three years (the photo is from Pavlov’s FB page)

On 30 April 2008, Yekaterina Kharebava saw tanks on the railway tracks of Sochi and wrote an SMS about this to her acquaintance in Georgia. They came to arrest her only five years later in 2013.

Kharebava was sentenced to six years in prison for espionage given that she was a citizen of Georgia.

Yekaterina Kharebava considers herself not guilty. Her lawyer Leonid Yerchenko told Komanda 29 that before he had gotten involved in the case, Yekaterina had already signed a confession admitting to espionage. The investigator, and later the state-appointed lawyer, advised her to sign, saying that she would receive a shorter sentence.

“She ‘recounted’ everything and signed, because she didn’t see any trick at play here. It turned out, they [the FSB] were already gathering material in order to open a criminal case [against her].”

Kharebava was freed in 2016 according to a Russian-Georgian agreement on the mutual freeing of citizens. As reported by Komanda 29, it was Kharebava’s daughter and her lawyer that appealed to the Georgian government and forced them to pay attention to her case. 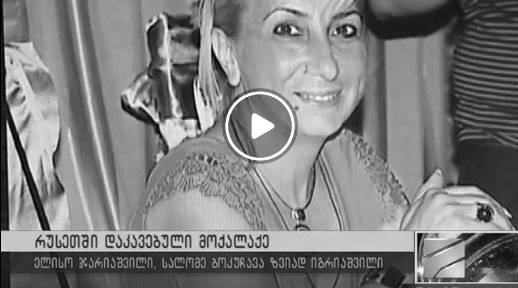 In the summer of 2014, a Krasnodar court convicted another two women of treason: Inga Tutisani and Manana Kapanadze.

“In the cases concerning treason in the Krasnodar court, the investigators always ask suspects to not tell anyone about the case, to not request a lawyer, to not get in touch with journalists. They promise that the case will be solved quickly and simply, that they will receive short sentences but then it all ends up rather differently [for them],” says Sevastidi’s lawyer, Ivan Pavlov, commenting the conclusion of her case.

According to his information, from 2010 until the middle of 2016, 87 people were convicted for treason.

“We don’t think that all the cases of the ‘Georgian spies’ have come to a conclusion. The wave of spy-mania after the five-day war has been continuing now for 9 years already,” says Ivan Pavlov.

In August of 2008, the conflict around South Ossetia exploded into a five-day war which involved Russia and Georgia. According to Georgia, Russia prepared its troops to fight in advance, while the actions of Georgia were a response to this armed threat and provocation from the side of the South Ossetian authorities. According to the Russian side, Russian soldiers entered the region in order to protect civilians and peace-keepers. After the five-day war, Russia recognized Abkhazia and South Ossetia as independent states, and diplomatic ties between Moscow and Tbilisi were severed.

Around 80 000 residents of Georgian villages on the territory of South Ossetia left their homes and joined the already large group of refugees in the country.

Housing issue: in Armenia, middle class will not be able to afford apartments in new buildings