Why are Karabakh Armenians restoring a mosque?

One might have thought that the restoration of the Govhar Agha mosque in the city of Shushi in Karabakh, which suffered greatly during the Karabakh war in 1992-1994, would stir the local community.

One would have thought that many locals would pass by every day, to monitor the progress of the work and discuss this event which is very unusual for Karabakh.

• Karabakh in the everyday lives of Azerbaijanis

• Three years of the “April war” in Karabakh. What has she changed? Experts in Baku and Yerevan

But the site was largely empty when a JAMnews reporter arrived: there were just several workers at the construction site, two boys riding bicycles in front of the mosque and one could hear two grandmothers talking from two open windows on the top floor of a five story building. It almost looked as if they were building some sort of residential building.

But minarets towered behind the scaffolding, and this view was completely new, one could say unique for post-war Karabakh. 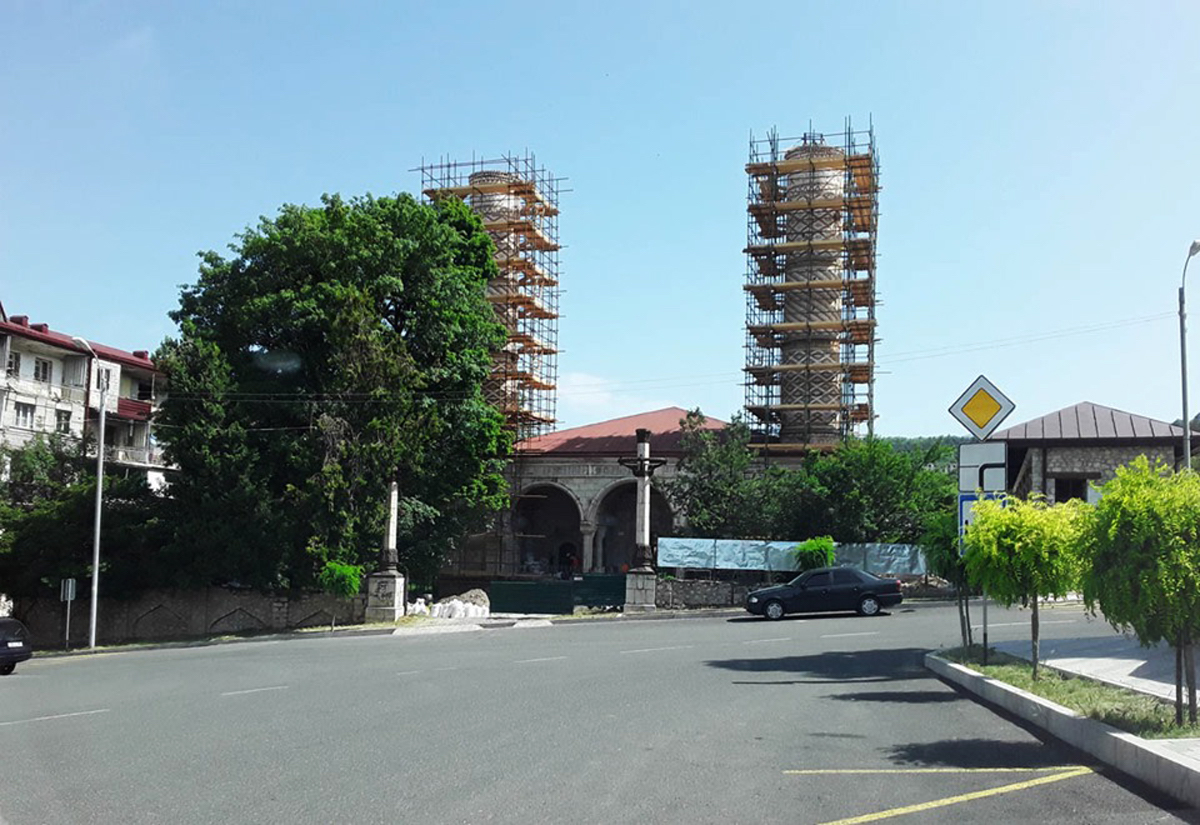 The Gohvhar Agha mosque has long not had a flock – and the issue isn’t that the mosque has been destroyed for 25 years, but rather that there will be nobody to pray here once it is finished.

Before the military phase of the Karabakh conflict in the 1990s, the majority of the population of Shushi were Azerbaijanis. But they left their homes during the war, and now the area is exclusively settled by Armenian Christians.

The question locals are asking is: why is the mosque being restored, especially when residential buildings and commercial areas are needed?

A short film on how the Govhar Agha Mosque in Shushi is being restored, by Knar Babayan and Albert Voskanyan

“For us it is a matter of preserving the historical and cultural heritage, regardless of religious or cultural affiliation ,” said Arman Grigoryan, head of the cultural monuments department of the Ministry of Culture and Sports of Nagorno-Karabakh told JAMnews.

The Armenian-funded Eastern Historical Heritage Foundation is responsible for the restoration work, but the work itself is being carried out in close cooperation with Iranian specialists with the support of ICOMOS-Armenia and ICOMOS-Iran.

• On the Karabakh conflict – based on the stories of three women

Locals consider the mosque to be of Iranian heritage, and this is precisely how they explain Iran’s active participation in financing the restoration work.

But the financing of the project comes from another completely unexpected source.

Initially, the IDeA Foundation, the government of the Nagorno-Karabakh Republic and the Armenian Revival of Oriental Historical Heritage Foundation launched a joint mosque restoration program.

On Forbes list of 50 richest businessmen in Kazakhstan, Boranbayev ranks 13. He owns the McDonald’s network in Kazakhstan, Belarus, and Russia, and has close family ties with Nursultan Nazarbayev, the former president of Kazakhstan and now informal leader.

Azerbaijani IDPs from from the city of Shusha [ed. Azerbaijani spelling of the town] recall in a conversation with JAMnews their past and the Govhar Agha mosque.

The history of the Govhar Agha mosque

Govhar Agha is also known as the Upper Mosque, given that it is located on the higher planes of the town.

Ashot Harutyunyan, a native of Shushi and head of the local history museum, said that there were 12 madrassas in Shushi. Now they are all in a dilapidated state.

The Upper Mosque in Shushi was rebuilt in 1883 by order of Govhari Beyim-Agha, the granddaughter of Panah Ali Khan, the founder of the city of Shushi. The mosque was restored by the architect Karbala Sefihan of Karabakh.

Govhar Agha was built in a style typical of the Karabakh region, with a two story gallery nestled between two stone columns.

On the main facade of the mosque, inscriptions are preserved and are now being restored – surahs from the Qu’ran in Arabic.

The mosque was converted into a historical museum during the Soviet era, but before the start of the war had been newly restored.

Shusha/i, located on the trade route between the Russian Empire and Iran, was the capital of the Karabakh Khanate, and was one of the most developed cities in the South Caucasus during the 19th century.

For some time, the mixed Azeri and Armenian population lived in peace. However, at the beginning of the 20th century relations between them deteriorated. In 1920, Armenians were forced to flee after a series of pogroms which left many dead.

Azerbaijanis became the new majority in the city.

However, following the violent suppression of riots against Sovietization, the Azerbaijani population was forced to flee to Iran and the regions of Lower Karabakh.

The Armenian population began to return, but this again did not last.

In 1923, Nagorno-Karabakh was established as an Autonomous Region of Azerbaijan by the Soviet Union. Azerbaijanis again became the majority of the region.

In the 1960s and 70s, Soviet micro districts were built over the historic Armenian quarters in Shusha.  Slowly, Azerbaijanis from other regions of Karabakh occupied this new housing – but not of their own free will.

In a 2002 interview with Echo newspaper, then president of Azerbaijan, Heydar Aliyev, is quoted as saying, “there was no work force in Stepanakert itself [in the 1960s and 80s]. Azerbaijanis were sent there from places surrounding the region. With these and other measures, I tried to have more Azerbaijanis in Nagorno-Karabakh, and the number of Armenians reduced.”

As a result of these measures, the Azerbaijani population in Susha grew to 85 percent (1979 census of the USSR).

Representation in government was also balanced. As a rule, the first secretary of the district committee of the Communist Party (the main local authority) was Azerbaijani, and his deputy was Armenian.

The same went for the police force.

During the 1991 – 1994 Armenian-Azerbaijani armed confrontation the city of Shushi became especially significant. The city is located at an altitude and from there it was possible to shell the capital, Stepanakert, and nearby Armenian villages.

On May 8, 1992, fierce battles took place outside the city. The Karabakh Self-Defense Forces won and the Azerbaijani population was forced out of the city.

The Govhar Agha mosque was seriously damaged during these battles. Scars left by artillery shells are still visible on its walls.

Since the ceasefire in 1994, the Nagorno-Karabakh Republic exists as a de facto independent republic, not recognized by any state in the world, including Armenia. Azerbaijan considers Karabakh and its surrounding territories occupied, and demands their return.

Parties to the conflict regularly report contact line battles and blame each other for provocations.

A survey among residents of Shushi regarding the decision to restore a mosque.

Journalist Albert Voskanyan asked local residents their opinion on the restoration of the mosque:

“So, in a year there the mullah will pray and convince Muslims to pray and call for the destruction of the Armenian population, as was the case in 1988-1990.”

“This is just the authorities flirting with each other, nothing more – nothing but politics. This mosque was built by those who captured this country, why bother to restore the traces left by them when our churches are dilapidated.”

“Thousands of families have no housing, but there is money to restore the mosque. They should be ashamed.”

“Culture should not suffer as a result of human conflict and hatred. Ignoring necessary restorations is a disregard for the cultural heritage of this country. ”

“It is very correct that it is being restored! A true manifestation of Christianity! Respect and not ruin! This is a story that cannot be thrown out, they lived there, and this mosque is part of the cultural heritage of this city. ”

“Azerbaijanis considered the mosque theirs and visited it. Now they do not live in Shushi, but this is not a reason to turn the temple into a stable, and even more so to demolish it. “

“I am against the destruction of cultural monuments, wherever they are. In Iran, our temples are being restored and guarded, why not do the same here? And what’s the problem anyway? It’s another touristic attraction for our city.”