Who will become the new president of Abkhazia? Details on the candidates

Background on the scandals surrounding the Abkhaz presidential elections

On September 8, 2019, Raul Khajimba won the second round of the presidential election in Abkhazia and went on to serve a second term. The opposition protested and stated that there had been no victory, since Khajimba won only 47 percent of the vote, while the law required a simple majority of 51%.

The situation became much worse when in November, a high-profile triple murder was committed in a popular restaurant in the center of Sukhumi in broad daylight. After some time, it turned out that among those who carried out the attack were members of President Khajimba’s guard.

On January 9, 2020, around a thousand people, including relatives and friends of those killed, stormed the presidential palace and demanded the president’s resignation. That same afternoon, the Supreme Court declared the election results invalid.

And on January 12, Raul Khajimba announced his resignation.

The new presidential election was scheduled for March 22, and Prime Minister Valery Bganba became the interim president until that time.

Candidates — who could be the next president of Abkhazia?

While there were nine candidates in the previous election, this time there are only three. 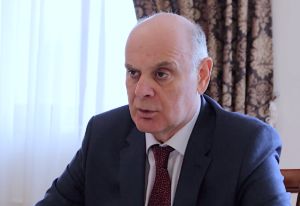 Aslan Bzhania is a candidate from the united opposition, and many people call him the opposition leader.

Bzhania was considered the favorite in the 2019 elections. However, one month before the presidential race, in mid-April of 2019, he was suddenly hospitalized in critical condition in Moscow. He was later flown to Germany, where a doctor diagnosed his illness as heavy metal poisoning, in particular, mercury and cadmium.

Bzhania himself has no doubt that he was poisoned in order to remove him from the running. Police have yet to confirm.

Adgur Ardzinba is running as an independent candidate.  He is the current Minister of Economics of Abkhazia and at 39 years old, is also the youngest candidate.

For many in Abkhazia, Adgur Ardzinba is associated with the current government, that is, the one represented by Raul Khadjimba before he was forced to resign in January.

In Abkhazia, many are openly saying that Adgur Ardzinba is also closely associated with Inal Ardzinba, the former head of the Russian President’s Department for Social and Economic Cooperation with the CIS States, and now chairman of the Youth Affairs Council under the Russian Patriarch Kirill. 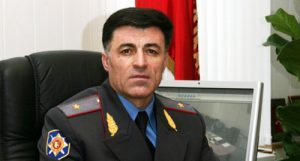 Leonid Dzapshba was nominated by his own party, “Akzaar.” He is a former Minister of the Interior (from 2010-2011, and then from 2015-2016) and has been the president of the Football Federation of Abkhazia since 2007.

Dzapshba is called the traditional candidate in the presidential race, as he is running for the third time.

He ran for the first time in 2014, then in the elections in 2019. Both times, he received about four percent.

A four percent margin may be decisive in the upcoming presidential election, so his electorate may become important for those who theoretically enter the second round.

•Abkhaz opposition leader on Georgia: “For those who don’t know geography, we’re neighbors”

•More on the presidential elections in Abkhazia

•Coronavirus has not reached Abkhazia — yet

•Coronavirus ‘hostages’ – these Georgians left Abkhazia for a couple of days, but cannot return home

•Current legislation states that only an ethnic Abkhaz can be elected president.

•All candidates must be between 35 and 65 years old.

•To register as a candidate, you must pass an Abkhaz language exam held by a special commission of the Central Election Committee (CEC).

A presidential term, as stated in the constitution, is five years. One person can serve no more than two terms.

However, in all Abkhazia’s years of independence, no president, including the first president Vladislav Ardzinba, has spent two full terms in the presidential chair.

Second President Sergei Bagapsh passed away in the middle of his second term.

The next two leaders of Abkhazia — Alexander Ankvab and Raul Khajimba — left office early as a result of an acute domestic political crisis.