President of Abkhazia Raul Khajimba has signed his resignation letter under pressure from mass opposition protests that began on January 9. 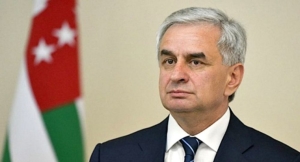 Prior to this the parliament called on him to resign, and then the Supreme Court ruled to annul the results of last presidential election in September 2019, effectively removing him from office.

However, Raul Khajimba refused to leave the post and stated that he would file a counterclaim.

There were also suggestions from the president’s circles that the current president would continue to work before a new president was elected in March.

In the evening of January 12, about 1,000 opposition supporters gathered under the president’s residence in Sukhum. Some protesters came there on foot from the presidential administration building, many arrived by car. These two buildings are approximately four kilometers apart.

Protesters demanded that Raul Khajimba immediately resign. After some time, the president replied that he would sign a statement if the opposition dispersed.  This offer  was greeted aggressively by the audience, and ten minutes later it became known that Raul Khajimba had resigned.

• Op-ed: how long will political groups continue to chase one another out of the Abkhaz presidency

The united opposition demanded the annulment of the results of the last presidential election since it took place on September 8, 2019.

At the time, Khajimba won in the second round of elections, with just a small majority: Khadjimba won only 47 percent of the vote, while the law requires 50 percent +1 of all voters.

On this basis, the opposition claimed the results were illegitimate.

The disagreement came to a head on January 9, when about a thousand opposition supporters first besieged the presidential palace, and then burst into it.

On January 10, protesters were supported by the parliament, which adopted a resolution proposing the incumbent president resign.

The president, who had been in an alternative residence at the “state dacha” all this time, refused to accept this recommendation and stated that he was ready for a dialogue with the opposition.

However, the opposition refused a dialogue; protesters said they would not leave the presidential administration building until Khajimba resigned.

As a result, on January 10, the Supreme Court took the side of the opposition and approved the decision to remove the president from office and mandated new elections be held.