As the helicopter whirred overhead, the warm-up act boomed out: “Recep Tayyip Erdogan is arriving!” Hordes of adoring fans frantically waved their flags and chanted his name.

Some elderly women fainted – from the excitement or the pressure of the crowd, it wasn’t clear.

As Turkey’s President emerged, a teenage girl thrust her phone into my hand: “Please, take a photo of me with him in the background,” she cried.

Their hero had arrived.

European leaders may recoil at the Turkish president’s outbursts this week – labelling the Dutch and German governments “Nazis” and “fascists” – but here, in his conservative, religious heartland, Recep Tayyip Erdogan can do no wrong.

‘What would we have done without him?’

We joined his campaign rally in Sakarya, 160km (100 miles) east of Istanbul, as he enthuses voters ahead of next month’s referendum on expanding his powers. The constitutional reform, changing from a parliamentary to a presidential system, would be the biggest political shake-up since the foundation of the Turkish republic in 1923.

Among the thousands-strong crowd in Sakarya, the word “evet” – yes – was emblazoned across flags and banners.

The current row was sparked when European leaders blocked Turkish ministers from holding referendum campaign rallies in their countries.

Last weekend, Dutch police violently broke up a protest in Rotterdam by the Turkish diaspora.

Two Turkish ministers were blocked from the Netherlands after Dutch Prime Minister Mark Rutte said they could stoke tension before that country’s election.

His hardline stance boosted his votes at the expense of the far-right Geert Wilders.

“Hey Rutte!” shouted Mr Erdogan. “You may have won the election but you have lost Turkey has a friend.” His supporters roared in approval.

The Turkish president went on to lambast “German spies”, “European terrorist propaganda” and the European Court of Justice for allowing companies to ban employees wearing religious clothing, including the Islamic headscarf.

“They are launching a crusade against Islam,” he thundered. “God damn your European values!”

His supporters lapped it up. They love the Turkish strongman standing up to Europe. Perhaps it is a relic from the old Ottoman empire, the idea of Turkey fighting off its enemies. And this is what Mr Erdogan stokes with such prowess.

But, frankly, whatever he would do or say, this constituency would agree. It’s as if pious Turks, who for decades felt like second-class citizens under Turkey’s old secular elite, owe their very survival to Mr Erdogan. Thanks to him, they are now dominant in this country – and he inspires a divine reverence arguably unparalleled among democratically elected leaders.

“I love him because I can study at university with my headscarf thanks to him,” Kubra Husnan told me, alluding to Mr Erdogan revoking the decades-old headscarf ban in state institutions.

What of his inflammatory rhetoric against Europe, I asked?

“I condemn Holland and Germany too,” she replied. “They don’t have a conscience.”

Standing beside her, pensioner Esma Koc chimed in: “Whatever he says is right – on every subject. If he appears to make a mistake, he must know something we don’t. What would we have done if he hadn’t existed?”

For Turkey’s other side – pro-Western, secular – this week has deepened the despair about the country’s direction.

Utku Tolunguc hopes to study at Maastricht University in the Netherlands but fears the impact of the current stand-off.

“Turkey should take a more pro-European path,” he told me. “The Netherlands now has a very bad image of Turkey and I’m concerned how this could affect me if I start living there.”

Turkey’s overwhelmingly pro-government media has pumped out the president’s message.

One front page this week showed Angela Merkel in Nazi uniform, while other headlines screamed “Dutch Nazi dogs” above a photo of a Dutch police dog biting a Turkish protester. 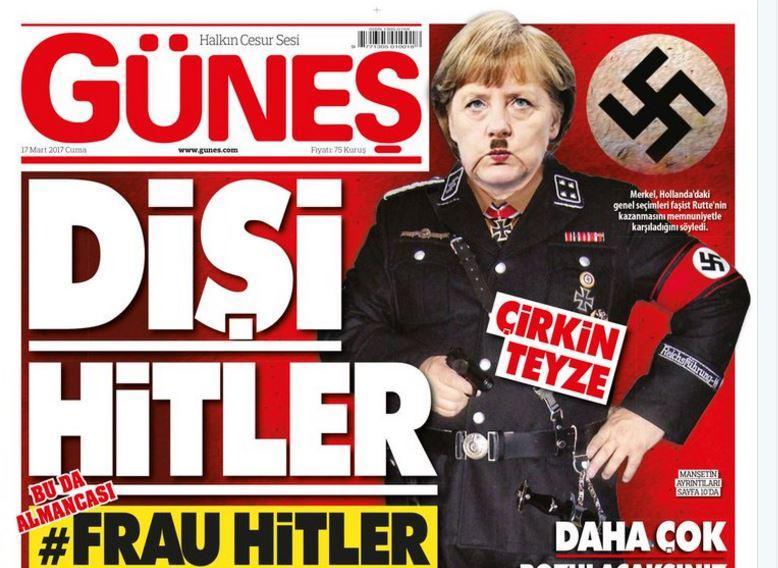 And dissent is increasingly hard. The airwaves and billboards are heavily weighted in favour of the Erdogan campaign. The president has equated a “no” vote with terrorism and leading opposition candidates have been attacked or blocked from campaigning.

The most prominent is Meral Aksener, a former interior minister and far-right politician who’s emerged as the most credible alternative to the president. A hotel where she was recently holding a “no” rally mysteriously had its electricity cut off during her speech.

“Turkey is becoming a laughing stock,” she told the BBC in a rare interview with the international media. “In foreign policy, you have to think before you speak. You cannot make empty threats. Foreign policy must not be misused for domestic politics.”
Go to top

President Erdogan has repeatedly won at the ballot box and could once again in four weeks.

But the country he’s leading – a crucial Nato member and EU candidate – is dangerously polarised and, after this week, sliding ever further from Europe.

Georgia will not permit gun transit through its territory

The ‘free fall’ of the lari - what is happening to the Georgian currency? Four scenarios

Baku supports its army: flags and symbols in the streets. Photo report

90 seconds: from orphanhood to adulthood in Armenia