Tskhinvali gives Tbilisi ultimatum over police post – what next?

The situation near the Georgian village of Chorchana, located on the so-called South Ossetian administrative border, has been tense now for two days.

The situation escalated after locals noticed heavy Russian equipment near the outskirts of the village, after which Tbilisi deployed a police checkpoint in the area.

Tskhinvali sees the checkpoint as a threat and has put an ultimatum to Tbilisi – to either take down the checkpoint or “we will ensure the security of the Ossetian villages ourselves.”

Tbilisi is appealing to the international community for help.

The Tskhinvali ultimatum expired at six o’clock in the morning of August 30.

In addition to the police forces, there are representatives of the Georgian State Security Service and the Ministry of Foreign Affairs, as well as members of the EUMM, on the ground.

Since August 28, residents of the village of Chorchana in Khashuri district have noticed the movement of Russian heavy military equipment, armored vehicles and Russian troops near their village borders.

The Georgian Security Service has confirmed the fact and the EU Monitoring Mission has been alerted.

The village of Chorchana in Khashuri district has been in the territory controlled by the central government of Georgia since August 2008.

Chorchana is about 110 kilometers from Tbilisi and is bordered by the Ossetian village of Tsnelisi, from which it is separated by a forest.

Chorchana residents say they saw about a hundred Russian troops near Tsnelisi, who had never been there before.  They also noticed armored vehicles moving along the dividing line.

The mobilization of Georgian police forces along the dividing line is not to Tskhinvali’s liking; de-facto authorities say the checkpoint is a danger to the entity’s safety because it is just 250 meters from the village of Tsnelisi.

The situation in Khashuri was to be discussed at the Incident Prevention and Response Mechanism (IPRM) meeting in Ergneti on August 29 with the participation of the Georgian, Ossetian and Russian parties, as well as representatives of the EU Mission, but the meeting was unsuccessful and ultimately failed.

At the meeting, Tskhinvali imposed an ultimatum on the Georgian side – they demanded that Tbilisi remove the checkpoint from the village of Chorchana by 6 a.m. on August 30.

Otherwise, as the Tskhinvali de-facto officials said, they would use their right to “ensure the safety of their own citizens.” At a meeting in Ergneti, Tskhinvali representative Egor Kochiev said that “the situation on the Georgian border is extremely tense.”

“We only have the demand for Georgian forces to leave the region,” he said. 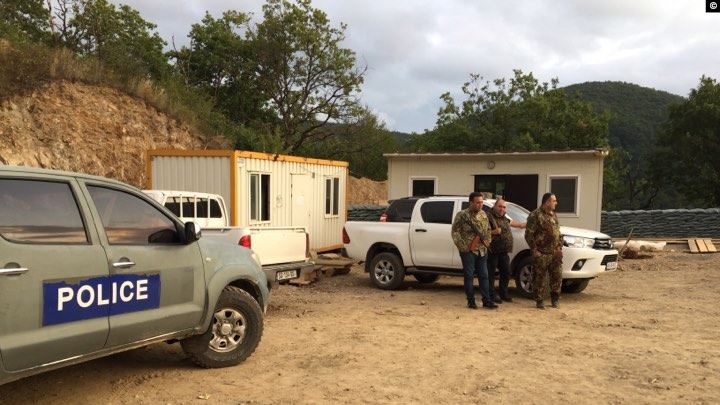 He says the residents of adjacent Ossetian villages are outraged by the appearance of Georgian forces and have addressed the Tskhinvali authorities for help.

“And they will get this help,” Kochiev says, claiming the Georgian police checkpoint is on the territory of South Ossetia, “as evidenced by maps and documents issued in 1922”.

The Georgian side says it will not consider removing the police post from Chorchana.

“This has always been the territory controlled by the central government of Georgia, as noted by the same EUMM, and this issue is not even being discussed (the blockade),” said Deputy Foreign Minister Lasha Darsalia, who attended the Ergneti meeting.

“Any allegation is groundless, only the Georgian state decides where to deploy its police posts,” Irakli Antadze, deputy head of the State Security Service’s (SSU) Information-Analytical Department, told reporters after a failed meeting in Ergneti.

He said the block post at Chorchana is a standard police post that does not pose a threat to anyone.

Tbilisi says full responsibility for the the situation in Chorchana lies with RUssia.

“The checkpoint is located on territory controlled by the central government of Georgia.  It has always been so, and it is now.  Consequently, any kind of ultimatum about where the Georgian state deploys its own police forces will contain a cynicism saturated with absurdity and, in the event of any complication, the Russian Federation will be fully responsible as the effective force exercising control over the occupied territories.”

The Ministry of Foreign Affairs calls on the Russian Federation to “stop illegal activities, fulfill its international obligations, including the August 12, 2008 ceasefire agreement and respect the sovereignty and territorial integrity of Georgia.”

The statement also notes that the Georgian Foreign Ministry has appealed to the international community “to respond appropriately to illegal developments on the occupation line and to take appropriate measures to stop them.”

Armen and his 'Aqua World' in Stepanakert