Istanbul: The city that is above sultans and presidents

A walk with a camera in Istanbul

Liveliness is a major quality of Istanbulers. A person was dancing happily in central Istiklal Avenue, side-by-side with those who were rallying in support of President Erdogan on the day of the referendum.  We asked him why he was ‘for’ the constitutional changes. He responded: ‘Who said that? I’m firmly against it!”

“Then why are you here, rather than with those who oppose it?” (their piquet was located some 30 meters away). “They have no music there.”

Turkey has been synonymous with the word ‘tourism’ over the past decade. Starting from 2006 and up until 2016, the country turned into one of the world’s most popular tourist destinations.

Only 3% of tourists required visas, which allowed Turkey to outpace other Mediterranean countries, like Egypt, by number of tourists.

Tourism already accounted for 13% of the national economy and provided about 2 million jobs in all concurrent fields. According to the Turkish Statistics Institute, the hospitality industry particularly developed in that period.

The turn came in 2016, with a sharp rise in terrorist attacks and tumultuous political developments in the country.

As is pointed out in the International Monetary Fund’s (IMF) report, terrorist attacks – 400 in just 2015, compared to an average of 70 annually between 2010 and 2014, resulted in a more than 30% fall in the number of European tourists who used to make up over half of the visitors.

Studies show that recovery of the industry will be a slow process.

However, there is certain progress. For example, the number of Russian tourists, who constitute a considerable part of the entire tourism business in Turkey, increased by 95.6% after the resolution of the August 2016 diplomatic crisis between the two countries.

JAMnews correspondents spent a couple of April days in Istanbul and, among other things, decided to see its tourist and human components.

These days Istanbul featured a competition between the proponents and opponents of President Erdogan, who initiated the 16 April referendum, turning Turkey from a parliamentary into a presidential republic (see JAMnews’s report).

Politicians and experts across the globe are discussing how authoritarian Turkey has become now and how much its EU integration prospects have diminished (JAMnews provided detailed coverage on this issue).

But once the journalists stopped thinking about it from a political context, they immediately explored Istanbul.

Unlike Paris and a popular quote about it, one doesn’t want to die. On the contrary, one would wish to return and live in this friendly, charming and industrious city.

There are various different places in Istanbul. For example, on the one hand, at the same distance from Taksim Square, there is Istiklal street, the city’s commercial center, and on the other, a huge area along Tarlabaşı Boulevard, which can hardly be referred to as poor, but would rather be qualified as a ‘slum’.

You shouldn’t limit yourself to just tourist attractions. Slums are interesting as well, because when you are there you can imagine what Istanbul looked like some 50 years ago. 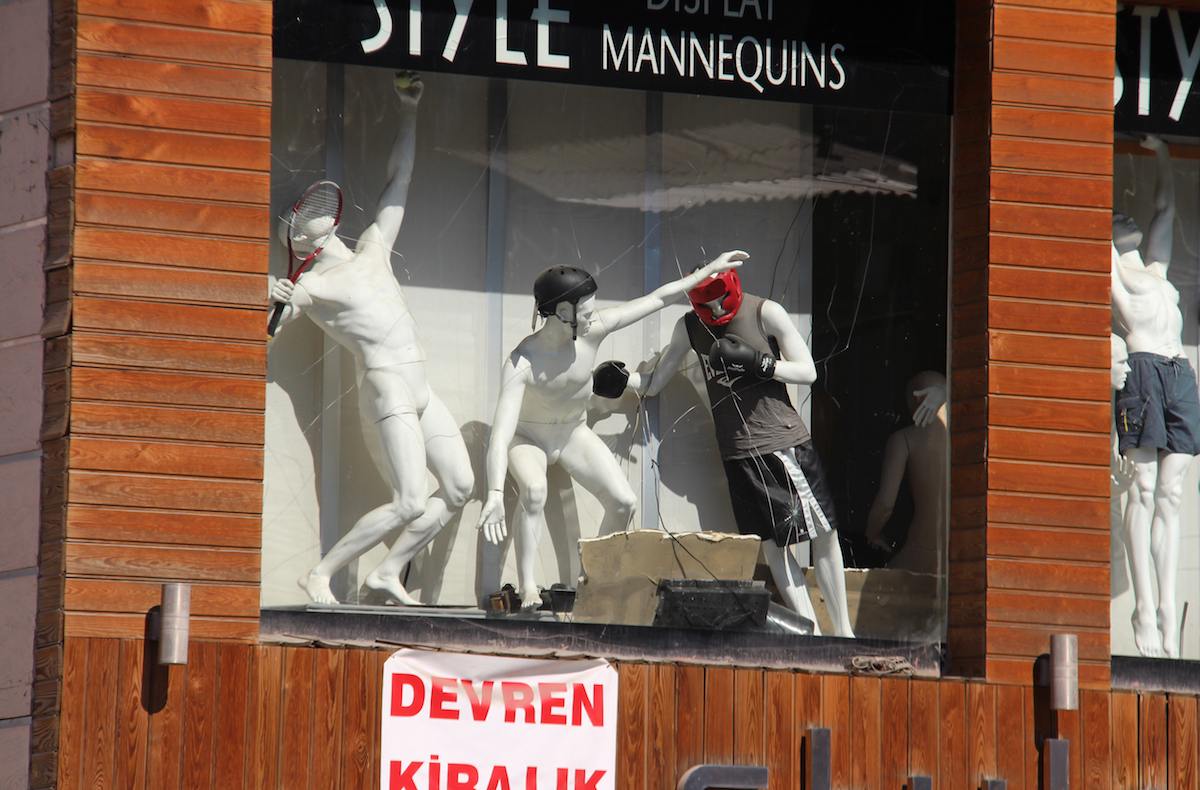 A salesman in Istiklal immediately identified us as foreigners. He said he preferred us as the buyers.

‘It’s interesting to bargain with foreigners. And that’s not because they are easier to be cheated. Bargaining with our people is just boring, it’s like attending a contractual football match: everybody knows what the end is going to be.’ 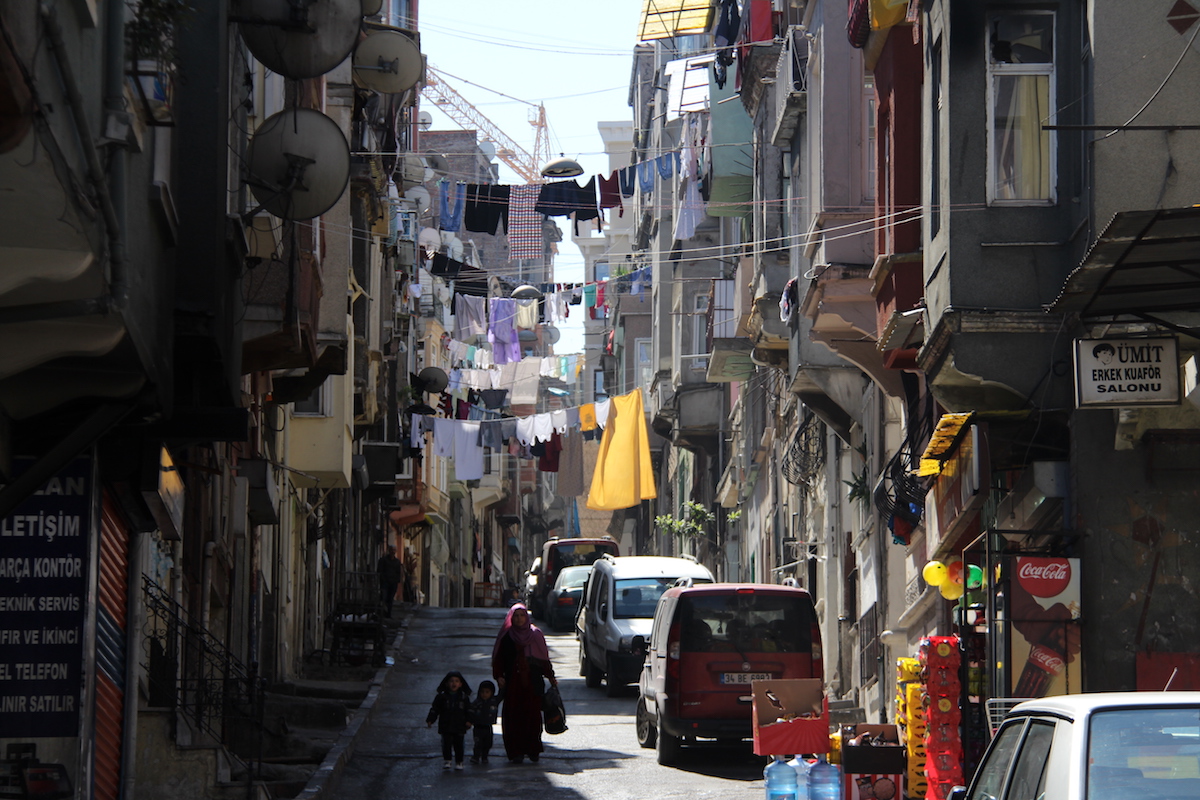 Yet, there is one distinct similarity between those two places (equally as with the rest of the neighborhoods in the Turkish capital). It lies in the sense of security.

There is no such feeling that you are in an area of extreme aggression or street crime. Well, at least in the daytime.

A major difference between them is probably that you stand a better chance to meet an English speaker in Istiklal. Although, when asked: “Do you speak English?”, any street vendor near Tarlabaşı will gladly say ‘Yes’, but there is a good chance that this conversation will boil down to just that.

Though it’s true that you will still get to your destination – after all your attempts to find your way has failed, you will still be guided to the right place. 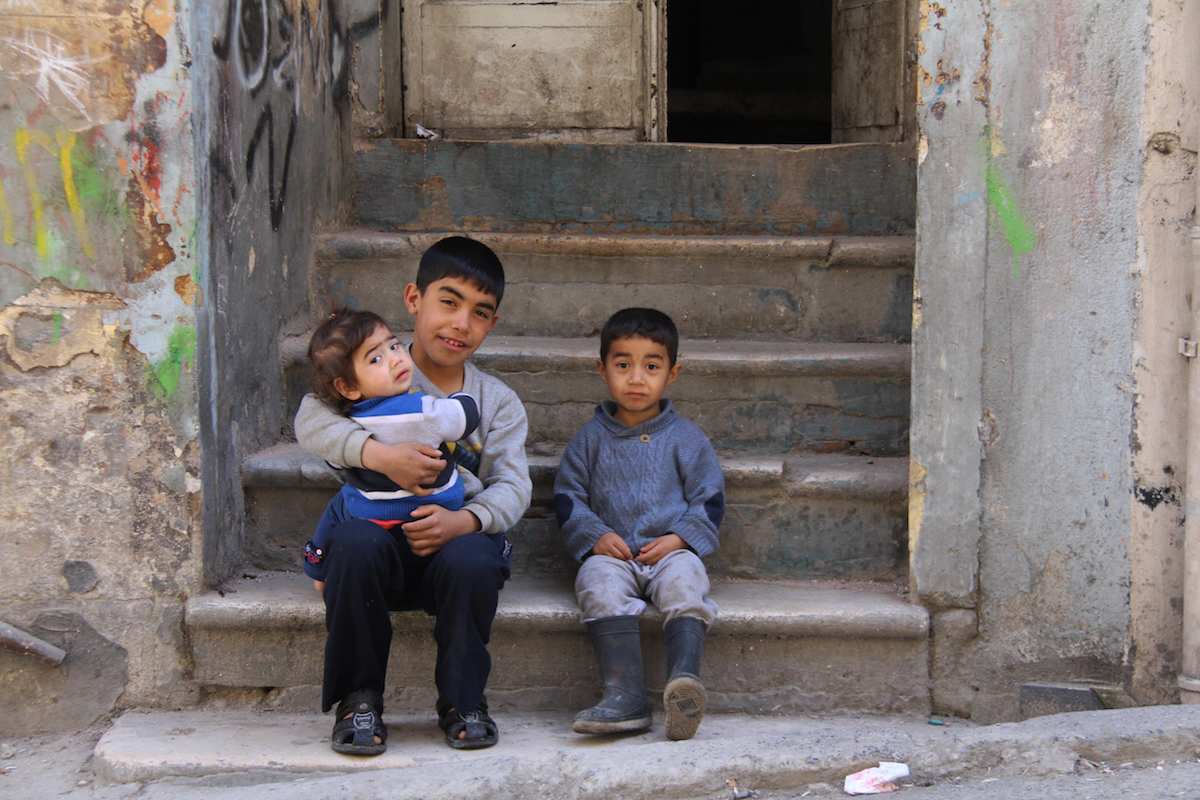 You may get a real wind-up in Istanbul if you let a local taxi driver know that you are in a hurry. In that case, a trip in this city of legendary traffic jams and steep descents may well cost you a couple of gray hairs.

Border hostilities, frequent terrorist attacks and political upheavals are taking their tolls. Not only do statistics indicate as such, but everyone in Istanbul, note with regret that tourism has recently declined, resulting in a drop in income of those engaged in this field.

Yılmaz Özlük, a businessman, told us about present-day life in Istanbul, as well as shared with us his unusual story of how he started up his business:

Is it because it’s neither Europe nor quite Asia? Or is it its amazing tolerance? Or perhaps some kind of light-heartedness?

Possibly all of these together.

Indeed, Istanbul isn’t the European capital neither is it the Asian one. It is a city, where a mixture of Ottoman Empire architecture, traces of Western influence and modernity isn’t perceived as eclecticism, but rather as something natural, like a succession of changes in geological strata.

That’s probably where the roots of its tolerance lie. Everyone here is quite comfortable with Orthodox churches, Catholic cathedrals and Mosques neighboring each other, equally as with a combination of hijabs and niqabs and daring mini-skirts.

It should be noted that niqabs are more often worn by visitors: there has been a noticeable increase in the number of tourists in Istanbul from Arab countries over the past few years. 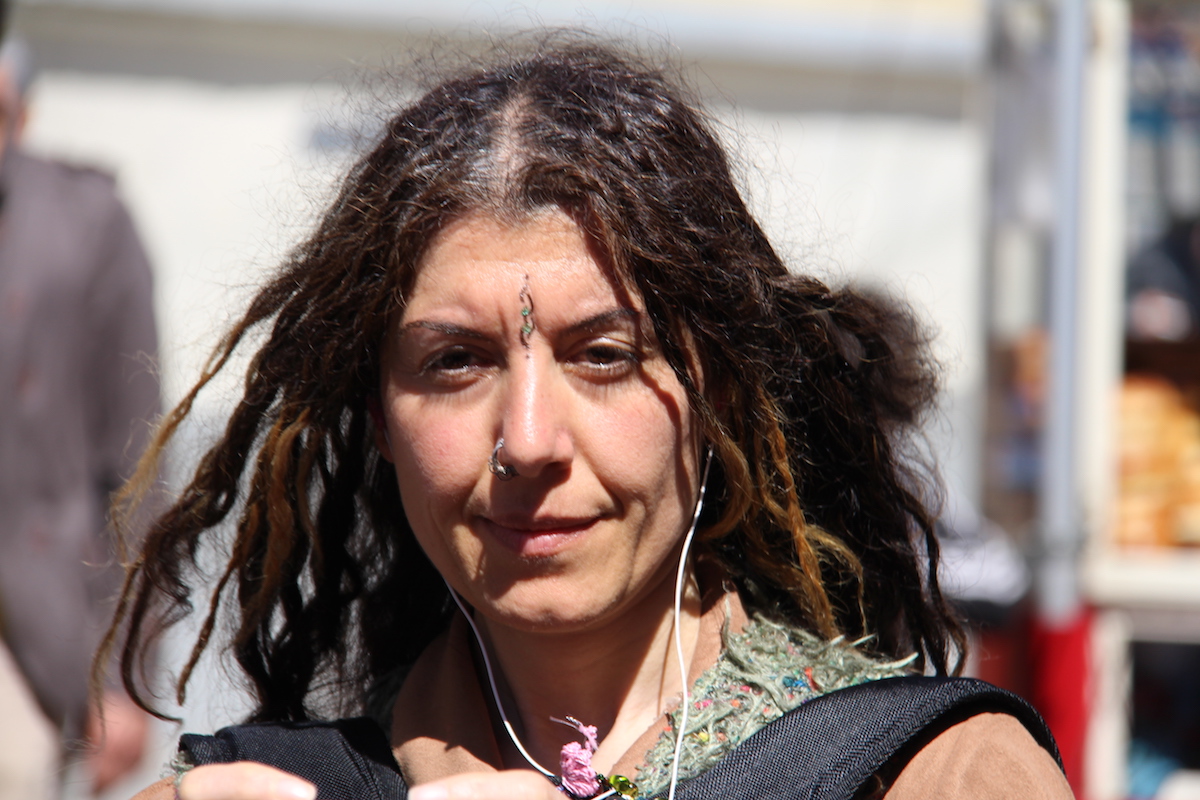 Istanbul is light-hearted in the best sense of the word. Its residents are smiling and amiable, not just when it comes to their business or because they wish to lure visitors.

It’s probably hard to be focused and gloomy when you are surrounded by such beauty, when you live in such a wonderful climate and in such close proximity to the sea. 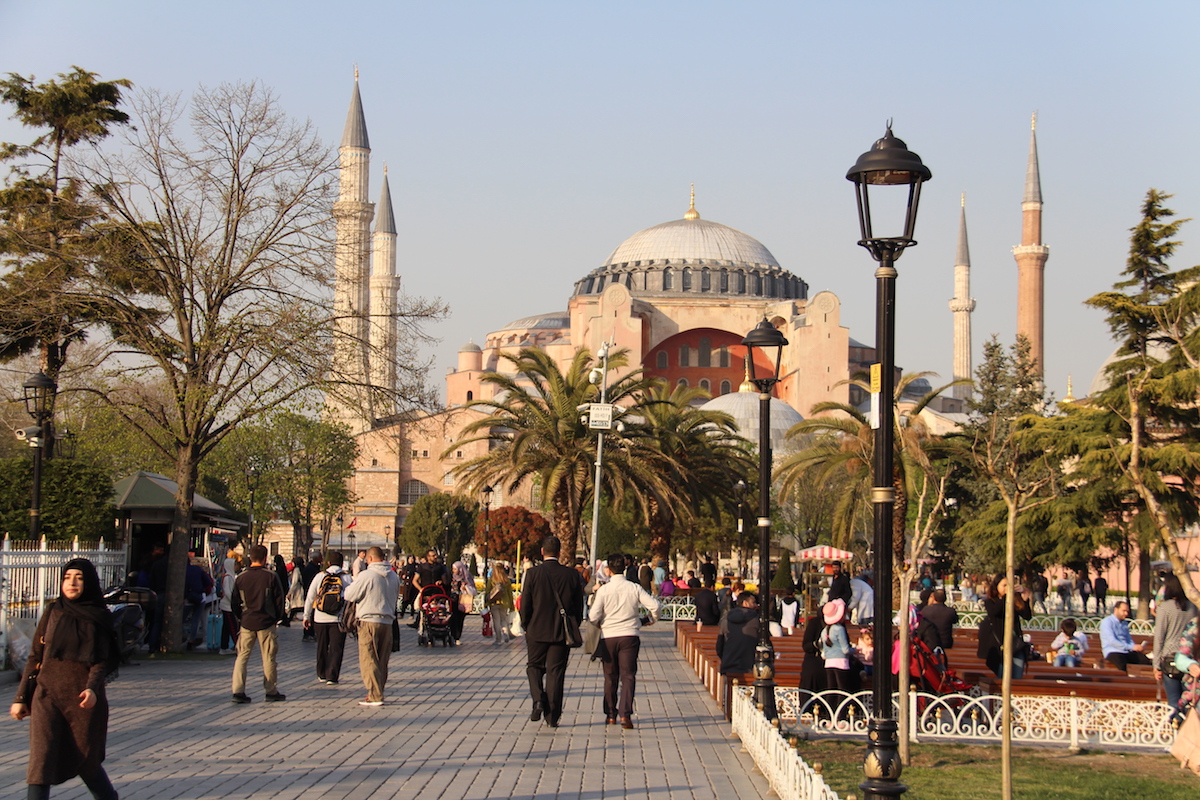 We talked to Mehmet, a tour guide, while he was waiting for his group in the Istanbul tourist epicenter.

“The tourist influx has changed a lot. The number of Arab visitors has noticeably increased. Of course, they are like many other tourists, but there is one problem with the Arab tourists – they can’t be put into a tour group with anyone else. They can’t stay for more than five minutes in one place. They take selfies for five minutes and then move on,” Mehmet analyzed the market.

It’s hard to find an idler in Istanbul. Everyone is busy, providing different services to each other. They trade, carry, serve food, receive in hotels, and conduct sightseeing tours.

At first, it seemed that idle Istanbulers could be found on the bridge across the Bosporus Strait. Dozens of people (both, men and women) are standing with spinners at a 30-meter distance from the water.

But nothing of the kind! They aren’t having fun, but are rather engaged in serious business: the whole catch goes straight to innumerable coastal restaurants, where you will eat it and ask for more.

In any Istanbul tourist store you will be charged a price that will certainly be about four times higher than the actual one.

But that’s also a bargaining performance, which tourists are invited to participate in: holding up hands to heaven, complaints about the global economic crisis and even demonstration of photos of numerous children (who don’t always look alike), who need to be provided for somehow.

Hagia Sophia (Turk. Ayasofya), the Blue Mosque, the Bosphorus Strait sightseeing cruise – all are of course ‘must see’ places in Istanbul.

But you will get the greatest pleasure from this city if you do something else. Just leave the hotel (any time of the day, Istanbul never sleeps) and go wherever your eyes lead you. Here, they will always lead you to the right place.

Op-ed: How is Russia benefiting from Armenian- Azerbaijani confrontation?