Special forces in Tbilisi dispersed demonstrators earlier this morning towards 5 a.m. on November 26. Protesters had blocked the entrances to the parliament building.

The police used water cannon to disperse the protesters, despite the freezing temperature.

According to official information from the Ministry of Internal Affairs, three people were injured, 28 protesters were detained.

According to the newspaper Batumelebi, one of the protesters, Zaza Lipartia, was injured in the eye as a result of the use of water cannon.

According to doctors, Lipartia was examined and his life is not in danger, but surgery is needed. Several bones around his eye were broken.

According to eyewitnesses, the jet of a water cannon hit Zaza Lipartia in the face and “his eye fell out, he put it back in.”

The Ministry of Internal Affairs commented in a statement:

“Participants in the rally did not free up the entrances to the building of the legislative body they occupied in the time allotted them by law enforces. Accordingly, their actions went beyond freedom of assembly and freedom of expression within the legal system. In particular, the law on assemblies and demonstrations was violated, which prohibits blocking the entries of the legislative body, as well as the carriageway, if this is not necessary due to the number of participants.“

Protests in Tbilisi and several other cities of Georgia began on November 14, when parliament did not pass an electoral reform bill. This project was fundamentally important – the opposition’s protests in June 2019 were stopped to a large extent precisely because the leader of the ruling Georgian Dream party Bidzina Ivanishvili yielded to the opposition’s demands and personally promised to abandon the majoritarian system and adopt a proportional (party) parliamentary election system with a zero per cent entry threshold.

For the adoption of the draft electoral reform, 113 MPs out of 150 needed to vote in favour. However, only 101 deputies supported the changes on November 14. Mostly, the majoritarian MPs from the ruling party abstained.

On the same day, the opposition and civic activists announced the beginning of protests, camped on Rustaveli Avenue and refused to leave until their demand was satisfied.

After the dispersal of the rally on November 18, opponents of the government resorted to “partisan” tactics – they hung huge chains with locks on the gates of buildings of state institutions, booed ministers and MPs who came to work.

The main demand of the protesters remains valid – early parliamentary elections on a fully proportional system.

As a compromise option, they offered the authorities the so-called “German model”, which would entail a mixed system, but the representation of parties in parliament according to the votes they received.

However, the authorities rejected this offer. On November 25, the parliamentary majority gathered again at the office of the Georgian Dream. After the meeting, the party’s general secretary, KakhA Kaladze, said that “the topic is closed” and that in 2020 the elections will be held according to the current mixed system.

However, this morning, people began to gather again in front of the Georgian parliament.

The plenary session of parliament is scheduled for 12:00. The opposition says it will continue to picket the parliament building, despite the dispersal, and will prevent deputies from entering the building.

Police and special forces were mobilized near the parliament. They do not allow protesters to approach the building – traffic is blocked on adjacent streets by police buses.

Journalists wishing to enter parliament are allowed into these streets only by accreditation.

According to the protesters, today they will try to picket the parliament and prevent the plenary meeting.

“The whole political process takes to the streets”

Civil activists and opposition leaders who spent the night in front of parliament, despite the dispersal of the rally, are not going to abandon their plans,.

According to Nika Melia, one of the leaders of the United National Movement, the opposition will be uncompromising in its demands:

“We demand the right to free elections proportional to the elections that Ivanishvili promised to the people and then stole them. Today Ivanishvili is a weak person who physically deals with his people and does not enter into dialogue with him. When people are rightly angry, they will be angry until their demands are met. The whole political process takes to the streets, and the whole society stands on the streets, no one stands on the side of Ivanishvili – only “robocops” (special forces),” Said Melia.

According to Gigi Ugulava, one of the leaders of the European Georgia party, “Ivanishvili will end soon.”

“He will not be able to maintain his power with the help of special forces. Violence and dictatorship are taking shape in the country. Ivanishvili will not stand this battle. Today they are scared chasing wood and brushwood. They are already demoralized,”said Ugulava.

The night before parliament

A large rally in front of the parliament began on November 25 at 19:00. The main slogan of the rally was “Together against one!” Protesters blocked the entrances to the parliament building in the evening.

• Photoreport from the rally on November 25

The demand of the protesters remains unchanged – to call early parliamentary elections in a fully proportional system.

After the main part of the rally, several hundred people remained at the parliament building, mostly young people.

The rallies included music, the demonstrators danced to keep themselves warm at least a bit. At night in Tbilisi it was minus one degree Celsius.

An improvised cinema was also arranged, where Schindler’s List was shown on the big screen: 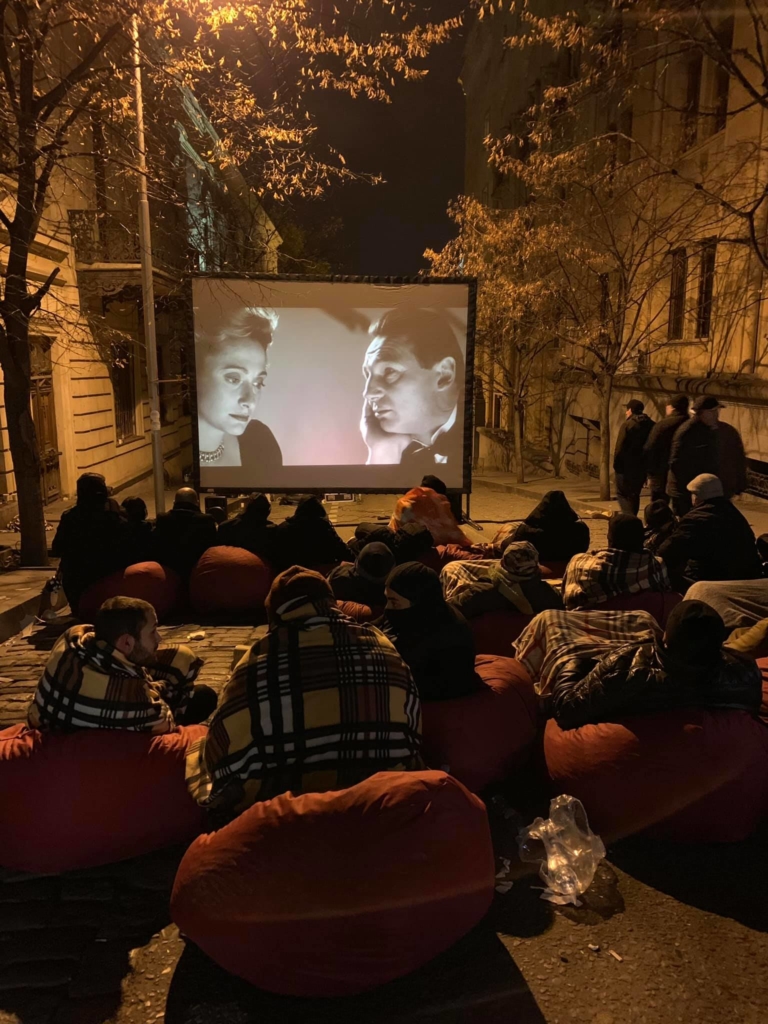 Police forbade protesters to bring firewood and other items necessary for heating.

Before the crackdown, the demonstrators were warned in advance that if they did not clear the way to the parliament building, they would use force against them.

By 5:30 in the morning, special forces in masks and helmets dispersed the demonstrators, put down their tents or tents, and completely took control of the entrances to the building.

Immediately after the appearance of special forces, the organizers turned to the protesters – at five in the morning the voice of Shota Digmelashvili, the leader of the public organization “Shame”, called on the demonstrators to calm:

“Do not resist, we are conducting a non-violent, peaceful demonstration,” Digmelashvili addressed the protesters.