The incumbent President of South Ossetia, Leonid Tibilov, should be deregistered as a presidential candidate in the upcoming Aprilelection – Eduard Kokoity, aprominent South Ossetian politician, stated when addressingh is supporters in Tskhinval. 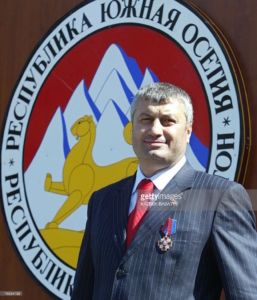 Ex-President of South Ossetia, Eduard Kokoity himself was denied registration a few days ago, after the major part of his active election campaign had passed.

“The Incumbent President, Leonid Tibilov, should be disqualified from the presidential race by theCEC. There are evidence that both, the incumbent President and the CEC, violated the law. ThePresident concealedanddidn’tindicate in his declaration that he owned a vehicle, whereas the CEC allowed him to stand for elections. These are the grounds for his disqualification from the presidential race,” Regnum news agency quoted Kokoity as saying.

Kokoity presented to journaliststheevidencethattheincumbentPresident, Leonid Tibilov, owned undeclared ChevroletNivavehicle. The journalists, who attended the meeting, were also shown the documents on non-payment of transport tax and other fees.

hat’sexactly howEduard Kokoity himself was deprived a right to run forpresident’spostonApril 9. He failed to indicate in his declaration his wife’s owned vehicle, though Kokoity himself denied those allegations, claiming the aforesaid vehicle hadn’t been in his family’s possession since August 2016. According to theCEC, SouthOssetia’sex-presidentfailedtomeet the residency qualification requirement, under which a candidate should have lived in the territory of the republic for the past 5 years.

Eduard Kokoity claimed, he was the only person so far in whose regard the ownership right-related inquiries had been made to the Russian Federation. So, now he is going to seek justice through court, strictly within the legal framework.

Presidential elections in South Ossetia are scheduled for April 9.

According to the Caucasian Knot media outlet, 3 presidential candidates have been registered by the South Ossetian CEC so far:

MPAlanKozonov is awaiting for the Central Election Commission’s decision. South Ossetia’s ex-President, Eduard Kokoity, has been denied registration. On a side note, 14 out of 15 CEC members backed this decision.

Who is looking forward to Kokoity’s return in South Ossetia? Apparently the proponents of independence. Who don’t expect Kokoity’s return? That’s a more complex issue-find a story about Eduard Kokoity and a phenomenon of his current return to politics on JAMnews.