Residents of South Ossetia are outraged over new Russian customs rules, which have made demands on automobiles entering the Russian Federation stricter and which have increased taxes and excise payments.

Due to the Georgian-Ossetian conflict, especially after the August War of 2008, the Ossetian authorities completely blocked the route leading to Georgia.

The only way to leave South Ossetia is through the road to Vladikavkaz, to North Ossetia.

On September 16-18, hundreds of drivers with South Ossetian license numbers held an unauthorised rally outside the Russian customs building in Vladikavkaz.

However, the Russian authorities refused to change the new regulations. The only thing that was offered to protesters was to collect signatures under an appeal to the President of South Ossetia Anatoly Bibilov with a request to conduct negotiations in Moscow on customs issues.

What is the problem?

The vast majority of residents of South Ossetia have both South Ossetian and Russian citizenship.  And this is precisely what has created the problems for car owners.

According to allied treaties with Russia, citizens of South Ossetia can stay in Russia indefinitely and freely cross the border. However, now these rules do not apply to car owners who have been issued customs clearance documents in South Ossetia and at the same time have Russian citizenship.

Now, the laws of the Eurasian Customs Union have been applied to this population as well, which has much more serious requirements and larger payments.

What are the new rules?

Starting in mid-September, owners of vehicles with South Ossetian license plates must be in South Ossetia for at least 20 days during the calendar year.

As if things weren’t confusing enough: another regulation states that the vehicles themselves must be located in the place they were registered in for at least 180 days.

Otherwise, the owner of the car must make a substantial cash deposit when crossing the border.

Residents of South Ossetia were not informed about the new rules, and only those arriving at the Nizhny Zaramag checkpoint was confronted with this issue.

As a result, people were forced to leave their vehicles in parking lots and continue on by taxi.

On September 15, a group of indignant activists arrived at the Nizhny Zaramag checkpoint and tried on the spot to speak with representatives of the customs service, and accused the customs service of being late to report the new regulations.

On September 16, people began to gather at the building of the Russian customs office in Vladikavkaz. About 200 people waited more than two hours for the official representatives of this department to come to them.

However, instead, the police began to persuade everyone to disperse and accused them of participating in an unauthorized rally.

An angry crowd rushed into the courtyard of the department and entered the lobby of the building, where they were blocked by guards.

After some time, the acting head of the North Ossetian customs Marat Kebekov finally came to the protesters. 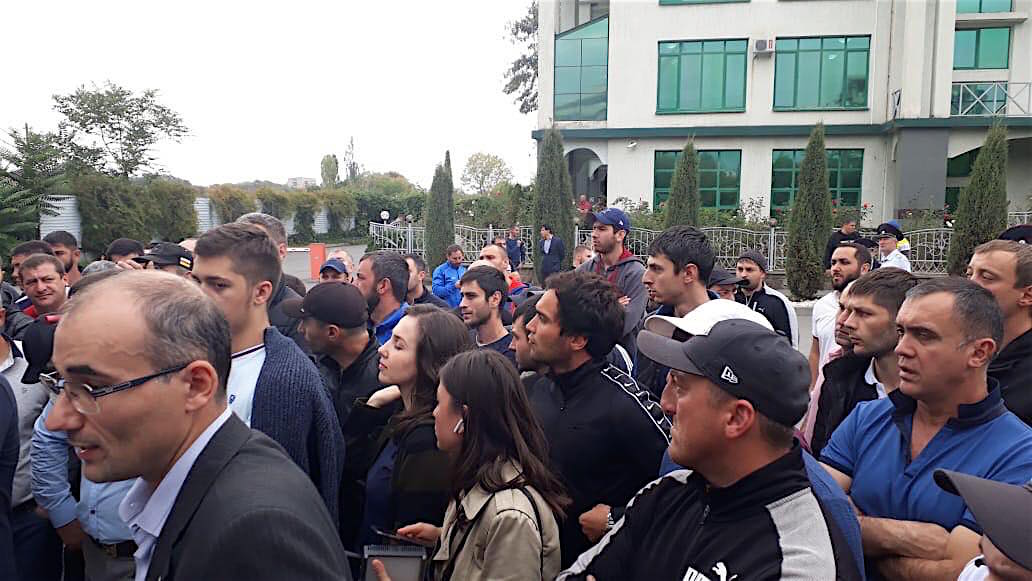 At first, the parties agreed that the customs of North Ossetia would try to resolve the issue through the head office in Moscow and cancel the requirement for South Ossetian car owners to stay in South Ossetia for 20 days during each calendar year.

It was said that such an agreement could be reached within 24 hours.

However, this proved to be impossible.

Residents of South Ossetia were invited to ask their president to solve the issue. Thus, many of the issues of car owners have remained unanswered.

Protesters were clearly disappointed by the negotiations, and many of them refused to leave the territory of the customs department, despite the insistent demands of the police.

Activists have begun collecting signatures under an appeal to the president of South Ossetia and plan to send a request in the near future.