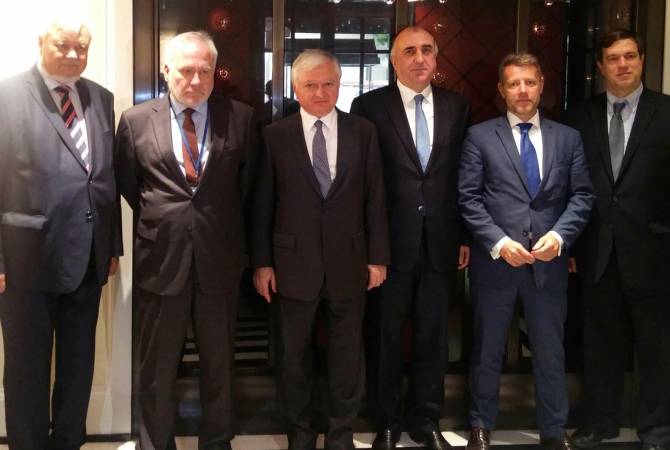 “Azerbaijan’s Minister of Foreign Affairs Elmar Mammadyarov, at a meeting with his Armenian counterpart Edward Nalbandian and co-chairs of the OSCE Minsk Group, expressed support for some of the co-chairs’ proposals regarding a Karabakh settlement,” the Russian RIA-News agency wrote in reference to the press secretary of Azerbaijan’s Ministry of Foreign Affairs, Hikmet Hajiyev.

Hajiyev did not specify which proposals were officially approved by Baku.

A meeting between the Armenian and Azerbaijani Foreign Ministers took place in New York on 23 September while both diplomats were participating in the 72nd session of the UN General Assembly.

The co-chairs of the Minsk Group first spoke with Edward Nalbandian and Elmar Mammadyarov separately, and then held joint discussions.

A statement by the co-chairs said:

“The main goal of the meeting is to discuss the current situation in the conflict zone, to find a way to intensify the negotiation process, and plan a meeting between the presidents of Armenia and Azerbaijan. The co-chairs expect that this meeting will lead to increased trust between both parties, and that they will show a political resolve to find a compromise on key issues.”

Representatives of the Armenian Ministry of Foreign Affairs have not commented on this meeting yet.

Go to top
The presidents of Armenia and Azerbaijan, Serzh Sargsyan and Ilham Aliyev, have not met again since the talks held with Russian President Vladimir Putin in Saint Petersburg on 20 June 2017.