Presidential elections in Georgia: Why is the ruling party talking about civil war?

For the first time in history, Georgia failed to elect a president in the first round of elections which took place on 28 October. The second round will be held before 2 December, though the exact date has not yet been announced.

There is much suspense. The votes of the opponents were almost equally divided in the first round – independent but government-supported candidate Salome Zourabichvili received 38.64 per cent of the votes, while opposition candidate Grigol Vashadze received 37.73 per cent.

The new constitution has turned the presidency into a nominal figure who does not play a powerful role in the government of the country. However, the presidential elections are a rehearsal for the parliamentary elections to be held in the country in two years’ time.

The main question is who will be able to consolidate more votes this month – the ruling party or the opposition?

The authorities have already identified a new electoral strategy for themselves – something close to intimidating the population – and say that civil war, chaos and a depreciation in the national currency, the lari, threaten the country if voters elect the opposition candidate.

Salome Zourabichvili, 66, is an independent candidate supported by the government and the personal choice of former prime minister Bidzina Ivanishvili. She made it into the second round along with opposition candidate Grigol Vashadze, who is a member of ex president Mikheil Saakashvili’s United National Movement party. 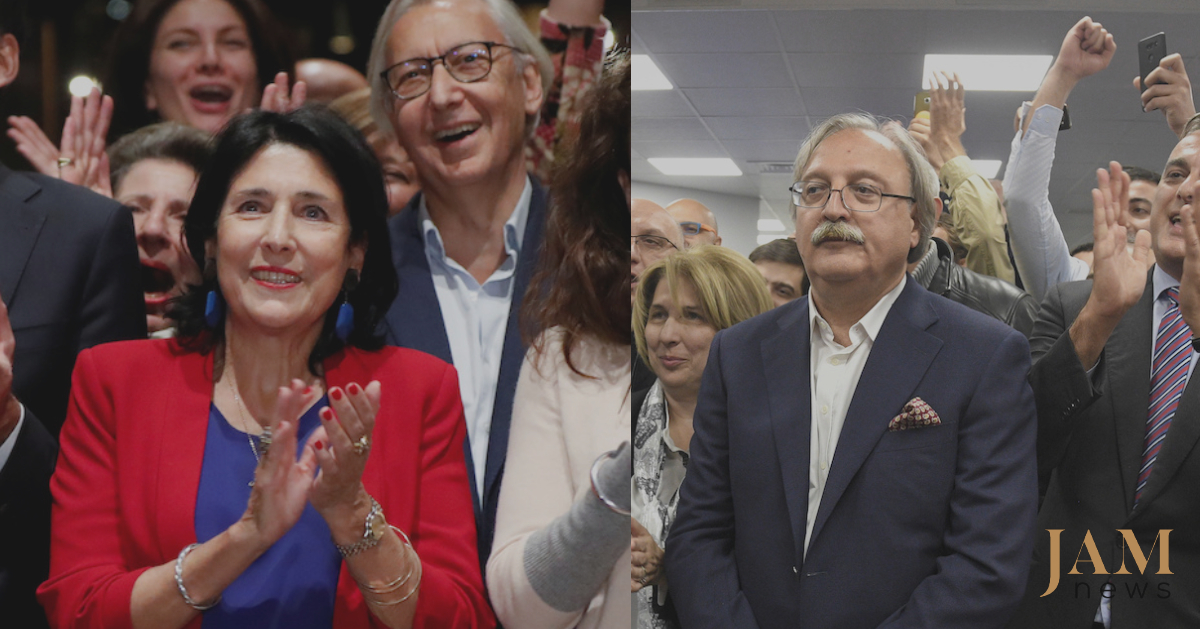 Both were former foreign ministers under Saakashvili, and both candidates received an almost equal number of votes in the first round.

The second largest opposition party, European Georgia which consists of former members of the United National Movement, won almost 11 per cent of the vote and has called on its supporters to vote for Vashadze in the second round.

If one takes into consideration the fact that the other opposition candidates will possibly support Vashadze, then the ruling party which lost in all major cities, can be said to have suffered a crushing defeat.

• Lessons of the Georgian presidential elections

• Georgia to return to the polls – presidential candidates neck and neck

•  Salome Zourabichvili – the first serious failure of the ruling party

The situation within the ruling party is critical. It clearly did not prepare for such a scenario and was confident of victory in the first round. After the closure of polling stations, Zourabichvili’s campaign headquarters were already celebrating victory. The mood changed dramatically when the first data came from the Central Election Commission. Zourabichvili and co were so unprepared for such a development that for three days after the election, Zourabichvili literally hid from journalists and did not comment on the election results. There were even rumors that she was going to concede.

However, this did not happen. Zourabichvili announced on the third day at a press conference that she would go into the second round.

The strategy of the ruling party

The authorities hope that when the population sees the “real threat” of the return of Saakashvili and his authorities, they will mobilise, come to the polls and vote for Zourabichvili.

In order for this strategy to work, they began to intimidate the population with images of revolution, destabilisation and chaos, which, in their words, would be inevitable in the event of a victory for the opposition.

“If Vashadze wins the elections, this will be a step towards the start of civil war in Georgia,” Georgian Dream MP Gedevan Popkhadze said.

The authorities also pointed out that former president Mikheil Saakashvili may also be pardoned and return to the country.

Justice Minister Tea Tsulukiani says Vashadze is not fighting for the presidency, but for the right to pardon Saakashvili.

Some MPs have suggested that should Vashadze win, he will also give amnesty to former officials convicted of violence and abuse of authority, which concerns former interior minister Vano Merabishvili and the former head of defence, Bacho Akhalaia.

“All this will then be aimed at eliminating political opponents who are a problem for Saakashvili,” said MP Popkhadze, who called for unity in order not to allow this “fascist force” to return to power.

A similar statement was made by member of the justice council, Anna Dolidze. She also predicted that if Vashadze comes to power, the dollar will reach 6.70 lari. The current exchange rate is 2.7 lari to the dollar, while in 2012 it was 1.67 to the dollar.

Irakli Sesiashvili, another Georgian Dream MP and Chairman of the Parliamentary Committee on Defence and Security, expressed his willingness to fight physically, become the “first soldier” and defend the country “from these traitors, torturers and misogynists”.

“On one side there is an unfulfilled desire for violence, and on the other side – it may be not quite the ideal power – but peace, security and development of the country. In this situation, I am confident that we will win,” Sesiashvili said.

Parliamentary majority member Gia Volsky says that many Georgian Dream supporters did not come to the polls on 28 October as they felt that Zourabichvili would win anyway.

“But now, when they see that the return of Saakashvili is real, they will mobilise, come to the polls and victory will be ours,” he said.

The same rhetoric can be heard from pro-government experts as well as members of the public and pop singers who participate in various political talk shows, urging people to consolidate around Zourabichvili’s candidacy.

Along with the authorities, the Imedi television company has also gone into “emergency mode”. Imedi is owned by the family of deceased Georgian oligarch Badri Patarkatsishvili, and is at present the main propaganda machine of the authorities.

Another pro-government media outlet, Post TV, has posted a video on its Facebook page in which employees of an alcoholic beverage factory make a statement with severe and austere expressions on their face. They also say that they are shutting down the factory and will go canvas for Zourabichvili before the second round of voting is held in order “to save their homeland and prevent the return of the bloody regime of Saakashvili”.

Also being used against Vashadze is the fact his election campaign was run by Vitaly Shkliarov, a Belorussian-born political consultant who has at different times worked on the presidential bids of Barack Obama, Bernie Sanders, and campaigned for one of the candidates in Russia’s latest presidential election, Ksenia Sobchak.

As it prepares for the runoff, the ruling party has built its campaign around a claim that Vashadze, who is a Lomonosov Moscow State University alumnus and used to work in the USSR foreign ministry, is a pro-Russian politician with links to the FSB.

“I am not going to give my country away to Russia,” Salome Zurabishvili said. Interestingly, she has been accused of pro-Russian rhetoric herself in the past, mostly because of her remarks that it was Georgia that started the war over South Ossetia in August of 2008.

Opposition channel Rustavi-2 is also in full swing in the election campaign.

The main task of Vashadze and his election headquarters is to mobilise as many opposition votes as possible. They do this by reminding the population of a “dire economic situation” in the country, that everything in the country has become centralised and is in the hands of the country’s informal leader, former prime minister Bidzina Ivanishvili.

• Head of Georgia tells all before elections

Even though many do not like the UNM, they are going to vote for the opposition in the second round:

“In ordinary elections I would never vote for the UNM, but this is an unusual situation. The authorities completely stopped listening to the people. Ivanishvili even thinks that everything is fine in the country and only Rustavi-2 is exaggerating the severity of the situation. We need to somehow reach out to them and tell them that no, things are bad, and that Ivanishvili is not a king here who can do whatever he wants,” says 63-year-old Marina, a pensioner.

Saakashvili on the line

Ex-President Saakashvili is now in The Netherlands – his wife’s home country. However, his presence there is only physical.

Saakashvili is actively involved in the election campaign – he makes several live streams via Facebook a day, appeals to voters and encourages them to go out and help secure a victory in the second round.

He can also be systematically seen on Rustavi-2, the main opposition channel in the country, which, like Imedi, is also actively involved in the election campaign, only in favor of the opposition.

Here, for example, is a video in which Saakashvili enthusiastically reads the results of the Central Election Commission on the night of the election from individual polling stations where the opposition candidate was leading:

However, not everyone is enthusiastic about such activities by Saakashvili.

He has many critics, even among the opposition’s supporters, who believe that Saakashvili is yesterday’s Georgia and his activity only prevents the opposition from consolidating supporters.

“The people said they want to move forward”

Giorgi Rukhadze, director of the Centre for Strategic Analysis of Georgia, said that he noted that a political talk show on Imedi TV channel used the phrase “civil war” more than 25 times.

“They are simply intimidating and blackmailing voters. Even if it is hypothetically possible that there is a threat of destabilization, then the fault is not that of the opposition but the authorities who are responsible for order in the country. This is the election campaign of the authorities – that’s how terrible it will be if we lose,” says Rukhadze.

He says the fact that society in Georgia is extremely polarised can be noticed by alternately switching between Imedi to Rustavi-2. However, there is no threat of civil war in the event of the opposition candidate winning.

“How is it possible for the authorities to make such statements? After all, if something happens in the country, it will first and foremost be the fault of the authorities,” he said.

“This is the hysterical reaction of the Georgian Dream to defeat in the elections,” says the chairman of the opposition Republican Party, Khatuna Samnidze.

“Instead of analysing the election results and trying to understand why voters did not vote for their candidate, they switched to blackmail and intimidation of their own population.”

Samnidze says people in Georgia are not at all inclined to destabilisation and revolution. On the contrary, she believes, the Georgian voter has become wiser over the years: