Armenian parliament fails to elect PM in bid to dissolve 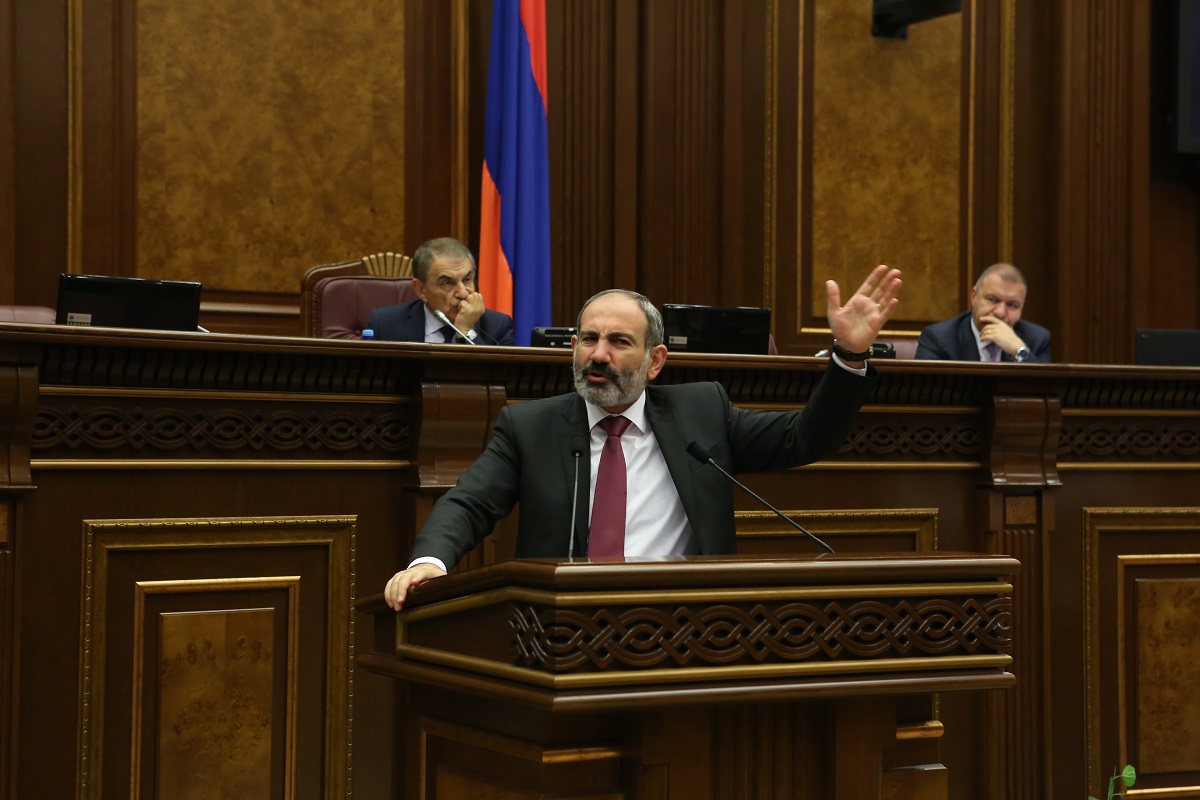 The National Assembly of Armenia voted not to elect a prime minister on 24 October as a first step towards the dissolution of the parliament.

One vote was cast for electing the leader of the Velvet Revolution, Nikol Pashinyan, while 11 other MPs abstained.

The process was more a formality, and Pashinyan reminded MPs that an agreement had been reached between the government and the former ruling party in that a new prime minister should not be elected.

Pashinyan, who resigned from the post of Prime Minister of Armenia on 16 October, is now acting prime minister.

According to the constitution, if the parliament does not elect a prime minister twice, the parliament must self-dissolve, and early elections should be scheduled.

Another vote will be held next week. The parliamentary forces appear to have reached an agreement on the issue and no surprises are in store. The parliament will proceed to self-dissolve.

Why does the country need snap parliamentary elections?

The political force that came to power after the velvet revolution under the leadership of Nikol Pashinyan does not have a majority in parliament.

The current composition of parliament is made up of deputies from the former government and their supporters, who have the power to resist and create obstacles for the current government’s platform.

Having the support of a significant part of the country’s inhabitants, the “revolutionary” government considers it necessary to urgently hold early elections and secure a majority in the National Assembly.

Attempts to ‘sabotage’ the government

“The parliament has been sabotaging the work of the government since the day it was formed,” said Pashinyan on 22 October when the parliament failed to adopt amendments to the country’s electoral code. It was not possible to hold a quorum given that only 57 MPs appeared at the session, while 63 are needed for a parliamentary session to be held. A package of amendments was prepared by the government.

However, Pashinyan and his supporters say that attempts to foil the government’s efforts at reform are in vein as elections will be held in December of this year regardless.

On Monday, 28 October, the parliament will again meet to vote on amendments to the electoral code. If the vote fails again, elections will be held in accordance with the current code.

What does the government propose to change in the electoral code?

Artak Zeynalyan, acting Minister of Justice of Armenia, says that the reform of the Electoral Code would:

Read also: What the Armenian government offers to change in the electoral code ahead of the snap parliamentary elections

Why did parliament refuse to pass the amendments?

Changes to the electoral code are aimed at ensuring a balance in the future parliament.

The constitution demands that the party that wins a majority in parliament cannot receive more than two-thirds of the body’s mandates: the opposition must receive at least one third of the spots.

Few people doubt that the Nikol Pashinyan’s Civil Contract will receive 67 per cent of the votes. The question is how the remaining 33 per cent will be divided.

Analysts say that the government-initiated amendments also seek to prevent the concentration of opposition potential in the hands of one party as well.

The Armenian media wrote that the former ruling party and its supporters was hampered by the fact that the new electoral code would dispose of territorial lists and the rating system, thanks to which a significant number of MPs made their way into this convocation of parliament. This system was considered a channel for oligarchs to enter the parliament.

Meanwhile, the Venice Commission, having approved the amendments as a whole, recommended to ensure their entry into force within one year, and not now.

A force majeure and the expected ending

Events in Armenia have been developing rapidly in recent months. Parliamentary elections may be the end of the constitutional crisis and the start of a new stage in the political life of the country.

Early parliamentary elections will be held in Armenia on either 9 or 10 December, after which Pashinyan’s Civil Contract party hopes to achieve a parliamentary majority.

Pashinyan says that without a majority in parliament, the power of the people is incomplete.

He urged people to continue supporting the new government so that the revolution would reach its logical conclusion. He explained that the uncertainty of the political situation also hinders investment and economic development of the country.

Is a “palace coup” possible in Armenia?

The parties that make up the parliamentary majority — the Republican Party, the Prosperous Armenia Party and Dashnaktsutyun — resisted Pashinyan’s intention to announce elections in December of this year, and insisted on May 2019 as the date for early elections.

On 2 October these parties convened an emergency meeting of the parliament and voted for amendments to the regulations, through which it would be possible to torpedo the dissolution of parliament.

On the same day Pashinyan again convened his supporters, and about 50 thousand people convened around the parliament. Pashinyan signed decrees on the dismissal of ministers and governors from the Prosperous Armenia and Dashnaktsutyun parties right on the street at night.

Over the following days, all three parliamentary parties stated that they agreed to hold elections in December and would not nominate candidates for prime ministers.

The state of the political arena in Armenia is still unclear.

Pashinyan’s Civil Contract party is still in a formative stage.

Although the media writes about the party’s increasing numbers, it has still not been confirmed. Moreover, the party has yet to put forward a strong party platform other than its calls for reform.

As for existing parliamentary forces, the Republican Party, which ruled for 15 years, has found itself on the verge of complete disintegration. Deputies are leaving one after the other. However, there is a high probability that the party will still go to the polls.

The Prosperous Armenia party of the oligarch Gagik Tsarukyan suffered a crushing defeat at the end of September in the elections for the Council of Elders of Yerevan – that is, the city parliament.

Then, joining the attempt at a counter-revolution, it lost its ministers in the new government. Now the party is trying to recover from these blows. Gagik Tsarukyan has been forced to bow to Nikol Pashinyan and sign a memorandum of support for the “revolutionary” government.

As for Dashnaktsutyun, one of Armenia’s traditional parties, it has not seen such upheavals in its 130-year history. Although it has announced its participation in the elections, it is likely to be a complete fiasco for the party.

Robert Kocharyan not given space to maneuver

In August of this year, Robert Kocharyan was arrested and charged with overthrowing the constitutional order on 1 March 2008, when 10 people lost their lives due to police dispersing a rally held in protest of the February 2008 presidential elections.

Kocharyan’s arrest lasted about a week. Then the court released him, citing his immunity as a former president which is protected by the constitution.

Robert Kocharyan stated that he has returned to politics and will take part in the upcoming parliamentary elections, mobilizing supporters around him. However, from September to October, the investigating authorities arrested businessman Samvel Mayrapetyan, who is considered to be one of Robert Kocharian’s trustees. Then the case was resumed against his other confidant – the former head of the Armenian Customs Service, Armen Avetisyan. There was conjecture that Kocharyan would be exposed as a corrupt official.

After that, Robert Kocharyan said in an interview with Bloomberg that he did not intend to participate in the early parliamentary elections in December nor does he seek to assume the post of prime minister of the republic.

Experts say that Pashinyan’s Yelk bloc, in addition to the Enlightened Armenia Party, will make it into parliament, as might members of the former ruling Republican Party of Armenia and the Prosperous Armenia party of oligarch Tsarukyan.

It is also possible that the radical Sasna Tsrer Party will enter parliament.

In July 2016, members of the Sasna Tsrer Party captured a regiment of the patrol and inspection service of the police in Yerevan and held it hostage for two weeks. Their demand was the resignation of then-President Serzh Sargsyan. The people then took to the streets in support of Sasna Tsrer, but there was no change of government. Party members then voluntarily surrendered in order, as they said, to avoid bloodshed.

Read also: What happened in Armenia in 2016? Crisis after crisis

They were behind bars for two years, and were released only after the Velvet Revolution in Armenia – which was able to achieve what they could not: the overthrow of the previous government.