LGBT Pride Week will be held in Tbilisi from 18-23 June and is organized by Tbilisi Pride.

Preparations for the event have already begun, and a preliminary programme of events has been released.

However, many have reacted to the news with indignation – the ultra-right has promised it will not allow a gay parade to be held in Tbilisi.

“We are not going to hide because living like that is unbearable.”

The event organizers say that four events will be held in Tbilisi.

1) A production of Franz Kafka’s Transformation;

2) An international conference on the situation of LGBT individuals in Georgia and the policy of the authorities in this matter;

3) A ‘March of Dignity’, which will be held on 23 June. “It will not take the form of a holiday nor of a carnival because we are not in the mood for a celebration now,” reads the organization’s statement;

One of the organizers, Giorgi Tabagari, says that the risks involved are well-understood:

“Our events are a call to peace and equality. This is not an attempt to provoke or divide the public,” Tabagari says.

Tbilisi Pride says the security of event participants will be managed by state security departments and the authorities:

“The state, the Ministry of Internal Affairs and other bodies are responsible for security. For our part, we are doing everything to organize everything so that people have information about current events,” said Giorgi Tabagari in an interview with Tabula.

The Interior Ministry told Radio Free Europe/Radio Liberty that the pride organizers did not apply to the department with an official letter.

Tbilisi Pride’s Facebook page says: “Violence is committed against us in our families, in schools, on the street and at work. We are attacked at home and expelled from families. They’re killing us!”

The statement says that the participants of the event are “peaceful people” who “are no longer going to hide, because living like that is unbearable”.

The response of the far-right: “We will not allow the propaganda of debauchery.”

Immediately after news about the pride parade was announced, the ultra-right made statements that they would not allow a “gay parade” to be held in Georgia.

• The Georgian March against migrants and NATO

• Georgians march against “uncontrolled migration” in Tbilisi – a photo story

The leader of the Georgian March organization Sandro Bregadze appealed to LGBT activists to “refrain from homosexual propaganda”.

“We have repeatedly warned the Georgian authorities, the Soros Foundation and gay organizations against provocations and attempts at propaganda of debauchery, so that they would not try to impose their depraved ideas and ideals on Georgian society,” Sandro Bregadze wrote on his Facebook page.

Bregadze, who was a member of the government of Georgia in 2014–2016 when he worked as deputy state minister for diaspora issues, also threatens the police and the Ministry of Internal Affairs.

He says that if the police will protect the participants of the parade, a member of the “march” will deal with them “as our ancestors dealt with traitors.”

The lessons of 17 May

Any attempt by the LGBT community in Georgia to hold a street rally has always been faced with counter-rallies organized by the far right and the church.

Researcher Eka Agdgomelashvili says that “anti-gay parades” are held in Georgia much more often than speeches or demonstrations by the LGBT community.

The largest confrontation between anti-LGBT and LGBT groups occurred on 17 May 2013.

• 17 May in Tbilisi – fight against homophobia, Family Day and violence at anti-homophobia rally

Several dozen people gathered in the centre of Tbilisi with posters and balloons to mark the International Day of the Fight Against Homophobia (IDAHO).

However, Orthodox activists, priests and ultra-rightists soon arrived at the rally. They became physically violent, verbally insulted participants and forced them to disperse.

Police put LGBT activists on buses to protect them from the aggressive crowd. However, the nationalists threw stones at the buses and several activists were injured.

A year after these events, in early May 2014, the Catholicos-Patriarch of the Georgian Orthodox Church, Ilia II, declared 17 May as the Day of Protection of the Holiness of the Family.

After that, every year on 17 May, a procession of Orthodox believers with crosses takes place on Rustaveli Avenue. 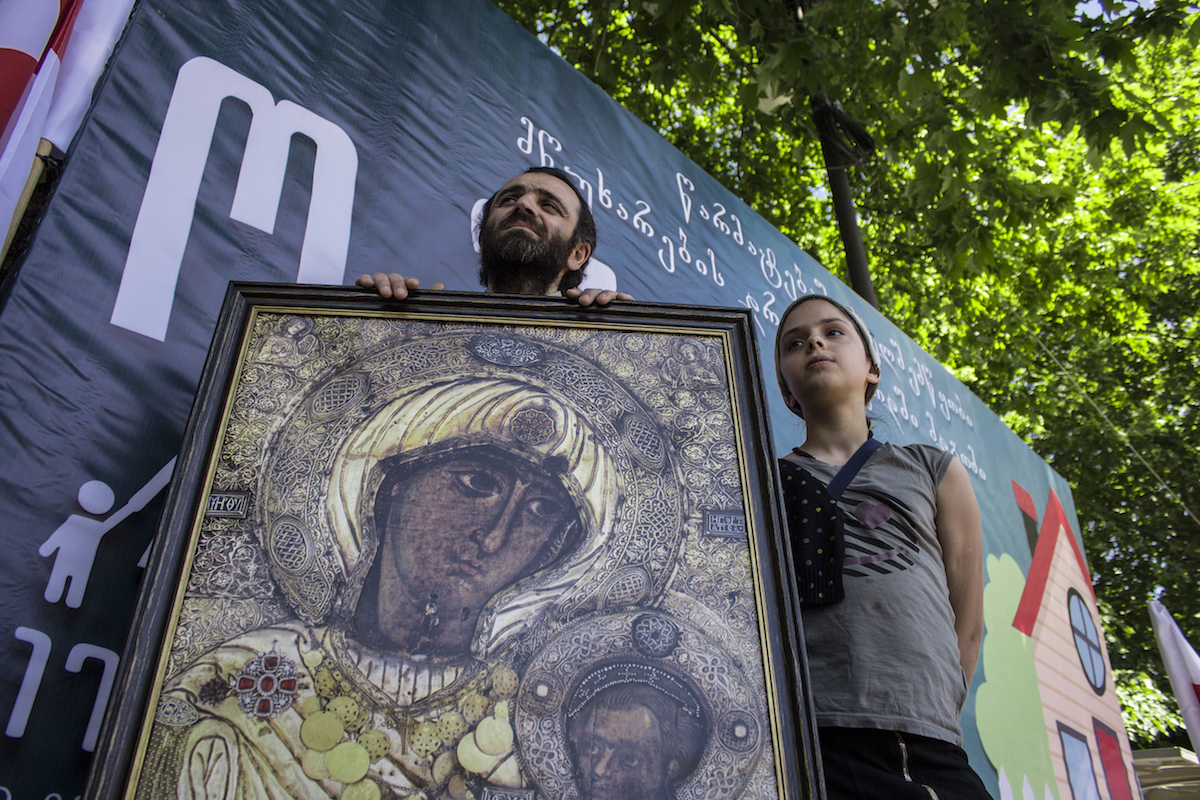 Ilham Aliyev: "If we are defining borders, what NK status is there to talk about?"

«They shot us in foot»: Pashinyan blames former government for failed Karabakh negotiations

US Embassy in Georgia: "Our assistance is impartial"

Ilham Aliyev: "If we are defining borders, what NK status is there to talk about?"

«They shot us in foot»: Pashinyan blames former government for failed Karabakh negotiations