17 May in Tbilisi - fight against homophobia, Family Day and violence at anti-homophobia rally

The International Day Against Homophobia and Transphobia in Georgia took place in a tense atmosphere. On the one hand, several thousand people – the patriarchate, laity, neo-Nazi and ultranationalist groups– have celebrated the Family Day. And on the other hand – LGBT activists, who at first cancelled the planned action “To Comprehend 17 May,” but then a small “guerrilla” group of them did manage to celebrate the Day of Combating Homophobia.

These two events have one significant difference. Participants of the march organized by the Patriarchate were moving freely along the streets of Tbilisi, while LGBT activists had to conduct their main rally under enhanced police protection, with some of the participants arriving at the venue on specially provided transport.

Despite the increased security measures, one of the speakers of the anti-homophobic rally still came under an attack. During the speech, a young man jumped to him, hit him several times and fled. The police detained the bully.

Action against homophobia and transphobia

“No to homophobia, transphobia and fascism” – a rally under this slogans was held near the state chancellery in the evening. The police blocked all the passages to the scene so that no outsiders – apart from journalists – could attend.

Before that, small “guerilla” groups of LGBT activists had managed to hold mini-rallies near the ministries of health, justice, education, internal affairs and rescue services. They spoke about the problems they said they encountered and urged these bodies to take concrete actions:

“We want schools to be safe for everyone! Schools in which all children have the same opportunities regardless of identity so that they all feel protected. Schools where children who need support from adults will be able to get it. Schools in which a strategy for eradicating homophobic bullying is in place. Schools where homophobic bullying is ceased and this problem is considered a priority,” reads the appeal of LGBT activists.

Patriarchy Opposed the Family Day to the Homophobia Day

In the morning, there was a patriarchal procession in Tbilisi from the Rose Square to the Holy Trinity Church. In parallel, several churches held mass weddings. Several thousand people took part in the procession with crosses, icons and slogans about the primacy of family values. Among them were people who have come to be known as particularly aggressive towards the LGBT community and who’ve advocated to have LGBT propaganda prohibited. After the peaceful procession, some of its participants, including several clerics, gathered near the parliament.

One of them, deacon Elizbar, in his address to the crowd, said that “Rustaveli Avenue is now occupied by Orthodox Christians and no gays will dare to stage [any rallies] here … on this day of the triumph of Orthodoxy.” 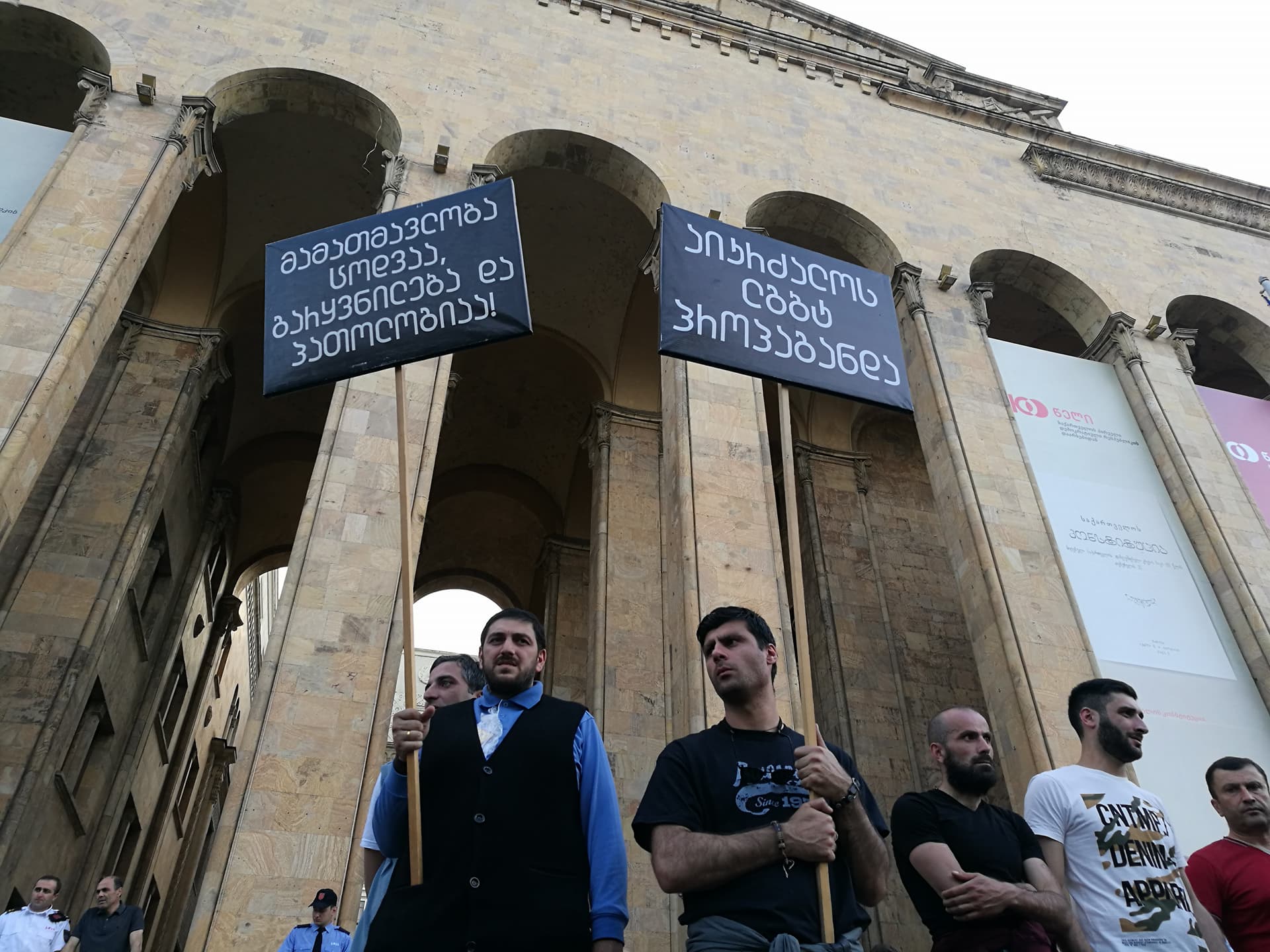 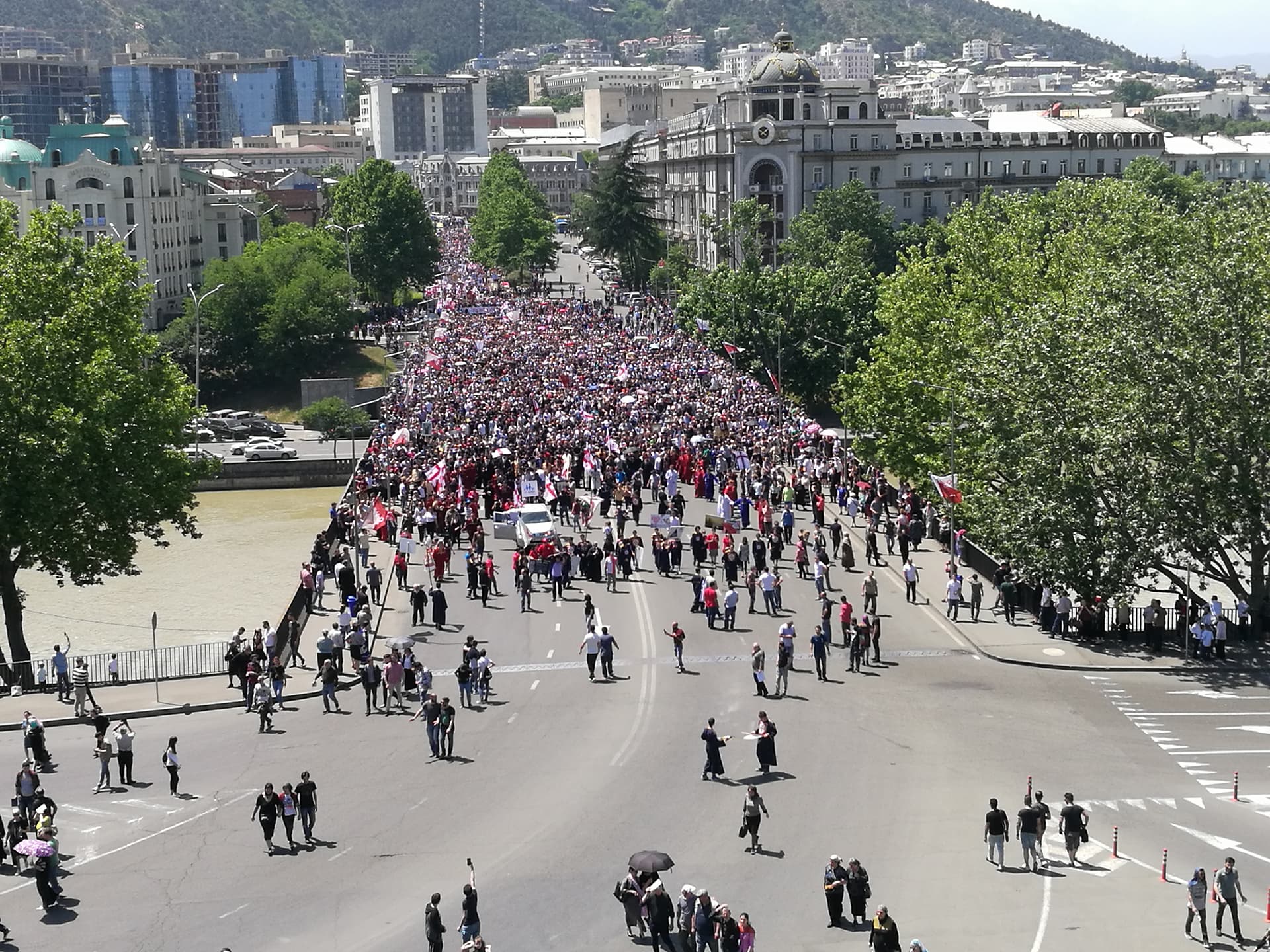 On 16 May, representatives of the LGBT community decided not to hold the planned large-scale rally “To Comprehend the 17th of May”. According to them, there was a danger of confrontation with neo-Nazi and ultranationalist groups, who had been threatening to disrupt the event.

LGBT activists say that the strengthening of right-wing groups in Georgia is a result of the authorities’ irresponsible social policies. Many believe these groups take their strength from the support of the Georgian Patriarch and Russian special services.

After the LGBT activists had issued a statement on the cancellation of their rally, the neo-Nazi group “Georgian March” announced it, too, was cancelling its march along the Rustaveli Avenue – just because the antihomophobic rally had been cancelled, the March leaders said.

How the day of May 17 was in Georgia

International Day Against Homophobia on 17 May has born witness to several altercations over the past six years. The prehistory is as follows:

2012: A run-in between LGBT representatives and leaders of the church. The LGBT march was blocked by members of the Orthodox Union of Parents and the Union of Vakhtang Gorgasali. Pedestrians passing by also joined in the feud and there were a number of physical altercations. Several LGBT activists were detained.

2013: A group of young people with posters and balloons tried to hold a demonstration in downtown Tbilisi calling on citizens to show tolerance toward people of other sexual orientations. The Orthodox Church again got involved. Hundreds of people with homophobic views came out to protest and the police were barely able to save the group from religious fanatics and right-wing, neo-Nazi groups who were ready for a fight. Buses were brought in by the police to take away the protesters.

2014: In the beginning of May, Catholicos-Patriarch of All Georgia Ilia II declared 17 May as the ‘Day of Family Purity’ in the country. After this, a march is held annually on Rustaveli Avenue in commemoration.

2015: A small group of activists tried to hold an event for the International Day Against Homophobia. In order to provide for their security, all entrances to the place where the demonstration was being held were closed off. Twenty buses were deployed, ready to take away the participants in case of emergency.

2016: A “Congress of Families” took place in the centre of Tbilisi. LGBT activists came to the spot of the demonstration with rainbow-coloured chair, an allusion to when clergymen used chairs to beat participants of a rally against homophobia years before that. Police tried to take it away and warned the LGBT protesters. After some time, spiritual leaders gathered to mark the Day of Family Purity.

2017: LGBT activists were able to hold a demonstration near the government chancellery building. It lasted only an hour. Demonstrators were brought in on police buses. Spiritual leaders again held the Day of Family Purity on Rustaveli Avenue.

2018: Nationalist groups warned that they would not allow the International Day Against Homophobia to take place. “We demand that 17 May be only the ‘Day of Family Purity’,” said Sandro Bregadze, a Georgian March leader.