What is happening in the Karabakh conflict resolution process?

This was the question posed by the organizers of a unique discussion on February 15 in Munich, the main participants of which were Prime Minister of Armenia Nikol Pashinyan and the President of Azerbaijan Ilham Aliyev. 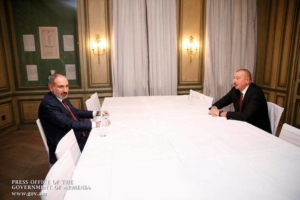 The discussion was held as part of the Munich Security Conference, and lasted around 45 minutes.

The Prime Minister of Armenia stated that “there is no military solution to the Karabakh conflict.”

“If someone thinks differently that there is a military solution – I think the Karabakh people would answer that the conflict has already been resolved. But I am sure that we need long-term peace. … Our duty is to make efforts to [create conditions] for global peace. I assure you that Armenia and Karabakh are ready to make real efforts for this.”

The President of Azerbaijan said that this conflict requires a phased settlement:

“It is necessary to free part of the territories and internally displaced persons must return. The status of Nagorno-Karabakh can be determined later. The status should not contradict the territorial integrity of Azerbaijan.”

The Prime Minister of Armenia repeated what he said before: that the solution of the Nagorno-Karabakh issue should suit the people of Karabakh, the people of Armenia and the people of Azerbaijan. And he emphasized again that Ilham Aliyev has not responded to this idea of ​​his:

The President of Azerbaijan in response stated that “no Karabakh people exist.”

“The Karabakh army consists of citizens of Armenia, and there is an aggressor country – Armenia. We are not ready to talk with Nagorno-Karabakh. They are not a party to the conflict. We are talking with the aggressor – Armenia. Our territorial integrity will be restored.”

Leaders could not resist repeating typical examples of “historical data”, which many experts call propaganda.

Ilham Aliyev said that “in the 19th century, 70 percent of the population of Yerevan were Azerbaijanis.”

Nikol Pashinyan in response remembered the times of the Armenian king Tigran the Great (95-55 years BC):

“He was negotiating with the Roman commander Pompey back in those days when Azerbaijan did not even exist on the world map. I would advise my colleague not to touch on history, otherwise I can go even further and begin the story from the time of BC.”

The Munich Security Conference has been held annually since 1962. Since 1998, it has been funded by the German government.

The forum participants in the first 30 years were military and political leaders of NATO states, political scientists and media representatives.

Since the 1990s, representatives of Russia and other countries of Eastern Europe, as well as China, India, and Japan have been participating in the conference.

In 2020, the Munich Security Conference began on February 14. The presidents of Armenia and France, the prime ministers of Canada and the Netherlands, the Chancellor of Austria, the foreign ministers of Russia and Iran, the secretary general of NATO and the OSCE participated as well.

• 3 years since the Karabakh April War: what has it changed?