How is Moscow handling tourists at the World Cup? 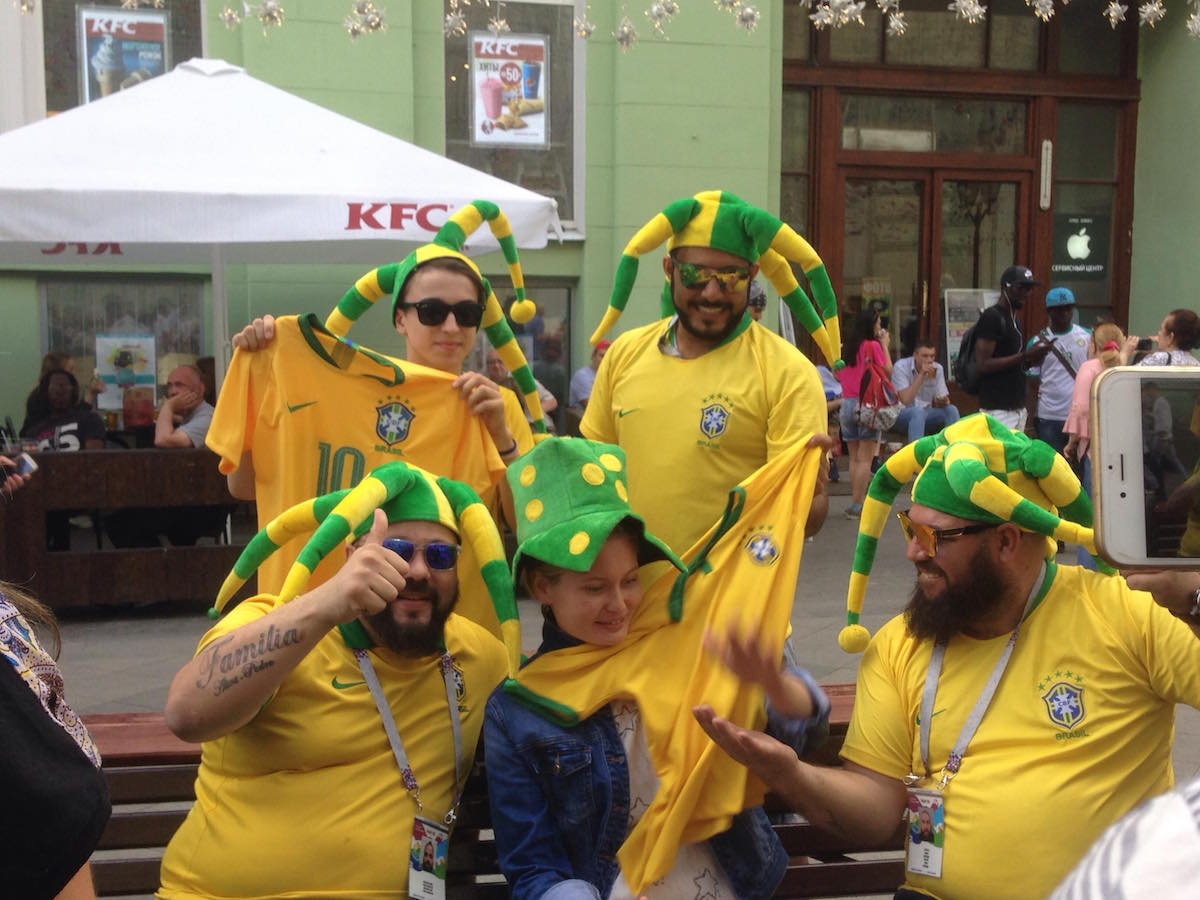 The 21st football World Cup which began on 14 June and will come to an end on 15 July 2018, continues in Russia. It is the first time that the cup is taking place not only in Russia, but in Eastern Europe as a whole.

Many publications are writing about the games themselves, but instead we’ll focus on Moscow and Russians, and how the two of them are living during this ‘unprecedented holiday’.

At the end, we’ll have a peak at some interesting statistics – who bought the most tickets and who these fans are.

Briefly about the emblems 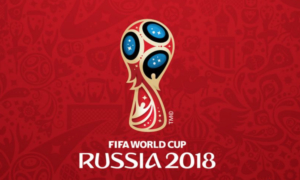 The is the official emblem of the World Cup. A press release of the organising committee said that the main components of the image are the conquest of space, iconography and love for football. 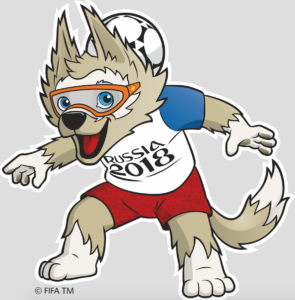 This is the mascot – a wolf by the name of Zabivaka. He was drawn by university student Ekaterina Bocharova who is studying graphic design in the Russian city of Tomsk. The mascot was voted on online by all of Russia.

The official song of the cup is ‘Live It Up’, written and performed by Nicky Jam, and accompanied by American actor and rapper Will Smith and singer Era Istrefi.

Several remarks on the championship so far

Favourites such as Brazil and Argentina were unable to achieve wins.

The current world champion, Germany, also lost its game against Mexico which, as many observers believe, were able to win because they went on the offence and did not wait to go on the defence.

Their best player, Chicharito, even cried after the match, unable to withstand the emotional and physical tension.

Iceland’s team again shocked the world after emerging victorious in a match against Argentina.

In 2016, the team from Iceland made it to the quarter finals, which was a historical success for the country whose total population is equal to that of a commuter district in Moscow.

At first glance, the success of Iceland may be surprising, however it is natural. In Iceland, there are over 300 fields where children and adults can play football year round. For a country with a population of only about 300 000 people, it is quite a large number of football fields.

The most spectacular matches in the first round were those between Russia and Saudi Arabia and that of Portugal against Spain.

The Russians won 5-0 against the Saudis, which is so far the most crushing defeat handed to a team at the championship. 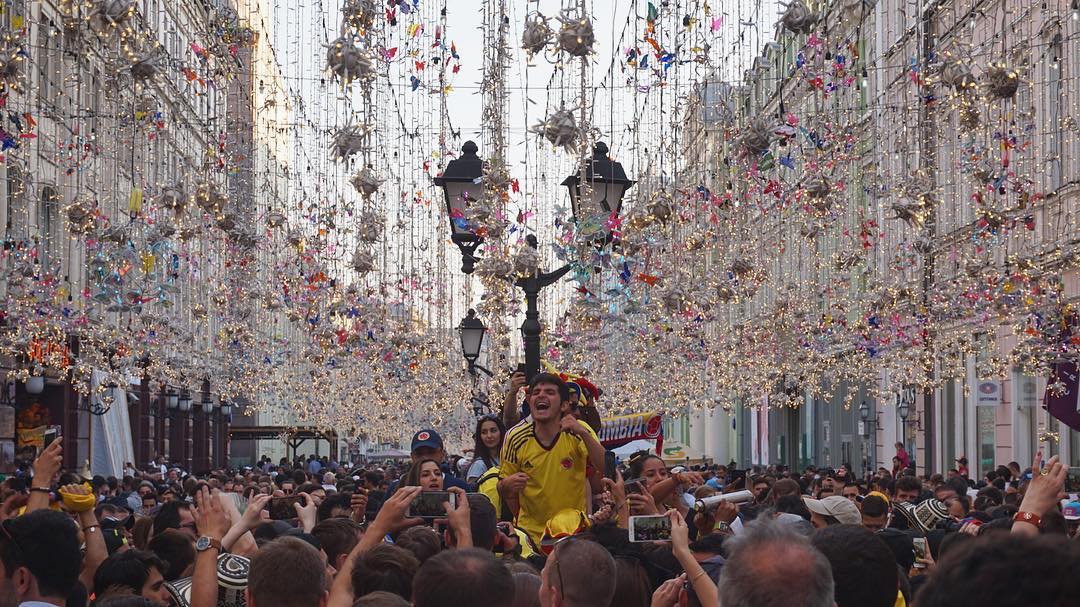 For the most part, people have given positive reviews of the organisation of the championship

The international media and users of social networking sites have reacted positively to the amount of organisation put into the cup in Russia. Many write about the high level of coordination and about the level of friendliness of local residents and their willingness to help.

The comment below, made by an English fan, is rather typical of what fans have to say:

“I settled into Tver, 200 kilometres from Moscow, but it’s cheap. I returned late at night and got lost. I met a group of Russian football fans. This is my sixth World Cup. Nobody has ever treated me so well and gotten me so drunk before!” 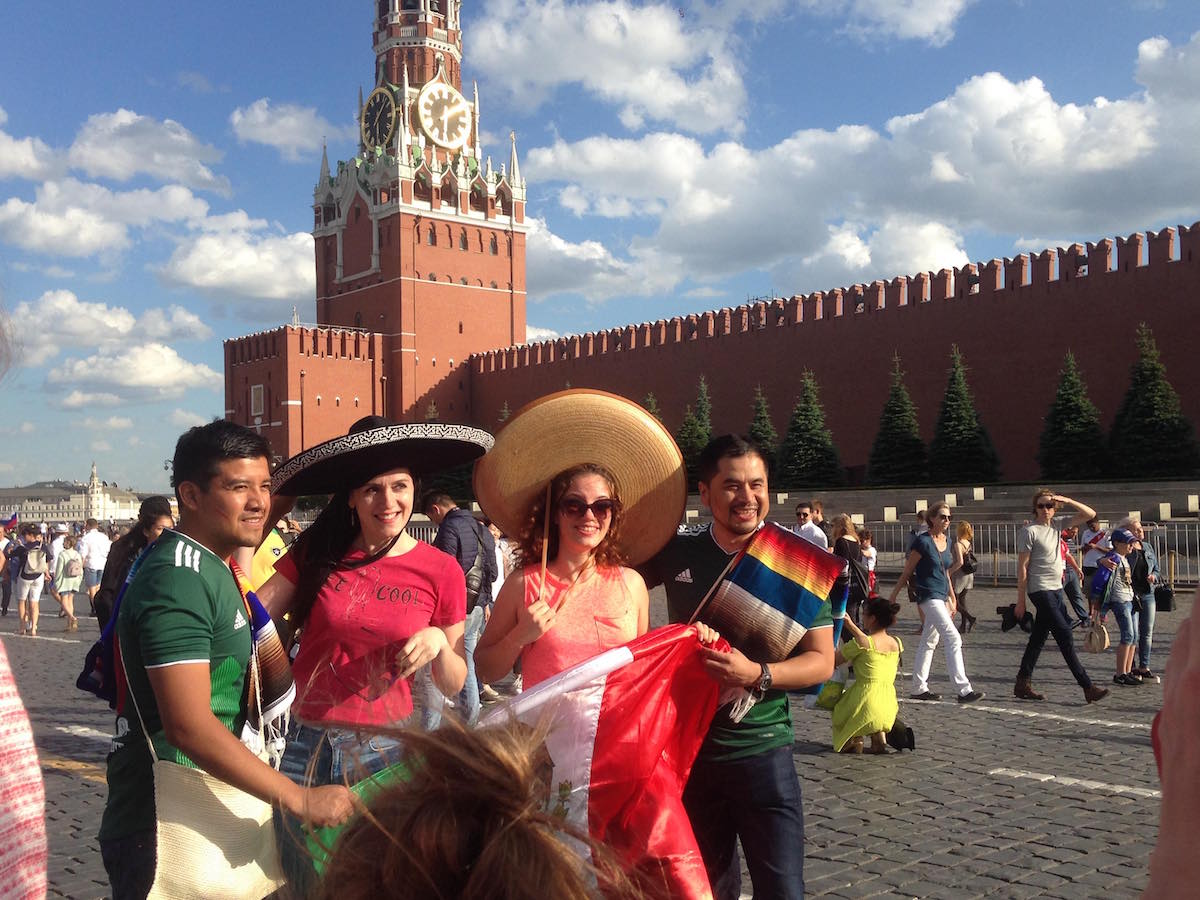 You won’t surprise a Muscovite with traffic – an hour and a half to work and the same amount of time to go home is rather normal here. But what has been going on here during the days of the championship is something altogether new.

Even at night, traveling on the road from Sheremetevo Airport to downtown Moscow takes no less than two hours.

Moscow taxi drivers have raised the prices for their services by about a third. One popular story making the rounds concerns a taxi driver who, having taken a Peruvian fan from the airport to their hotel, explained to him that the 1 200 shown on the meter wasn’t in roubles, but in euros. 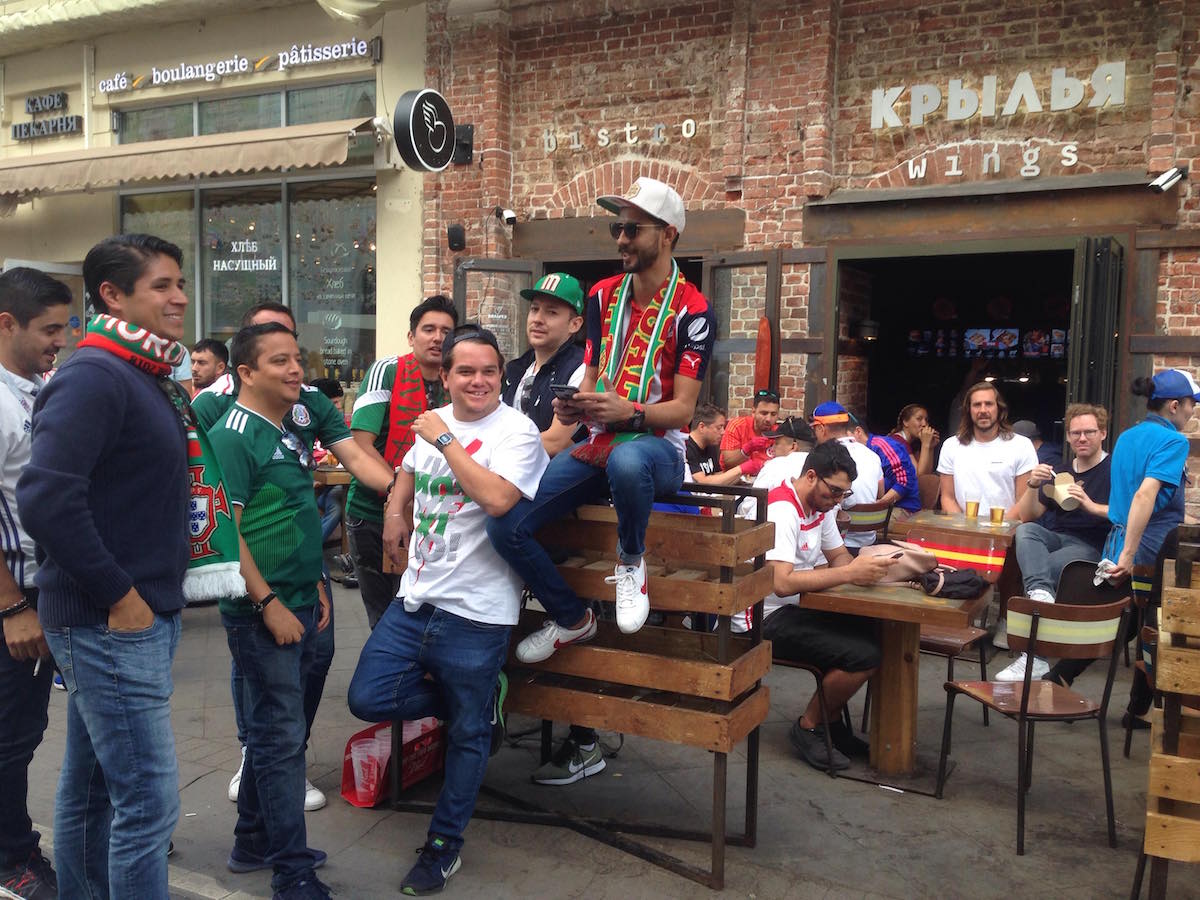 Moscow last saw lines like this coming out of McDonalds some 28 years ago when the first branh of the American chain opened on Pushkin Square.

This can be explained not only by the fact that the logo and the predictable quality of food are well known by foreigners, but by the prices too.

The problem is that Moscow restaurants and cafes are doing the same as taxi drivers – one of the biggest tricksters in town, Luzhniki, which is at the stadium itself, has put forward two menus, one in Russian and one in English. The content is the same, but the prices are different by a third.

One category of residents of the Russian capital that is happy about the event are, of course, the youth. Judging by their outfits, it would seem that they had long been suiting up for the championship.
And their efforts have not been in vein – activity on Tinder in Russia grew by some twenty percent in the week leading up to the beginning of the championship. 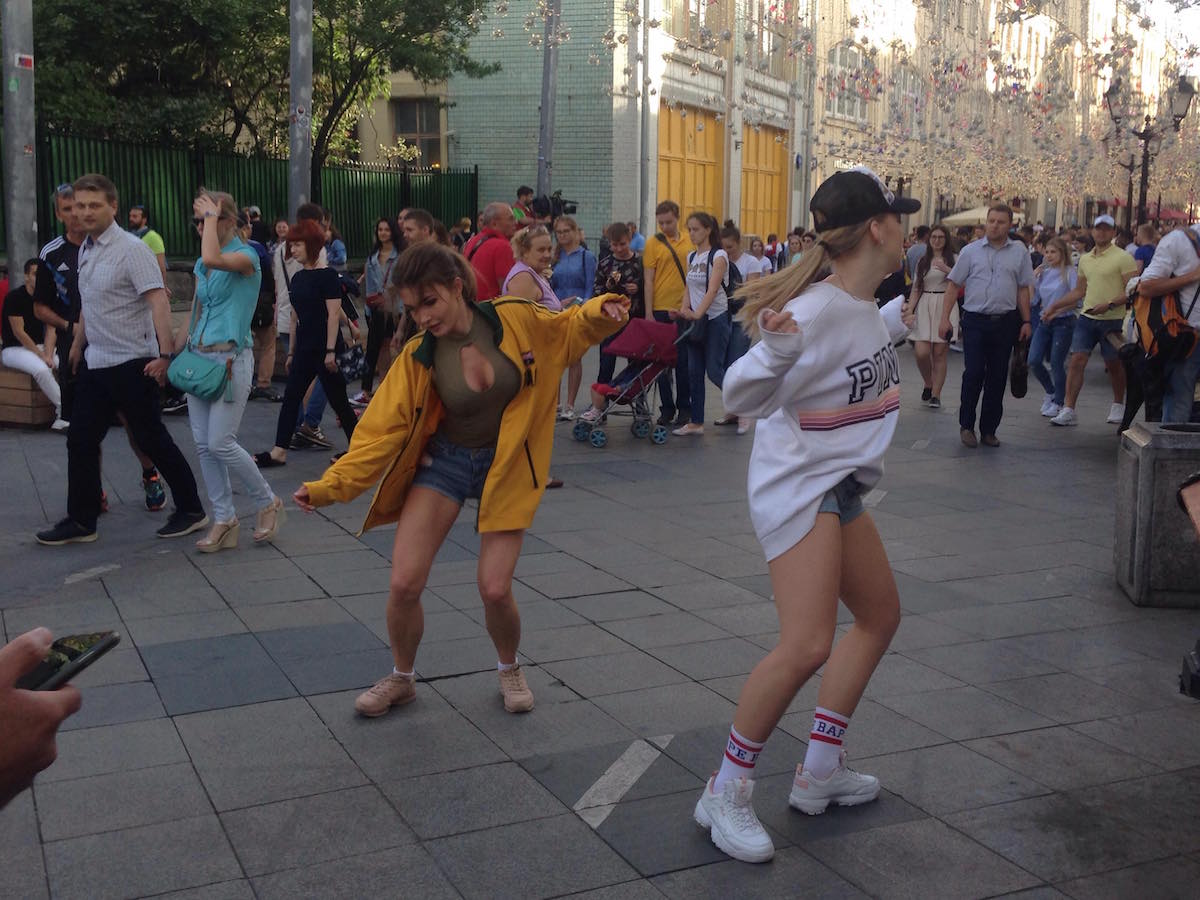 The number of police officers, special forces units and volunteers is not far behind that of football fans.
The police are generally addressed by foreigners to find out how to get to one place or another. Moscow is a city that is difficult to navigate and during the championship, demands on internet and mobile providers have grown so high that the usual means of finding one’s way have become difficult.
The police, seemingly readily answer, are not quite at ease with the language issue. A JAMnews correspondent witnessed the following scene: a crowd of policemen armed with automatic weapons and two sheepdogs on leashes surrounded an individual who had asked for help. The impression was such that it seemed as if they were capturing a terrorist.
It turned out that this was not the case – they were trying to explain to some European football fan how to get home to the apartment that he had rented.

Before our journalist was able to help, the problem had been solved by a senior police officer, who explained with gestures and his hands that he was willing to take the tourist home in a large police bus generally used for transporting detainees in large numbers. The bus had barred windows.

One of the first scandals took place when singer Yulia Chicherina was not allowed by FIFA to perform in the city of Rostov in front of fans. The reason, they say, was that the singer was well-known for her separatist-sympathies in the south-east of Ukraine and that her songs, a FIFA letter explained, ‘contained calls to war’.

In response, Chicherina in an open letter called the authors of the FIFA prohibition ‘football Banderites’.

Social media also exploded with comments around the ceremonial concert on Red Square in Moscow which was dedicated to the opening of the championship. Two performers in particular were mentioned: opera singer Yusif Eyvazov and Anna Netrebko. But it wasn’t their vocal mastery which was criticised.

One theme touched upon was the gigantic diamond brooch worn by Eyvazov.

Another topic was the repertoire which was chosen by Netrebko. She sang a Chaikovsky romance and during her performance she constantly turned her head to the walls of the Kremlin. Users of social media unanimously came to the conclusion that she addressed the song to President Putin.

But the most merciless criticism was addressed to a video clip in which Aleksandr Malinin and his daughter Ustinya performed the official hymn of the championship. 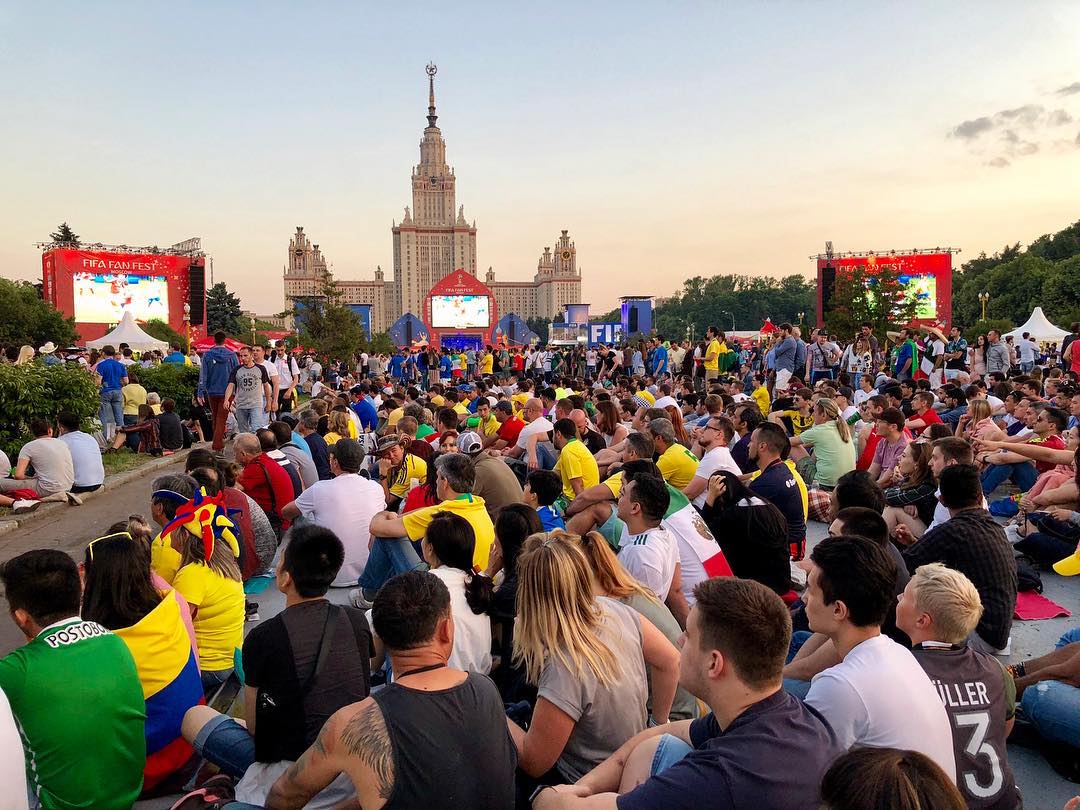