First meeting between MFAs of Georgia and Russia in 11 years: What we know

On 26 September, at the 74th session of the UN General Assembly, the ministers of foreign affairs from Georgia and Russia met for the first time since the 2008 war and dissolution of diplomatic relations between the two countries.

Before leaving for New York, Georgian Minister of Foreign Affairs David Zalkaliani did not make a statement about a possible meeting with his Russian counterpart.

•Who is the Russian Orthodox communist who provoked protests in Tbilisi?

The Russian Ministry of Foreign Affairs (MFA) and Russian media were the first to break the news about the meeting.

There is scant and contradictory information about the joint meeting and no official picture of the two ministers together.

The Georgian Ministry of Foreign Affairs website, under the heading “news”, contains information on all of Zalkaliani’s meetings in New York, with official photographs, except for the meeting with Lavrov. 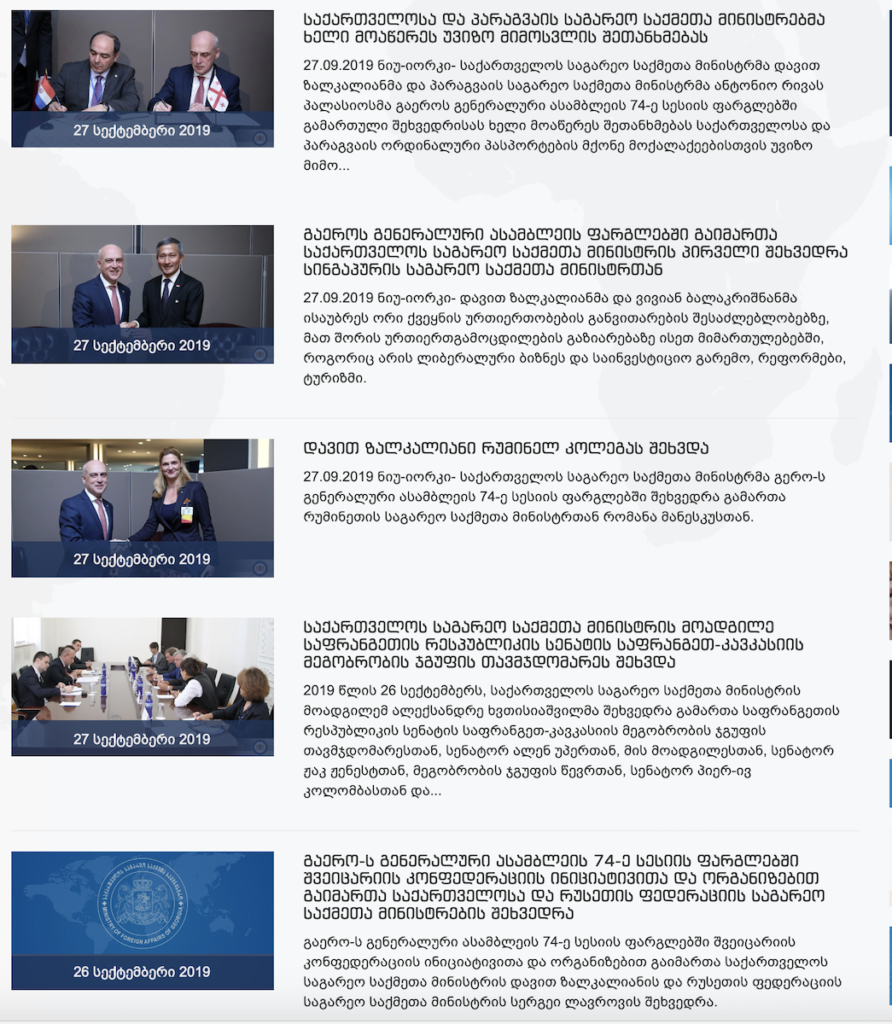 From the Georgian side, the meeting was presented as an initiative spearheaded by Swiss partners (following the dissolution of diplomatic relations between Georgia and Russia, the Swiss embassy in Moscow began representing the interests of both parties – JAMnews).

Zalkaliani announced in New York that the meeting with Sergey Lavrov was approved after consulting with strategic partners, who considered it an opportunity for Georgia to tell Russia its demands on an official level.

Russia presented another version. Pro-government newspaper Kommersant referred to a source within the Russian Ministry of Foreign Affairs who indicated that the meeting was held on Georgia’s initiative, not Switzerland’s.

Kommersant described other details of the meeting, namely that the two officials met for two hours.

The meeting was not held in the room reserved for the Russian delegation in the UN building, where Lavrov, as a rule, meets with various delegations.The discussion took place, rather, on neutral territory in the UN secretariat.

Kommersant wrote that: “Georgia believed that due to political considerations, a direct conversation with Russia would be undesirable. Despite that, the meeting turned into a bilateral one.”

A Russian diplomat at the meeting told Kommersant that in the negotiation room with Lavrov and Zalkaliani, a special representative from the Swiss mission to the UN, Jurg Lauber, was present for a few moments but then left the room.

The source said, “Lauber greeted the ministers and offered them Swiss chocolate, then informed them both that his function as intermediary had ended and left the two officials to meet.”

The Russian outlet concluded that the meeting, if not a dramatic turning point in Russian-Georgian relations, was at least a significant step in improving relations, and this was also echoed in Lavrov’s statement after the meeting.

After the meeting, Russia’s MFA announced that Moscow is prepared to reconsider the decision it made in June to suspend flights from Russia to Georgia.

Relations between the two countries soured after Russian Communist deputy Sergei Gavrilov came to Tbilisi to participate in the Parliamentary Assembly of Orthodox countries.

Georgian citizens were upset by the fact that Gavrilov inaugurated the assembly, which was held in the parliament building, and he assumed the chair of the parliament’s seat and addressed the audience in Russian.

On June 20, after the incident, thousands protested in Tbilisi in front of the parliament building. Protests lasted for more than three months.

Also in June, Russian president Vladimir Putin decided to suspend flights between the two countries. Putin warned Russian tourists against traveling to Georgia because of the dangers posed by ‘anti-Russian hysteria.’

What was discussed at the bilateral meeting?

A few hours after the meeting, the Georgian MFA circulated a comment by Zalkaliani in which he said that the main topic of the conversation with Lavrov was “de-occupation and illegal borderisation.”

In a video released by the Georgian press service, Zalkaliani said, “We spoke on important topics of de-occupation and illegal borderisation. And we also spoke about other problematic issues in Russian-Georgian relations, including those connected with the Geneva negotiations – both Russia’s and Georgia’s positions on them.”

Zalkaliani did not mention how Lavrov responded in the meeting. It is also not known at this point if this was the first of more meetings or if there will be only one.

“Pressing issues on the agenda of bilateral relations such as regional security, were discussed,” according to information circulated by the Russian MFA

Responses from Tbilisi, Moscow and Brussels

Georgian Prime Minister Giorgi Gakharia expressed hope that “this meeting will help resolve the most complicated issues in Georgian-Russian relations.”

He also emphasised several times, and told journalists that the meeting took place “in sync” with international partners, and according to him, “war is not an option.” This was his response to the meeting between the two ministers.

“A cold, dogmatic policy and the position that war is not an option is the platform from which we must speak with everyone in order to lay the foundation for democratic development and the unification of the country,” Gakharia said.

Part of the opposition considers it unacceptable to resume direct dialogue with Russia. Representatives of the United National Movement opposition party believe that Minister Zalkaliani should speak to the parliament about the meeting with Lavrov and explain what topics were discussed.

According to an expert on conflict Paata Zakareishvili, the Georgian authorities were forced to hold this meeting in order to defuse the tension brewing along the line of occupation.

According to Zakareishvili, meetings of this kind will not solve the problem of territorial integrity. More minor issues, such as the location of the post in the village of Chorchan and the construction of fences could be resolved in such a bilateral forum.

“It is clear that there was no other way. The meeting was supposed to take place, since the installation of posts posed a serious threat to escalating tensions. If the situation at the dividing line is discharged and the tension ceases, we will see that this meeting did indeed make sense,” Zakareishvili said.

According to political analyst Tornike Sharashenidze, there are no threats in the near future, should relations with Russia turn to a bilateral format, despite the opposition’s concerns.

“I do not believe that in the near future there will be more bilateral meetings at the ministerial level, because the opposition would criticise Zalkaliani and the Georgian Dream for doing so. Thus, officials could refuse to meet in an election year,” Sharashenidze says.

According to him, the purpose of the meeting was supposedly to improve relations, and if the two ministers spoke about de-escalation, then it could happen.

“What do we lose from this meeting? If we stop the ‘borderisation’ – that would be a positive gain,” said Sharashenidze

Shota Utiashvili, a senior researcher at the Rondeli Foundation, believes that this meeting is a step backward for Georgia.

“After the 2008 war, it was Georgia that severed diplomatic relations and stated that they could only be restored if the process of de-occupation were successful. Russia supported the unconditional restoration of diplomatic relations. If we consider the meeting of foreign ministers as part of the process of normalising relations, then this meeting is undoubtedly a success for the Russian side, and a step backward for Georgia,” said Utiashvili.

The EU considers the meeting between the two ministers positive.

The press spokesperson for the EU’s chief representative for foreign policy and security calls this meeting “a significant opportunity to consider regional security issues” and states that “all parties should be constructively involved in the conversation in order to alleviate the effects of the conflict on people.”

The 26 September declaration states that “the meeting between Zalkaliani and Lavrov was a significant opportunity to review issues of regional security, reduce tensions in the two countries’ relations and turn attention to the effect of these tensions on citizens in the countries. Dialogue is a key to the peaceful resolution of this disagreement, which the EU fully supports.

The declaration also notes that “the EU once again supports the territorial integrity of Georgia in relation to internationally-recognised borders.”