Security specialists have already revealed that the document is fake, however it is unknown who wrote it. The letter is being handled by the National Security Service of Armenia for further investigation. 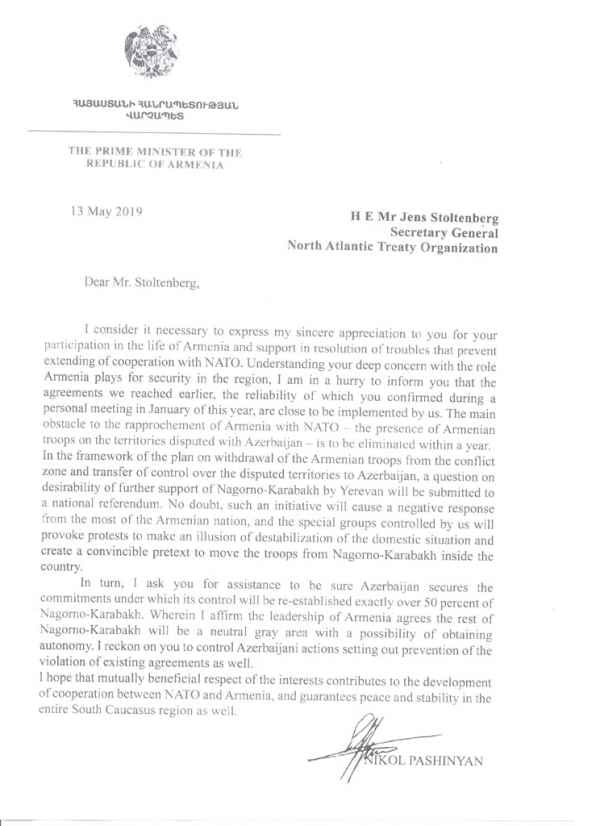 • Dutch entrepreneurs come to Armenia to teach, stay to live

What the letter says

In the letter, PM Pashinyan allegedly writes about Armenia’s readiness to deepen cooperation with NATO, which is, however, hampered by the “presence of Armenian troops in the disputed territories with Azerbaijan. This obstacle will be removed within one year.”

“A national referendum on the question of the advisability of Yerevan’s further supporting Nagorno Karabakh will be held, within the framework of a plan to withdraw the Armenian armed forces from the conflict zone and transfer control over the territories to the Azerbaijani side.”

Samvel Martirosyan, an information security expert, was among the first to report that the fake letter had appeared on the internet.

Martirosyan says that from a technical point of view, the letter was prepared professionally, but notes the English in which the letter was written is not perfect.

Samvel Martirosyan stated that the author of the letter, most likely, is not from Armenia:

“There are ‘foreign’ traces. There are several options, but I will not name them now, since I have no evidence. But it is obvious that the letter was not composed in Armenia. Here, even the most vicious opponents of Pashinyan note on forums that the letter is a fake.”

Later the Ministry of Foreign Affairs of Armenia confirmed that the letter is indeed fake.

While there are no public doubts about the lack of credibility of the letter, recent official statements on the position of Armenia in regards to the resolution of the Karabakh conflict further confirm this view.

Foreign Ministry Spokeswoman Anna Naghdalyan stated at a weekly briefing that Armenia would not accept a one-sided compromise:

Another fact that opposes the statements in the letter is that on July 3, the Armenian Foreign Minister went to Karabakh.

Spokeswoman Naghdalyan said that Foreign Minister Zohrab Mnatsakanyan meets with the leadership of Nagorno-Karabakh before and after meetings with his counterpart, the head of the Foreign Ministry of Azerbaijan. The purpose of these meetings is to involve Stepanakert officials as much as possible in the negotiation process.

At the moment, the representatives of Nagorno-Karabakh are not represented at the negotiating table. PM Nikol Pashinyan insists on their return to the negotiation process immediately after being elected prime minister, but Azerbaijan has come out categorically against the idea.