In Armenia, 310 children are registered with the Ministry of Labor’s disabilities department for autism.

However, the National Health Institute says the number of children with autism is much larger – their records indicate that in the past year alone, 564 cases were registered by medical institutions.

The number may be even greater still: in Armenia, many children with autism live undiagnosed with the condition because their families hide them from the public and society out of shame and fear of stigmatization.

A woman on the TV screen repeats the names of fruits, syllable by syllable. The children closely follow the movements of the woman’s lips, and then, with the help of their teachers, try to find these fruits among the pictures on the table.

“We use this method with children who have problems speaking and interacting with their environment. It is difficult for children with autism to communicate with people,” explains Lena Harutyunyan, who founded Teach Me More, a public learning and development centre”.

Lena knows what it is to be a parent to a child with autism. Her 12-year-old son Narek was diagnosed with autism when he was just one and a half years old.

“Narek and I went to different centres and he underwent special therapies. After numerous attempts, we realized that all our efforts were in vain. Nothing was helping him to communicate.

“After a long search, I came across Laura and Brian Kasbar’s method, which has been used in the USA for 15 years. Of the Kasbar’s seven children, three of them have autism and speech development problems. After using their method, Narek finally started speaking,” says Lena Harutyunyan. 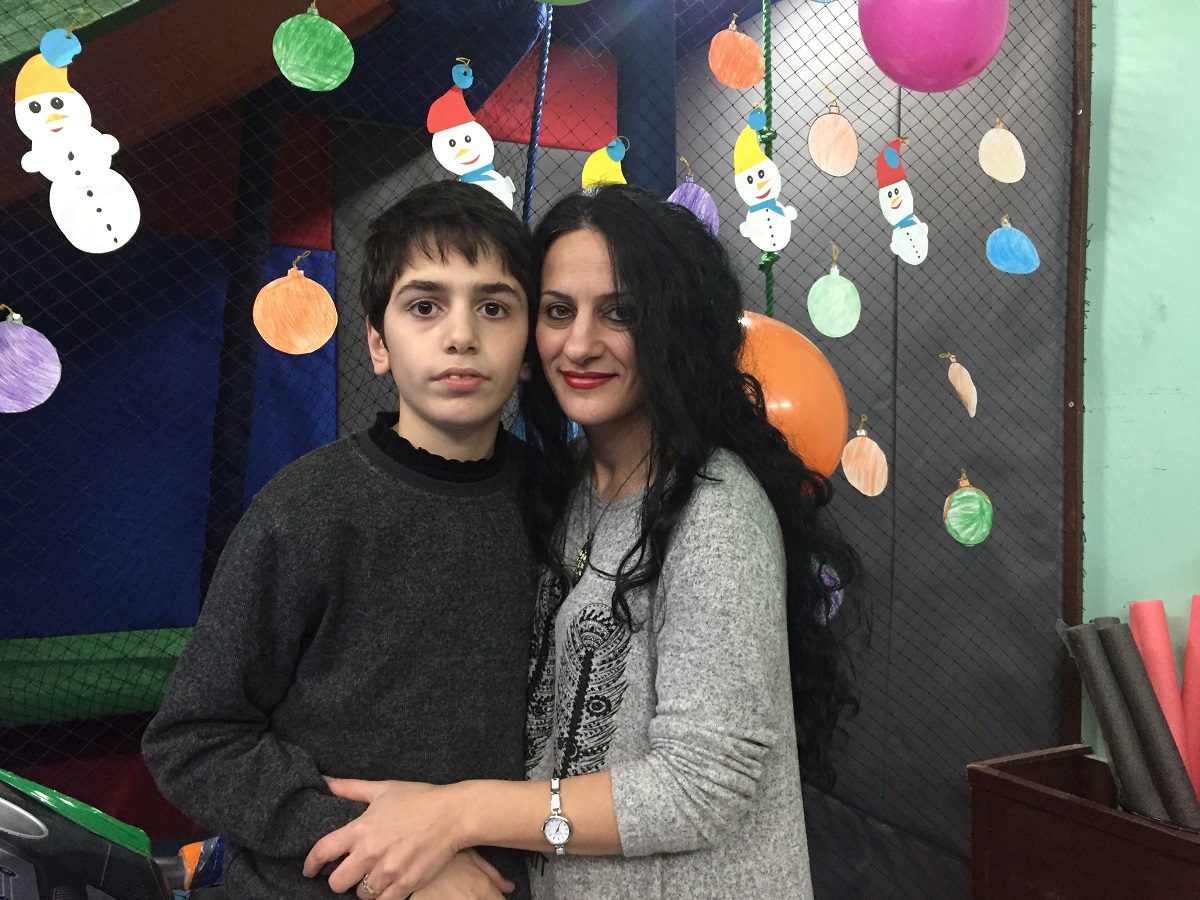 The secret of success

Kasbar developed her method out of necessity.

After many failed attempts to teach her son to speak, she learned two important things about him: he was a visual learner, but easily overwhelmed by people.

Kasbar realized that if her son was to learn to speak he would need a visual aid, a medium less intrusive than a three-dimensional walking, talking person. The answer came to her suddenly – video was the answer. Kasbar had her husband film her in a series of videos saying different words with the framed focused on just her mouth, so her son could see how words were pronounced without any distractions.

The results were dramatic. Her children with autism not only learned how to speak and read, but even completed the school curriculum before their peers – they entered college at only 16 years old.

Bringing Teach Me More to Armenia

After witnessing her son’s transformation, Lena, a linguist and school psychologist, adopted the Kasbar method, and uploaded her own videos to the internet in Armenian.

“It all started when we started posting videos in 2016. Parents asked us to post more and more videos online. We were constantly receiving feedback from parents that their children were watching and were engaged. It inspired us.

“But I soon realized that I couldn’t do it all by myself. I was chatting with parents on skype, on the phone, managing the Facebook page – there was so much to do. As a result, we opened a small centre, attracted specialists and got to work,” says Lena.

It employs psychologists, speech therapists and teachers to conduct individual and group classes at the centre’s school. 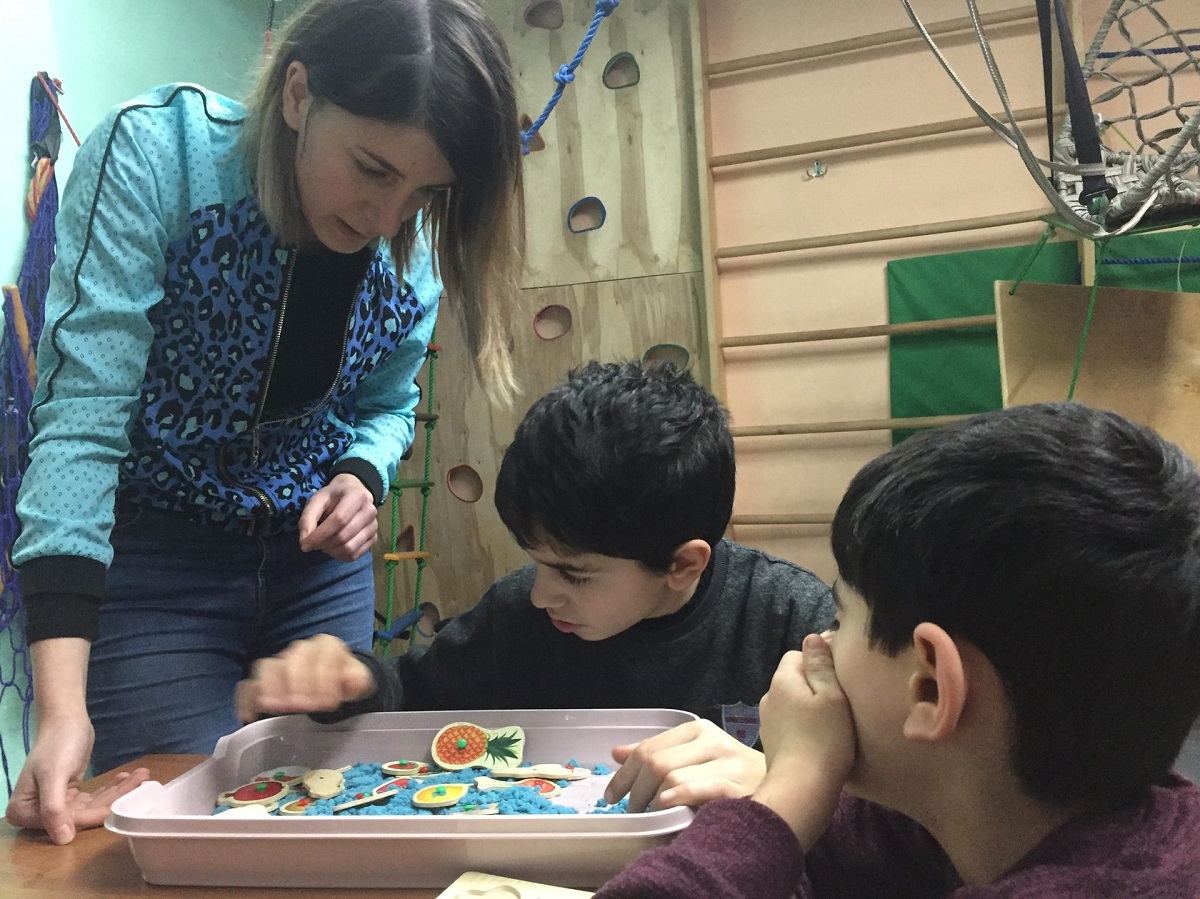 The school’s admissions committee considers each child individually and determines which programmes will fit with his or her specific needs. The centre offers a number of clubs designed specially for children with autism.

In one Teach Me More classroom, teacher Evelina Hovhannisyan is helping Narek write an exercise.

“I just support his hand, because his motor skills are underdeveloped, and he writes by himself and expresses his thoughts. We talk – I speak to him, and he responds to me in writing,” says Evelina. 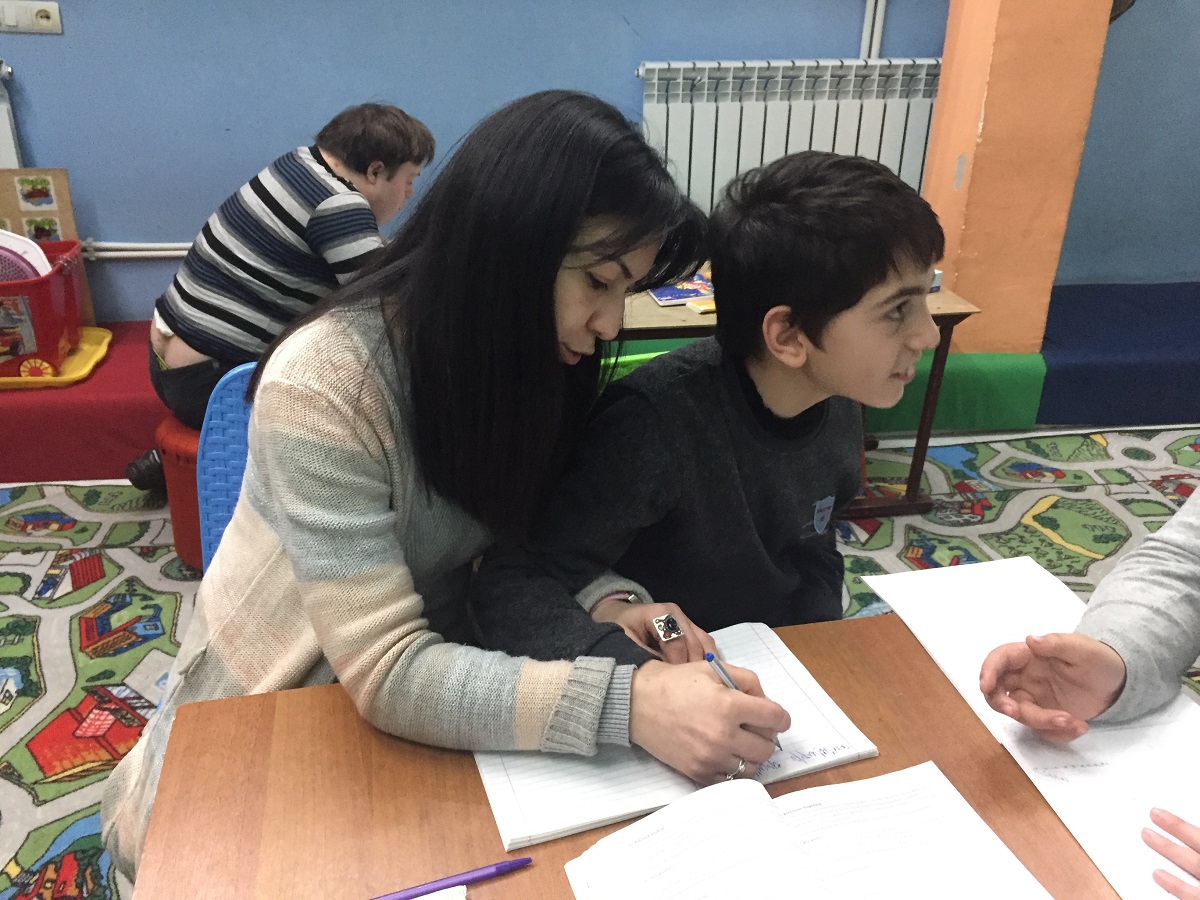 Evelina says the role of each teacher is extremely important in preparing a child with autism for independent living:

“We begin work with a psychologist, then later with a specialist. The psychologist works with the child to resolve behavioral and memory problems. These are just some of the things a child with autism must work to overcome – one by one.”

What is taught at the centre

Though each child receives individual attention, group classes are an important part of the centre. In group classes, three specialists take part together: a teacher, a psychologist and an occupational therapist.

“We develop fine and large motor skills – we teach them to hold objects, walk, run, jump, eat, and use the toilet. We give them the essential skills they need. We try to make them freer and more independent. Children who do not have Autism acquire these skills through natural development. We are trying to help Autistic children acquire the same skills.”

Lena Harutyunyan says parents who are unfamiliar with autism struggle to accept children who don’t quite match societal expectations.

“A simple example: A child with autism does not want to go somewhere and starts to scream. People become frightened, and do not allow their children to communicate with children like ours. They tell their children that our children are crazy, that they may hit you. By kindergarten, the problems have already started.” 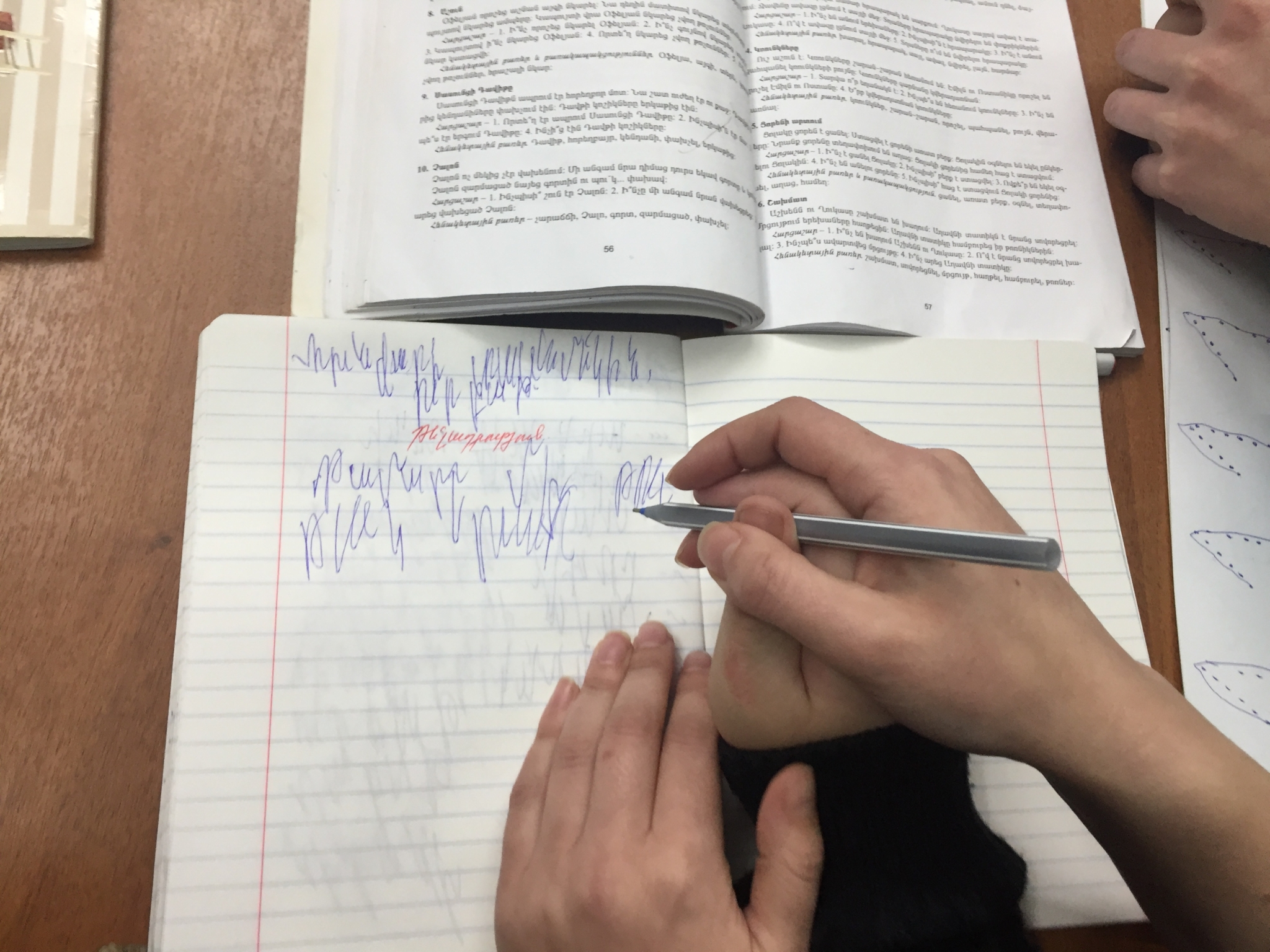 Narek is now 12 years old and studying in a secondary school. At the beginning he could not sit still in a lesson for more than five minutes without starting to scream and run around the class. However, as a result of his hard work at the centre, his behavior has changed.

“The introduction of inclusive education was overdue in Armenia. I would very much like to see children with similar problems next to mine. I would be better prepared to be the mother of such a child myself. There are stages through which a parent must go. For example, the period of denial – when you do not understand that you can have such a child. It takes time to come to terms with the situation and start doing something about it,” says Lena.

“Then comes the period when the parent must struggle against prejudice in society. The child was born this way – our duty is to allow the child to grow and provide for him or her. But we need the support of the state. For example, we need day-care centres so that parents can leave their children there for at least seven hours and work,” says Lena. 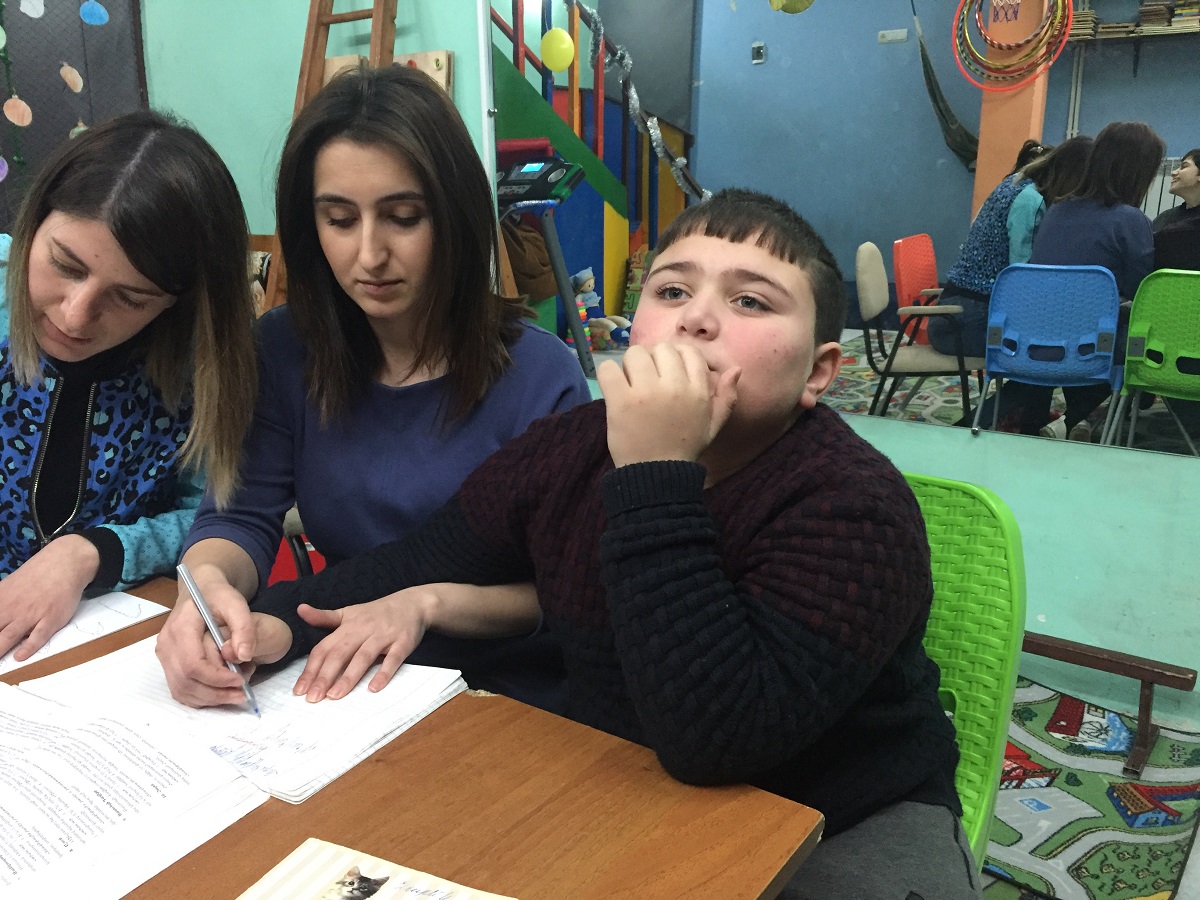 Lena says there are no such centres in Armenia, and that most parents of children with autism cannot work.

“And if the parent is a single parent, then the situation becomes downright impossible.”

The head of Teach Me More notes that employment is a particularly difficult issue when it comes to individuals with autism.

“The parent of a child with problems will definitely think about how he or she will begin to live independently. The state should help us with the creation of employment centres so that our children in the future will not be isolated in their homes. We must try to provide them with employment that suits their specific abilities so that their skills can benefit society.

“Ultimately we teach our children so that they are prepared for work and independent living. Abroad I’ve seen children with autism who are already working and supporting themselves – this is a possible in Armenia as well,” says Lena.

The center serves as an example

For three months now, Tigran Gevorgyan has been working at the “Teach Me More” center. He helps kids learn to read and write. 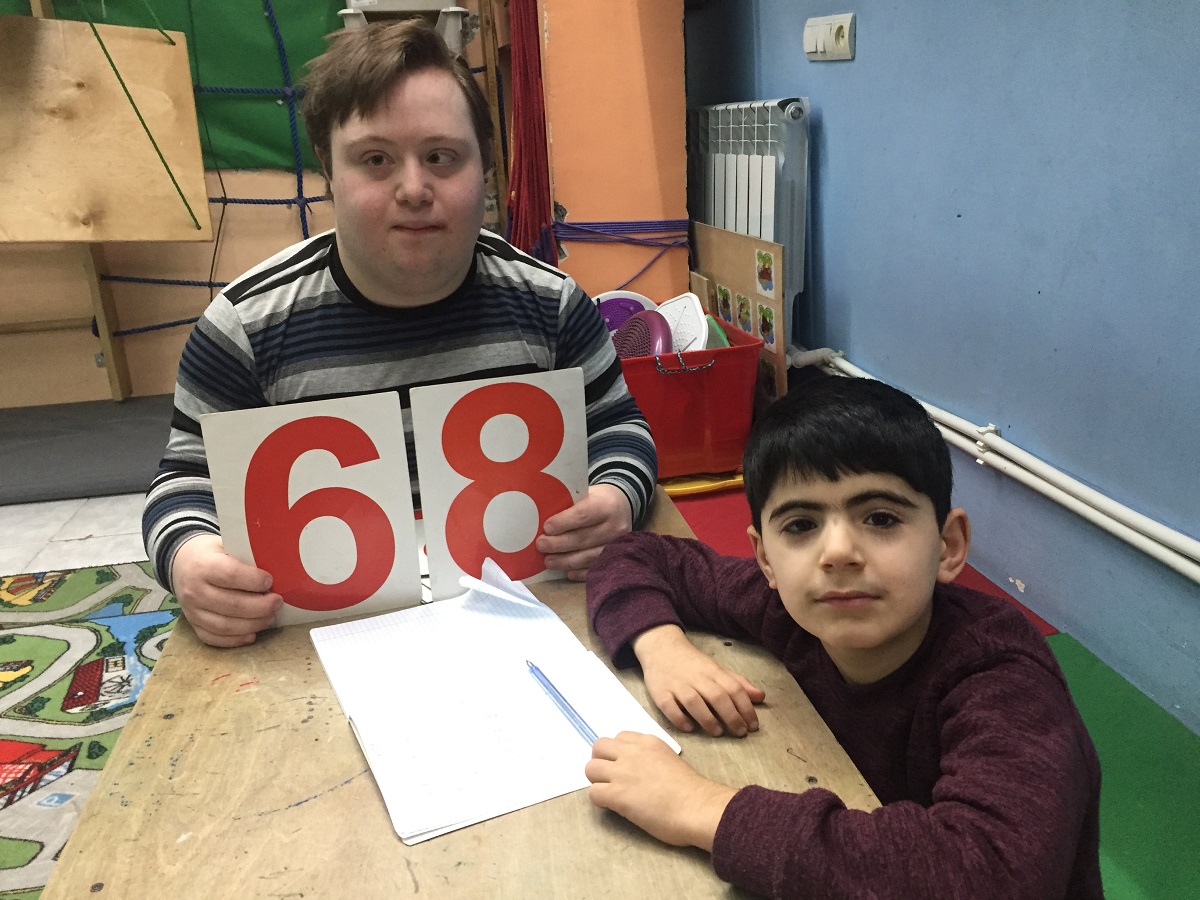 “I come here by myself from home, I feel very good here. And most importantly, I am already working”, says 24-year-old Gevorg, who has Down Syndrome.

Lena says there are parents who believe that change will come in just a few lessons. Then they realize that the road is long. It is necessary to overcome unrealistic expectations for the sake of the child.

“The parent is the driving force for the child. If a parent keeps a child isolated from society because of their problems, they will never recover․ First, parents need to work on themselves – to accept reality. If they do not, how can society accept their child? There’s no need to blame ourselves – to ask why this happened to us. This has already happened. We need to live in the present and future. Let’s start right now,” says Lena.