Chance to get rid of a transfer needle

Remittances (also referred to as transfers) are a good thing, except when they stop – that’s how the British The Economist begins its article about remittances from Russia to the former USSR countries.

Of course, they did not stop completely in Armenia, but they considerably dropped, especially in 2015. Nevertheless, one thing is absolutely clear: the situation is bad. It’s bad not because there is a drop in remittances, but rather because the country’s economy depends too much on them.

Given this dependence it does not matter whether remittances drop or increase, as there will be problems in both cases. At present, the problems emerge because the domestic consumption decreases as a result of reduction of remittance flows from abroad and that has a negative impact on the whole economic activity. The situation was different at the end of 2000s: remittances were increasing, resulting in Dram appreciation, which in turn, affected local producer-exporters.

Almost all countries of the post-soviet area suffer from this disease, that resembles drug addiction (of course, this disease develops in each country with different gravity), and if a drug addict’s dose is decreased, withdrawals begin and overdose may result even in lethal outcome.

The CIS countries have one more similarity – Russia is a source of remittances for almost all of them. And aggravation of the economic situation in Russia has its impact nearly on all of them.

The most acceptable method of assessment of each country’s dependence on a “transfer needle is to determine a Remittance /GDP Index correlation.

According to the preliminary data, this index in Armenia totaled approximately 15% in 2015. Last year, migrants, working abroad, transferred to Armenia approximately US$1.6 billion (including US$1billion from Russia), a GDP level totaled US$10.6 billion.
In 2014, the country’s GDP in US dollar equivalent totaled approximately US$11.6 billion, the remittance inflow exceeded US$2.1 billion – that is a correlation Remittance /GDP exceeded 18%. Reduction of this index was not conditioned by GDP growth, but rather by a drop in remittance. In 2015, total transfers from natural persons from Russia alone dropped by over US$ half a billion and it was a rather huge amount for such an economy as Armenian is.

The situation in Armenia can be considered enviable as compared with other countries. This could be seen at the diagram (which is based on GDP and remittance rate data that we’ve independently obtained from different sources). 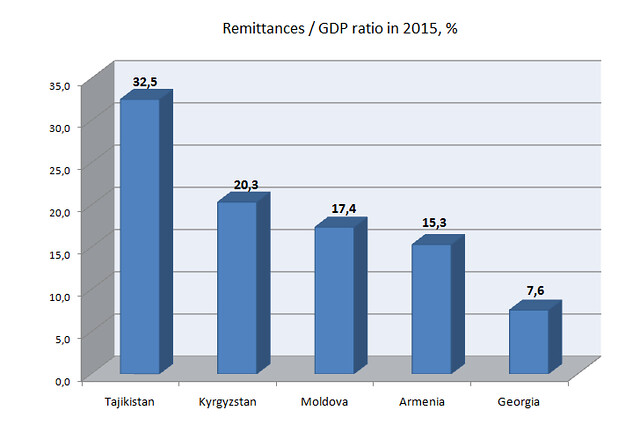 As for Georgia, this correlation is low and totals 7.6%, but if we consider it in absolute values, it turns out that Georgians, working abroad, transferred home that same amount as Moldavians – US$1.1 billion.

In Azerbaijan this correlation is even lower and totals less than 2%, though, Azeris, working abroad, also transfer much money home – in 2015 they transferred approximately US$1.2 billion. It is noteworthy that GDP level is high in Azerbaijan – it totals approximately US$63billion due to oil industry. The situation is the same in Turkmenistan and Uzbekistan, that are rich in oil and gas. Another type of dependence could be observed in these countries – oil and gas dependence, but it causes as many problems as the “transfer dependence.

As we have already noted, remittance inflow from abroad dropped in 2015 in the abovementioned countries. At present, these flows continuously decrease, first of all, due to an unfavorable economic situation in Russia.

According to Russia’s data, natural persons’ transfers to the CIS countries via the banking systems made approximately US$8 billion in 2015, as against US$18.3 billion in 2014.

This sharp drop has naturally caused plenty of problems for all; the countries with higher remittance dependence have faces particularly serious problems.

It is said that problems, themselves, do not to signify anything good. On the other hand, they provide opportunities, make one drive to certain conclusions, realize mistakes and correct them. The main conclusion is that serious structural changes are needed to consolidate the economic system and reduce dependence. What is actually required, is a true will and actions aimed at getting rid of a “transfer needle, rather than just “cosmetic changes.

If necessary measures are taken, the countries, that are facing problems today, will benefit in the course of time; they will create a stronger and more modern economic system. However, if the measures are fictive and just remain ink on paper, the dependence will grow and consequences will be similar to those that a drug addict, who refuses treatment, faces.