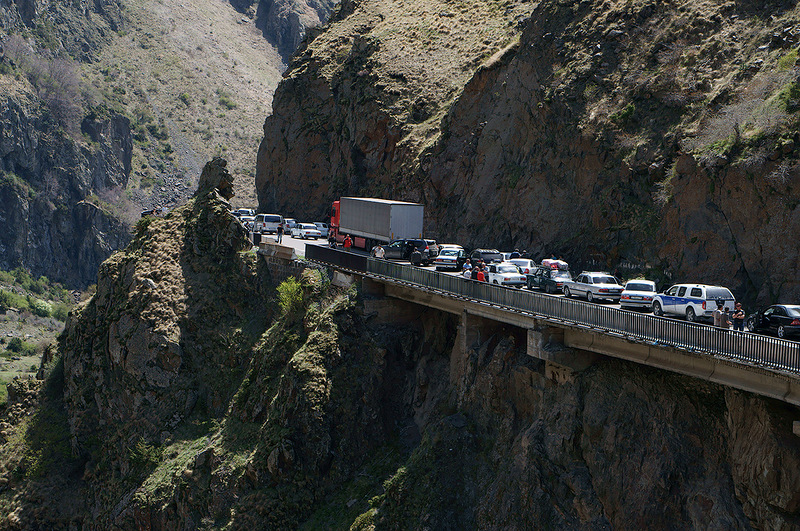 JAMnews spoke with a number of North and South Ossetia residents and compiled a profile of the Caucasia vehicle industry: what cars are preferred and where, how and from where do they come, what difficulties are there in registering a car and how drivers and ‘smugglers’ find shortcuts around these issues.

•How did Abkhazian resorts scare away Russian tourists?

One of JAMnews’ interviewees includes a former employee of the State Auto-Inspection of South Ossetia (SAISO) who, although he did not want his name released, agreed to talk about the details of the very lucrative vehicle industry.

The most popular modus operandi is to:

Step one: find a car

Car lovers in North and South Ossetia generally prefer brands from the USA and Japan. They acquire vehicles through middlemen who find a specific car for their client on special websites.

•Georgia will soon transition to an accumulative pension system: pros and cons

•Armenia’s fight against corruption: a JAMnews series on the first steps of the new Armenia

Then, a notarial contract is drawn up with the client regarding delivery of the car and the customer hands over the purchase sum and a certain percentage for its delivery, and the transaction is thus completed.

On average, 5 – 8 imported cars arrive daily in South Ossetia, and it is mostly used vehicles between 10 – 15 years old. These cars are brought in from all over the world, particularly Europe, North America and Japan. Lately, Japanese cars are in high demand.

“The reason for this popularity is the ratio of price and quality. In Japan, one can not only find a Japanese car for around 50-100 thousand roubles (about USD 800 – 1700), but also a good German car in good condition and with relatively little mileage,” said one interviewee to JAMnews.

Practically all orders (we did not come across any exceptions) enter Georgia through the port city of Poti on the Black Sea coast. These vehicles are then transported or driven across the border from Georgia to Russia via the Upper Lars checkpoint to Vladikavkaz. From there on it continues its journey into South Ossetia, and the transit process finishes at the border between Russia and South Ossetia, at the ‘Lower Zaramag’ point.

The services of a driver costs their clients about USD 1000.

The majority of cars that come into North Ossetia are then driven into South Ossetia in order to be registered locally since that it the cheapest option.

In Russia and other countries of the Customs Union, owners sometimes have to pay upwards of several millions of roubles in customs fees, but in South Ossetia the cost is only about 100 000 roubles or about USD 1700.

Subsequently the registered owner of the car can easily use it around his place of residence anywhere in the Russian Federation, including Moscow and Saint Petersburg.

“For example, 15 percent of light motor vehicles in North Ossetia are cars that are registered in South Ossetia,” an interviewee told JAMnews.

A lan* lives in Vladikavkaz, but has made use of the cheap customs clearance system in South Ossetia.

“It would have cost me about a million roubles in Russia (USD 17 000) to clear customs for my Mercedes-221. The more expensive the automobile, the higher the customs clearance fee. For example, if you buy a foreign car at a car dealer in Russia that costs 6 million roubles (USD 102 000), you then have to pay an additional 3 million (USD 51 000) in order to get customs clearance.

“It’s easier just to get a South Ossetian passport and pay the customs clearance, receive temporary permission and then in a year’s time re-register it.

“There is also the added bonus that if the automobile is registered in South Ossetia, it is free of transport tax in Russia, because it would be a foreign car in the territory of Russia.

“Moreover, if you break any driving laws, employees of the State Automobile inspection do not have the right to take away your license because the Republic of South Ossetia is a foreign state and the Russian State Automobile Inspection can’t touch you. They can fine you, but you have the right to pay the fine in the territory of South Ossetia, and fines as a rule aren’t payed there… .”

Alan is certain that if you know Georgia’s auto-market well, you can acquire a car yourself.

“The most important aspect is that you must have a reliable helper with a South Ossetian passport. You register the car in that persons’ name, you do all the documentation beforehand in Tskhinval and then get a technical passport and license plates. From there on you go to Georgia, you receive the car, drive it to Vladikavkaz, present your documents, and then you drive your car home to wherever you live in Russia,” he says.

According to Alan, the costs of the customs certificate and passport are no more than USD 300.

The former SAISO employee told JAMnews that friends and acquaintances often asked him for help ‘out of friendship’ with customs clearances.

For that reason, one shouldn’t be fooled by very expensive cars with South Ossetian license plates. They are not South Ossetians who have suddenly become rich; rather, they are representatives of North Ossetia, other republics of the North Caucasus or other regions of Russia.

This same interviewee said that there are a number of exclusive cars in the North Caucasus and in other parts of Russia that have South Ossetian number plates. For example, the only Lamborgini in Eastern Europe with a refined engine capacity of 2 000 horsepower is registered in South Ossetia.

*Names have been changed to protect the privacy of the individual/s.