How did Abkhazian resorts scare away Russian tourists?

It took less than a week for Abkhaz law enforcement to catch suspects in a case involving the robbery of two families of tourists from Russia, of which Moscow resident Andrey Kabanov died as a result .The investigation was taken under the personal supervision of the countries president, Raul Khajimba: but why?

The widespread discussion of the case hurt the image of the country and the tourism industry, which makes up 10% of the countries’ budgetary income.

The incident forced the authorities of the republic to examine other factors besides criminality that negatively affect the flow of tourists more closely: the activities of employees of the State Automobile Inspection service who target Russian tourists and the bad weather in 2017.

Novaya Gazeta asked JAMNews correspondent Dmitri Stateynov to look into the matter and to find out the opinions of both those engaged in the tourism sector and tourists themselves: what did they run into while vacationing in Abkhazia?

On 11 July, two unidentified individuals in masks, armed with firearms and knives, attacked a group of Moscow tourists relaxing on the beach by the mouth of the Aapsta river in the Gudauta region of Abkhazia.

The victims were two young families with four young children: the Kabanovs and the Chizhikovs. While trying to defend his family, Andrey Kabanov threw himself at the attackers, but received a stab to the chest. The muggers then demanded that the family give up their valuables and money. Nikolay Chizhikov said that he only had money on his card: the attackers sent him to withdraw money from the nearest ATM machine.

The children and women were taken hostage into the forest. Andrey Kabanov was left to bleed out on the beach. A local resident heard his cries for help and took him to the hospital where he later passed away.

Two days later, the police arrested the first attacker and later the second: the brothers Jinjolia. 29-year-old Adgur and 30-year-old Daur admitted to the entirety of their crime.

The Russian embassy in Abkhazia warned Russian citizens of the worsening criminal situation in the area and advised them to be on alert after the event.

Even in the first few days after the murder of Andrey Kabanov, tourists from Russia started choosing destinations other than Abkhazia and to cancel their reservations – admits president of the ‘Abkhaz Union of Tourism’ and owner of a tour agency, Anna Kalyagina. But, eventually, everything calmed down once again.

“The first two or three days, right when the news hit the Russian mass media, several hotels and tour agencies hit a difficult period of decline: tourists cancelled their reservations and tour packages. However, now there is demand once again. In our tour agency alone we had 20 cancellations – these were on average families with children. We tried to explain to them that this recent event, the murder of the tourist, was an almost unheard of event, one that hadn’t happened for many years. And that it was an exception to the rule. As a result, half of those that cancelled thought again and came to Abkhazia on vacation,” she says.

The owner of the Astanda hotel in Sukhum says that on the day of the murder, her guests began to pack their bags.

“I was barely able to convince them [to stay]. They for the most part calmed down, but I could see how they were waiting for the end of their vacation. Two others have cancelled their trips, while the rest, it seems, are still preparing to come,” she says.

Is Abkhazia dangerous? Officially, no.

If one judges by the official statistics published every holiday season by the Ministry of Internal Affairs of Abkhazia, then it would seem that law enforcement agencies are keeping everything under control. For example, from May to August of 2015, there were 343 crimes committed against visitors, the majority of which were theft and robbery. Of these cases, 43 were solved.

In 2016, there were only 66 reported crimes against visitors, 34 of which were solved.

Of course, in private conversations with residents and guests of Sukhum, one can often hear the opinion that Russian tourists are the victims of crime much more often than is reported by the official statistics: many of them simply don’t report the crimes to the police. Often times, this is petty theft on the streets, in cafes and on the beaches – wallets, bags, electronic devices. But recently, burglary has become a more frequent occurrence.

“In the middle of the day, two men tried to burst into my apartment. I heard that someone is fiddling around with the door. I went up to it, looked out through the peephole and saw two young men in hoods. I started to scream, and they left,” says one resident of St. Petersburg vacationing in Sukhum.

A local resident said: “My neighbor was robbed in the middle of the day. They took everything from the home that wasn’t furniture. They just opened the door when he wasn’t there, and took [it all] away.”

In neither case did the victims report the crimes.

“Last year, we had a woman staying in our apartment. They stole her bag out of her hands. They caught them, took them to the police station and the tourists wrote a statement. The next day, those same bandits were walking around our neighborhood. What’s the point of getting in touch with the police? They won’t punish anyone either way,” laments a Sukhum resident.

The problem is recognized by the Ministry of Internal Affairs: this year, the number of police on patrol was increased in places where many people tend to gather. The Press Service of the Ministry said that police employees patrol popular tourist routes, including the seaside and coast and the mouths of the rivers. It was at one of these locations that the above-mentioned murder took place.

Firearms and ammunition that have remained in the possession of the population from the Georgian-Abkhaz war of 1992-1992 are a part of the problem. They are practically impossible to account for, and are often used for criminal purposes. The Press Service of the Ministry of Internal Affairs says that there is an electronic database of registered weapons. But how many have been registered is not known. 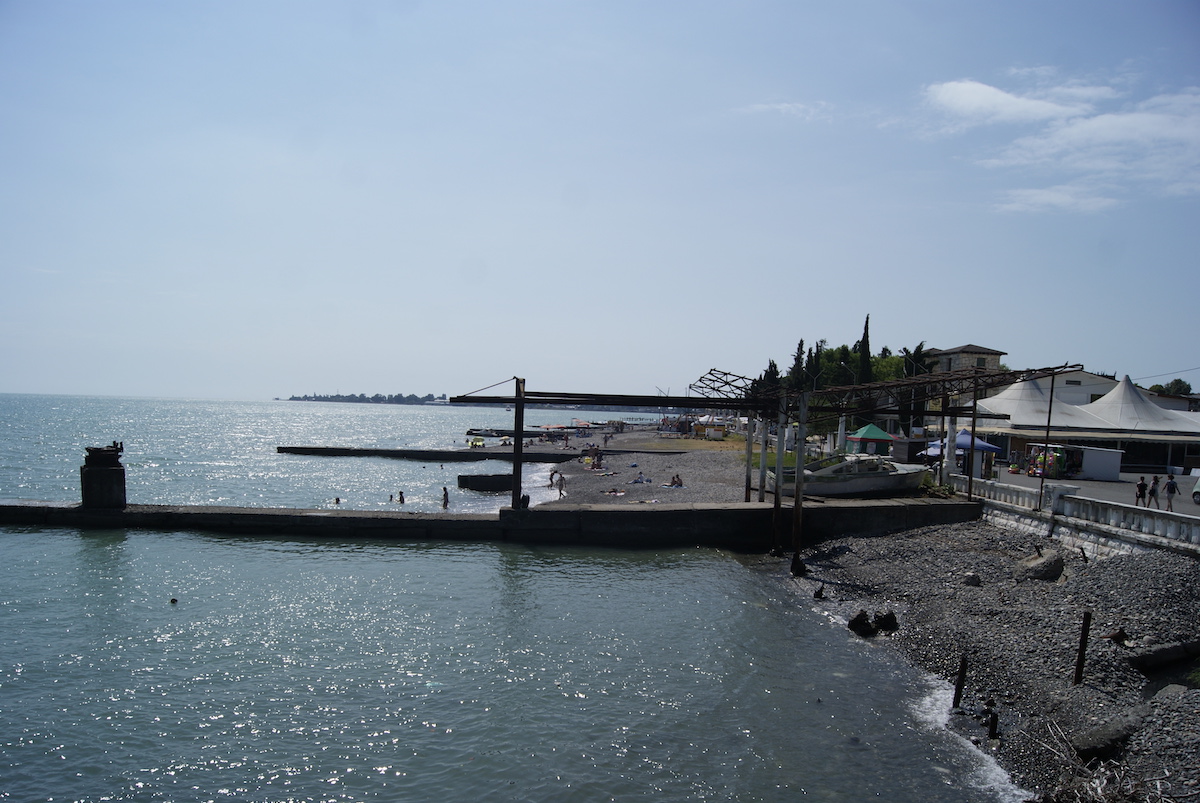 For Russian tourists, Abkhazia is easy to get to – Russians can enter the republic with their domestic passport. And the country, populated by 240 000 people, is most wanted for its warm sea.

According to data from Rosstat, in 2016 alone more than 4 million Russians visited. Interfaks says that it is the most popular foreign tourist destination for Russians. Rosstat includes all those who cross the border, and the Ministry of Tourism of Abkhazia counts tourists only as those that stay in hotels and in private housing. For that reason, Sukhum assessed the number of visitors at only 1.5 million last year. The last two years have beaten records repeatedly for the local tourism business. In 2016, official tourism services brought 2.57 billion roubles to Abkhazia – 8% of the country’s GDP.

In addition to direct tax deduction which hotel owners and home-renters pay, the republic receives an indirect income from visitors who come to buy products and other services. Of course, this money doesn’t enter into the tax system.

“Thanks to tourism, about 6 to 8 billion roubles flow into circulation, which remain in the hands of citizens and with which they then build hotels and restaurants,” says the Minister of Resorts and Tourism, Avtandil Gartskiya.

But in 2017, the trend changed, and not for the benefit of resorts in Abkhazia. In April, Gartskiya reported a decline in the amount of demand for hotels from Russians. Towards summer, the trend became all the more clear.

Hotel owners at a meeting of the Abkhaz Union of Tourism in Sukhum in the beginning of June reported that, despite a reduction in pricing by 20%, hotel occupancy had plummeted to 30% from 80%. Specialists noted the dilapidated infrastructure in cities and a deficit in service personnel as a reason for this. Managers of Abkhaz tour agencies have complained about the decrease in sales not only for tours and trips, but also for excursions. Russian tour operators reported then that the demand for trips to Abkhazia in the summer of 2017 had fallen by 15-20%.

Gartskiya believes that tourists were scared away by the bad weather and by negative information about Abkhazia.

“June this year was very rainy and the sea was cold. One very important factor which affects the flow of tourists and the tourism sector is information about the country. If you go to a country, you first study it, look at reviews, and any negative information and feedback which is transmitted by the mass media can often badly affect the situation. Often, this information is not checked first,” Gartskiya claimed in an interview with ‘Sputnik Abkhazia’.

Vehicle owners have something to add to the list. Many arrive in Abkhazia by car – from Moscow to Sukhum it is about a two day drive of 1800 km. However, local employees of the State Automobile Inspection (SAI) often pay special attention to Russian-plated cars. Because of the many complaints and statements from Russian citizens related to the wrongful actions of SAI employees, the Ministry of Internal Affairs released an order this summer, forbidding the SAI from stopping foreign vehicles outside of their zones of jurisdiction and demanding money from them. As a result, in June alone, about 60 employees offered their resignation from the state service.

Recently at a meeting, the President called the incident a shame and noted that if the SAI works against tourists, then they work against the state.

But that didn’t help.

“I saw the speech of the President,” says Rostov resident Kirill, “and I thought, now these guys will stop stopping us. But no, just a few days after a SAI employee stopped me outside of his zone of jurisdiction and said that I had crossed over a solid demarcating line in the road. I show him the place and say, no, there is no solid line. And he tried to think up some violation on the spot in order to get money from me. He let me go in the end, but the resentment is unpleasant. It’s obvious that they don’t care about the orders of the President and the Minister.”