On September 20, the Supreme Court in Abkhazia declared the decision of the Central Election Commission to recognise incumbent Raul Khajimba’s victory in the second round of the presidential election, which was held on September 8, as legal.

Thus, his rival in the election, opposition leader Alkhas Kvitsinia, has lost the lawsuit against the CEC demanding the election results be cancelled.

• All the details on the 2019 presidential elections in Abkhazia

However, Kvitsinia’s lawyer Inga Gabilaya stated that this decision would be appealed in 20 days.

Kvitsinia’s team is contesting the legality of the final decision on who won the presidential elections on September 8 made by the Central Election Commission.Raul Khajimba, who was elected to a second term, received 47.39% of the vote, while his opponent Alkhas Kvitsinia received 46.17%. The reason for the dispute is Article 19 of the Law “On the Election of the President of the Republic of Abkhazia”. It rather ambiguously describes the protocol by which the winner of a presidential election that goes to a second round is defined, and gives rise to different interpretations.

Three days before the second round of the elections in Abkhazia, after agreeing with the two election headquarters of both Kvitsinia and Khajimba, the Central Election Commission that decided whoever got the most votes would be elected president.

This is what Kvitsinia is now proresting. On September 11, he filed a lawsuit with the Supreme Court with a request to invalidate the decision of the Central Election Commission of September 9, 2019 on the election results.

During the day, the Supreme Court will consider the challenge of the composition of the court. This decision can only be made by the chairman.

The court session was held in a crowded room, journalists are actively monitoring the proceedings between the opposition and the Central Election Commission. The Supreme Court building was cordoned off by members of the Special Rapid Response Unit.

Two demonstrations are being held simultaneously to the court session in Sukhum – one for the opposition, the other for the government.

The first gathered in the city park “Skazakh”, near the office of the opposition party “Amtsakhara”, others – in front of a complex of government buildings. 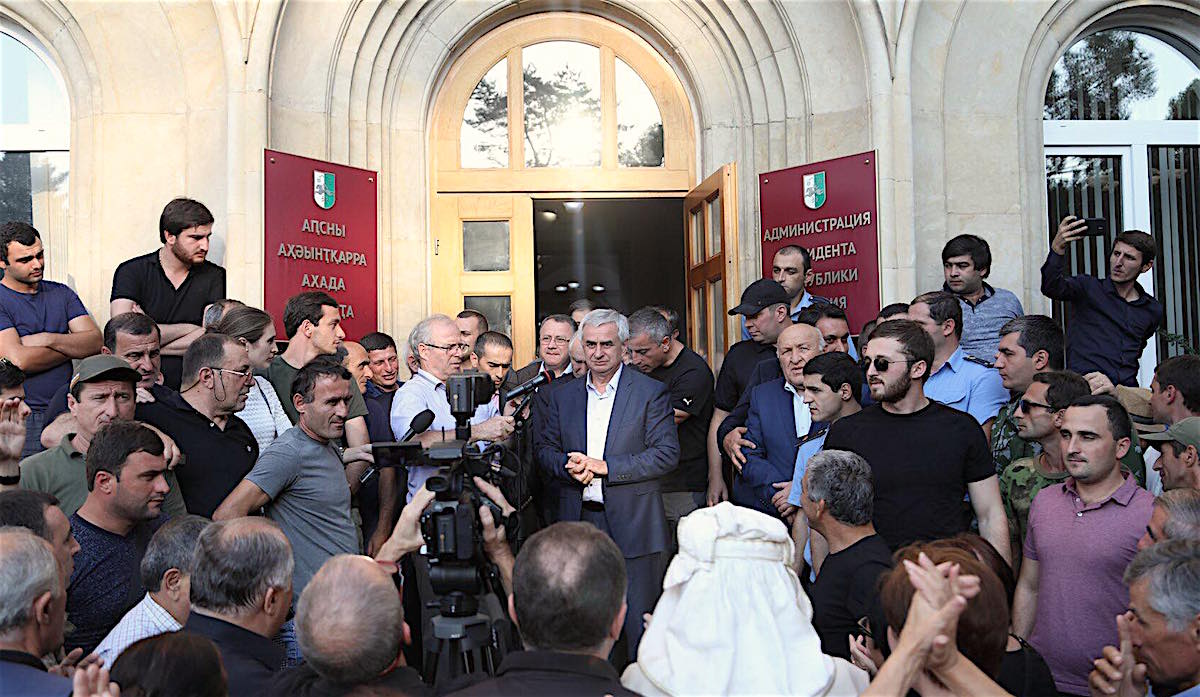 The lawsuit of opposition presidential candidate in the recent Abkhaz elections Alkhas Kvitsinia continued in the Supreme Court of Abkhazia on September 17 with a scandal.

The plaintiff’s lawyer Inga Gabelaia challenged the entire composition of the court at the beginning of the hearing, demanding it be reconstituted.

Gabelaia claims “from the very beginning, the court was formed with violations.”

Kvitsinia’s lawyer’s distrust of the court is connected with a previous story.

In turn, the Chief Justice of the Supreme Court included Oksana Pilia on the judge’s panel.

This is what the opposition is contesting.

“Firstly, the chairman of the court can change the composition only if the entire composition of the court considering the case is dismissed. Secondly, the decision of Judge Anri Bartsits to recuse himself was allowed by the President of the Supreme Court, and this contradicts the provision of the Administrative Procedure Code of the Republic of Abkhazia,” Inga Gabelaia told reporters.

Representatives of President Khajimba and representatives of the Central Election Commission, who stated that they see no reason to dismiss the composition of the court considering the claim of presidential candidate Aklhas Kvitsinia, did not agree with these charges.

The absence of grounds for challenging the composition of the court was also announced by a representative of the prosecutor general’s office, Elena Chitanava.