“You were silent when journalists were pressured on Russian television. Now there is no one to support you”

A year ago, Russian heavy truck drivers attempted for the first time to protest against governmental policy. The reason behind the protest was the decision to impose fares on federal routes for vehicles weighing more than 12 tons. Several hundred drivers decided to organize a “march of truckers to Moscow” in an effort to communicate to authorities about their plight.

However, the attempt to organize a large scale rally failed at the time. The participants were intimidated and driven back home.

A year later, at the end of March, the truck drivers had apparently managed to put their time to good use, as according to one of the leaders of the rally, Andrei Bazhutin, this time around over a million truck drivers are participating in a strike from all over Russia.

The protest in the North Caucasus turned out to be the largest and most resolute. Among the protesters are drivers from Dagestan, Kabardino-Balkaria, Karachay-Cherkessia, and North Ossetia.

In 2016 I happened to be among the Muscovites supplying protesters with water and diesel fuel in Moscow’s Khimki region. I spoke to them a lot. Just recently, in April 2017, I managed to visit the village of Karjin in North Ossetia, where over 100 truck drivers have set up a camp, and talked to them.

What has changed this year?

Economic demands remained the same. Truck drivers consider triple taxation unfair: the excise imposed in the price of fuel (about $ 0.6 per liter of diesel fuel), the annual transport tax (about $ 200), and now also the fare on federal routes (more than $ 0.05 per kilometer).

The greatest indignation is caused by the fact that the motorway fare is collected not by the state, but a private structure owned by Arkady Rotenberg, a close friend of Russian President Putin.

That’s news number one: simple-minded conviction that President Putin simply does not know what’s happening in the country, and we just need to tell him the whole truth – no more simple-mindedness.

News number two – they have realized that they will only be reckoned with if they show solidarity.

They should also keep holding on, maintaining a direct connection with Dagestan, Kabardino-Balkaria and Ingushetia, and attentively following the Internet for what’s happening in Ufa, St. Petersburg, Moscow and Voronezh.

Also, one should hear the words truckers shout to their colleagues who didn’t support the strike and swept past along the highway. “Rats!” Is probably the softest expression you would hear.

There have already been cases (not in Ossetia, but in Russia) of the strikebreakers getting their windshields smashed and cars burnt.

Trucks with foreign license plates-Georgian, Azerbaijani, Belarusian, Ukrainian – do not stir up such strong sentiments. The drivers, however, decide to move in rows, accompanied by police vehicles.

Thirdly, truckers have become much harsher. A year ago, they would gladly talk with anyone who approached them, but now they are much more suspicious, fearing provocateurs.

I, for example, got interrogated – who, where, why? The culmination of their questioning was whether I knew English or not. I said I knew a little. That was followed by the next question, not in English though, but in Ossetian. ‘What kind of spy you think I am,’ I wondered, ‘a policeman or an American?’ They burst out laughing finally, and invited me for shish kebab.

Fourthly, the last but not least circumstance in terms of importance. Striking drivers have begun to understand the meaning of solidarity.

They ask why doesn’t even a single television channel talks about them? There’s no such channel I respond. All those who could and would like to support you, have long been thrown out both from television and newspapers. On the other hand – when that was happening, did you support them somehow? You didn’t, right? They lower their eyes and say ‘yes, now we understand.’

But the most important thing is that the strikers have already managed to make themselves something to be reckoned with. The police and other law enforcement agencies try to stay away from them at a distance.

For example, head of North Ossetia Vyacheslav Bitarov came to negotiate with the Ossetian truckers. What was his offer? ‘Well,’ they say, ‘he tried to persuade us to conduct a round table, and also complained about Moscow, putting the blame on them, claiming his being helpless in that situation… He acted evasively, you know.’ ‘What about you?’ ‘Well, we have decided to stand our ground to the end.’ 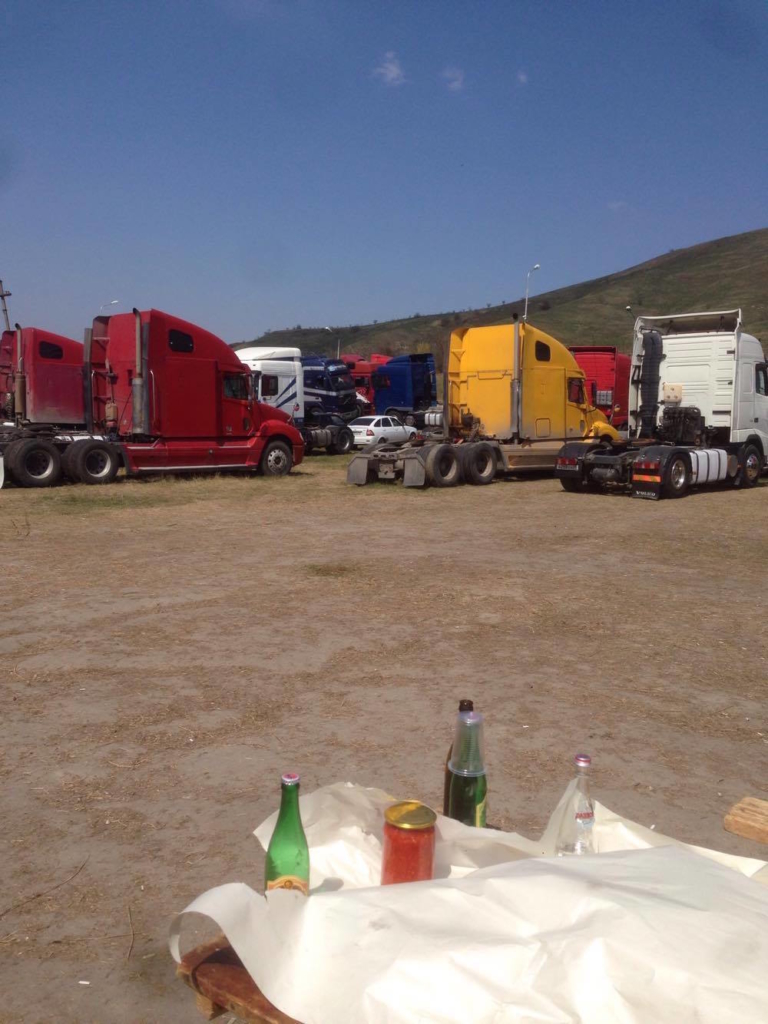