Wizz Air to operate direct flights from Kutaisi to London

Wizz Air, the low–cost airline, will be operating direct flights between Kutaisi and London (Luton). According to the United Airports of Georgia LLC, air flights will be launched from June 18 and will be conducted twice a week – on Thursdays and Sundays.

“In view of our interests in the region, we are going to further continue our fruitful cooperation with Kutaisi International Airport and will offer more interesting opportunities to Georgian passengers in future,” said Sorina Ratz, communications manager at Wizz Air.

Wizz Air has been performing flight from Georgia since 2012. In 2016, the airline provided services to 168,000 passengers in Georgia. 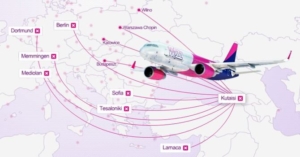