When will Azerbaijani oil end?

Oil accounts for about 60 per cent of Azerbaijan’s income. Economists, analysts and political scientists began to speculate on what would happen if the oil ends. Especially now, when the volume of oil production decreased by 20 per cent in the five years following the peak in 2010. Is Azerbaijan’s black gold really coming to an end?

Yanar Dag is a place not far from Baku where flames spew from the earth. The fire burns constantly as gas steadily seeps to it from the subsurface.

How it all started

It was known since ancient times that the land of Azerbaijan is literally ‘impregnated’ with oil and gas. In the 13th century, people scooped it up from wells with buckets. 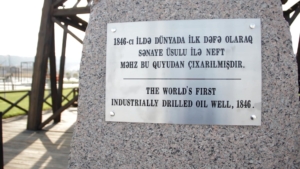 The territory of modern-day Azerbaijan was then part of the Russian Empire. The oil-bearing areas of land belonged not only to Azerbaijani entrepreneurs, but also Russian and Armenian entrepreneurs who rapidly became rich in the tide of the first oil boom. This is how the history of Azerbaijan’s oil begun.

What does the quantity of extracted oil depend on?

If we analyze the dynamics of oil production in Azerbaijan, it becomes clear that peaks and recessions are not so much due to the ‘mercy of nature’ as to the efforts that people make to find and extract oil. Though recessions are always due to some external factors.

At the beginning of the 20th century, oil production in Azerbaijan was small – 10 million tons, yet this was half of the world’s oil production. The decline in production in more than half is due to the First World War and the subsequent ‘troubled period’ when newly created Azerbaijan First Republic was in fact conquered by Soviet Russia.

The second peak period of oil production was in Soviet times – the 1930s – when the resources of the large country were allocated for the development of new fields, for geological exploration and for the extraction itself. Then, because of the Second World War, the volume of production again fell almost twice.

The third peak period occurred in 1970 when new offshore fields were opened in the Caspian Sea. Production reached 20 million tons, as during the previous peak. The next decline – up to 10 million tons – is associated with the collapse of the Soviet Union and the Karabakh conflict between Armenia and Azerbaijan.

The fourth peak of oil production – 2010 – more than 30 million tons of oil, or more than 50 million if one was to include gas condensate as the State Statistics Committee does. Such a high record became possible due to the ‘Contract of the Century’, which Azerbaijan had concluded with 12 major oil companies from 7 countries. They extract oil from three fields in the Caspian Sea. According to the contract, 731 million tons of oil is expected to be extracted until 2050.

Why did oil become less?

Ilham Shaban, the head of the Center for Petroleum Research, says that oil is in principle an irreplaceable resource. However, these pessimistic forecasts are often disproved by practice:

“In 1949, the ‘Oil Stones’ field, the first in the open sea, was discovered. In 1952 oil was already being extracted there through industrial methods. Back then it was believed that by 1979-1980 the resources of the Oil Stones field would be exhausted. But in 1980 the geologists made a different decision, and in 2000 this term was extended until 2015. In 2015 it turned out that the oil will be enough until 2035 in deeper layers of earth. Last year Oil Stones was still producing about 1 million tons per year.”

As Ilham Shaban says, there is always a so-called ‘geological reserve’ left in the wells, that is, oil which can not be extracted because of a complex geological structure. But once advanced technology is applied, the oil recoverability factor reaches 50%, like at Azeri-Chirag-Guneshli where BP and its partners work. For comparison, the Azerbaijani State Oil Company can only extract 28% of oil from wells in offshore fields: “Therefore, at Azeri-Chirag-Gunashli we can produce an extra 500 million tons of oil.”

One should not forget about gas condensate and about gas, which Azerbaijan sells too, the expert says.

On 14 September, SOCAR and BP (formerly British Petroleum), have extended their new contract for the Azeri-Chirag-Gunashli field until 2050.

From 2010 to 2016, the volume of annually produced oil in Azerbaijan decreased by 10 million tons. However, such a reduction had been foreseen in advance. The “Contract of the Century” refers only to the Azeri-Chirag-Gunashli field, and for an oil well it is natural that in time oil becomes less in quantity and harder to extract.

However, in addition to Azeri-Chirag-Gunashli, there are many fields that are not yet developed. For example, there is convincing evidence that there is a high probability of finding oil in the central part of Azerbaijan, where the so-called ‘Mugan Monocline‘ is located.

Azeri scientists have dedicated 30 years to its research, and this is not the only potential source of oil. In other words, the ‘oil apocalypse’ is not about to occur in Azerbaijan just yet, and the danger of decreased oil production can arise only because of insufficient investment in research and production. Not because the oil will ‘end’.

Coronavirus in the Caucasus. “Dagestan is in a very difficult situation, many have died” - appeal of MMA world champion Nurmagomedov