Ukrainian President visits Georgia for the first time in 9 years 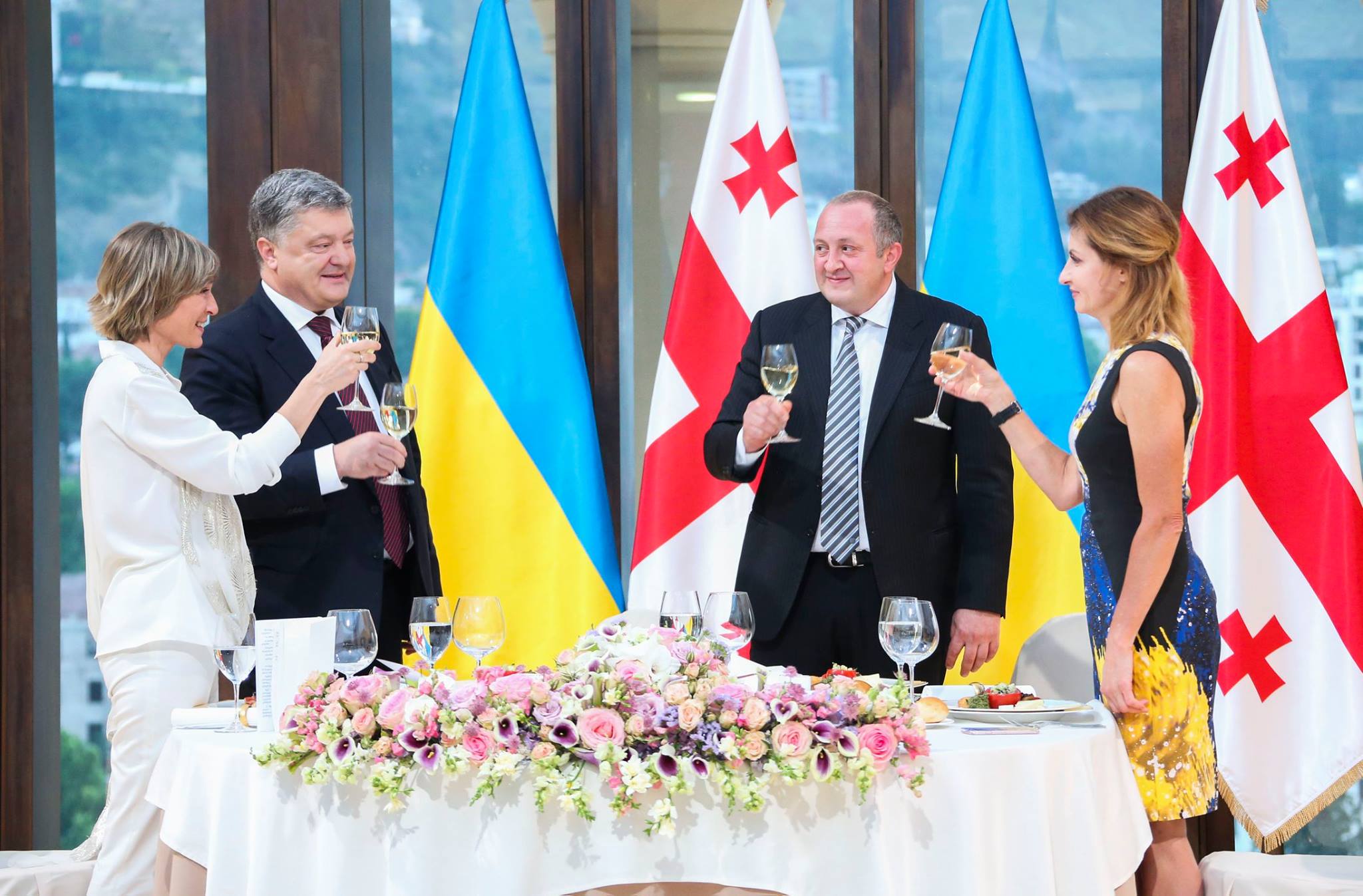 the Ukrainian President, Petro Poroshenko, has paid the first visit to Georgia after a 9-year interval.

The Ukrainian leader has been on a state visit to Georgia, which is ranked higher than an official one.

Although politicians and analysts have always stressed the need for close cooperation between the two nations, the Ukrainian President’s visit to Georgia turned out to have been impossible up until now. This is, first of all, attributed to ex-President Mikheil Saakashvili factor.

Petro Poroshenko arrived in Tbilisi on 17 July, accompanied by his family and government members. Neither the Georgian President, nor the Prime Minister greeted him at the airport. Instead, he was greeted by the Georgian Education Minister, Vice-Premier Alexander Jejelava.

The Ukrainian President will stay in Georgia for three days with his visit program being rather eventful. The streets in downtown Tbilisi have been decorated with Ukrainian national flags on the occasion of the visit.

The Presidents of Georgia and Ukraine signed a declaration on the establishment of a strategic partnership between the two countries. The document provides for setting up a joint, Georgia-Ukraine high-level strategic council, tasked to coordinate work on various issues.

As is pointed out in the declaration, the de-occupation of Ukraine and Georgia is a top priority and the two countries will take efforts and use all available political and legal levers, as well as mutual support in the bilateral and multilateral formats, to intensify pressure upon Russia and urge it to comply with the 12 August 2008 ceasefire agreement, as well as with its commitments under the Minsk Treaty.

The declaration also focuses on the Euro-integration process, underlying the need for well-coordinated activities in this regard. The document also includes provisions related to bilateral economic cooperation, namely: implementation of large-scale international transport and energy projects oriented towards Eurasia, including within the New Silk Road framework.

After signing the document, the Georgian and Ukrainian leaders held a joint news conference.

As both Presidents stressed at the news conference, Georgia and Ukraine are facing common challenges.

According to Petro Poroshenko, Ukraine views Georgia as a friend and partner, and Ukrainians have great trust in Georgians. He expressed gratitude to the Georgian soldiers who were killed in Ukraine. Later on, he laid a wreath at the memorial to those who fell in the struggle for Georgia’s territorial integrity.

“Our strategic partnership is caused by common challenges and threats. Only united can we overcome these threats. I am very grateful for this partnership, for the system of institutions and mechanisms of constant coordination of our actions, inter alia, in the sphere of defense and security,” stressed President Poroshenko.

“We, Georgia and Ukraine, are the nations that have proudly been carrying the flag of democracy and freedom for centuries; the nations that stand ready to struggle for this choice… we are facing absolutely similar challenges, that is de-occupation of our territories, sovereignty problems, restoration of Georgia’s territorial integrity in Abkhazia and South Ossetia, while in Ukraine it’s annexation of Crimea and Russia’s occupation of Ukraine’s east,” Margvelashvili stated.

There was an awkward moment during the news conference. Speaking about Russia’s occupation and aggression, President Poroshenko stated that it would be good if Georgia also had a document similar to the Minsk Treaty.

“The Minsk Treaty is a unique instrument. Regrettably, Georgia has no similar tool as a commitment signed by Russia,” the Ukrainian President stressed. Afterwards, the Georgian President carefully reminded his Ukrainian counterpart that there already was such an agreement. “In 2008, the Sarkozy-Medvedev 6-point agreement was signed, which provides for the ceasefire and withdrawal of Russian troops,” President Margvelashvili stated.

“It is noteworthy that the Eastern Partnership leaders – Moldova, Ukraine and Georgia, are facing a common challenge, which is Russia’s transgressing our territories. Therefore, it is important to coordinate our efforts, to support sanctions (against Russia) and develop a joint de-occupation strategy, so as to clear our countries from Russian troops.”

Apart from the official program, the Ukrainian leader was shown around Tbilisi and was offered a cable car ride to Mtatsminda park. During his 3-day visit, the Ukrainian President is also expected to visit different Georgian regions, including Ajara, Svaneti and the South Ossetian conflict area (in the vicinity of Russia’s occupied territories).

On 18 July, President Poroshenko and the Ukrainian governmental delegation also participated in a joint business-forum, which didn’t pass without an awkward incident either. The word ‘Ukraine’ on the forum’s central was misspelled.

Facebook users sharply criticized Georgian authorities for the aforesaid mistake, though no one has so far apologized or offered justification in this regard.

Ahead of President Poroshenko’s visit, there had been speculations in mass media that Saakashvili’s extradition issue would be in focus during the bilateral meetings. However, President Margvelashvili denied those speculations, saying he wasn’t going to discuss that issue with the Ukrainian leader.

In this regard, Petro Poroshenko’s response came as a real surprise. As he told Georgian journalists, he was unaware that the Georgian side was demanding Saakashvili’s extradition. In President Poroshenko’s words, he has been actively cooperating with the Georgian leadership, though the Ukrainian side hasn’t received any official request for Saakashvili’s extradition from Georgia. “Therefore, this issue isn’t on the agenda,” said the Ukrainian leader. The Georgian ex-President, Mikheil Saakashvili, has already responded to the Ukrainian leader’s ambiguous statement, suggesting that he should replace his legal advisers.

Later on, Poroshenko said that he checked the information, and that Ukraine had refused to extradite Saakashvili due to a lack of documentation and data.

Gela Dumbadze, Georgia’s newly appointed envoy to Ukraine, confirmed that the Georgian side had appealed to the Ukrainian authorities for Saakashvili’s extradition two years ago and that communication between the two countries’ law-enforcement agencies regarding the issue was underway.

Khatia Dekanoidze, a member of the United National Movement (UNM), who used to hold a high-ranking post in Ukraine for years, says that there is virtually no chance for Saakashvili’s extradition. “Saakashvili is a citizen of Ukraine. He cannot have his citizenship revoked because he isn’t a citizen of any other country. If Ukraine does that, it will have to pay a high political price,” Khatia Dekanoidze told JAMnews.

The Georgian Prime Minister, Giorgi Kvirikashvili, also admitted that the Saakashvili factor brought a certain inconvenience to the interrelations between the two countries.

In 2013, the Georgian Prosecutor’s Office instituted criminal proceedings against Saakashvili on a number of cases. Meanwhile, the Ukrainian leader accepted the Georgian ex-President to his team, with Saakashvili being granted Ukrainian citizenship. At first he was appointed as Poroshenko’s advisor, and later, the Governor of the Odessa region. Georgia appealed to the Ukrainian side on a number of occasions, requesting Saakashvili’s extradition, though its request was denied.

However, the situation has changed. Today, Saakashvili seems to be Petro Poroshenko’s political adversary. In 2016, following his scandalous resignation from the Odessa Governor’s post, Saakashvili set up the ‘New Forces Movement’ (Rukh Novyh Sil) opposition party. He is expected to stand in the next parliamentary election in Ukraine. Saakashvili blames Poroshenko and his team for protecting criminal clans and turning a blind eye to corruption.

Mikheil Saakashvili also made some comments on Petro Poroshenko’s visit to Georgia.

“I hope Poroshenko brought a towel and soap from Kyiv so as to avoid further complications,” Saakashvili stressed in his FB post, hinting to the criminal case launched against him in Georgia. (The matter concerns documents on Yuschenko’s ‘bath service’ costs, covered by the State Protection Service of Georgia. The documents were made public by the Georgian Dream leadership in 2013. The documents provided a detailed record of expenditures for soap, towels, bath shoes and tea with jam, which the Georgian Dream party regarded as inappropriate expenses – JAMnews).

Toponyms and terminology used in the publication, and views, opinions and strategies expressed in it do not necessarily reflect the views and opinions of JAMnews or any employees thereof. JAMnews reserves the right to delete comments it considers to be offensive, inflammatory, threatening, or otherwise unacceptable.