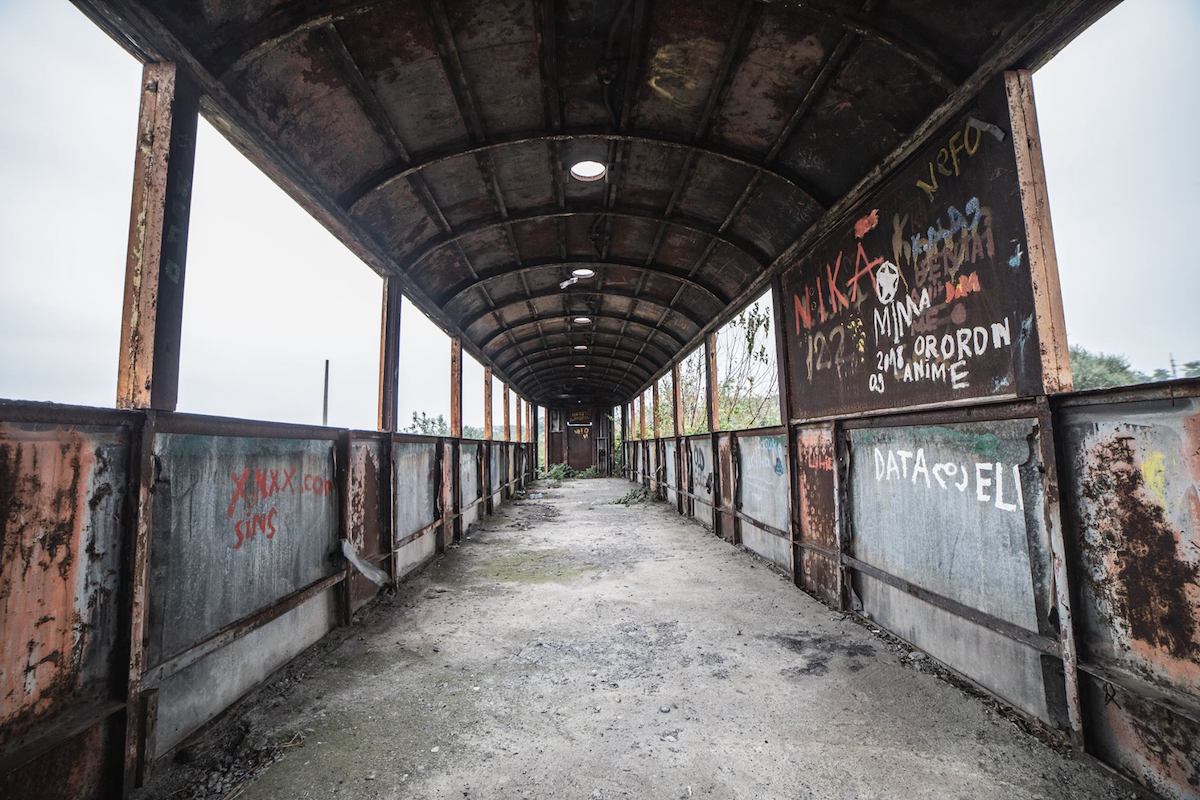 In early February, Rustavi was struck by a terrifying tragedy – a 29-year-old man killed his 13-year-old nephew with a knife.

The killer has been detained, and a medical examination concluded that he is suffering from a serious mentally illness.

The day before the murder was committed, however, the man was exhibiting extremely aggressive behaviour, and his relatives tried to have him hospitalised. However, not a single hospital agreed to admit him, and sent him home instead.

A few hours later he killed a 13-year-old child.

JAMnews tried to find out what happened in Rustavi and why there was no place in the system for a person with acute mental problems.

In Rustavi, in the courtyard of the seventh building of the eighth microdistrict, several colourful swings are moving in the wind. It’s quiet in the yard. Not even children’s voices are heard.

Residents of the building say that the yard is usually noisy and crowded with children, but for several weeks, since the murder of the 13-year-old by his uncle, it has been empty.

The 29-year-old uncle inflicted about 20 stab wounds to the child.

Medical examinations say that his mental illness was exacerbated by drug use.

A few hours before the murder, the relatives and friends of the patient turned to two medical institutions for help when they noticed he was becoming increasingly aggressive and agitated. But neither the psychiatric department nor the narcological department would admit him.

“There were many wounds inflicted to his back, chest, throat and heart.”

At about 9.30 am on 10 February, residents of the eighth microdistrict of Rustavi heard the cries of their neighbor, Giorgi Asanidze.

Asanidze was trying to get into an apartment on the first floor, shouting ‘open up!’.

Asanidze’s childhood friend stood on the other side of the door with a knife in his hands, and a 13-year-old child was with him.

Later, Asanidze told reporters that he heard the voice of the child calling for help. When the police forced their way into the apartment, however, he was already dead.

“There were many wounds inflicted to his back, chest, throat, and heart,” residents of the building say.

The 29-year-old man has already been charged. After his arrest, he was given a medical examination. Doctors believe that he needed compulsory treatment in a psychiatric hospital.

Friends of the accused say that in the two weeks in the run-up to the event, he was especially aggressive towards his wife and children and said that he “wanted to kill someone”.

Family members and friends turned first to the Rustavi Clinic. It was on 9 February in the middle of the day, the day before the child was killed. He was brought to Rustavi Clinic by ambulance.

The acting director of the clinic, Luka Salukvadze, showed us the killer’s medical records:

“He complained of dizziness, headaches, general weakness, nausea and insomnia. According to the patient himself and his wife, he was under the influence of marijuana, after which he felt worse. He also complained about occasional anxiety, irritability, insomnia, and a loss of appetite,” his case history reports.

Khatuna Revazishvili, the head of the emergency department, said that the family members did not mention his aggression towards his wife and children. According to her, the patient was given appropriate assistance, he recovered and was discharged four hours later.

His friends who were with him that day remember the events otherwise:

“The clinic told us that he needed to be put in a psychiatric hospital,” recalls Giorgi Asanidze.

This is confirmed by clinic doctor Luka Salukvadze.

He says that the patient’s relatives were recommended to take him to a psychiatric clinic in Tbilisi. Salukvadze says that according to the law, the Rustavi Clinic could not do anything other than “assume the existence of a mental illness” and recommended the appropriate course of action to his relatives, since the clinic is a general medical institution, and does not have a license to assist the mentally ill.

The man, still under the influence of drugs, was taken from Rustavi to the Centre for Mental Health and Drug Prevention located on Kavtaradze Street in Tbilisi. It is one of the largest centres in the city where mentally ill people are assisted in one department and drug addicts in the other.

However, the patient was not institutionalized in Tbilisi either.

The head of the centre, Lasha Kiladze, says patients are not forcibly treated in the narcological department, since this is prohibited by law.

“His friends wanted him to be treated in the drug treatment hospital, but he himself refused treatment,” Kiladze told reporters.

Kaladze noted that the narcology department recommended that they go to the psychiatric department. But the patient refused, says Kiladze.

Those close to the defendant say that he was indeed taken first to the drug treatment ward, but, having been refused admission, was immediately transferred to the psychiatric ward:

“We visited the psychiatric ward. They took him inside for only two minutes … The doctors talked to his wife. Then they said that there were no places in the department,” recalls the friend of the accused, Giorgi Asanidze.

He says that after the psychiatric department, they again appealed for substance abuse treatment:

“A security officer came out and showed us an application. He said that three thousand GEL is needed for the application,” says Giorgi, who stated that they promised the clinic management that the funds would be brought the next day, but the doctors would not relent.

A call at three in the morning

Just a few hours before the ill-fated morning, the 29-year-old man called a relative:

“It was about three in the morning when he called his uncle and asked to be taken to the hospital … asked to promise him that at the very least on Monday they would put him in the hospital to start treatment. He asked for help, but no one actually paid attention,” says Giorgi Asanidze.

Were the doctors obligated to do more? There is no definite answer to this question because of the way the psychiatric system functions.

The main finding of this case is that the psychiatric system in the country is not sufficiently coordinated with the single healthcare system, and the clinics work somewhat independently among themselves.

Thus, general doctors feel they are not responsible for a patient with mental problems.

“When he was brought to the general hospital in Rustavi … the system should have been capable of dealing with him, providing him with help, placing him in the right institution and not simply leave him in the care of his friends,” says Manana Sharashidze, psychiatrist and head of the Georgian Association for Mental Health.

The chairman of the Society of Psychiatrists, Eka Chkonia, agrees that the search for a place in medical institutions should not be handled by the patient’s family members or his friends. In her opinion, the main problem is the lack of  internal and external coordination of medical institutions.

Another issue in the system that the Rustavi incident unveiled is the far-from-perfect drug legislation in the country.

Unlike psychiatric patients, the treatment of drug-addicted patients is exclusively voluntary – it is forbidden by law to forcibly treat them. There are no exceptions. It is this argument that is used at the Centre for Mental Health and Addiction to justify why a person who was in a serious condition was turned away.

The head of the Georgian Association for Mental Health, Manana Sharashidze, says that this law should be amended:

“For example, a person experiencing psychosis brought on by the use of a psychotropic substance fully meets the criteria of a socially dangerous person [and should be hospitalized]. But there’s nothing to do, because the law does not obligate medical institutions to carry out mandatory treatment. This provision of the law urgently needs to be corrected,” she says.

Problem 3: There are no psychiatric departments in multidisciplinary clinics.

Psychologist Jana Javakhishvili points out another problem: it is necessary to have psychiatric departments in all multidisciplinary clinics – not only in specialized ones, so that it would be possible to provide prompt assistance to patients experiencing psychosis.

“It does not matter whether a person or a chronically ill person with an acute episode is under the influence of any substances. This person needs critical assistance. And there should be the possibility of providing assistance in ordinary multidisciplinary clinics where surgical, neurological, cardiological, and other departments function. Along with them, there should be an acute psychiatry department,” says Javakhishvili.

Until 2017, this was the case. Two years ago, after the adoption of legislative amendments, the financing of three large private clinics participating in government programmes which had consulting rooms for patients with acute mental problems were cut: Gudushauri Clinic, Clinical Hospital No. 5 and the referral hospital.

Experts say the amendments were misguided: the number of places for patients with acute mental illness has decreased, and the hospitalization of such patients has become more complicated.

The Centre for Mental Health and Drug Prevention denies that the patient from Rustavi was not hospitalized in the psychiatric ward due to the unavailability of  beds.

However, the information that there were no free beds at the Centre on 10 February has been confirmed by the Ombudsman.

For many years, a shortage of beds has been a problem for the psychiatric institutions of Georgia which has never been resolved. Experts explain the congestion of hospitals with two reasons: the inappropriate distribution of finances and failures in the provision of specialized services.

Problems in the field of psychiatry differ from each other in severity. Some patients require inpatient treatment, while some require other services. These “other” services are a serious problem in Georgia. Therefore, in some hospitals, one can often find a patient who should not be there, thus occupying a bed that should be available for patients with acute problems.

At the moment, the psychiatric hospitals in Georgia have around 1,400 beds available in total. For each of them, the state allocates 19 lari [about $7] per day.

“If we hospitalize everyone that needs help, the expenses would be such that the system simply couldn’t support it,” says Eka Chkonia.

Chkonia says the solution to the problem is the development of alternative, cheaper services for patients with mild forms of mental disease.

* While working on this article, the author contacted the Ministry of Health several times for a comment. However, none was received.