Tbilisi again has been swept up by a new wave of protest; thousands of people gathered near the parliament building on the evening of 15 November.

Their main requirement is early parliamentary elections. Tents have been set up on Rustaveli Avenue.

The extent of unison between opposition parties against the current authorities has not been seen since 2012.

Thousands of people came out in protest against the parliament’s decision not to hold the 2020 elections per a proportional system (on party lists). Had the bill passed, the majoritarian system, which traditionally has given the ruling party a significant advantage, would have been abolished.

The transition to a proportional system was one of the main requirements of protests in the summer. On June 24, after two days of rallies, the leader of the Georgian Dream Bidzina Ivanishvili made a public statement agreeing to fulfill the demand.

He said that Georgian Dream would agree to a proportional system and would present such a bill to parliament.

However, when this issue was put to a vote in parliament, many MPs from this party did not vote for the changes initiated by the Georgian Dream.

In conditions when no important political decision is made without the participation of the informal leader of the country, the head of the ruling party and oligarch Bidzina Ivanishvili, few believe that the legislators who vetoed the bill acted independently.

Opposition MPs call what happened in parliament “a performance and trick staged by Ivanishvili.”

“It was the scam of the century, the Georgian people have never been cheated like this before,” said one of the organizers of the rally, Shota Digmelashvili.

After the vote, Rustaveli Avenue was blocked by civil activists who held rallies in the summer.

They sat on the roadway and urged everyone to gather outside the parliament building.

By seven o’clock in the evening the number of protesters increased to the extent that Rustaveli Avenue was blocked off.

Students from various universities also joined in the protests, carrying banners with the words in Georgian for “shame” and “Ivanishvili is a liar.”

At seven o’clock in the office of the Labor Party there was also a meeting of leaders of opposition parties and civic activists.

The meeting was attended by representatives of all opposition parties, including those radically opposing each other – leaders of pro-Russian parties sat next to pro-Western politicians.

“All minus one” is the main formula around which political parties have united. 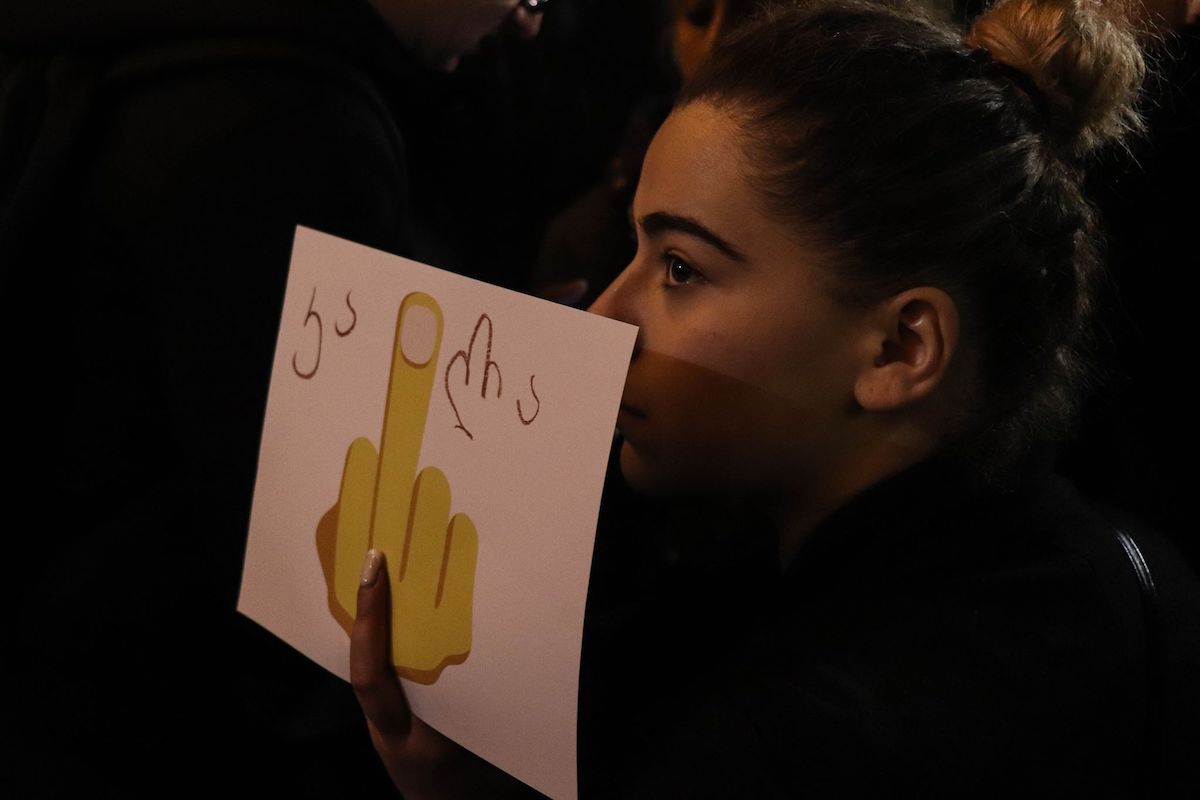 The opposition agreed on a single plan of action. The solution is as follows: the campaign on Rustaveli Avenue will not end until early elections are scheduled, which will be held in full according to a proportional system.

The three main demands of the opposition

“All opposition forces are united in the fact that Bidzina Ivanishvili has brought the country to the edge of the abyss, so we need joint action to end this hostile regime, not a single word of which is worth anything.

“The country needs early,  proportional, elections, which will be held by the transitional government. We will do our best to achieve this goal,” said Giga Bokeria, leader of the European Georgia party after the opposition meeting.

“If you are sitting at home, go out into the street because there is nothing left of the state, and whatever is left is also being taken away. Tell me, will you give the state to the oligarch? Go outside, what are you doing at home at this time? No matter what system the elections are held in, I’ll tell you in Tbilisi, we’ll tear them apart,” said Grigol Vashadze, one of the leaders of the opposition United National Movement

He noted that the Unified National Movement advocated for more radical measures, although a consensus has been reached with the opposition and the party will follow the general agreement.

“The only mechanism that the current government understands is mass protests … We had to try to unite all the opposition parties, and Bidzina Ivanishvili succeeded,” said Nino Burjanadze, chairman of the Democratic Movement – United Georgia party.

“Bidzina Ivanishvili did everything to get barricades on Rustaveli”, said Bachuki Kardava, chairman of the National Democratic Party.

“Bidzina Ivanishvili, one of the most deceitful people I have encountered in my life, has staged a play with my party and changed the direction of Georgia’s national interests in the north. The cup of patience has overflowed, we will not back down,” businessman Mamuka Khazaradze, the founder of new political movement Lelo, declared his support for the rally.

The third president, Mikhail Saakashvili, who is now in Ukraine, also reacted to what is happening in Georgia.

“One thing I know: the feast of St. Giorgi is coming up on November 23, and the Georgian people should unite and conduct a peaceful mobilization. This regime no longer has any legitimacy. So now everything depends on us. Strength in unity, friends, I’m sure that we will succeed,” Saakashvili said in a video posted on social media.

“I stand where the Georgian people stand, and where there is no alternative,” said the fourth president of the country.

The US Embassy also issued a statement today on the decision of Parliament.

“We regret that, despite the support of the opposition parties, the constitutional amendments at today’s vote were supported by an insufficient number of deputies of the Georgian Dream.

“We urge all parties, including the government, opposition parties and civil society, to cooperate calmly and with dignity in order to continue moving forward in accordance with our common obligations to strengthen the democratic development of Georgia,” the statement said.

How a superhuman was created: legends surrounding the inhabitants of the Sukhum/i monkey nursery