Field work was carried out from September 11 to October 14, 2019. This is the first study conducted since the protests in the summer of 2019. During the study, 1,500 people were interviewed.

What party would you vote for?

When asked which party respondents would vote for if the elections were held tomorrow, only 23% named the ruling Georgian Dream party. Opposition parties in total would have gained almost twice as many votes: 41%.

The United National Movement of ex-President Mikheil Saakashvili has the highest rating among opposition parties at 15%.

Judging by the ratings, pro-Russian parties in total could only expect to get 6% of the vote. 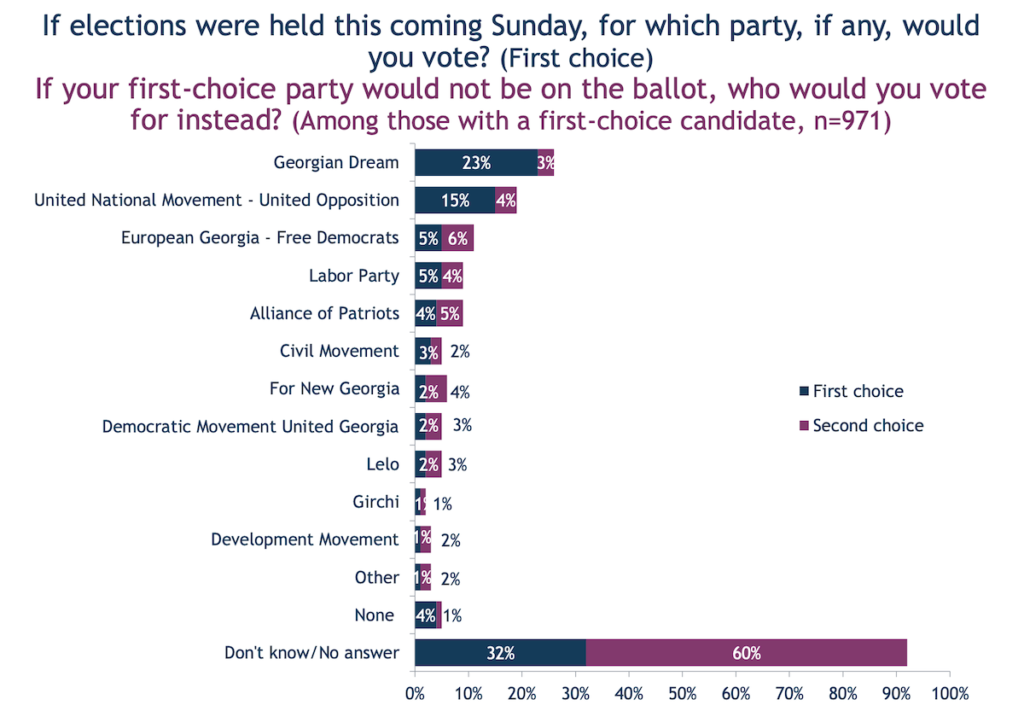 Most loved and hated politicians

President of Georgia Salome Zurabishvili, elected exactly a year ago, was negatively assessed by 70% of the population.

Bidzina Ivanishvili is the informal ruler of Georgia; 57% of the population does not like the person who makes all important government decisions.

Tbilisi Mayor Kakha Kaladze is the highest-rated politician in the ruling Georgian Dream. 49% of the population has a positive attitude towards him.

The reliable leader in the ranking of political sympathies is the chairman of European Georgia David Bakradze. 57% of respondents rate his activities positively.

The least love among the opposition is enjoyed by Irma Inashvili and Nino Burjanadze. Both have a reputation of being pro-Russian politicians and opponents of joining NATO. They cause a negative attitude in 58-59% of respondents.

Giorgi Gakharia, who took the post of prime minister of the country a few days before the survey is assessed by 39% of those surveyed as positive, and 59% – negatively. 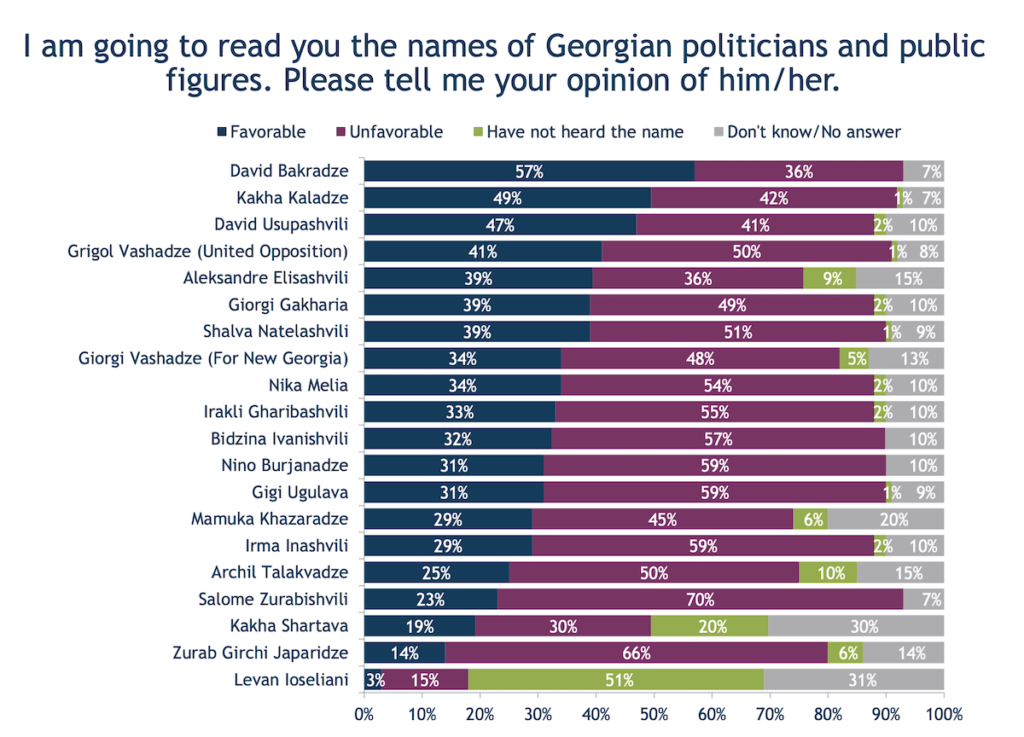 Rating of trust in institutions

The most respondents rated the Georgian army as a trustworthy institution at 86%. It is noteworthy that for many years the church was in the lead in this ranking. This time, it came in second. Its activities were rated positively by 85%. Back in April, this figure was 89%.

It is necessary to mention that this survey was conducted before the scandals that erupted in the walls of the church recently (accusations of priests in homosexuality and pedophilia).

In third place in the rating of trust is the media.

The courts were in the penultimate place, and the presidential apparatus took fourth place from the end. 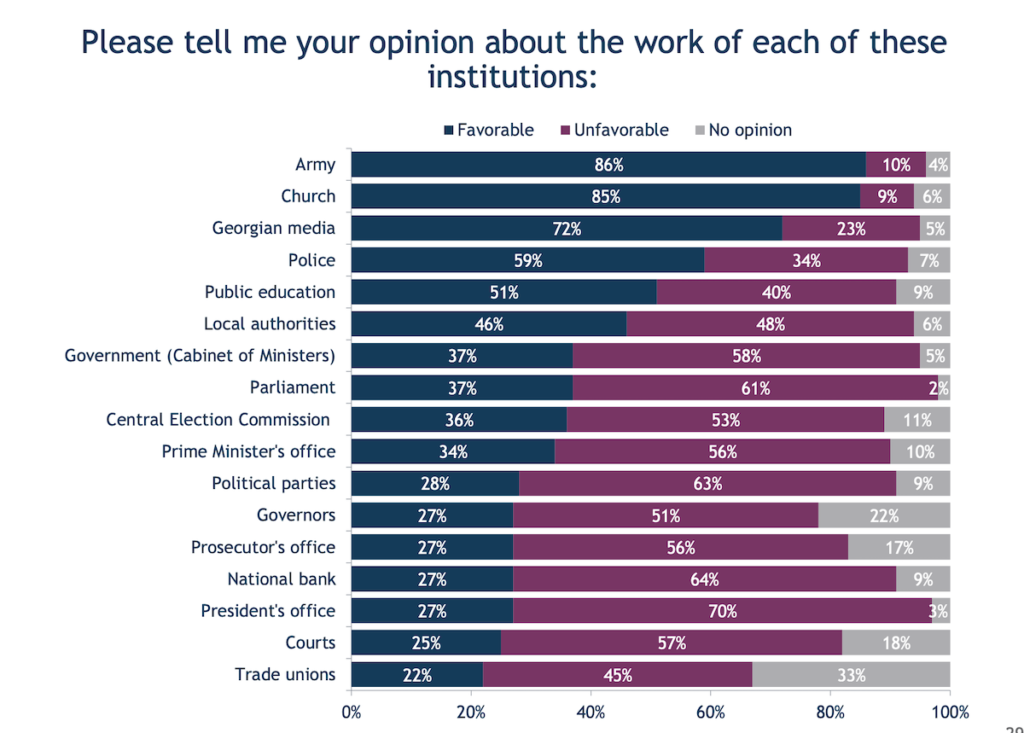 When asked which of the countries is Georgia’s most important political partner, the majority, 52%, said the United States.

In second place is the European Union with 50%. Ukraine is also considered a strong political partner with 32%.

The most important economic partner was named as the European Union by 37% of respondents, and 33% named the United States.

Russia has become the absolute leader in political (83%) and economic (72%) threats. 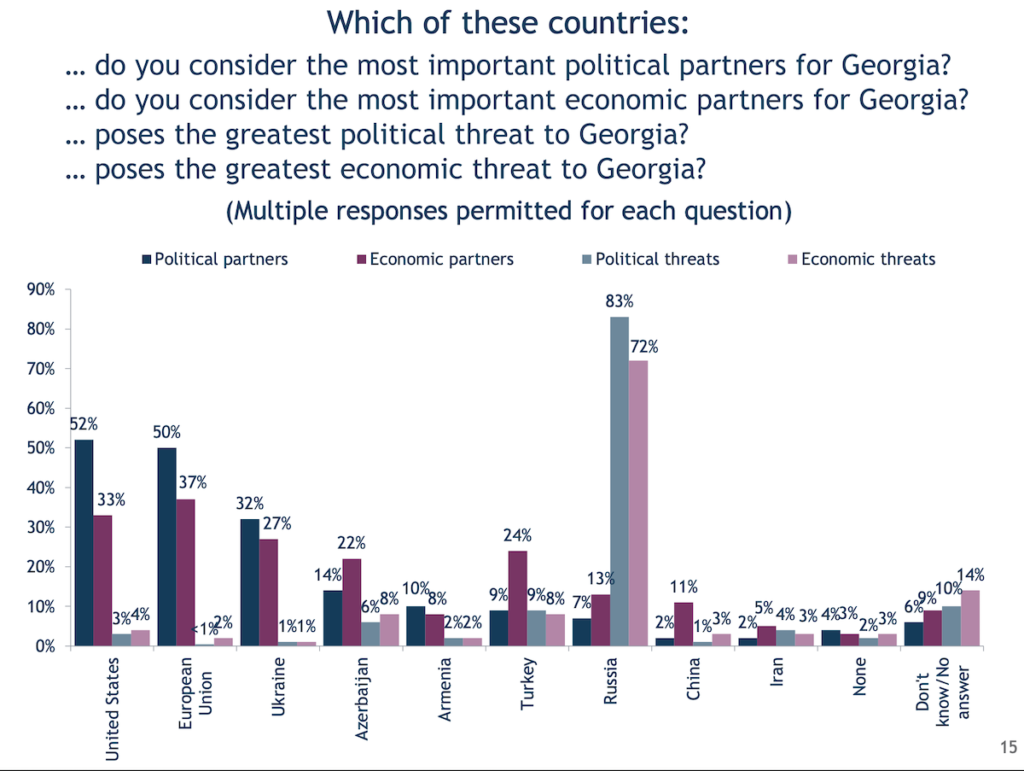 80% of the population supports the idea of Georgia joining the EU (71%) and NATO (80%). Georgian citizens expect more economic benefits from the European Union, and security from NATO.

• 68% of respondents believe that it is better for Georgian democracy if there are more parties in power.

• 66% of the population believes that the economic situation in Georgia has deteriorated significantly over the past year.

• When asked what the achievement of the current authorities is the most noticeable 21% of respondents said “none.” 13% consider the health program to be the main achievement.

• The majority of the respondents (12%) named unfulfilled promises as the main failure of the authorities. It should be noted that the survey was conducted before the Georgian Dream did not fulfill the promise of switching to a proportional electoral system. In the list of other ‘party’ failures, in second place comes the depreciation of the national currency GEL, and the third – the events of June 20 (the unrest provoked by the speech of the State Duma deputy Sergei Gavrilov in the Georgian parliament and the suppression of these statements by the authorities).

• A large part of the population is indifferent to political processes. 77% said they never or very rarely talk on political topics with relatives or close friends.

• The main problem that the mayor of Tbilisi, Kakha Kaladze, must solve, the majority of respondents said, was the environment (23%). This is also a characteristic feature of this study, since environmental problems in the first three were quite rare.