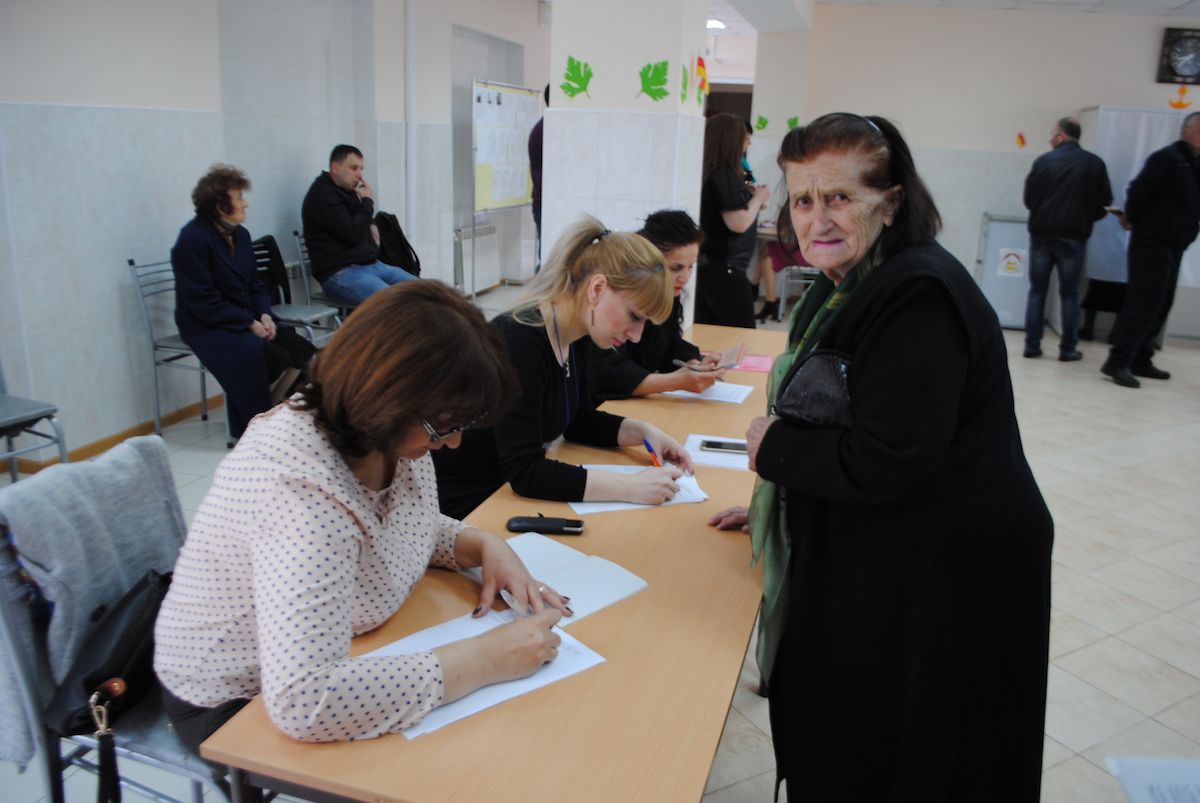 On 9 April 2017, citizens of South Ossetia decided on how many presidents they will have – either increase it to five, or keep the number at four. Since its declaration of independence in 1992, the office of president has been consecutively held by Torez Kulumbegov, Ludwig Chibirov, Eduard Kokoity and the incumbent president Leonid Tibilov, who decided to stay in office for a second term.

That decision was to be either rejected or supported by more than five thousand votes in South Ossetia, Moscow, Abkhazia and North Ossetia. Chairman of the Ossetian Parliament Anatoly Bibilov and local KGB officer Alan Gagloev proposed their candidacies as an alternative to Leonid Tibilov.

Judging by external indications, the election of the President of South Ossetia has been met with great indifference in North Ossetia. The main printed outlet of the republic, the newspaper “North Ossetia”, informed its readers two days before the event about various important events, judging by the headlines on the front page:

” Two viewpoints from one route-taxi van”

“Do we need sports aviation?”

It was only possible to learn about South Ossetia choosing its president from the “day after day” section that made notice in small font that the republic would have observers from Russia, as well as the Republic of Donetsk and Luhansk, Transnistria and Nagorno Karabakh.

In terms of the abundance of materials dedicated to the upcoming South Ossetian elections, the television and websites of North Ossetia were similar to the printed newspaper.

The streets of Vladikavkaz have confirmed that the event left residents of the city quite indifferent. The number of posters of outdoor advertising and leaflets glued to fences stood at zero. 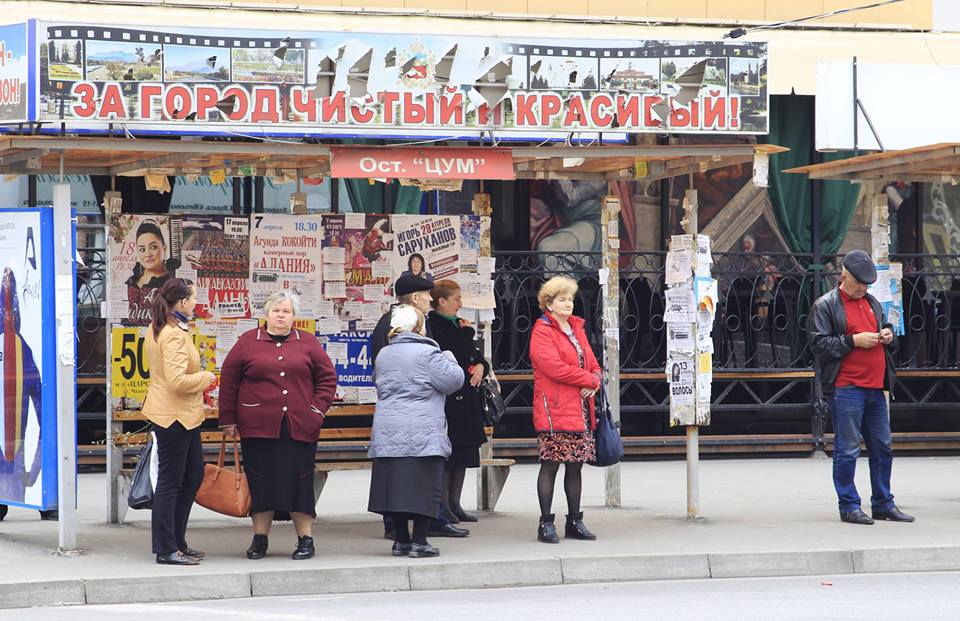 Judging by the conversations in streets, markets and transport in Vladikavkaz, local residents are concerned about many issues, but the elections in South Ossetia is not among them. For example:

– Final school exams are drawing near, and so do the entrance exams in universities and colleges. That means expenses on big bribes.

-It’s not entirely clear how to get money for bribes in generally poor employment conditions in North Ossetia, which have currently turned disastrous (due to Moscow’s policy that has undermined the principal business- manufacturing of vodka).

– Heavy truck drivers that supply the entire North Caucasus, including North Ossetia, are currently on strike. Therefore, the chances are high that store shelves will soon become empty.

– The only major industrial enterprise providing both jobs and revenues for the republican budget – the Electrozinc plant – has simultaneously become a mortal threat: the number of oncology diseases has dramatically increased in the republic.

Therefore, the attitude of Vladikavkaz citizens for all the issues of the world, including South Ossetia- a cousin state, is reflected in the inscription on the wall, obviously made by young people– “Fuck the world”. 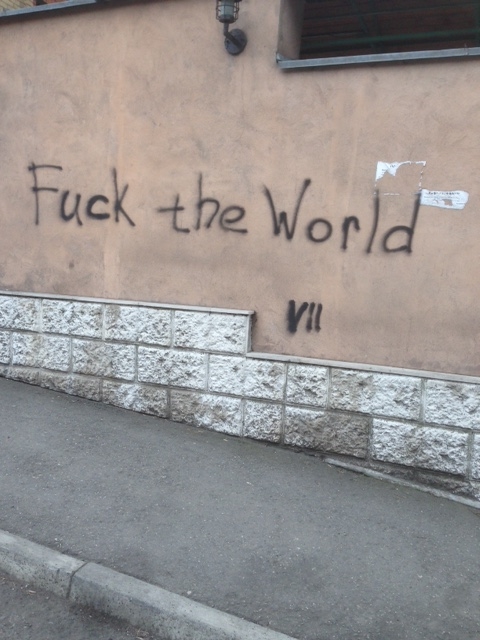 It seems that the headquarters of the contenders for the presidency of South Ossetia took into account all these circumstances and decided to act differently. They conducted campaigning the old fashion way – through mail boxes. The only exception was the pre-election campaign of outsider Alan Gagloev. His headquarters in Vladikavkaz opted for an innovative way and had young people inviting casual visitors to join their party. 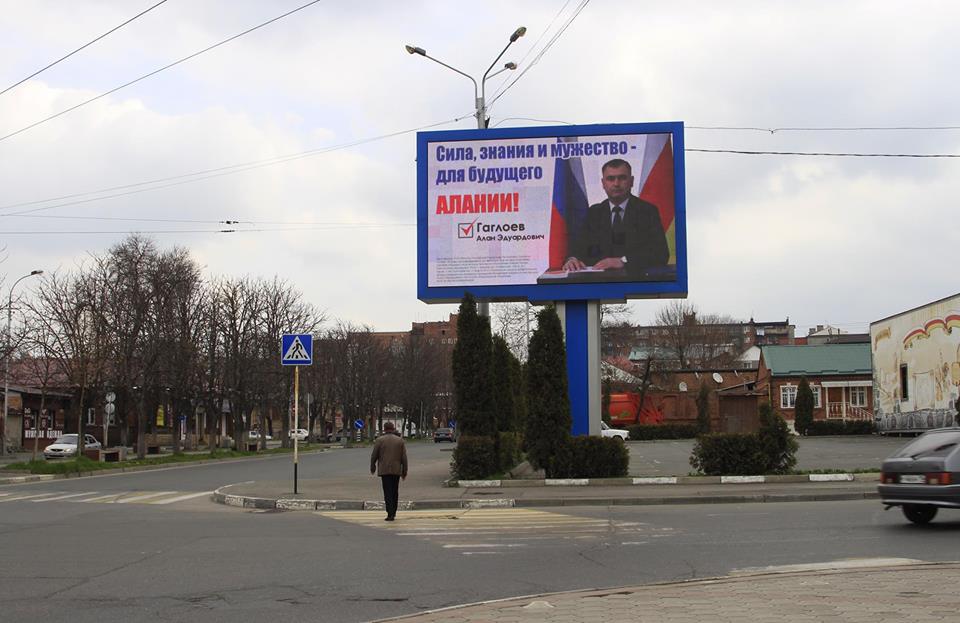 The editorial office of JAMnews got leaflets distributed by the leaders of the pre-election competition – Leonid Tibilov and Anatoly Bibilov:

The slogan of the incumbent South Ossetian President reads “stability and development.” The main idea behind his campaigning materials suggests that the “number of thefts has reduced during my presidency!” His arguments are rather unspecific: “…works are in progress…”, “…the concept has been adopted…”, “…an apple orchard has been planted…” However, when it’s necessary to declare concrete figures, the situation remains just as vague. For instance, how are you supposed to understand a phrase like “around 16-18 obstetrics centers have been opened” – is it 16 or 18?

The Chairman of the Parliament suggests a bolder position: “You can steal even less!”

Also, a few hundred award pistols were handed out by the president of South Ossetia (it seems that this is the largest award firearm fund in the world), which were later used in criminal showdowns in Russia. 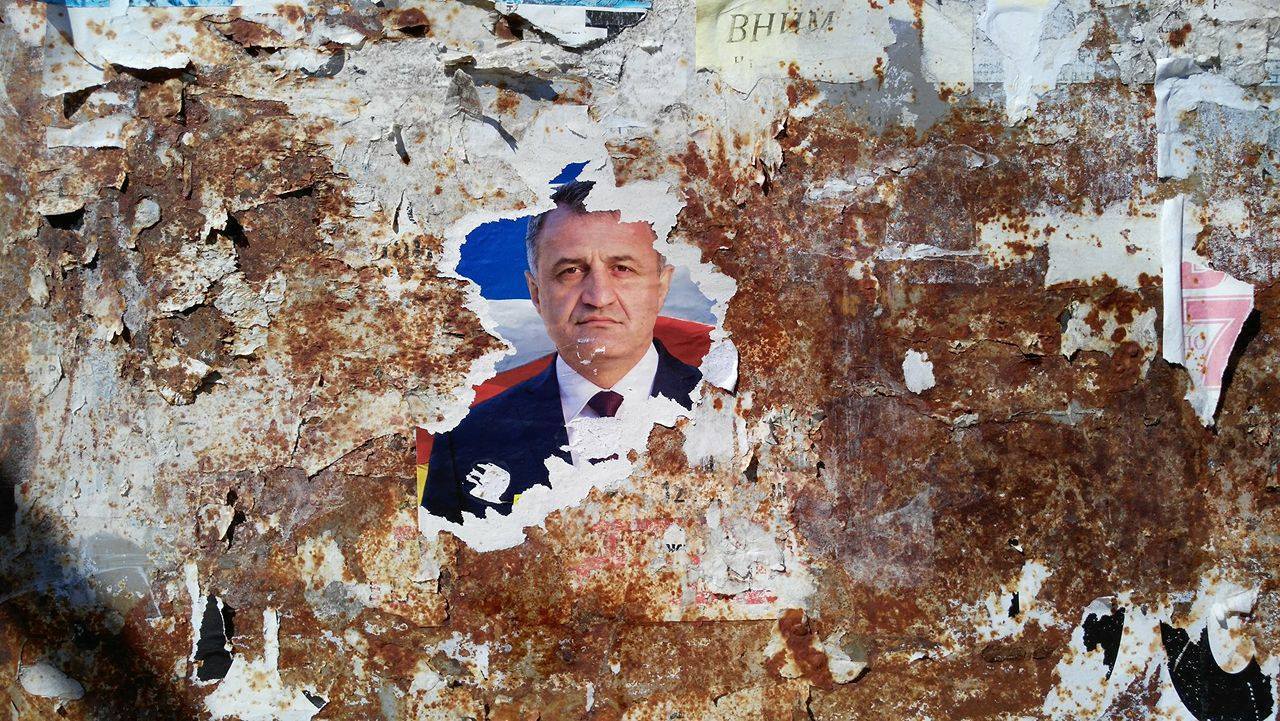 For many in Tskhinvali, the unexpected snow on election day evoked memories of the 2011 events known as “Snowy Revolution”, when another presidential election triggered a political crisis and street protests in South Ossetia.

Of course everyone understands that it’s not about apple orchards, obstetric centers, criminal weapons and even stolen millions. The most important argument of the contenders derives from their handshakes with prominent figures.

The incumbent President Tibilov is the undisputed leader of this competition. He’s arsenal contains 4 photos of President Putin in his pre-election leaflet, as well as with Prime Minister Medvedev, Patriarch of the Russian Orthodox Church Kirill, and musical director Valery Gergiev (one picture of each, so that no one gets offended).

Contender Tibilov answered that with just a photo of the chairman of the Federation Council of Russia, Valentina Matvienko, and a statement of meeting with her.

“The one that shakes hands with Putin becomes the boss” a political observation made by South Ossetian voter Stanislaw on 9 April 2017. The event took place in the settlement of Oktyabrsky, where one of the polling stations established in the republic were located.

The verification of voters’ documents were carried out in such a way that up to 300 people had already gathered by 12 o’clock at the entrance of the polling station (a cold, rainy and windy day wasn’t an impediment for the turnout). In an attempt to control it, it was necessary to have the presence of a ‘special purpose police unit’ (OMON) with regular police officers. In front of the polling station there was a van for transportation of the arrested, apparently the most ardent voters.

Stanislaw couldn’t decide up until the last moment between Bibilov and Tibilov (he didn’t even consider Gagloev as an option, saying that only the local criminals would be happy with his victory). Stanislaw was going to make his choice right in front of the ballot box.

Finally, he inclined towards President Tibilov.

Ultimately, he inclined in favor of President Tibilov, not so much because he likes him, but due to the fact that the former president Edward Katoity appeared on the side of Tibilov’s rival Bibilov. During the rule of Kakoity, Stanislaw was denied South Ossetian citizenship on the grounds of his being a Russian citizen. “I told him: ‘you yourself are a citizen of Russia!’ And he responded: ‘well, it’s me!’ ” said Stanislaw clarifying his choice of Tibilov. He, however, finished his story quite unexpectedly: “So now let Putin decide.”

Putin, perhaps, will decide the outcome of the elections. But there is a distinct feeling that he is doing that for the very last time. Not so much Putin himself, but any external power in relation to both South and North Ossetia.

25 years – the life cycle of a single generation. In our case, the last Soviet generation. It’s substituted by completely different people, with different life experiences and values. They will use concepts such as state sovereignty and electoral processes differently.

Two completely different people from Vladikavkaz – a well-known publicist Leonid Kochiev and a young IT specialist who is a native of South Ossetia, Soslan Tabuyev, have suddenly shared this opinion. Both believe that  April 2017 was the last time when people witnessed the post-Soviet style elections in South Ossetia. A new generation will require new leaders and new ideas.

P.S. We are hoping that liberation from fear will be the main news during the next elections in South Ossetia so that Stanislaw and other people that congregated on 9 April 2017 at the suburban polling station could openly say their names and speak up in front of the camera.

Zarina Khachirova was born in Tskhinval and is a citizen of South Ossetia. She was one of about 40,000 voters who queued outside the polling stations today, 9 April, waiting for their turn to cast their ballots to determine who would be the republic’s president for the next four years.

However, Zarina lives in Vladikavkaz in North Ossetia, not in Tskhinval. She works in a bookstore here and is a member of a local youth theatre’s cast. She moved to Vladikavkaz after getting herself enrolled into a local university to study theatrical performance, and has since lived here.